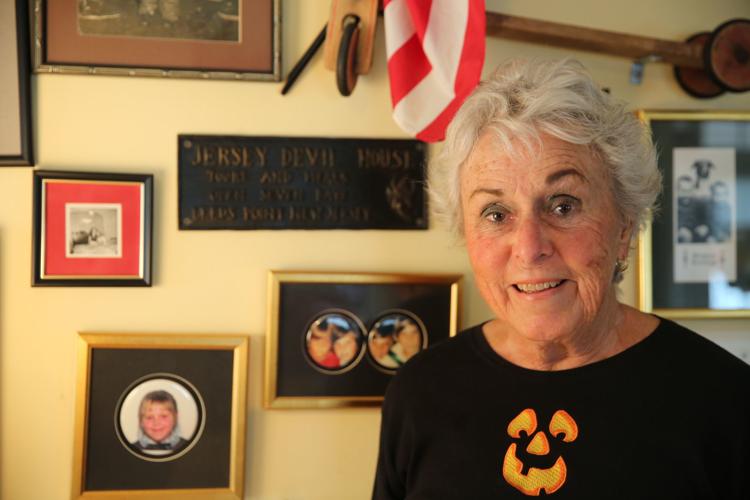 Jane Miller Glenn, 75, of Marmora, a direct descendant of the Leeds family from which the Jersey Devil supposedly came, keeps a photo of herself dressed as the creature hanging in her home, as well as a plaque that reads, ‘The Jersey Devil House. Tour and Meals. Open 7 Days. Leeds Point, New Jersey.’ 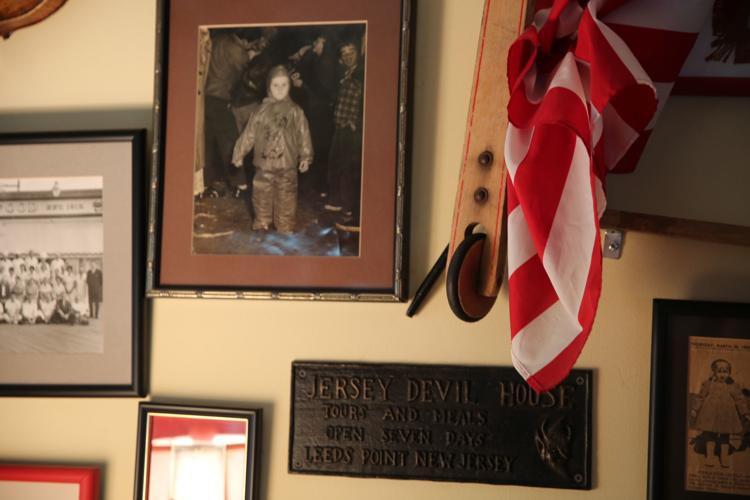 Jane Miller Glenn keeps a photo of herself dressed as the devil in the Ocean City parade hanging in her home, as well as a plaque that reads, "The Jersey Devil House. Tour and Meals. Open 7 Days. Leed Point, New Jersey." Her dad would tell her "the devil's coming out" of her when she was acting up, she said. 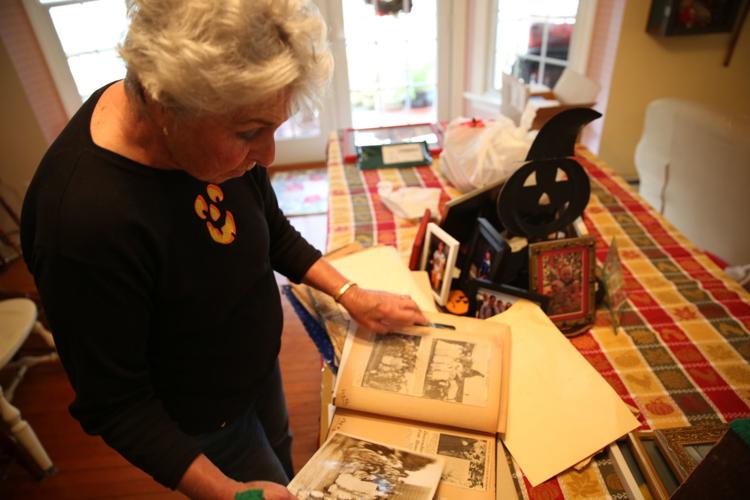 Jane Miller Glenn looks through the records and newspaper clippings she keeps of her Leeds ancestors on Oct. 29, 2019.

Jane Miller Glenn, 75, remembers her mom dressing her as a devil for the Ocean City Halloween parade when she was 3. Glenn, a direct descendant of the Leeds family from which the monster supposedly came, dressed her kids up as devils, and they dressed her grandchildren up as devils — three generations paying homage to their most famous forebear.

“Every one of the grandchildren, when they were little kids, it was kind of a customary thing that you had to do,” said Glenn’s daughter, Marcia McCulley.

The Jersey Devil, or Leeds Devil, has centuries of history in South Jersey, as does its namesake family. For Leeds’ descendants in Atlantic County, the state’s most famous cryptid has survived as a (usually tongue-in-cheek) fixture of family lore, a conversation piece, an icebreaker, and for some, like Glenn, a no-brainer Halloween costume. It’s even a reprimand when kids gets out of line.

“Probably it would come up in situations where someone was acting a little devilish,” said McCulley, 48, laughing. “I definitely think our family’s kind of spirited.”

As the Devil’s story is typically told, Deborah Leeds, or Mother Leeds, found out in 1735 she was carrying her 13th child and, out of frustration, cursed it. The baby was born on a stormy night in what is now called Leeds Point in Galloway Township and, before local midwives’ eyes, morphed into a fork-tailed monster. Now, a hoofed devil with the head of a goat (or horse) and the wings of a bat haunts the Pine Barrens with its high-pitched scream, leaving only to prey on farm animals and thrill-seeking campers, or to puzzle lonely motorists speeding by it on desolate back roads.

“Anybody that’s from South Jersey ... born and raised ... knows about the Jersey Devil,” Glenn said.

The Leeds Devil was the subject of breathless accounts in turn-of-the-century newspapers, and some research holds that Benjamin Franklin invented the creature to smear a rival almanac publisher, Titan Leeds, a theory floated by Brian Regis and Frank J. Esposito in their book “The Secret History of the Jersey Devil.”

The Leedses arrived from England in the 1670s. Mother Leeds’ grandson Jeremiah Leeds settled on Absecon Island in 1785 and soon thereafter built the first permanent structure on what would later become Atlantic City. He owned 1,000 acres of the island before his death. His son Robert was the first postmaster of Atlantic City, and his son Chalkley, Glenn’s great-grandfather, was the first mayor.

Glenn, of Marmora, keeps a photo of herself dressed as the Devil in the Ocean City parade hanging in her home. Her dad would tell her “the devil’s coming out” of her when she was acting up, she said.

Norman Goos, 73, a historian with the Atlantic County Historical Society and a Leeds descendant on his mother’s side, got a similar treatment as Glenn from his elders. When his grandfather wanted to let Norman know he was “making a fool of (himself)” without alerting anyone else, he had a silent signal: He’d make devil horns with his fingers on his head. Translation: You’re acting like your distant demonic relative.

Another descendant, Kelly Leeds Billings, 40, of Galloway, said her father talked about the Jersey Devil in a way that emphasized its familiarity and not its terrifying nature. You’re family, he said, so the Devil won’t hurt you. She’s carried that forward with her kids.

“’The Jersey Devil is our cousin,’” Billings quoted her father, laughing. “’So all your friends can be scared of him, but you don’t have to be.’”

Billings used to live on Moss Mill Road. Tourists looking for the Devil would often stop by to ask whether the Leeds House was nearby, and she’d direct them down the road, she said.

One of the most vocal Leeds descendants, Harry Leeds, a former Galloway mayor, could be to thank for that attention. He was a frequent and eager liaison for TV documentaries that came to the area in search of the Devil.

The more shows he was featured on, the more he leaned into an elaborate caricature of a “Piney,” said journalist Bill Sprouse, 43, who wrote “The Domestic Life of the Jersey Devil” and runs the online news magazine rtforty.com with his wife, journalist Elinor Comlay.

For a stretch of the area’s history, the Jersey Devil fed into the mystery and uncertainty outsiders felt about the Pine Barrens and the people who called the area home. Harry Leeds, besides promoting his community, gave producers what they wanted, an updated take on an age-old gut feeling: Something is off down here.

“He knew kind of what they wanted, and where to take them, and he could sort of play this role of like a Piney that they needed, a witness,” Sprouse said. “In the beginning they would put his name up on the screen and it would say like, ‘Harry Leeds, Mayor of Galloway,’ ... ‘Harry Leeds, a direct descendant of Mother Leeds.’ And by the end, it was just like, ‘Harry, witness.’”

Sprouse himself is a Leeds descendant and a critic of the way the legend has spread without proper debunking. His grandmother, a “funny, cool old lady” and a descendant of Mother Leeds, shared it with him and his cousins, treating it as a funny story.

Researching for his book, he flipped through the phone book and called all the Leedses he found. The family’s longevity in the area struck him more than anything. The Leeds name is ubiquitous in Atlantic County. A cursory look through area cemeteries only cements that fact.

“That was something that hit me as I was doing this project,” Sprouse said. “Daniel Leeds went to what is Leeds Point (from England) in the 1690s ... My grandmother was born basically a couple hundreds yards from where this guy had his plantation. ... I thought New Jersey was uniquely ahistorical.”

For all his journalistic rigor, Sprouse’s relation to the Jersey Devil still worked as a handy icebreaker in school, and as proof the Devil’s reach goes way beyond its home state.

“It didn’t seem unusual, necessarily, until I left New Jersey, went off to college and worked other places,” he said. “Because around here, it’s just sort of in the water supply.”

PHOTOS from Halloween parade at the Glenwood Avenue School

Most curse words have a common feature no matter what language

Most curse words have a common feature no matter what language

Jane Miller Glenn, 75, of Marmora, a direct descendant of the Leeds family from which the Jersey Devil supposedly came, keeps a photo of herself dressed as the creature hanging in her home, as well as a plaque that reads, ‘The Jersey Devil House. Tour and Meals. Open 7 Days. Leeds Point, New Jersey.’

Jane Miller Glenn keeps a photo of herself dressed as the devil in the Ocean City parade hanging in her home, as well as a plaque that reads, "The Jersey Devil House. Tour and Meals. Open 7 Days. Leed Point, New Jersey." Her dad would tell her "the devil's coming out" of her when she was acting up, she said.

Jane Miller Glenn looks through the records and newspaper clippings she keeps of her Leeds ancestors on Oct. 29, 2019.