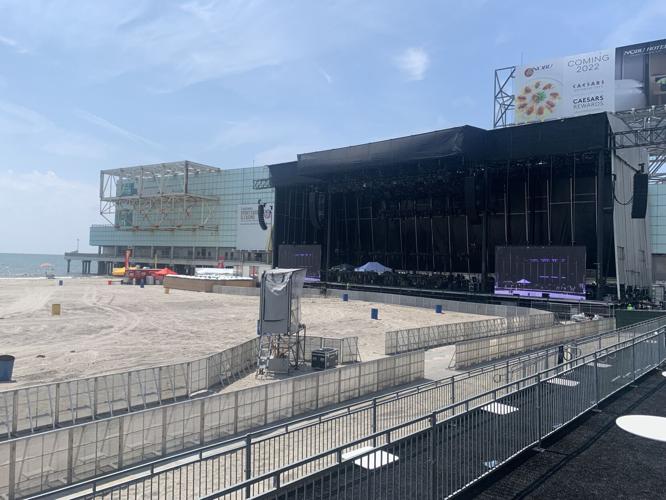 The jam band Phish is performing for the second straight year on the Atlantic City beach. Some of country music’s biggest stars will then perform there next weekend at the TidalWave Music Festival. 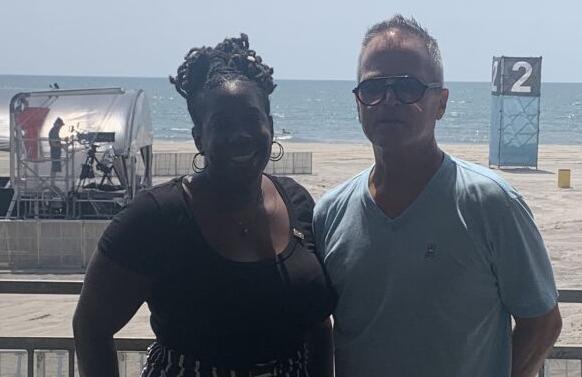 ATLANTIC CITY — Tens of thousands of music fans from all over the country are expected to flock here over the next two weeks for two major music events.

“This is probably the most exciting weekend I have professionally every year,” Geoff Gordon, regional president of Live Nation, the promotional group that is putting this weekend’s concerts on, said during a media event Friday. “To be able to do two shows on the beach is unbelievable.”

For the second straight year, the rock band Phish will perform a three-day run of shows on the beach near Arkansas Avenue. The first show was expected to kick off Friday night.

After this weekend’s concerts, organizers will have a quick turnaround to prepare for the inaugural TidalWave Music Festival set to begin next Friday. The TidalWave Festival will run through next Sunday, Aug. 14.

Nearly 100 workers were on hand Friday to put the finishing touches on the 80-foot by 20-foot stage, as well installing lights, sound systems and other equipment for the Phish shows.

Gordon said it takes nearly 10 days to construct it all and then seven days to tear it all down. It takes a couple hundred people ranging from security, organized labor and caterers to make the events possible.

The two events are presented by Live Nation and Country Nation in partnership with the city of Atlantic City and the Casino Reinvestment Development Authority (CRDA).

Maisha Moore, CRDA’s deputy executive director, said she is excited to have the two events in town.

“We’re trying to appeal to the visitors and to the locals as well,” Moore said. “So having different diversities here in the city and hosting events like a country music festival is beneficial because it’s going to bring in a new wave of people that have never been here before, and it’s going to be an awesome experience.”

CRDA helped Live Nation with grant money that was needed to fund the events.

This will be the fifth time Phish performs in the resort. The band played three shows each in 2010 and 2013 at Jim Whelan Boardwalk Hall and three shows in 2012 at Bader Field.

Last year’s shows on the beach attracted about 30,000 people each night, according to Gordon.

“That’s about the right number. That’s normally what the cap is,” Gordon said. “We should be pretty close to the same thing, and the weather looks good. It’s about 15 degrees cooler here than inland, so I suggest for anybody to come down and enjoy the weather and some great music on the beach.”

The event will also have a big security presence, said Acting Chief of the Atlantic City Police James Sarkos.

“We have hosted Phish concerts and Live Nation for several summers. We have a very good security plan that is very extensive. The planning starts six months ahead,” Sarkos said.

Atlantic City is also no stranger to hosting country music acts. Notable artists including Brantley Gilbert and the Zac Brown Band have brought some country flair to the beach in the past.

The success of those individual shows, the Phish concerts and Live Nation’s annual Tortuga Country Music Festival in Fort Lauderdale, Florida, sparked the idea to have a country music festival in Atlantic City.

“I said, ‘We should put something on that is similar to Tortuga up north during the summer months,” Gordon said.

Organizers also have partnered with the nonprofit organization Rock The Ocean, which focuses on raising awareness and funds for ocean conservation. The festival will feature multiple stages and a conservation village in which attendees can learn about ways to take better care of the ocean.

Gordon said the turnaround won’t from one set of concerts to another won’t be too much work.

“A lot of the main structures are going to stay the same. It’s just going from a Phish vibe to a country vibe,” Gordon finalized.

ATLANTIC CITY — Bill Butler, who is homeless, was awake at 7 a.m. on Monday when he and about 20 others were abruptly visited by city official…

GALLOWAY TOWNSHIP — Plans to build an Amazon delivery facility in the township appear to have been shelved, dampening hopes of bringing the on…

Thousands turn out to see Phish on Atlantic City beach

New Jersey Superior Court Judge Michael Blee has ordered the state to make an immediate payment of $2.36 million to Atlantic County, and more …

AC Airport will be OK, regardless of Spirit - JetBlue deal fallout, analysts say

If a proposed merger between low-cost Spirit Airlines and the pricier JetBlue Airways happens, service at Atlantic City International Airport …

The jam band Phish is performing for the second straight year on the Atlantic City beach. Some of country music’s biggest stars will then perform there next weekend at the TidalWave Music Festival.