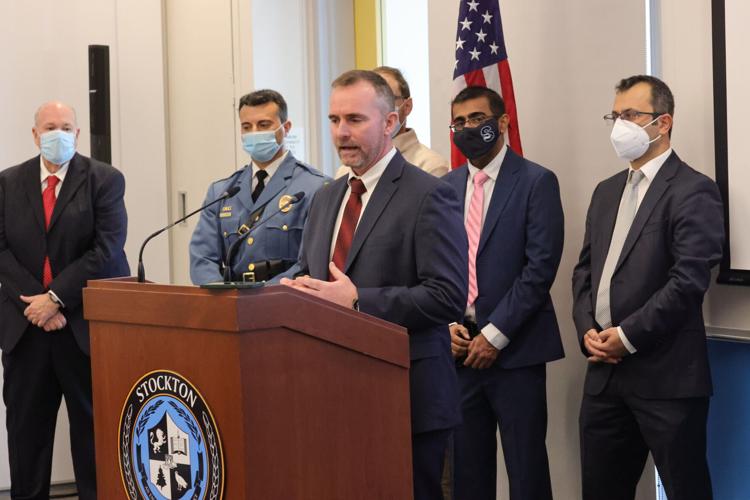 Pleasantville Chief of Police Sean Riggins speaks at the news conference about the new Policing Intervention Project in Atlantic City. 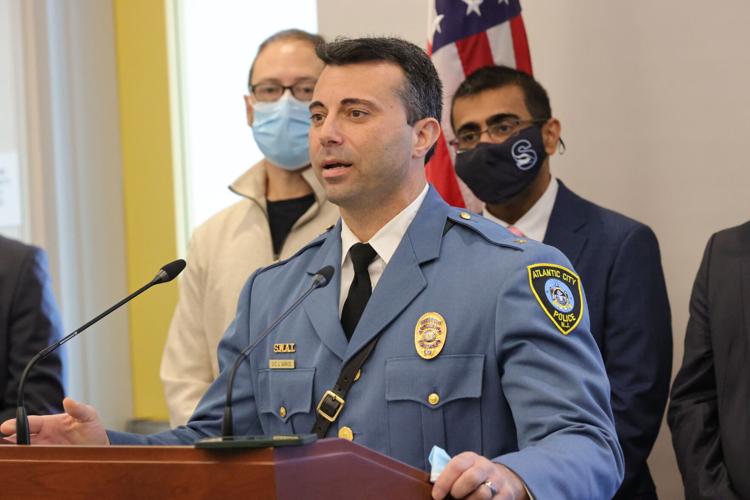 A new federal grant is putting Atlantic City, Pleasantville, and Stockton at the forefront of police reform in the United States.

The U.S. Department of Justice awarded Stockton University a $700,000 grant to implement and evaluate new police intervention tactics in Atlantic City and Pleasantville, the university announced at a news conference Monday.

Only three to five institutions a year are awarded this competitive DOJ grant, said Stockton Assistant Professor of Criminal Justice Nusret Sahin, the principal investigator on the study. He said the study’s goal is to investigate ways to make police more accountable to the communities they serve.

“It includes an intervention combined with best of procedural justice practices, with utilization of body-worn-camera footage to increase the transparency and accountability of police agencies,” Sahin said. “We believe that this approach will improve police practices, especially during traffic stops.”

The project, done in conjunction with the Atlantic City and Pleasantville police departments, will release body-camera video of traffic stops and have drivers and pedestrians provided with evidence of why police conduct traffic stops at certain locations. Researchers will then interview drivers and pedestrians who were stopped and ask them to complete a 31-question survey on paper or online to evaluate the interaction.

The response of the two groups will be compared to evaluate the effect that the new procedures have on police-civilian relations.

“We believe that, with this new intervention, citizens will be better informed about traffic-enforcement practices, they will feel that the police make them part of the process, and will give them an opportunity to voice their opinions given their initial interaction,” Sahin said. “We anticipate that this protocol will increase compliance, citizen satisfaction, and perceptions of trust and confidence in the police department.”

Procedural justice is the utilization of police procedures during minor police-civilian interactions to improve public trust in law enforcement.

Sahin has previous experience working with the Atlantic City and Pleasantville police departments, where he has helped organize training on procedural justice. He also worked for the Turkish National Police for 13 years, and has published research about the use of procedural justice in Turkey.

Four of the seven professors listed as grant participants are criminal justice professors or instructors from Stockton, including Sahin. The team also includes Marissa Levy, the dean of the Stockton University School of Behavioral Sciences; Northwestern University Assistant Professor of Linguistics Rob Voigt; and Joel Caplan, a professor at the Rutgers University School of Criminal Justice.

Levy said the partnership with Voigt from Northwestern and Caplan from Rutgers was crucial in helping advance the goals of the study and “making sure that we have the best eyes and ears to help our community partners and to bring procedural-justice practices here to Atlantic County and to others.”

Pleasantville Police Chief Sean Riggins shared Levy’s enthusiasm for the team assembled for the study. Riggins said he was “struck” by the people his department had the opportunity to collaborate with, and believed the study would strengthen police-community relations in Pleasantville.

“I’m struck by the caliber of the people that are involved in this project,” Riggins said. “I think it’s going to be really transformative for law enforcement moving forward, and we’re just really happy to be a part of it.”

The planned Stockton study will take place against the backdrop of a nationwide movement protesting police brutality in the United States, particularly against Black men. The murder of George Floyd last year sparked protests that lasted through much of 2020, and created a new sense of urgency around achieving police reform.

Caplan, of Rutgers, mentioned the Stockton study was delving into “a very important topic at an important time in our lives and in the world.”

Sarkos agreed with Caplan’s assessment, saying this police reform study “could not be more important and timely than right now here in our country.”

The study, which will focus on a total of 2,000 traffic stops, will take place over an 18-month period expected to begin in the summer of 2022.

Pleasantville school board at odds over solicitor

The city Board of Education was slated to vote Tuesday to replace the board’s current solicitor, Lester Taylor, whose termination is set to ta…

Increased prices and demand for turkeys this year ahead of Thanksgiving have presented challenges to local food banks and their community partners.

ATLANTIC CITY — A line of more than 200 people wrapped around the block Thursday morning on North New York Avenue.

PLEASANTVILLE — After voting to fire its solicitor last month, the local school board will wait at least a week longer to appoint a replacement.

In this era focused on the interaction of police and the public, solid work in Atlantic County has shown how to improve that relationship to t…

Unbelievable! This is the moment after a gunman opened fire in a crowd in Philadelphia

Pleasantville Chief of Police Sean Riggins speaks at the news conference about the new Policing Intervention Project in Atlantic City.