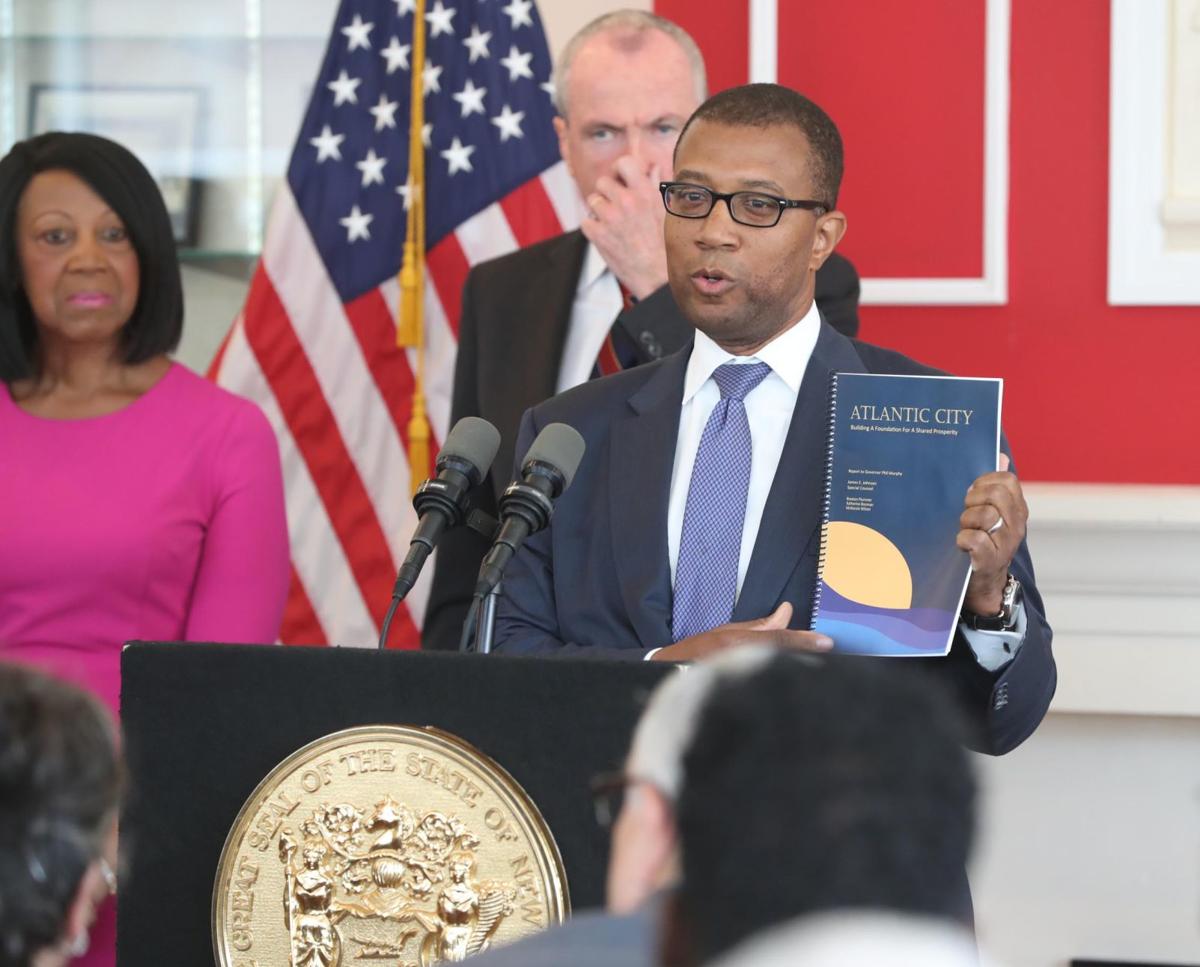 Jim Johnson’s report, released Thursday during a news conference at the Richmond Avenue School in Atlantic City, recommends the state continue overseeing the city’s finances through 2021. 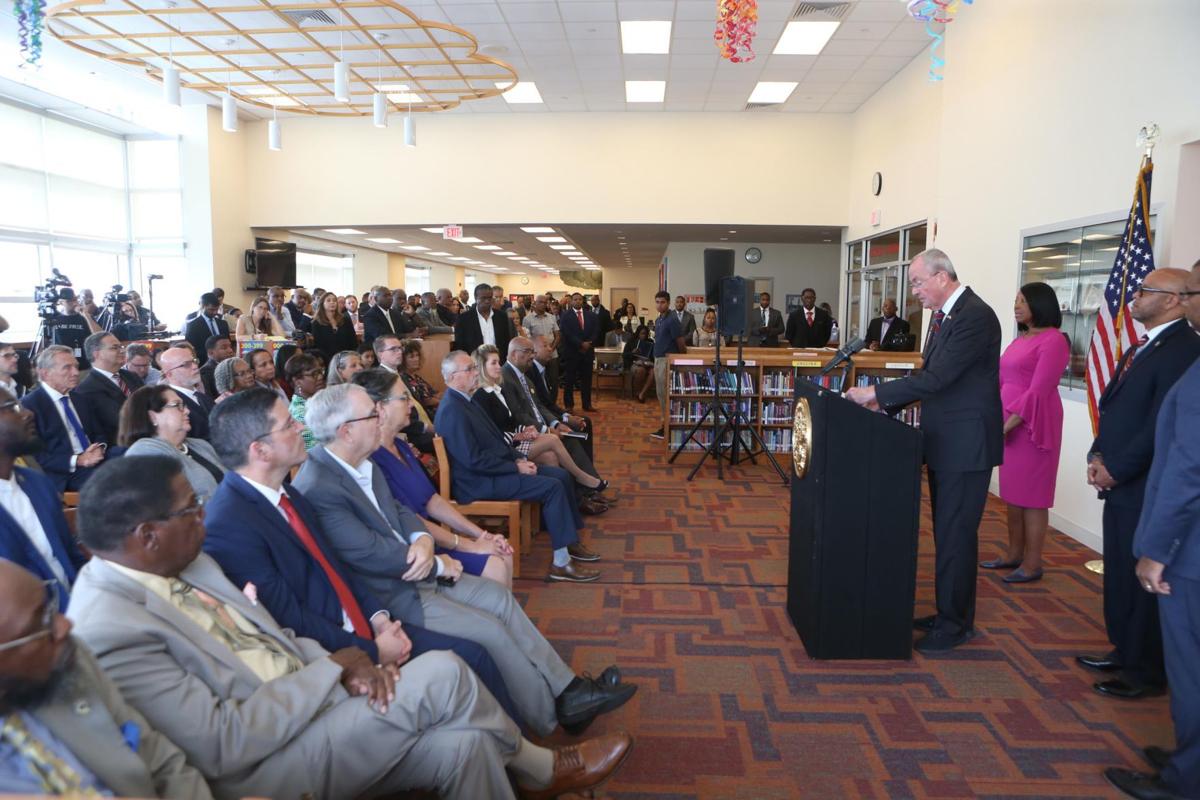 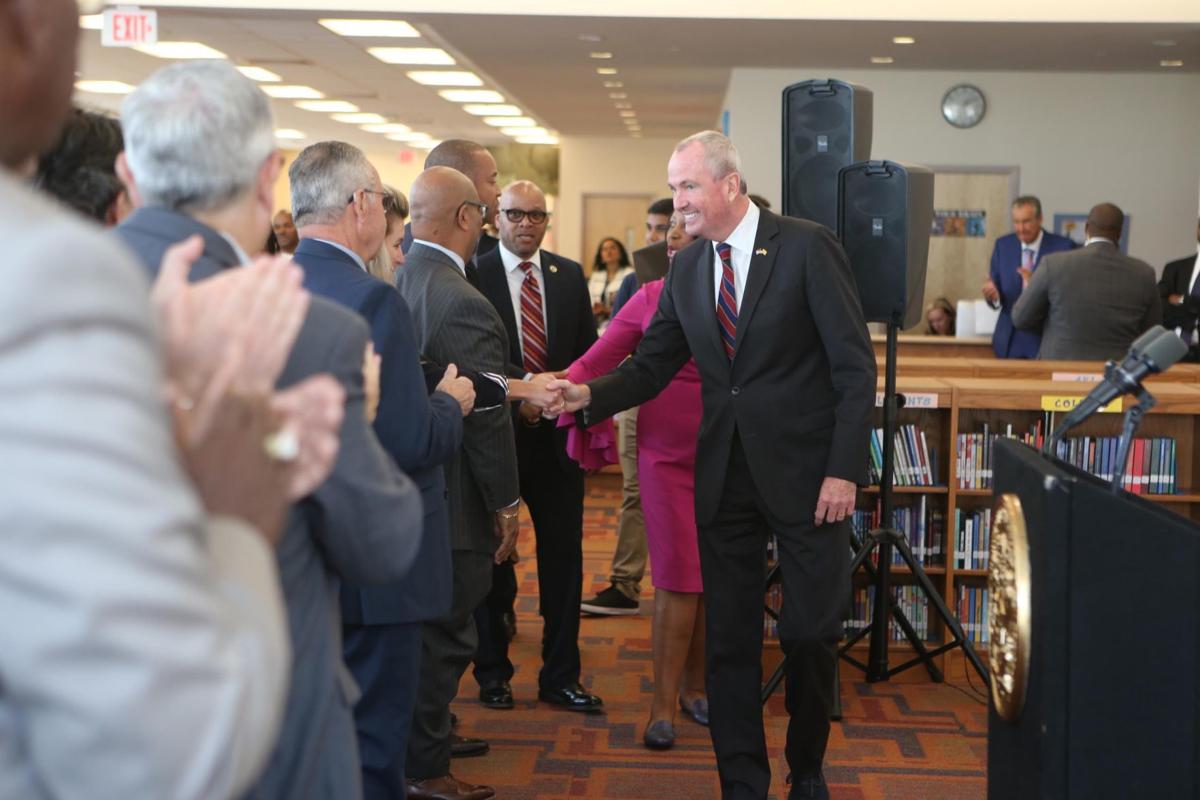 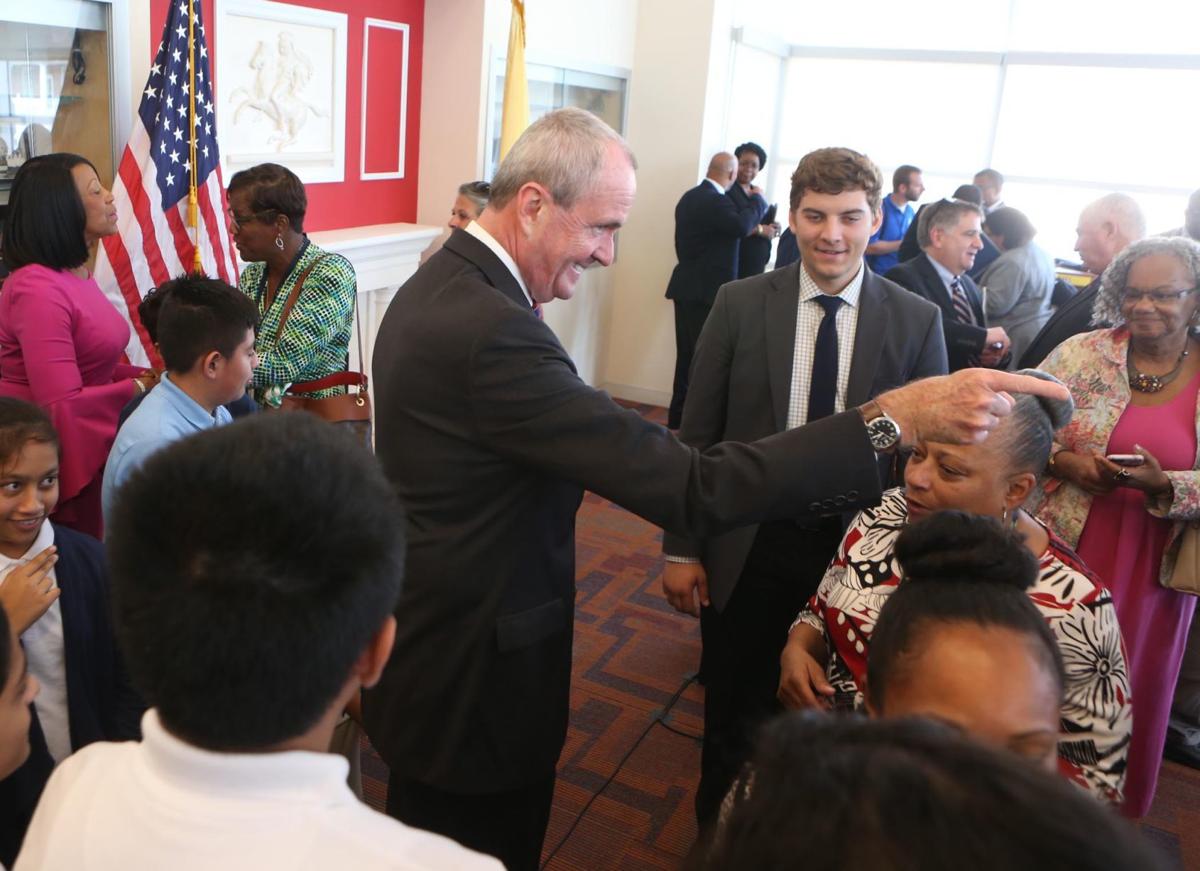 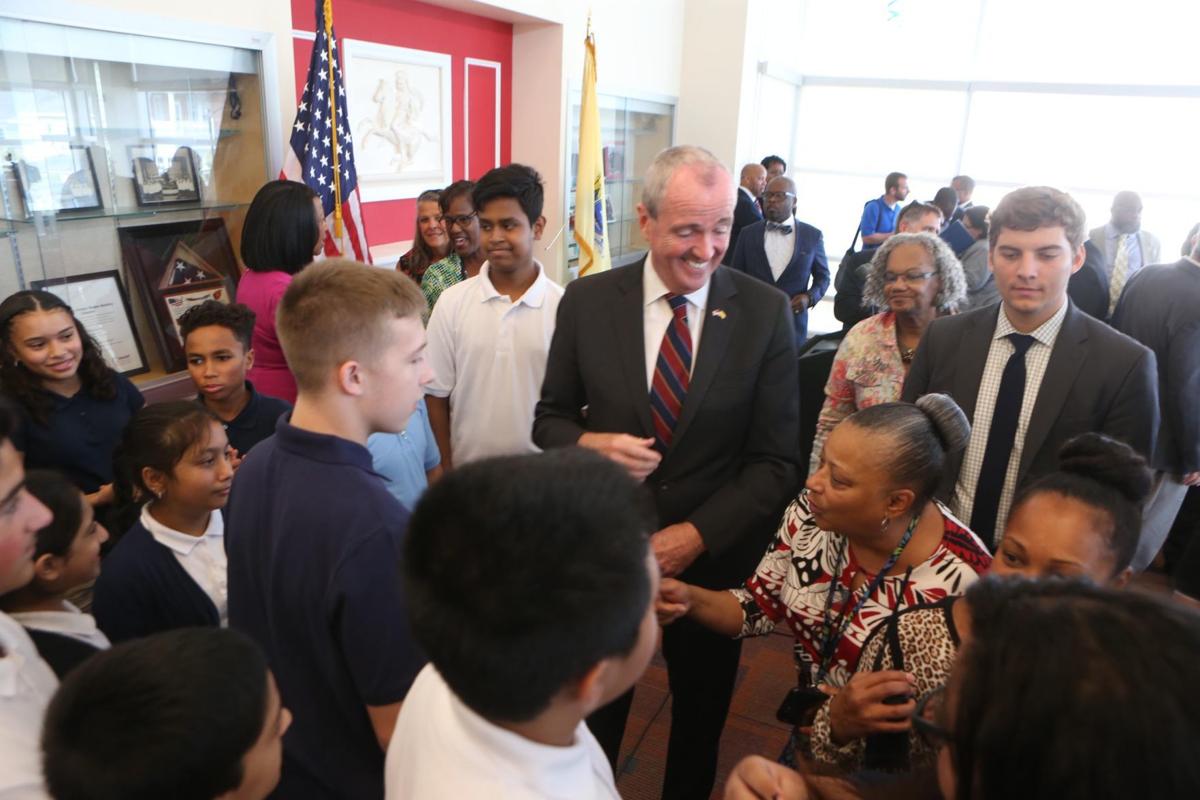 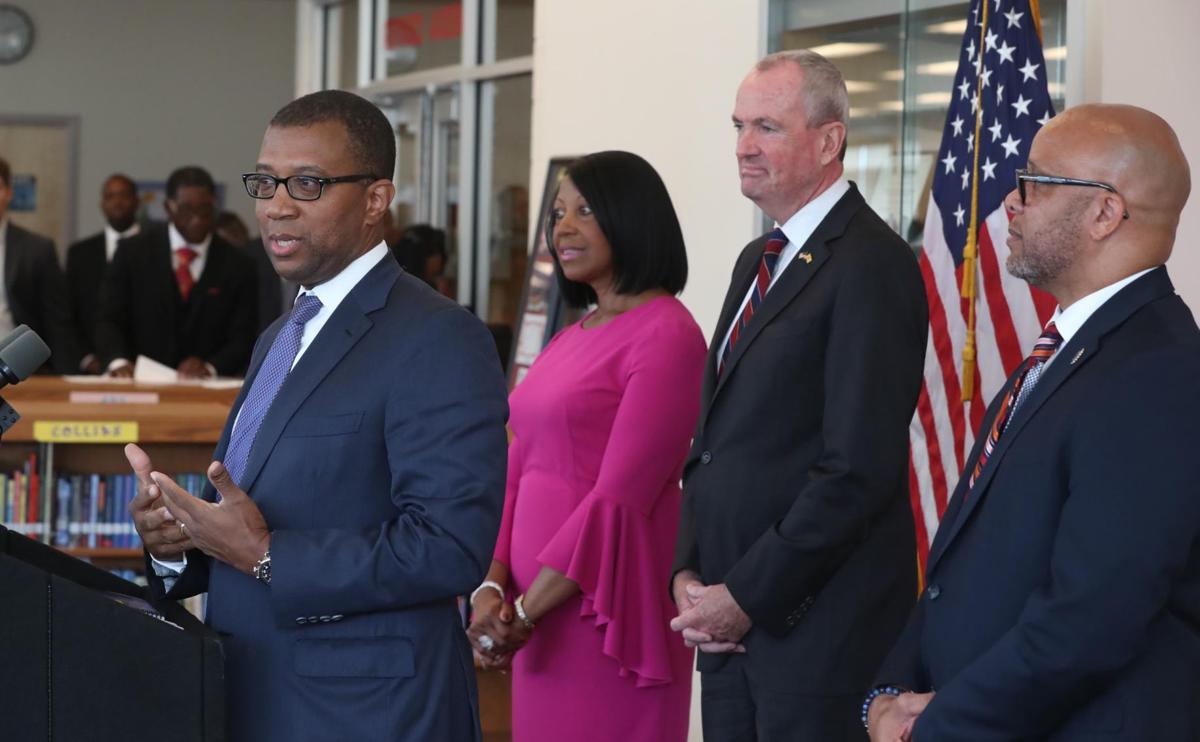 ‘Silos and silver bullets,’ was how report author Jim Johnson, left, a former U.S. Treasury undersecretary, referred to the lack of collaboration and long-term planning at the Casino Reinvestment Development Authority. 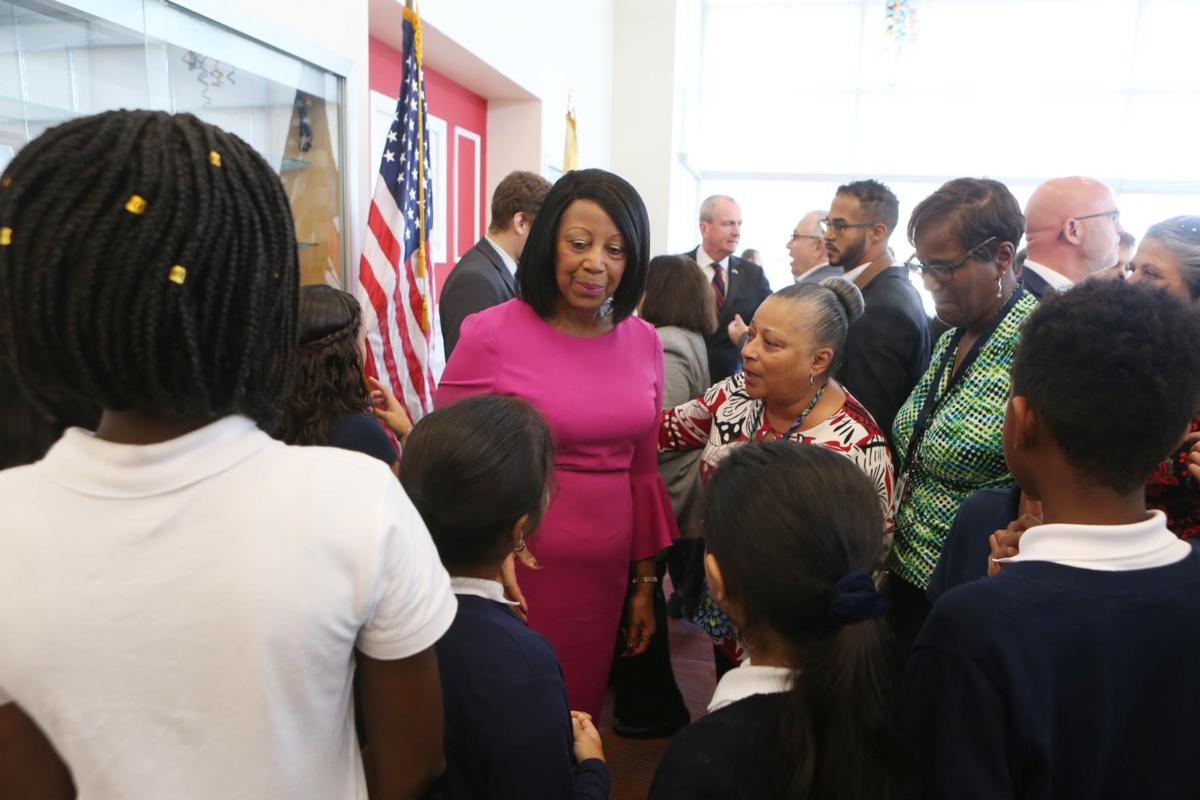 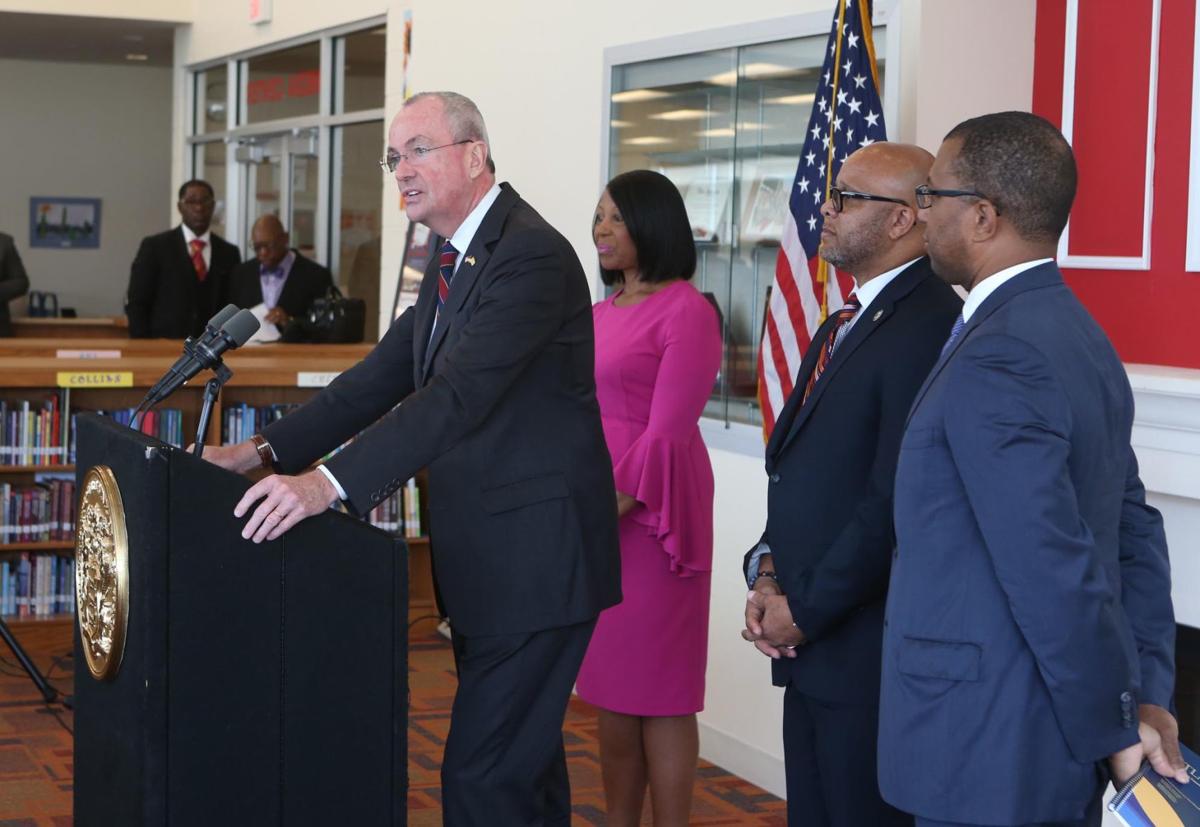 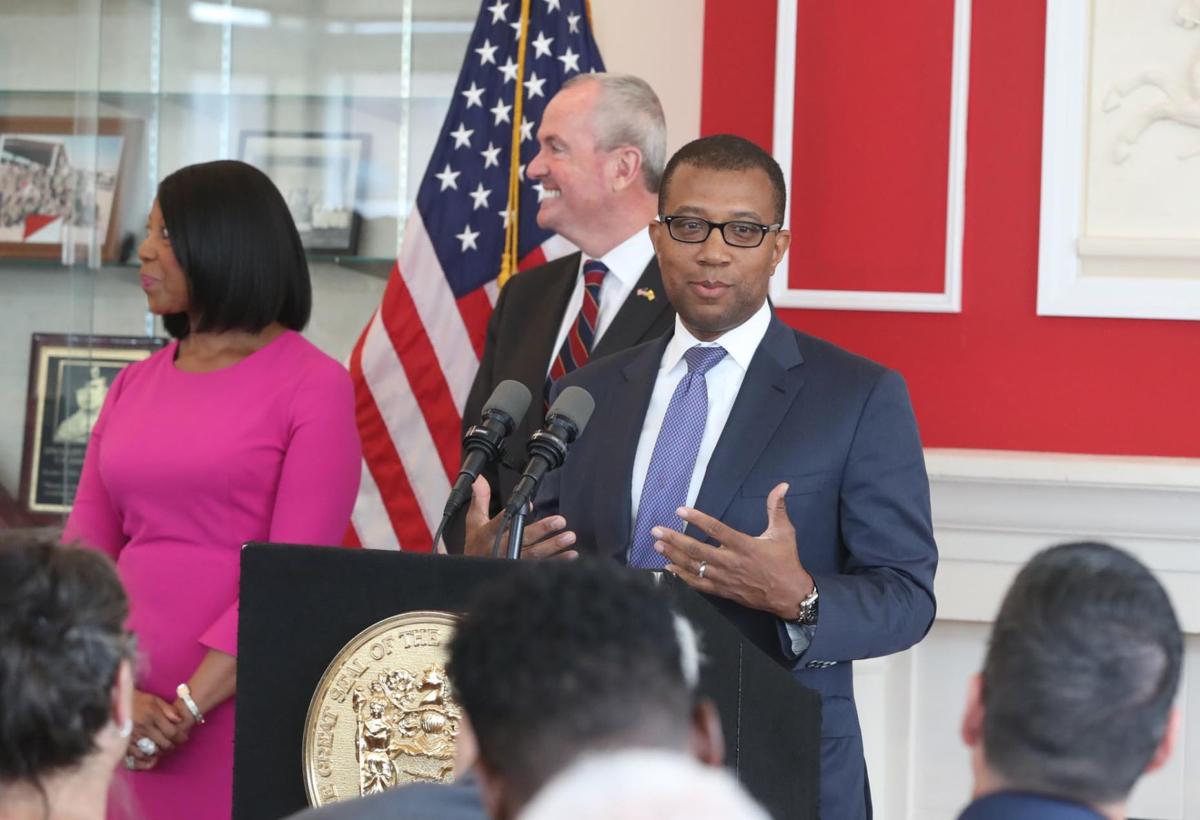 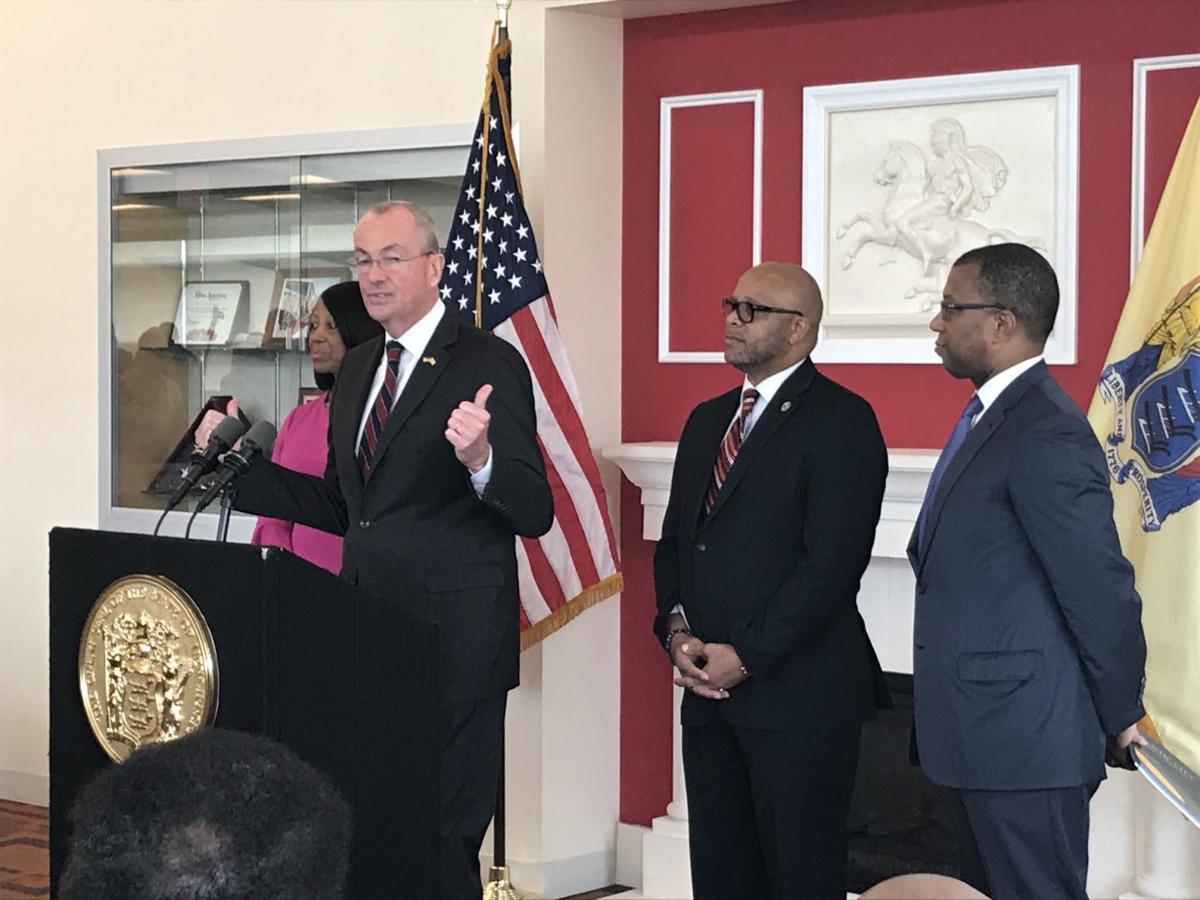 The resort will continue to be under state oversight, according to a report from state Special Council Jim Johnson.

ATLANTIC CITY — The state will continue its oversight of the city until government, civic engagement and community partnerships improve, according to a report from the governor’s appointed special counsel.

The long-awaited report from Jim Johnson, a former U.S. Treasury undersecretary and 2017 Democratic gubernatorial candidate, was released Thursday and recommends the state continue in its role overseeing Atlantic City through 2021, while working with local entities to enhance the resort’s outlook.

“The citizens of Atlantic City deserve to have their local elected officials control their destiny,” said Mayor Frank Gilliam. “I am very optimistic that this is a huge step in the right direction for Atlantic City and its future.”

Johnson’s report lists several recommendations for city and state officials as well as a plan for implementing them. 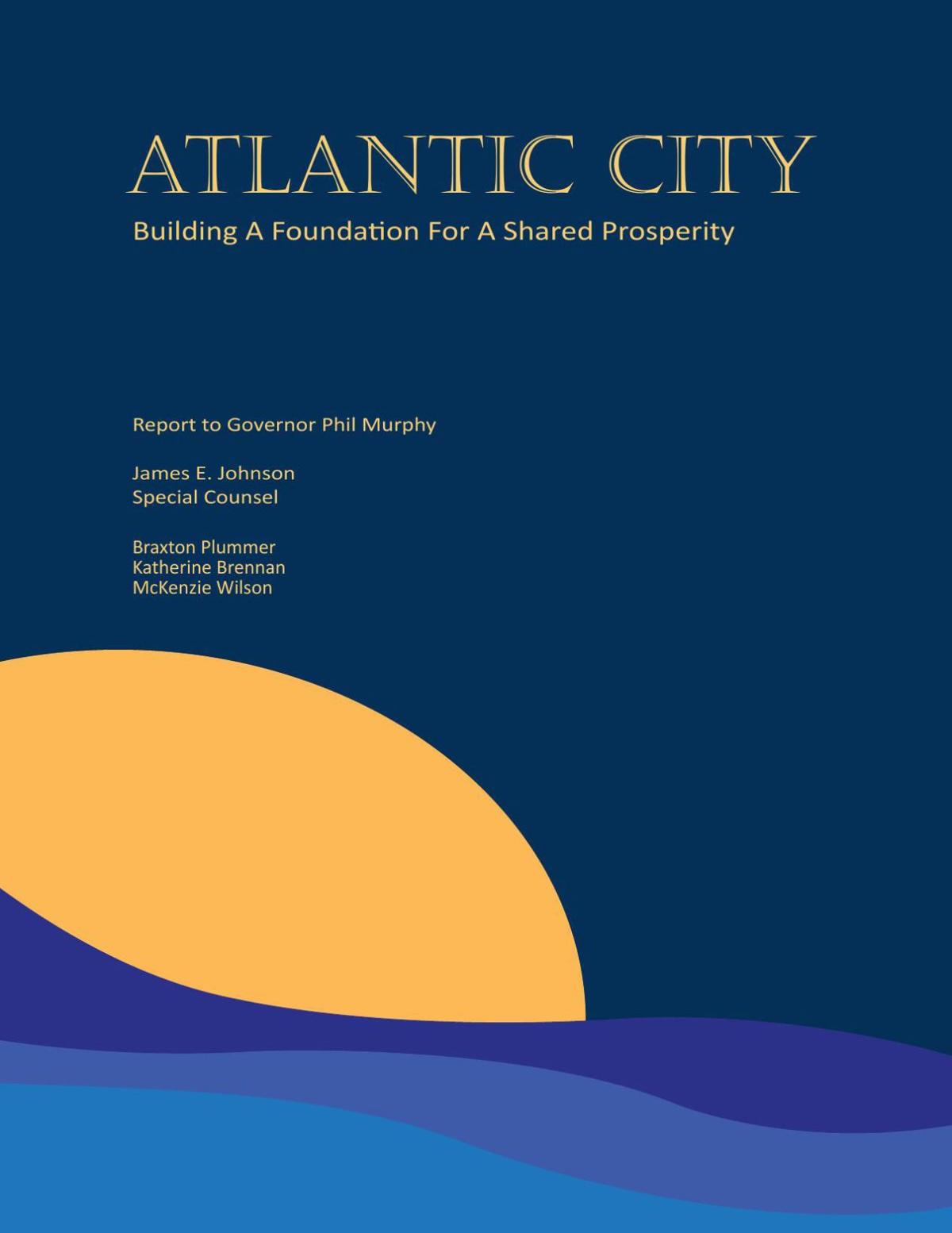 “In order to accomplish these initiatives, Atlantic City must reject approaches based on silos and silver bullets and work to develop in a broad, inclusive and comprehensive way,” Johnson said. “Stakeholders in the city will have to do many things well, but they don’t have to do them all at once.”

Gov. Phil Murphy, who appointed Johnson in February, said the report’s recommendations were made independently and many are still under review by the administration, but he emphasized his support for the final product.

“This report goes beyond Atlantic City’s finances and outlines tasks to address chronic issues so that everyone can share in the new opportunities emerging in the city,” Murphy said. “Without a doubt, positive things are happening in Atlantic City. However, if we want to see today’s progress endure long into the future, we have to tackle longstanding challenges such as poverty, unemployment, affordable housing and public health. Most importantly, we must invest in the people who live and work here.”

In order for local control to be fully returned to Atlantic City’s elected officials before the statutorily defined five years, state legislative action in the form of an amendment to the Municipal Stabilization and Recovery Act would need to be passed.

Murphy, who campaigned on ending the state takeover enacted in 2016 by his predecessor, former Gov. Chris Christie, said his administration is committed to a “partnership” with city officials.

“We can do tremendous things in Atlantic City, but only if we do them working together and only if we focus on broadening the economy,” said Lt. Gov. Sheila Oliver.

The report’s recommendations include:

• Focusing on the fundamentals of local government by building the capacity and talent of municipal employees through training and better technology to deliver essential services, respond to constituent concerns, collect more revenue and plan for development and growth

• Building a diverse economy by supporting the stability of the gaming industry, developing jobs with the potential for growth and higher wages, supporting the health of small businesses and creating career ladders within the casino industry

• Improving amenities that affect residents’ quality of life and can attract new residents by developing strategic projects such as a food market, walkable neighborhoods, and after-school and summer programs for children

A key component in successfully executing the plan’s recommendations is better coordination among the city’s various entities, namely City Council, the Casino Reinvestment Development Authority and the state Department of Community Affairs, which presently has oversight over the day-to-day functions of government.

The transitional report’s review team proposed the creation of a state coordinating council to implement the recommendations and keep people “on task and accountable for results.”

Oliver, who is also the head of the DCA, said the department would be creating a dedicated Atlantic City project office in the resort for that purpose.

“We’re not going away,” Murphy said. “We’re going to go out and execute this plan.”

TETERBORO, N.J. (AP) — Authorities say a New York woman who breached security at New Jersey airport and drove her car across two runways has b…

A previous version of this story incorrectly stated that Stockton was applying for the liquor license extension. Chartwells, the university’s …

ATLANTIC CITY — Responding to one of several recommendations made in the state’s report of the city takeover, the Casino Reinvestment Developm…

ATLANTIC CITY — In order for the resort to re-establish itself as a world-class destination, city officials say main thoroughfares must be cle…

Murphy, Oliver scheduled to be back in Atlantic City Tuesday

ATLANTIC CITY — Gov. Phil Murphy sounded a lot like candidate Murphy at the annual Housing and Economic Development conference where he touted…

ATLANTIC CITY — Mothers with their babies, children, parents, partners and friends sat at round tables adorned with pink and blue balloons as …

ATLANTIC CITY — Bad relationships with leaders in his own party, a weak response to sexual assault allegations against a staff member and unpr…

ATLANTIC CITY — The newly formed Executive Council operates behind closed doors, but several members are open to the possibility of allowing m…

ATLANTIC CITY — AtlantiCare may build a $38 million HealthPark next to its Atlantic City campus, with the help of the Casino Reinvestment Deve…

ATLANTIC CITY — Nearly a year ago, Alyssa Spruill was at a prenatal visit with her doctor when she learned she would have to deliver her baby …

ATLANTIC CITY — The city is making incremental progress toward economic stability, but its long-term fiscal health remains a cause for concern.

ATLANTIC CITY — Six months after its formation, the Atlantic City Executive Council is close to finalizing a strategy designed to keep the pub…

'Lot of ifs' about state leaving Atlantic City in 2021

ATLANTIC CITY — Since the state assumed control of the city in late 2016, the big question on the minds of officials and residents is whether …

New man at the top overseeing Atlantic City for the state

ATLANTIC CITY — The state official responsible for the supervision of the city’s government is voluntarily leaving his position next month, an…

ATLANTIC CITY — The law office of the former state designee billed more than $5.1 million since 2016 for legal services related to the stabili…

Jim Johnson’s report, released Thursday during a news conference at the Richmond Avenue School in Atlantic City, recommends the state continue overseeing the city’s finances through 2021.

‘Silos and silver bullets,’ was how report author Jim Johnson, left, a former U.S. Treasury undersecretary, referred to the lack of collaboration and long-term planning at the Casino Reinvestment Development Authority.

The resort will continue to be under state oversight, according to a report from state Special Council Jim Johnson.