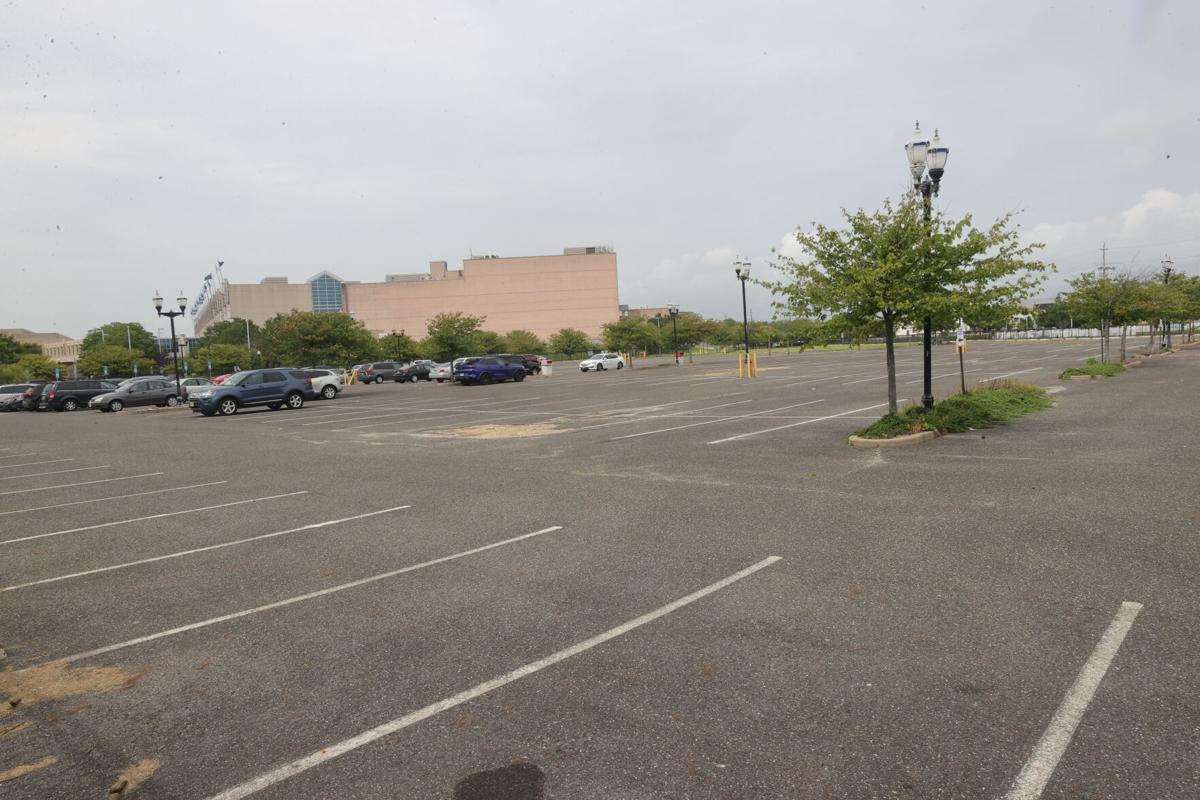 CRDA is getting ready to vote on the a new ShopRite to be built between North Ohio and North Indiana avenues. 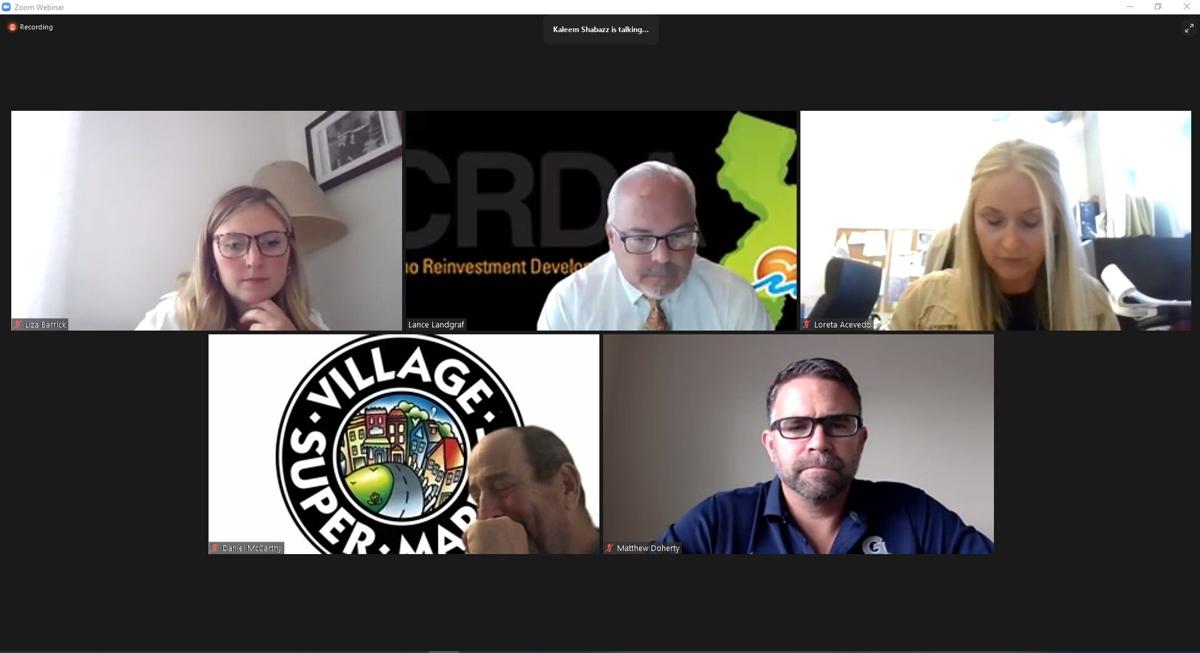 Representatives of the Casino Reinvestment Development Authority and of Village Supermarket Inc. discuss a proposal for a new supermarket in Atlantic City in a remotely held public hearing Wednesday. The authority plans to put $18.7 million into the project.

ATLANTIC CITY — Village Supermarket Inc. will pay $1 a year to operate a ShopRite in Atlantic City, staff members with the Casino Reinvestment Development Authority said Wednesday during a public hearing.

That would still put the annual cost of the contract under the sale price of a single 18-ounce bag of Bowl & Basket potato chips or 8 ounces of Kraft shredded cheese listed in this week’s circular for the Absecon ShopRite location.

Supermarket representatives said at the hearing that without public funding, the project would not happen.

In September, the CRDA’s Board of Directors approved a site plan for the project. On Oct. 19, the board will consider the next step; a contract with the company for the operation of the new supermarket.

Wednesday’s hearing, held remotely, was part of the process of bringing that agreement to the full 17-member board. The plan received full-throated support from some people at the hearing, and skepticism from others. Supporters see an end to Atlantic City’s status as a food desert. Critics agree a supermarket is needed but want more guarantees of benefits to the local community and want those benefits outlined in an agreement before the project takes another step.

GALLOWAY TOWNSHIP — ShopRite donated more than $1.5 million to nonprofits during an LPGA Cla…

CRDA plans to put $18.7 million into the project and retain ownership of the building and the interior. The supermarket chain will own the groceries and fund the operation of the store.

That is similar to the construction and outfitting costs for other supermarket protects, according to Daniel J. McCarthy, an attorney representing Village Supermarket Inc.

“It’s in the ballpark,” he said. At the public meeting, he said the company builds first-class supermarkets, and that’s what will be built in Atlantic City.

But in this case, it will be the CRDA funding the construction. Doherty presented that as a positive for Atlantic City.

“The building and the property will remain the property of the CRDA,” he said. He cited another CRDA project, Renaissance Plaza, which he indicated has not been well maintained, saying the authority has no control over the maintenance.

“You can see the condition that property is in,” Doherty said.

GALLOWAY TOWNSHIP — For most fans and tournament officials, the past few days have been special.

The proposed cost of the project is up about $5 million over initial estimates, which CRDA staff connected to cost increases since the start of the COVID-19 pandemic.

“That includes everything from soup to nuts — all of the interior fit-outs, refrigeration, cases and everything associated with a turn-key supermarket operation,” McCarthy said.

The site also falls under the state’s Coastal Area Facility Review Act regulations, an additional layer of review for large-scale projects constructed near the coast.

A sewer line running across the property also will need to be relocated, Doherty said.

“That’s part of doing development in an urban environment,” he said. “The costs are not exorbitant for a first-class facility.”

Plans call for a supermarket with more than 44,000 square feet of shopping area at 1801 Baltic Ave., on a property close to both the Atlantic City Convention Center and Tanger Outlets The Walk. Most of the property is currently a parking lot, bordered by Indiana and Ohio avenues, between Baltic Avenue and Bacharach Boulevard.

Councilman Kaleem Shabazz has said residents enthusiastically welcome the project, which he said was brought to churches, community groups and others for review well before the plans reached this point.

“They should not try to obfuscate or distract from what has happened,” Shabazz said. The bottom line is that Atlantic City cannot grow economically and remain a food desert, he said.

Not everyone is convinced. Some of the same people who raised concerns at the last full CRDA board meeting also spoke at the Wednesday hearing, including James “Jimmy” Whitehead, who is running as an independent candidate for mayor.

Whitehead again asked for a delay in the process.

“We feel the community should be the ones that lead this,” he said.

“We’re not going to postpone today’s public hearing on this. We’re going to move forward,” said Lance Landgraf, the CRDA’s director of planning and development.

GALLOWAY TOWNSHIP — The ShopRite LPGA Classic will be a part of television history this week.

Whitehead and other speakers want a community benefits agreement on the project, outlining specific ways Village Supermarket Inc. will help Atlantic City residents, including with jobs at good wages.

McCarthy agreed to meet with critics but made no promises about any agreement. Earlier in the meeting, he said the company has union employees and benefits from collective bargaining and contract protections.

“We’re open to do anything that is consistent with making the project a success,” McCarthy said. “As they say, the devil is in the details. I don’t know what’s being asked for.”

Another resident, Steve Young, said the community needs a supermarket but had questions about the proposal, including whether the property would pay taxes and how much money Village Supermarket Inc. would put toward the project.

Others questioned how long the supermarket would operate.

The final agreement has not been approved by the full board, but from the discussion at the hearing, there did not seem to be a minimum number of years for the new supermarket to remain open.

“If you look at our history, we’re not an overnight operation. We go into a community and we stay there,” McCarthy said. “We intend to be part of the Atlantic City family for a very long time.”

If the company did pull out of the deal, Doherty said, the CRDA would be able to quickly get another supermarket operator in place. Because the authority will own the property, he said, it would not pay local taxes.

One reason Atlantic City has remained a food desert is that corporations would not make money operating in the town, McCarthy said. He said the company is committing itself economically, including buying inventory and paying employees.

“The numbers do not work without some funding from CRDA,” he said. He said the store would hire Atlantic City residents, and that some city residents already work at other ShopRite locations. Plans call for 75 to 100 full-time jobs at the store.

Michael Chait, the president of the Greater Atlantic City Chamber of Commerce, welcomed the plan, stating at the meeting that the project has been in the works for more than a decade. Chait said the CRDA deserves tremendous credit.

“We hope that this is going to be a great economic boon to everyone in town,” McCarthy said, citing the aphorism that ‘a rising tide lifts all boats.’

“We hope to create that rising tide,” he said.

ATLANTIC CITY — More than 20 people gathered on the Boardwalk on Sunday afternoon to participate in Walk Against Hate, a national movement cre…

ATLANTIC CITY — A proposed ShopRite supermarket on Baltic Avenue is a step closer to reality.

ATLANTIC CITY — On a warm, sunny morning a week before Thanksgiving, officials gathered in Atlantic City to give thanks for feasts to come, wi…

CRDA is getting ready to vote on the a new ShopRite to be built between North Ohio and North Indiana avenues.

Representatives of the Casino Reinvestment Development Authority and of Village Supermarket Inc. discuss a proposal for a new supermarket in Atlantic City in a remotely held public hearing Wednesday. The authority plans to put $18.7 million into the project.