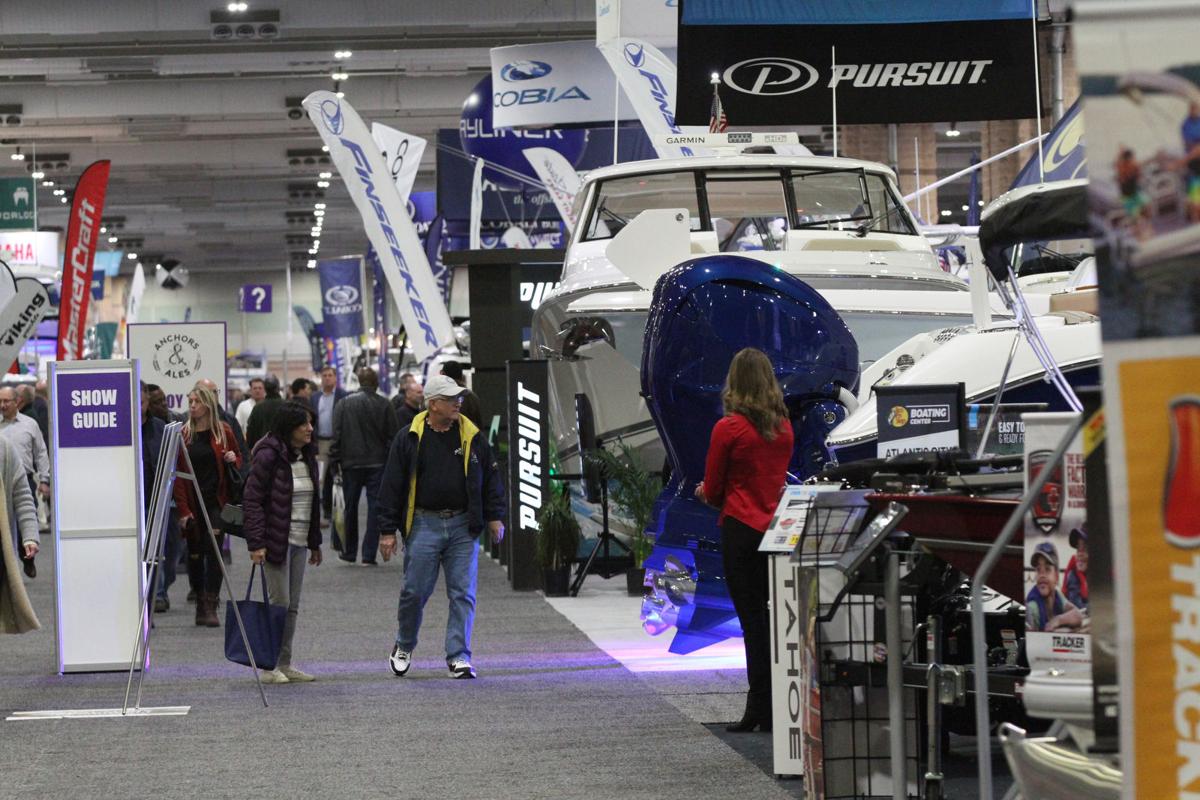 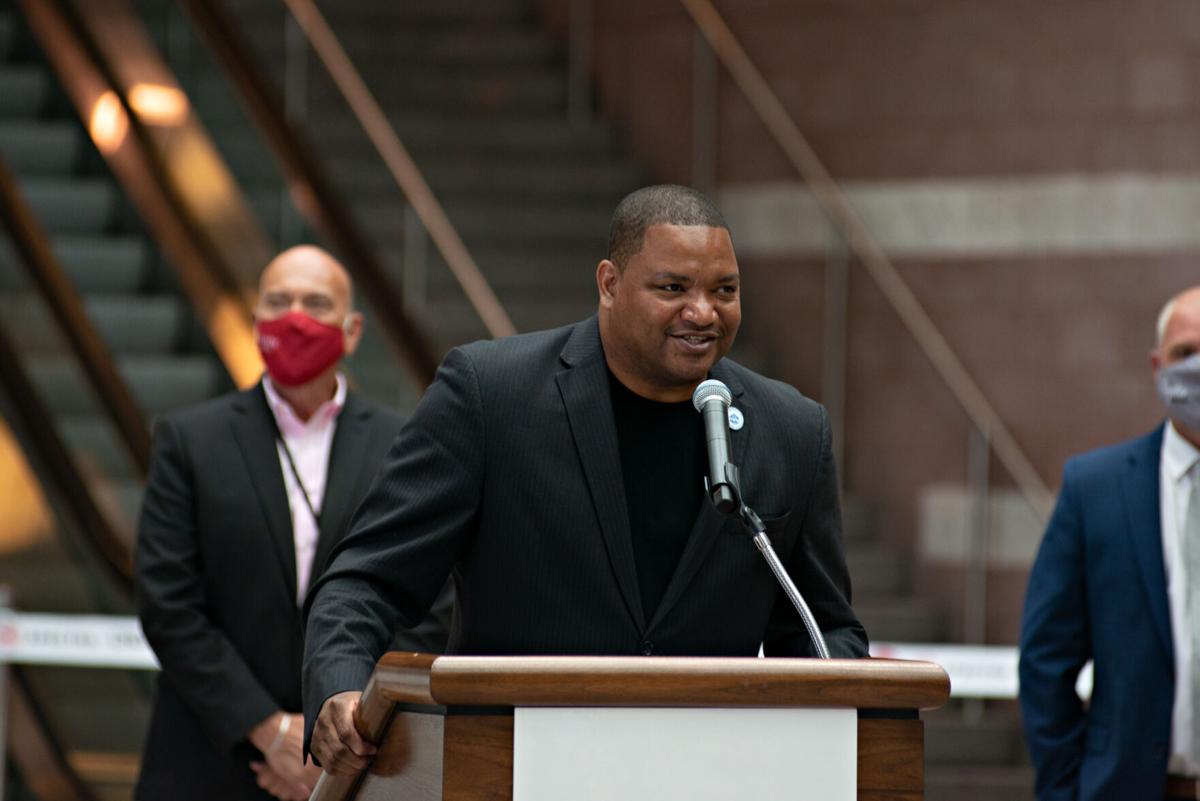 Atlantic City Mayor Marty Small speaks during a ceremony Friday to mark the reopening of the Atlantic City Convention Center for trade shows and other events. "I'm just excited about what the future holds," Small said. 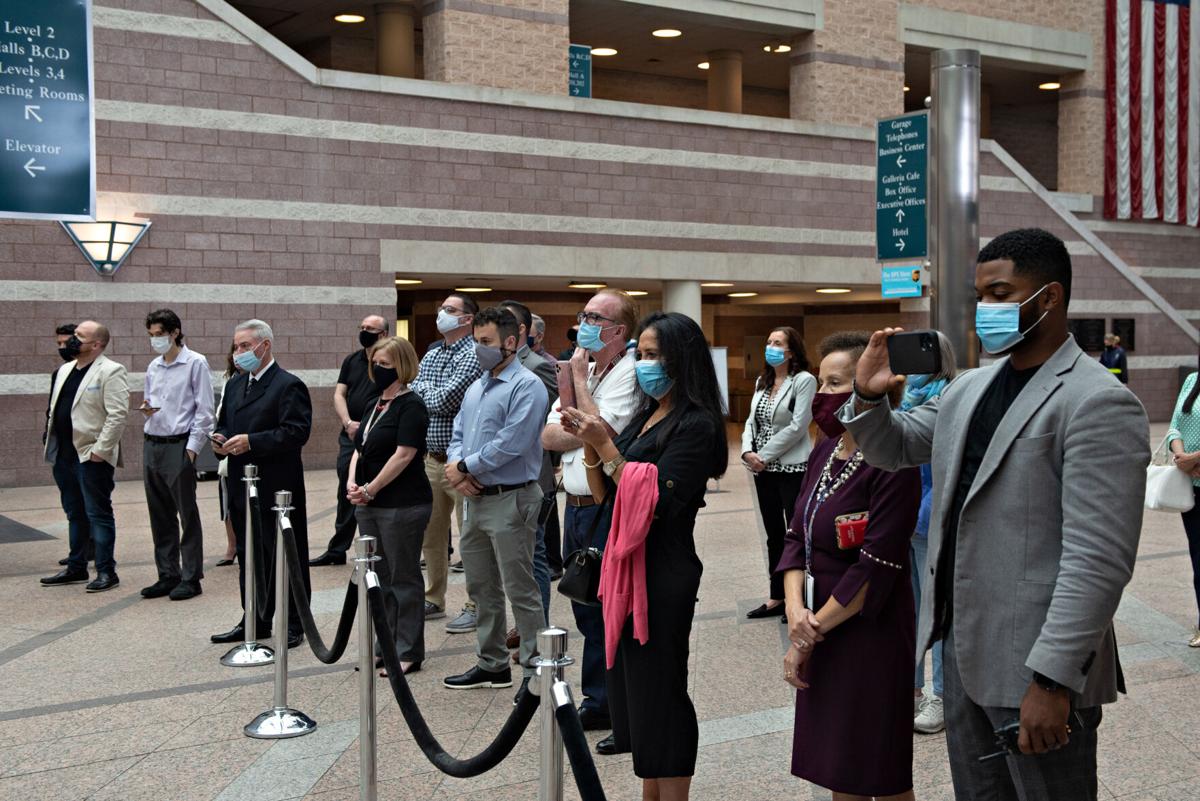 Representatives from ImportExpo, Spectra and Meet AC and others gather Friday to celebrate the reopening of the Atlantic City Convention Center for trade shows and other events. 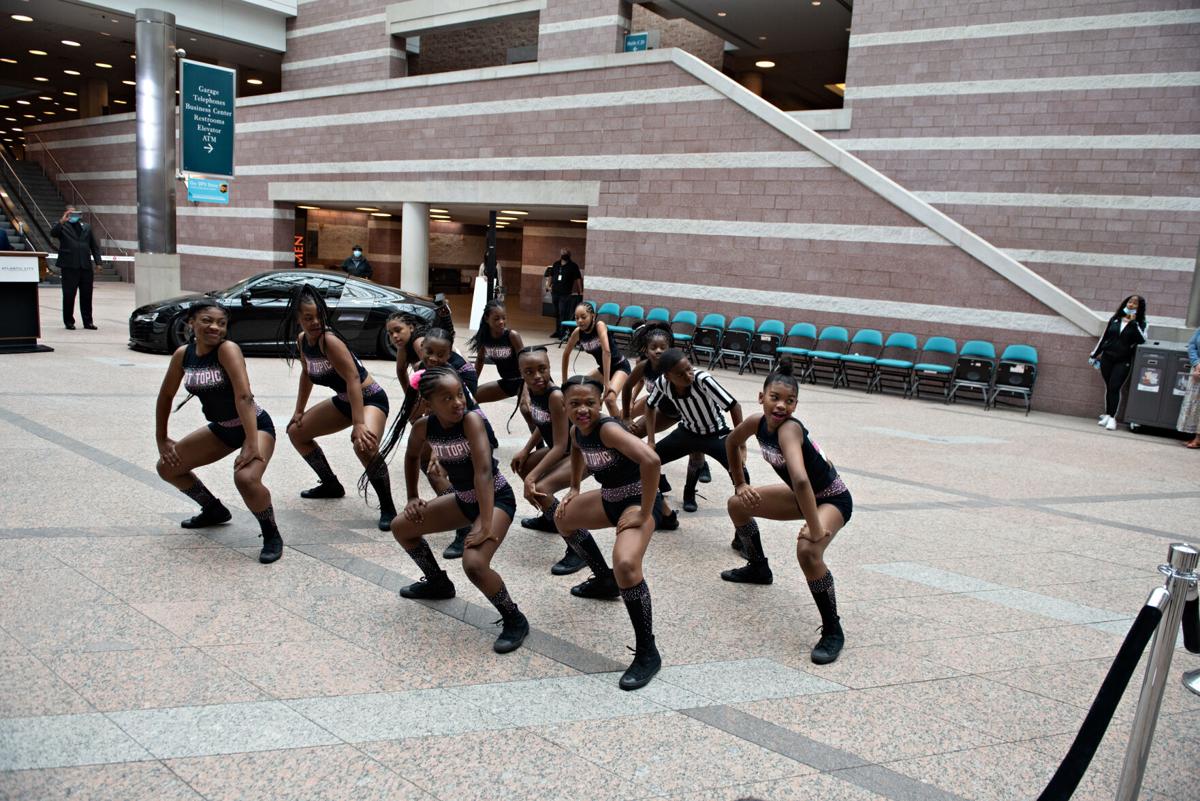 The Hot Topic Dance Troupe performed a routine at the reopening ceremony at the Atlantic City Convention Center on Friday. The group recently won a major competition and was rewarded with $500 for a celebration.

ATLANTIC CITY — For city officials, Friday marked a major step in the city’s efforts to recover from the COVID-19 pandemic.

Mayor Marty Small Sr., with members of the Atlantic City Convention Center and Meet AC, officially reopened the center to the public with a ribbon-cutting ceremony ahead of Sunday’s ImportExpo. The convention will be the first in the city since the onset of the COVID-19 pandemic.

The mayor expressed confidence in the city’s ability to bounce back because it’s already shown that throughout the last decade, he said.

Because of the pandemic, the convention center only hosted 21 events in 2020 compared to 87 in 2019. In April, a number of county and local officials gathered at Kennedy Plaza urging the governor to allow industry operations to resume. County Commissioner Caren Fitzpatrick said at the time that conventions and trade shows bring in $2 billion for the city annually.

A city police officer then presented the team’s coach, Whitney Brown, with a $500 check to help fund a banquet in celebration of the championship.

As Small was handed oversized scissors to cut the ribbon after the performance, he called on the dance team to initiate a countdown. Once they said, “one,” the mayor cut the ribbon to applause from the crowd.

“We are thrilled to be able to able to finally welcome back longtime clients and new clients, not only to the convention center, but to the destination,” Sieg said. “From this day on, we can now move forward again.”

Sunday’s convention will be the eighth time ImportExpo has come to the city. Both Small and McDonald said the center had no trouble booking the summer with events.

“I was told by the convention center staff that only one organization didn’t come back,” Small said in reference to past conventions. “That shows that people are bullish on Atlantic City, and as we continue to open in all phases, I’m just excited about what the future holds.”

ImportExpo will also return to the city for another auto show in November. Michael Reynolds, the senior sales manager for Spectra Experiences, said talks between the convention center and ImportExpo continued throughout the pandemic. The parties waited for opportunities to bring the show back, but previous dates were canceled twice as the state had not fully reopened yet.

Reynolds, who’s help coordinate the event since its first visit to the city, was also enthusiastic about the return.

Though the convention center’s online calendar includes events through December, things weren’t set in stone until Gov. Phil Murphy fully reopened the state a few weeks ago. Next Wednesday and Thursday will see the arrival of the Action Expo, and August will include Police Security Expo and 2021 Impressions Expo. The last two are expected to draw at least 7,000 people.

More events should be added in the near future, McDonald said.

“We’re feverishly on the phone right now,” he said, “talking to promoters, et cetera, and reintroducing them to the building.”

Video and a photo gallery from Friday's event are attached to this story at PressofAC.com.

Girl, 11, hospitalized after being pulled from Brigantine resort pool

BRIGANTINE — An 11-year-old girl was pulled from the bottom of a pool at Legacy Resorts on Saturday afternoon and hospitalized, police said.

For the sixth straight year, we at The Press of Atlantic City are proud to bring you this year's outstanding high school leaders.

PLEASANTVILLE — Mary Parker had a hard time believing the amount of love and appreciation her late father received Saturday.

Several New Jersey schools have announced masks will not be required for the remainder of the school year for students following Gov. Phil Mur…

GALLOWAY TOWNSHIP — A multimillion-dollar, mixed-use commercial and residential project at Pomona Road and the White Horse Pike is consistent …

Louis Altobelli, owner of Court House Towing in Rio Grande, may make another appearance in upcoming months in front of the Township Committee …

In today’s primary elections, many eyes will be on a handful of South Jersey races.

In Tuesday’s primary elections, many eyes will be on a handful of South Jersey races.

Atlantic City Mayor Marty Small speaks during a ceremony Friday to mark the reopening of the Atlantic City Convention Center for trade shows and other events. "I'm just excited about what the future holds," Small said.

Representatives from ImportExpo, Spectra and Meet AC and others gather Friday to celebrate the reopening of the Atlantic City Convention Center for trade shows and other events.

The Hot Topic Dance Troupe performed a routine at the reopening ceremony at the Atlantic City Convention Center on Friday. The group recently won a major competition and was rewarded with $500 for a celebration.