An attorney investigating conditions at the Cumberland County jail recommended a long list of reforms to protect the health of inmates in his final report to a federal judge Tuesday.

But in the same report, the attorney said he lacks faith in current leaders to make the changes happen.

"We question whether the critical paths outlined and recommendations made herein can be achieved or if they are beyond the capabilities of the current leadership," attorney William J. Hughes said in the report to Judge Noel L. Hillman.

The Cumberland County Board of Commissioners is attempting to close the facility, reversing an earlier decision to build a new $65 million jail.

Hillman is handling a lawsuit by a group of inmates suing the jail and the county over what they call a lack of protections against COVID-19. 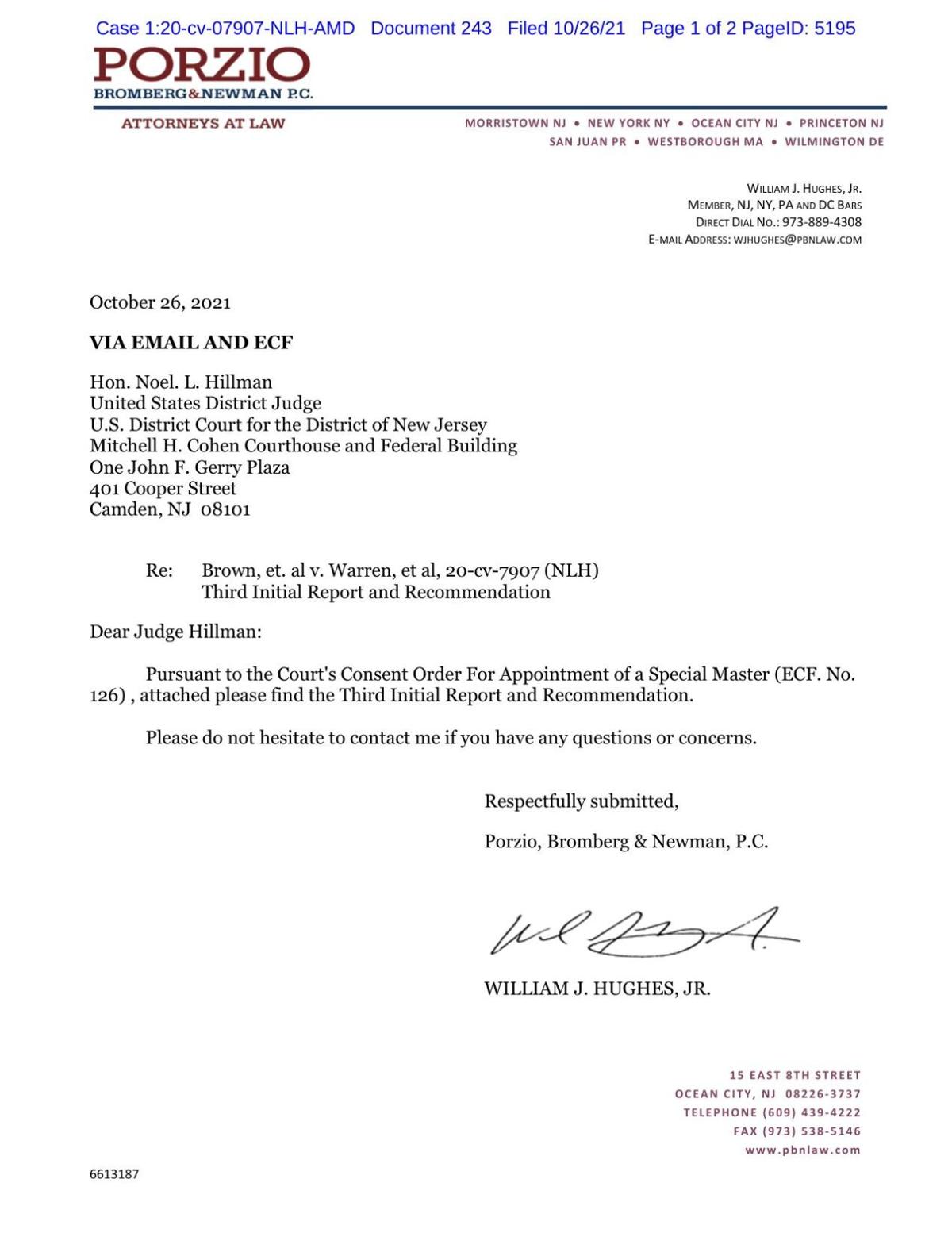 Hughes, a partner in the law firm Porzio, Bromberg and Newman, was appointed special master to investigate and report to the court on a variety of virus-related issues.

Hillman had used those reports to order changes in the way supplies and PPE were made available to inmates, but according to testimony at recent hearings, some officers at the jail have refused to implement the judge's orders and no supervisor has enforced them.

The third and final report released Tuesday looked at the last items on the list, which included inmates' lack of access to recreation and to the law library, both required by law.

"CCJ must immediately provide inmates the opportunity to participate in a minimum of one hour of physical exercise and recreation each day outside the living unit," Hughes said.

"If CCJ cannot provide these required opportunities to inmates due to staffing shortages, then CCJ must reduce the inmate population to such a degree that there is adequate staff to immediately provide them," Hughes wrote.

Two wardens have quit since January, and the county Board of Commissioners then appointed retired State Police Capt. Stanley B. Field to serve as interim jail operations director, then gave jail oversight to county Sheriff Robert Austino for a time.

Caldwell will be interim warden at the Bridgeton jail through April, and the agreement allows for the deal to be extended.

Hughes said there is a root cause of the jail's poor performance and inability to make court-ordered improvements, saying there is "a lack of communication and accountability that is exacerbated by the distrust and concern over the future of continued operations of the jail."

The county's attempts to close the facility have been complicated by legal filings.

Last month, the New Jersey Supreme Court cleared a path for the facility to close, having rejected an appeal from the state Office of the Public Defender. It essentially upheld a Superior Court decision that allowed the county to close the jail.

Cumberland County to transfer some jail inmates to Hudson County

Both suits were filed Tuesday in U.S. District Court in Camden by attorney Andrew Darcy.

Atlantic County may expand jail to take in Cumberland inmates

NORTHFIELD — Atlantic County is considering expanding its jail in Mays Landing by about 256 beds to accommodate Cumberland County inmates, Adm…

For many in the Cumberland County jail, the last time they were outside was Thanksgiving.

NORTHFIELD — There will be no expansion of Atlantic County’s jail to accommodate Cumberland County inmates, after the Board of Commissioners o…

CAMDEN — More than a year into the COVID-19 pandemic, the Cumberland County jail has developed a draft policy for responding to the coronaviru…

CAMDEN — A cleaner the Cumberland County Jail is using to disinfect against COVID-19 is ineffective, and its sanitizing procedures are inadequ…