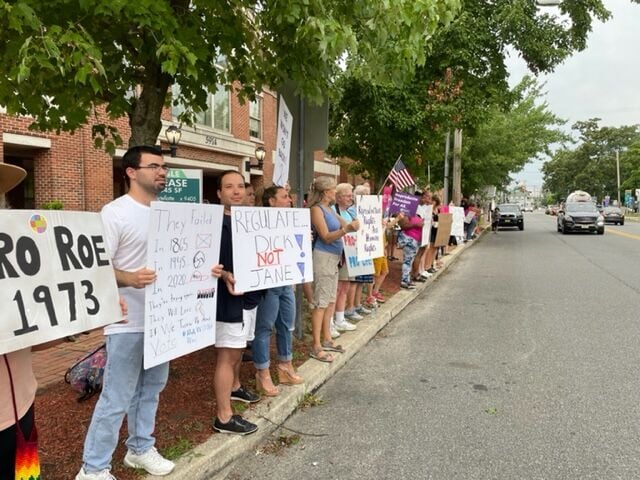 Pro-choice Democrats line Main Street in Mays Landing on Friday evening outside U.S. Rep. Jeff Van Drew’s office to protest his switch from pro-choice Democrat to pro-life Republican since first being elected in 2018. 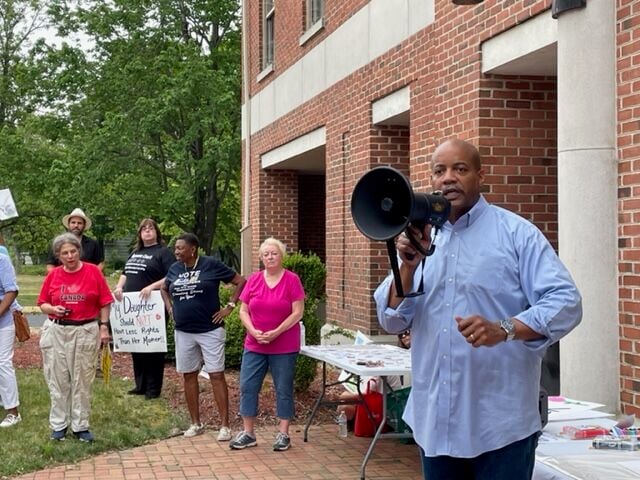 Congressional candidate Tim Alexander, of Galloway Township, vowed to support women’s reproductive rights if elected to Congress in November. He faces U.S. Rep. Jeff Van Drew, R-2nd, who has switched from a pro-choice Democrat to a pro-life Republican since first being elected in 2018.

Abortion opponent John Anderson, who refused to provide his town of residence, heckled the pro-choice protesters and called out repeatedly, “Abortion is racism.”

The U.S. Supreme Court voted last month to overturn the nearly 50-year-old Roe v. Wade decision that legalized abortion in all 50 states, turning the issue back to the states.

“I fought for it back when I could be needing an abortion,” said Julie Powell, of the Dorothy section of Weymouth Township, who is beyond her childbearing years. “I’m fighting for girls who might need it now.”

Her sign, which she held up at the rally sponsored by CD-2 Progressive Democrats, read “Pro Choice, Pro Democracy.”

Many cars tooted their horns in support as they passed, while a few people yelled out their opposition to abortion through open windows.

Across Main Street from the demonstration, abortion opponent John Anderson, who declined to say where he lived for fear of retaliation, yelled out “Abortion is racism,” angering many in the crowd.

Next to Powell, Diane Faherty, of Brigantine held a sign that was a bit more pointed.

“We’ve had 50 years of free access to reproductive health care, and now we have five Supreme Court justices ... taking rights away from women,” Faherty said.

New Jersey state law and the state constitution will continue to allow women to make their own decisions about continuing a pregnancy, but many in the crowd said they were concerned about the rights of women in other states.

“What matters is keeping our rights. This is not something that is going to go away. Keep the protests going. Keep the momentum going,” said former congressional candidate Carolyn Rush, 60, of Sea Isle City. She encouraged the crowd to vote for her primary opponent, 2nd Congressional District Democratic candidate Tim Alexander, of Galloway Township, in November.

Rush’s sign read, “Can we talk about the elephant in the womb?” with a drawing of a GOP elephant in a woman’s uterus.

“The court just got started with abortion. Next they are going to do the same thing with same-sex marriage, then interracial marriage,” Alexander said of the court reversing other precedent that relied on the concept of privacy in the Constitution.

In the majority opinion, the justices said there is no privacy guarantee in the U.S. Constitution.

Among others speaking was Juliet Hankerson, who is running for Cape May County commissioner and said she is the first Black woman to run for that position in that county.

“This is not a scriptural issue,” said Hankerson, who is a reverend. She said many believe we are not living souls until we take our first breath. “That is not until delivery.”

Zariah Taylor, 24, of Galloway, said she was there to support other women.

“I was the victim of rape, and I had an abortion due to that,” Taylor said. “It’s a choice. It’s not an easy choice, but as women it’s important we make the decisions.”

There will be another pro-choice rally outside Van Drew’s office at 5 p.m. Wednesday, sponsored by the Egg Harbor Township Democratic Club.

SEA ISLE CITY — A Monday afternoon charter boat trip in the city’s back bays turned scary when the vessel began taking on water.

The League of Women Voters of Atlantic County is sponsoring a debate for the New Jersey 2nd Congressional District candidates at 7 p.m. on Sep…

Abortion issue causing lots of buzz, but will it bring out Democratic voters?

Pro-choice Democrats line Main Street in Mays Landing on Friday evening outside U.S. Rep. Jeff Van Drew’s office to protest his switch from pro-choice Democrat to pro-life Republican since first being elected in 2018.

Congressional candidate Tim Alexander, of Galloway Township, vowed to support women’s reproductive rights if elected to Congress in November. He faces U.S. Rep. Jeff Van Drew, R-2nd, who has switched from a pro-choice Democrat to a pro-life Republican since first being elected in 2018.

Abortion opponent John Anderson, who refused to provide his town of residence, heckled the pro-choice protesters and called out repeatedly, “Abortion is racism.”