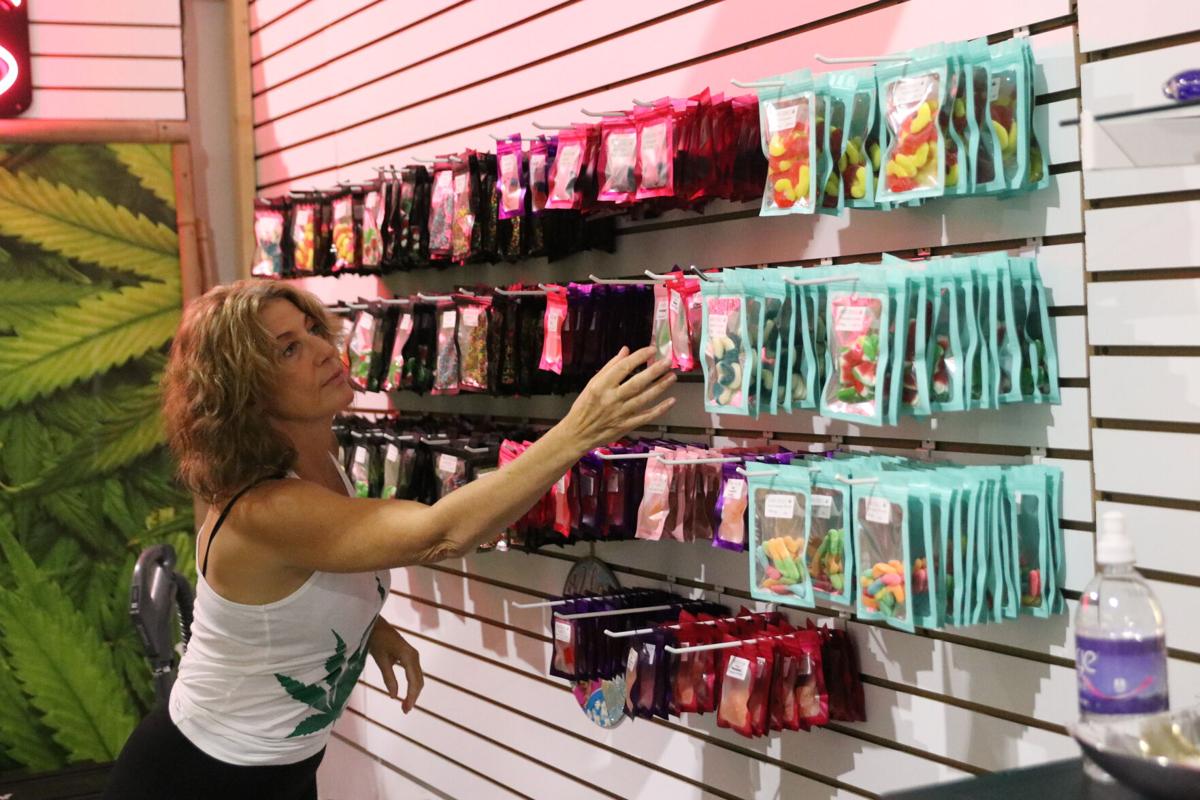 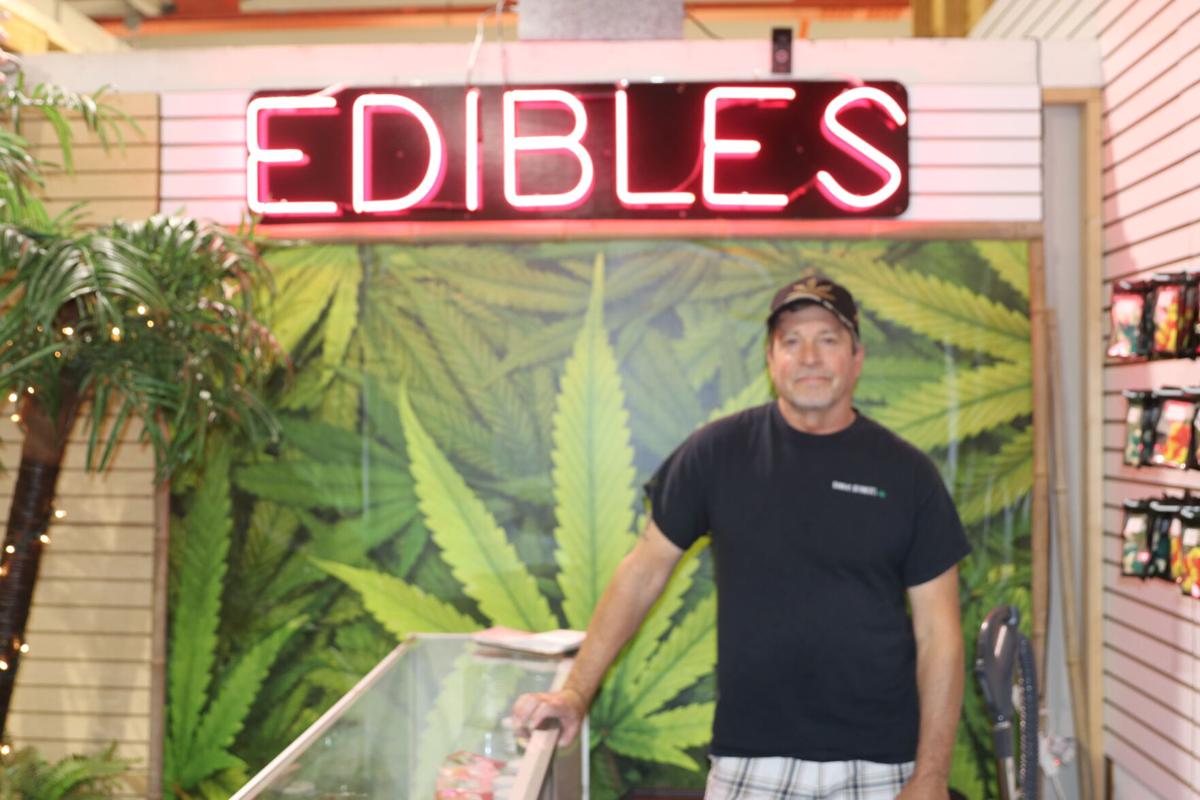 Ken Nelson, owner of Kannavis Botanicals on the Wildwood Boardwalk, says the current market for delta-8 THC, a substance derived from legal hemp, could use some regulation, but he does not want to see so much regulation that the new market is out of business.

WILDWOOD — In the complicated and sometimes confusing overlap between marijuana, cannabis and hemp, products containing delta-8 THC have become increasingly visible, sold over the counter in multiple locations in South Jersey and around the country.

The market expanded rapidly this year, leading to questions about its legality and concerns about its safety.

Signs advertising edibles, tinctures, vape cartridges and other products cropped up this summer on the Wildwood Boardwalk, the Washington Street Mall in Cape May, the Black Horse Pike in Atlantic County and other locations.

The products are intoxicants and are sold in a legal gray area. Under federal rules, hemp can be grown, sold and transported so long as it has a negligible amount of intoxicating material. Delta-8 THC is produced from hemp in a complicated chemical process.

“It’s like selling grapes but turning it into wine and then saying, ‘No, this is just grape juice,’” said Matt Harrell, vice president of government regulations for the cannabis company Curaleaf and the communications chairman for the New Jersey Cannabis Trade Association.

In a recent interview, he raised concerns about the safety of products containing the substance.

“It will get you high,” said Harrell. “It’s highly unregulated. This is a public health crisis waiting to happen.”

This month, the Centers for Disease Control and Prevention in Atlanta issued a health advisory about delta-8 THC, closely related to delta-9 THC, the substance in marijuana that gives the plant its psychoactive effect.

The health advisory includes reports of accidental ingestion of delta-8 products, including by adults who mistook the products for CBD-infused products, and two incidents in which children were hospitalized after eating their parent’s delta-8 gummies.

The FDA has also issued a warning about the proliferation of products containing the substance, citing the impact on children and of the chemicals used to produce the concentrated substance.

“These products have not been evaluated or approved by the FDA for safe use in any contexts,” reads a Sept. 14 warning from the FDA.

With legal, taxed and regulated cannabis expected to be offered for sale soon in New Jersey, Harrell and others in the legal cannabis market are calling for greater state oversight of the products.

Edmund DeVeaux, president of the New Jersey Cannabusiness Association, said the regulated market is just about to get underway in New Jersey, and expressed concern about the impact of an unregulated substance.

While groups have advocated for legal cannabis in the state, Harrell said the cannabis now sold for the medicinal market, and what will be sold for the adult-use market once the first licenses are approved, go through extensive testing and quality control.

Someone buying an unregulated delta-8 product will have no idea about the source of the product, Harrell said, raising concerns about potential contamination.

While it is now legal for people to possess cannabis in New Jersey, there is nowhere to legally buy it, except for those with medical marijuana cards. The underground market continues as ever, with the added availability of buying delta-8 products over the counter in multiple locations, in person and online.

Oversight of the market appears spotty at best. In May, the state Department of Agriculture sent a letter to hemp growers in New Jersey warning that synthetic THC was not allowed to be produced.

But most delta-8 items sold in New Jersey are produced out of state, putting it under federal jurisdiction as interstate commerce. There appears to be a great deal of uncertainty, with several experts arguing the substance is legal if produced from legal hemp.

At a meeting Tuesday, members decided to hold off on a final vote to allow more time for ame…

Right now, it appears that neither local police nor state officials have specific authority to regulate sales to consumers.

“It’s the Wild West,” said Ken Nelson, owner of Kannavis Botanicals on the Wildwood Boardwalk. When he opened in 2020, his business consisted of products infused with CBD, another chemical found in hemp and cannabis plants, one which does not have intoxicating properties.

“People were asking for it over and over. It completely took over the sales,” Nelson said.

Nelson said he will only sell products containing CBD to those over 18, and will not sell delta-8 products to anyone under 21. It does not sound like there is any state rule requiring that precaution.

“That’s my rule,” Nelson said. He described an incident over the summer where parents accused him of selling an intoxicating delta-8 product to their teenage daughter. It turned out the product was purchased at another store.

New Jersey’s recreational marijuana market is beginning to sound like a gold rush.

Nelson described the effects of delta-8 as similar to those of marijuana, but less intense. Like marijuana, the effects also seem to vary from person to person, making one individual feel more alert and energized while another may feel lethargic or sleepy, Nelson said.

But beyond delta-8 products, he said marijuana is also readily available, describing sales at flea markets and elsewhere in which someone buys an overpriced sticker or T-shirt. The seller then gives the buyer an eighth of an ounce of marijuana.

That was the process at a Main Street shop in Middle Township, where police arrested two men in July. As described by police Chief Christopher Leusner, the customer would buy a legal product, but would allegedly be given an amount of marijuana.

Leusner said the two people charged were in possession of far more than the law allows and were trying to circumvent the state cannabis license requirements. Police seized several pounds of marijuana and $4,000 in cash, according to police.

Meanwhile, the underground marijuana market is thriving, according to Ed Forchion, a marijuana activist better known as NJWeedman. Most users continue to buy from the same sources as they have for years.

Forchion said he is aware of the questions surrounding the legality of delta-8, but added those questions are close to irrelevant for those selling black market marijuana. He also laughed off concerns about the sources and purity of the product, saying longtime users never knew the original sources or worried about lab tests.

In municipal meetings throughout New Jersey, elected officials are learning a new vocabulary…

“You never had your weed tested. You never knew where it came from, except that your homeboy got it for you,” he said.

Nelson worries that a state crackdown on delta-8 could put him out of business. He has a license to sell CBD products, which comes with a regular inspection. Those without any license often receive far less scrutiny, he said.

The market for delta-8 is closely associated with CBD sales, for reasons tied to both chemistry and the law.

Hemp, which has been used for eons to create fabric, is genetically the same plant as marijuana. For years, federal authorities treated both plants the same, but in 2018, President Donald Trump signed a farm bill that allowed hemp to be grown and shipped between states. Hemp, by federal definition, has less than 0.3% THC, or delta-9 tetrahydrocannabinol, the chemical that makes marijuana users high.

The farm bill cleared the way for an explosion in the popularity and availability of products containing CBD, or cannabidiol, one of the thousands of compounds found in the plant.

Proponents of CBD say it has multiple health benefits, although the FDA warns it has not been approved for any medical use. Studies show some promise in preventing some kinds of seizures, and some users indicate it can help with inflammation, pain and anxiety.

While it does not have any intoxicating effects, through a series of chemical processes, the isolate of CBD can be used to create concentration of delta-8 THC, which is not governed under existing laws.

Nelson worries that a state ban on delta-8 could put him out of business, but he would welcome some regulation. He said there are reasons to be concerned with the potential contaminants when buying something at a gas station or flea market in an entirely unregulated market, with the potential of some companies cutting corners in the process.

“The people that buy from us are getting what they’re supposed to,” Nelson said. “For the very few people who ask for test results, we can give it to them.”

Delta-8 will be the chief competition to legal cannabis in New Jersey, he said.

“It’s going to put a dent in their product. It is less expensive and more available. And you don’t get obliterated and out of control with it,” Nelson said. “It’s great for people who want that mellow feeling and don’t want to get as intoxicated.”

EAST RUTHERFORD — If you build it during a pandemic, will they still come?

In southwestern New Jersey, 40 of 100 municipalities have opened their doors to cannabis businesses within their borders under New Jersey’s le…

A Friday vote by the state’s Cannabis Regulatory Commission pulled the rug out from under plans for a medical cannabis site in Middle Township.

Study: Young cannabis users twice as likely to have a heart attack

According to a new study, young cannabis users are twice as likely to have a heart attack as non-cannabis users.

Ken Nelson, owner of Kannavis Botanicals on the Wildwood Boardwalk, says the current market for delta-8 THC, a substance derived from legal hemp, could use some regulation, but he does not want to see so much regulation that the new market is out of business.