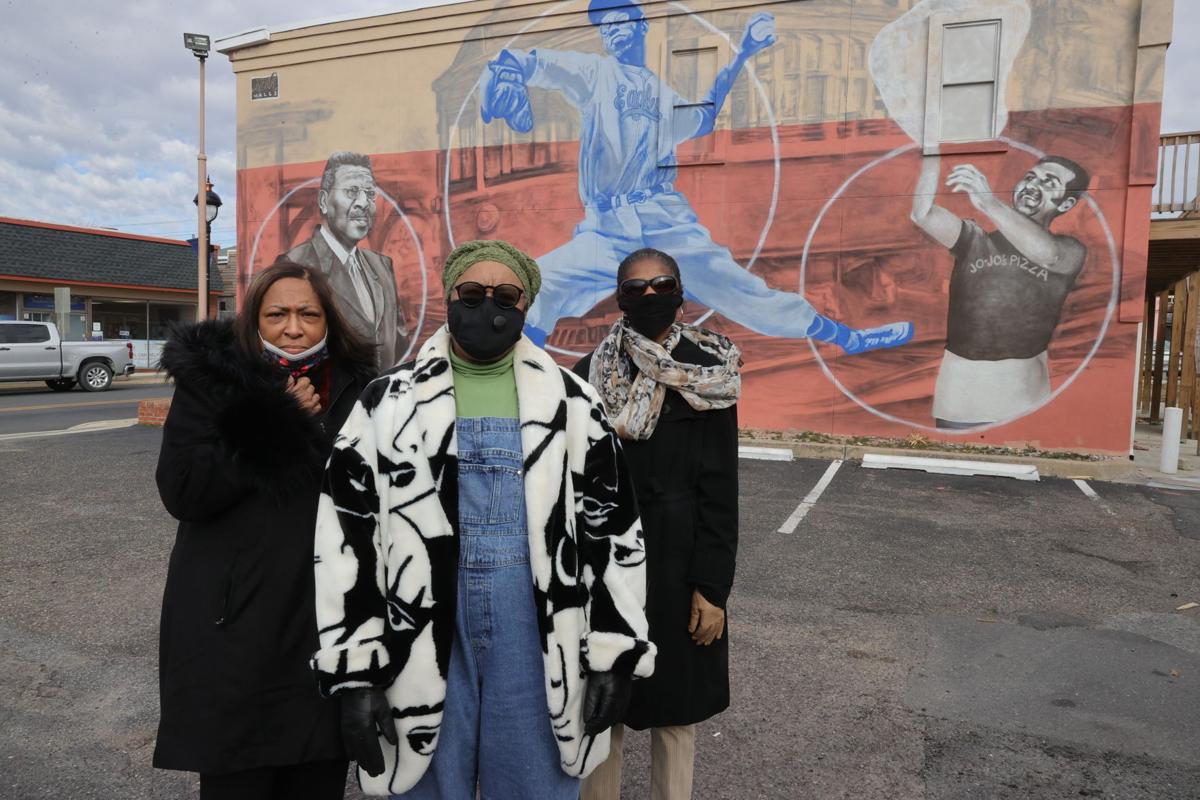 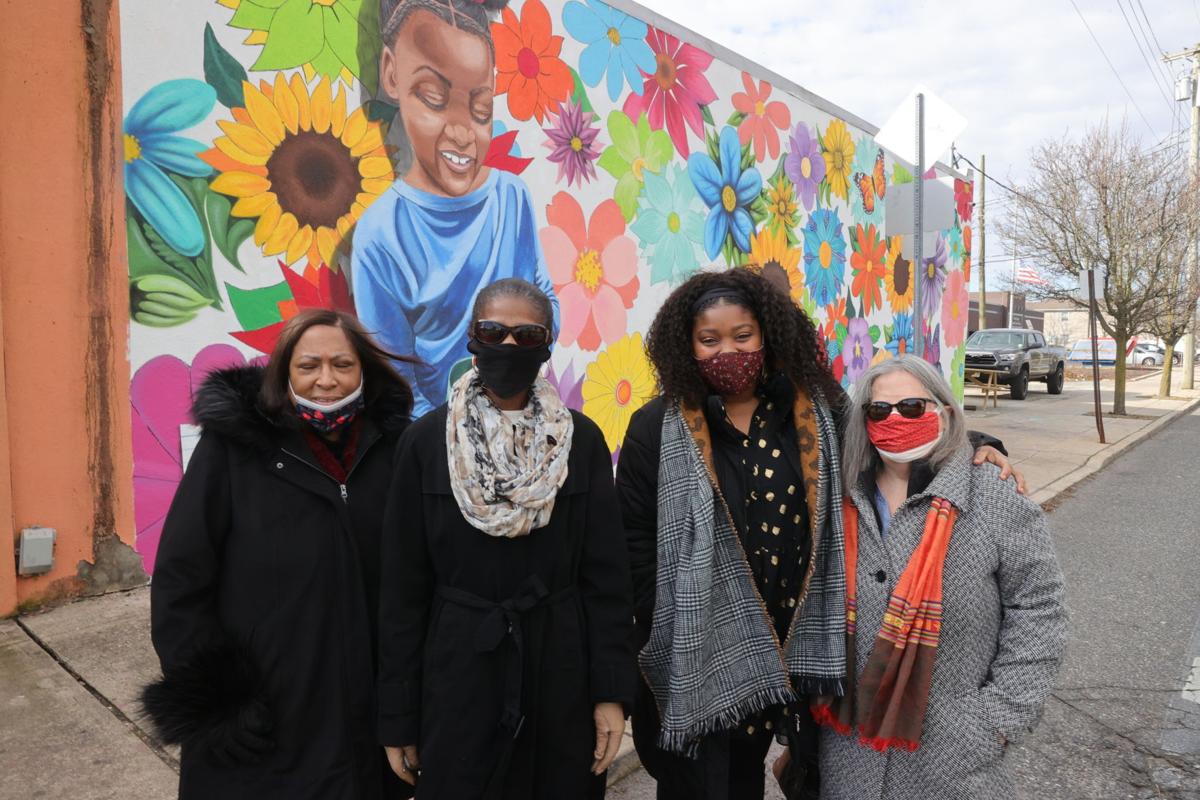 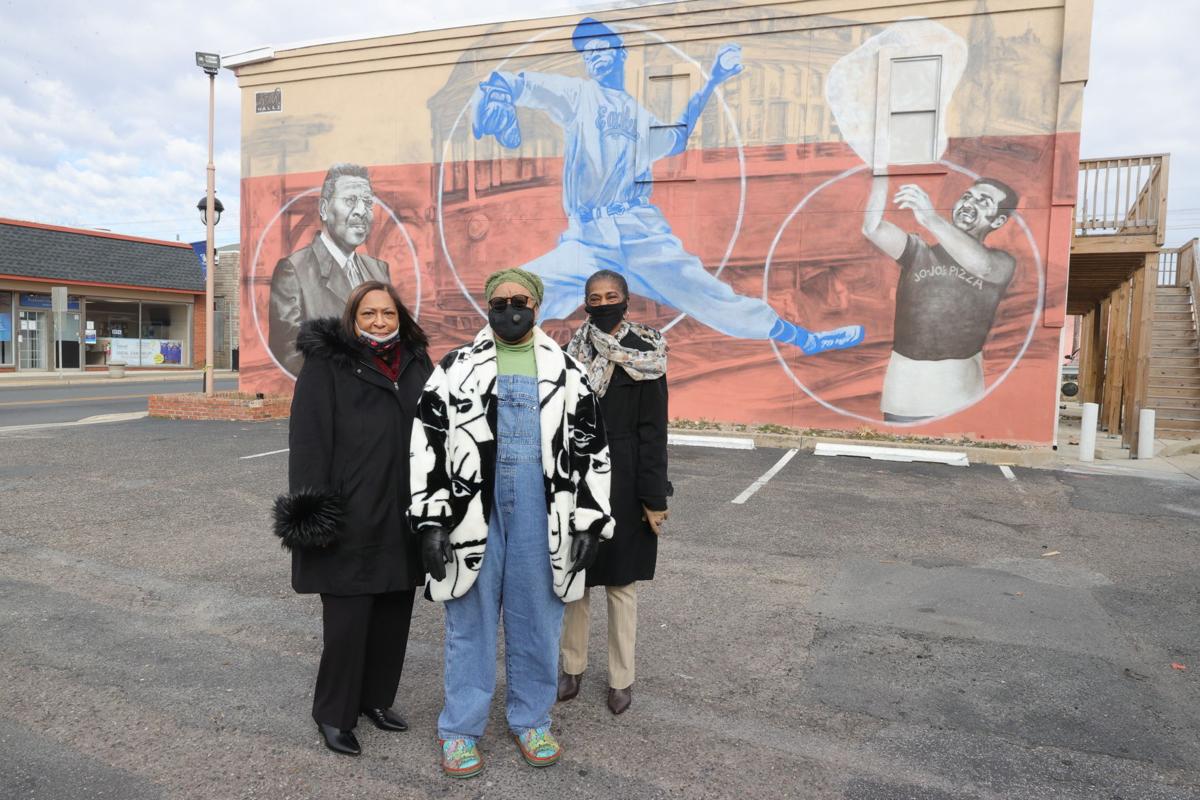 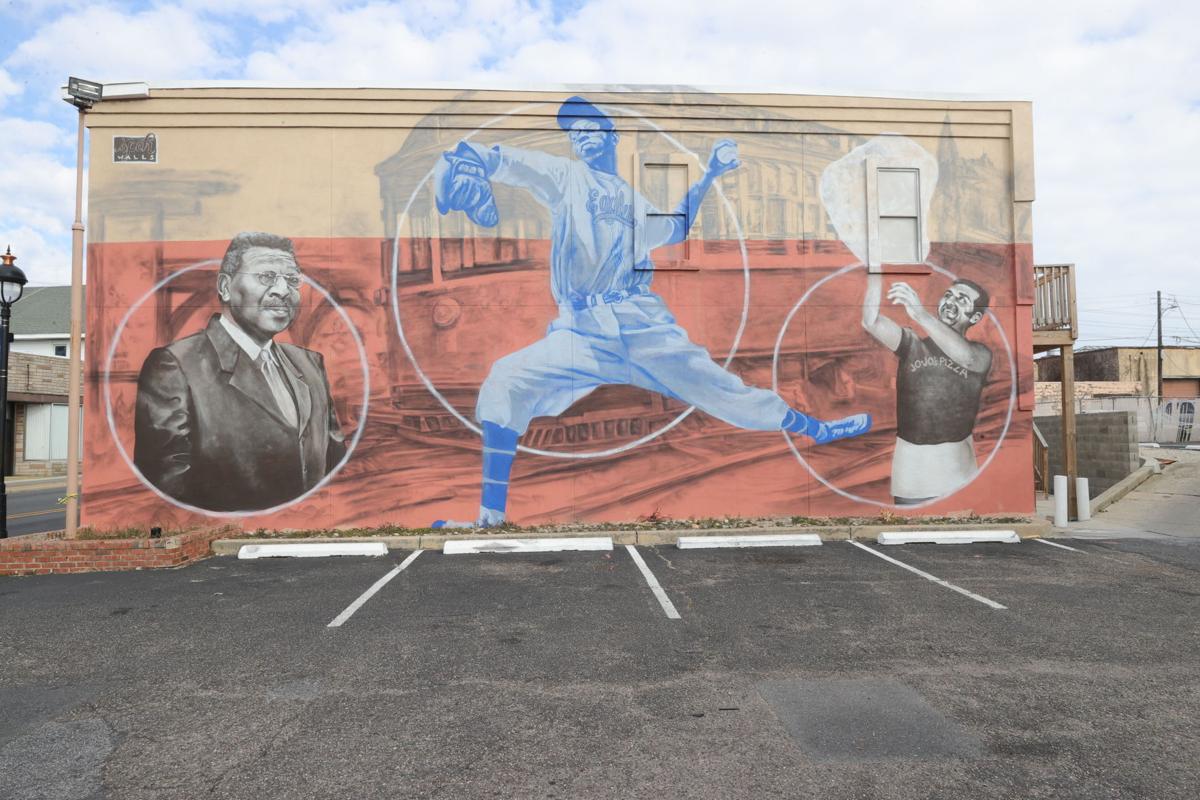 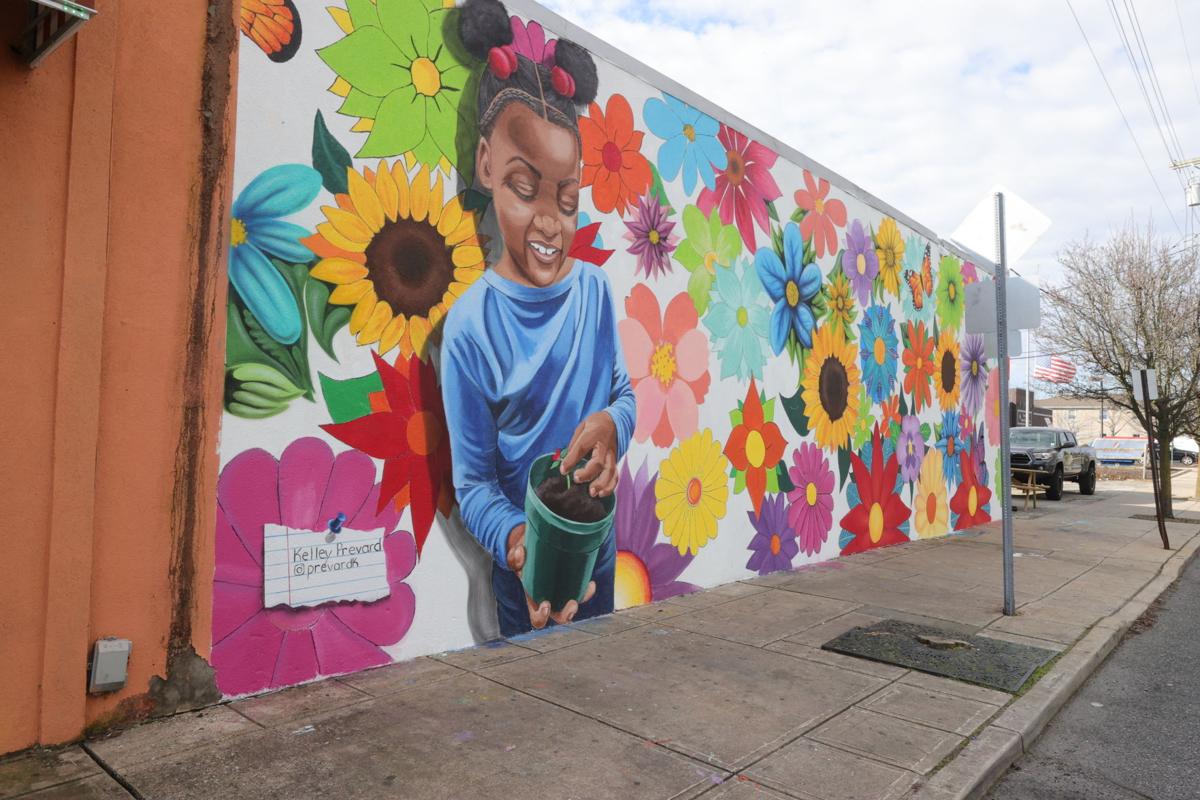 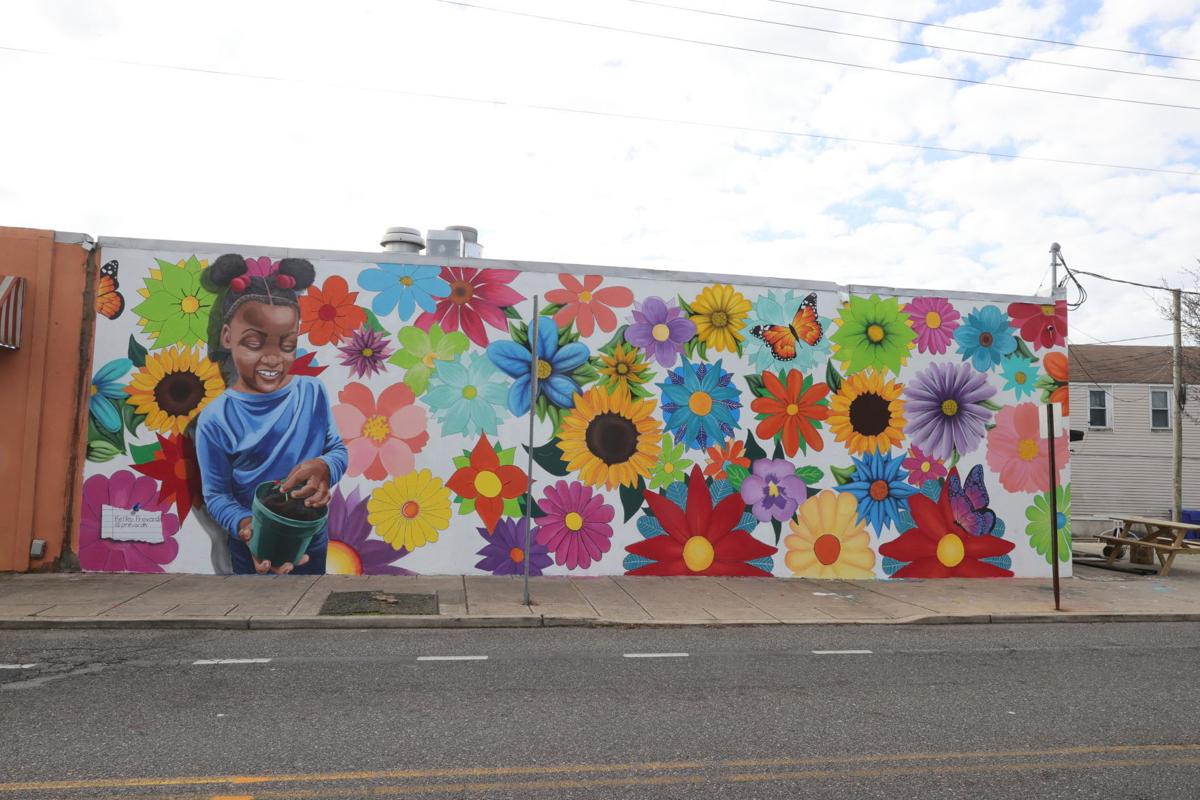 Kelley Prevard, of Atlantic City, created the mural on the side of the El Sabor de la Esquina restaurant in Pleasantville.

PLEASANTVILLE — The city’s downtown business district has its attributes, particularly convenience, but few people would describe it as beautiful.

City officials are looking to change that perception.

Two murals have been completed.

The other mural, which illustrates a girl holding a planter full of dirt with an array of different flowers seeming to come out of it, sits on the wall of the Latin American El Sabor de la Esquina restaurant at 105 South Main St.

Murals were requested by residents and business owners, who attended focus groups and thought about how they wanted to make the downtown business district more presentable, Amado-Belton said.

“The city really didn’t have any experience doing murals,” said Amado-Belton, who added the city had to turn in a plan to the state. “The city contracted with the Atlantic City Arts Foundation and its 48 Blocks program. They came over to help as to how to put a mural project together.”

The Atlantic City Arts Foundation reached out to find artists to do the murals, Amado-Belton said.

Murals are expensive to do, so the grant money made it possible for the city to start off with a couple, said Mayor Judy Ward.

“It just makes our blighted areas look so much more cheerful,” said Ward, who added more murals could be created if the city received more Neighborhood Preservation Program money. “It makes a big difference in the city.”

Belinda Manning, Max Manning’s daughter, who lives in the city, said her father met her mother in the city. They raised their children here, so it has always been a special place for them.

This is the second time Manning has been honored publicly by the city. Manning, who later became a role model for the city’s children, had the Park Avenue recreation field renamed the Max Manning Complex in 1993. Manning pitched in Atlantic City as one of the all stars for John Henry “Pop” Lloyd, another Negro Leagues great.

Manning supplied the pictures to Florida artists Sarah Painter and Cosby Hayes to create the mural of her father. For historical accuracy, she does want spectators to know that her father was not a left-handed pitcher, which the mural displays, but this doesn’t bother her personally.

“I think it’s artistically correct,” said Manning, who added the mural looks just like her father.

Around the corner, the mural of the girl with the followers, which is titled “We Bloom,” was created by Kelley Prevard, 31, of Atlantic City.

“When I spoke to the city of Pleasantville, they wanted something that would brighten up this corner,” Prevard said. “I wanted to create something that was joyful and bright and that would inspire people. I really hope I achieved that.”

The mural shows a girl with a seedling in a pot of dirt that is beginning to sprout into the shape of a heart, and the variety of flowers that may have come from the same pot.

“It represents the love and the growth that has happened in this community at large. Each flower is unique, and I would like to think that they represent the people of the community,” Prevard said.

Her child was the first case of a rare COVID-related illness in Atlantic County. She wants others to know the signs.

BRIGANTINE — Inside the Brigantine Community School, everything feels familiar. Teachers at the front of classrooms ask a question, and studen…

LINWOOD — Someone destroyed the roadside memorial dedicated to a Somers Point teen who was killed by a drunken driver in 2004, police said Thursday.

NASA touches down in Atlantic County, collaborates with FAA

EGG HARBOR TOWNSHIP — NASA made one giant leap into South Jersey by teaming up with the Federal Aviation Administration William J. Hughes Tech…

AtlantiCare will open up several new windows on its website to schedule COVID-19 vaccine appointments at the Atlantic City mega site this week.

ATLANTIC CITY — As a result of a continued increase in COVID-19 vaccine shipments, Atlantic County's vaccination mega site at the Atlantic Cit…

Students in Egg Harbor Township and Mainland Regional school districts will have an opportunity for more in-person education next month, accor…

Atlantic County officials on Saturday reported 67 new cases of COVID-19 and two new deaths, bringing its respective totals to 21,216 and 532.

Kelley Prevard, of Atlantic City, created the mural on the side of the El Sabor de la Esquina restaurant in Pleasantville.