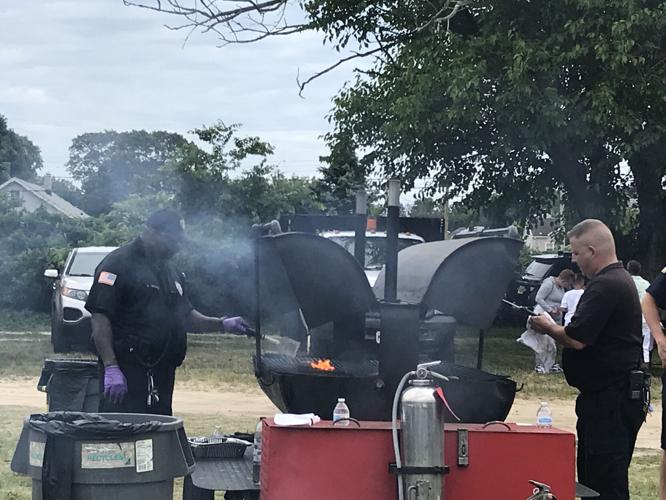 Pleasantville police work the grill Tuesday at the Coalition for a Safe Community cookout at Langston Avenue Park. 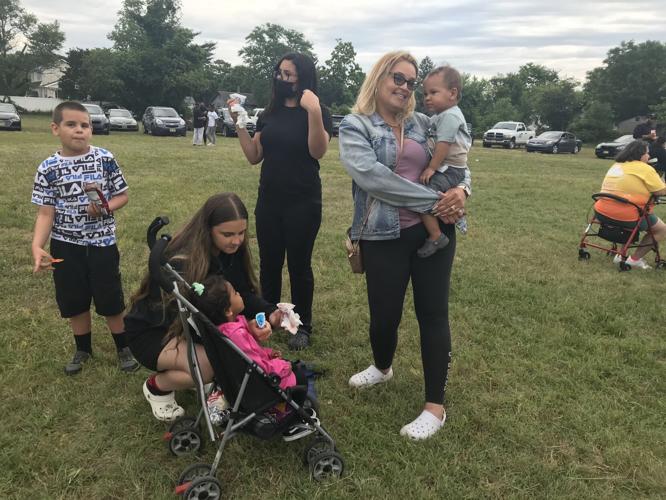 Iris Ruiz, center, brought her children and grandchildren to the cookout. As a patient navigator at AtlantiCare, Ruiz said the event could help her teach patients about the different mental health treatment programs available to them.

PLEASANTVILLE — The first day of summer was a chance to bring the community together for safety, wellness and fun.

The Coalition for a Safe Community hosted its first community cookout Tuesday afternoon with support from the city. Dozens of residents gathered at Langston Avenue Park for food, music and the opportunity to connect with a number of community-service and wellness providers.

Perry Mays, president of the coalition, said it was important for people to connect with public resources available to them after the COVID-19 pandemic had disrupted their livelihoods.

“It’s a good turnout. It’s really helped the community by getting services they so desperately need,” Mays said. “With this, it gives people the opportunity to get back on track.”

People lined up at the back of the park to get free food including hamburgers, cotton candy and water ice. Several groups had set up tents advertising educational, financial, health care and legal services, providing pamphlets and talking with interested passersby. The emcee of the event passed around a microphone to allow representatives from each group to explain to the crowd what they had to offer.

There was also a three-on-three basketball tournament being run on the court adjacent to the park, while a group of young children played an improvised game of pickup football out back.

Melida Castillo said the event was a good, family-friendly opportunity for adults and children to celebrate the start of summer. She said she was impressed by the lineup of service vendors who were able to come out to support those in need.

“It’s for the kids, so they can see their friends, it’s the end of the school year,” Castillo said. “I didn’t know they were going to have all the resources they have out here.”

Tyeisha Harvey, who was there with her children, said she learned about the cookout through a notice sent by a phone call from the school district. There was another after-school celebration for the children at the Leeds Avenue School on Tuesday, and she said she wanted to visit the Langston Avenue Park event, too.

“It’s very positive,” Harvey said. “Giving back to the community, I like that they have all these snacks for the kids.”

Gloradine “Gloria” Gause heard about the event earlier Tuesday. Living right behind the park, she decided to attend, citing the good she felt the gathering could do for the city. As a former employee of Pleasantville Public Schools and a 50-year city resident, Gause said she was especially hopeful events like the cookout could give children a safe outlet to have fun and learn.

Pleasantville fifth graders show off their smarts about the justice system

“We need to all participate and be on the same page, because we need our community to be safe,” Gause said. “And the more people that show up, show that they’re advocates of something positive in Pleasantville and not the negativity.”

Much of the event was centered on improving public safety and strengthening the community’s relationship with law enforcement and first responders. Police worked the grill, while representatives from the Atlantic County Prosecutor’s Office and Pleasantville Fire Department also were in attendance.

Police Officer Andre Graves helped man the grill. He said doing work to help the community is part of his duties on the force and he was glad to be able to contribute.

“We’re community police officers. When they say, ‘We need a hand,’ we step in, we do what we can do,” Graves said. “This is what we do, we love doing this.”

“This is our bag of chips, man, we love this stuff,” added Sgt. Mike Gazo, who noted that the cookout was the first large community event since the city’s National Night Out in 2019.

In addition to the police and Prosecutor’s Office, the Hope One van from the Atlantic County Sheriff’s Office was at the park. Hope One travels to different locations across the county to treat addiction. Many of the vendors were committed to promoting different aspects of public safety and health, and the event’s emcee pointed out that there were COVID-19 vaccines available at a tent toward the front of the park.

Students learn to cope with violence, life after COVID at Teen Summit at Atlantic Cape

Multiple members of City Council, as well as several school district officials, were present at the event.

Mayor Judy Ward said she was glad to see the city hold “face-to-face” events after they had been disrupted by the pandemic over the past 27 months. She also praised the depth of resources and providers at the event.

The event allowed some of the groups in attendance to learn more about the needs of the community.

Iris Ruiz was at the cookout with her children and grandchildren, taking advantage of a day off. As a patient navigator at AtlantiCare, Ruiz said the event could help her teach patients about the different mental health treatment programs available to them.

“I have a lot of patients that can benefit from this, so I’m definitely going to relay the information that I receive,” Ruiz said. “It will help me tremendously with my clients and my patients.”

Terron Oglesby was at a vendor table promoting WEHA Gospel 88.7 and 100.3 FM and had a similar view of the event. He said it helped him connect with local community leaders and government officials for whom he could broadcast useful information to his audience.

Jared Thomas said the cookout was helping him learn about how his website design company, afterimagerevolution.com, can help advance causes that would help the city. He said he has talked with different politicians, religious groups and advocacy organizations about what he can do.

“An event like this is a great opportunity for me to be able to figure out how I can help the community,” Thomas said.

Tuesday’s event was the first of four hosted by the Coalition for a Safe Community, which is active in Atlantic, Cape May and Salem counties, Mays said. The next one is scheduled for July 18 in Atlantic City. There will be two others in Atlantic City and Egg Harbor City whose dates are still to be determined.

ATLANTIC CITY — A three-alarm fire tore through a building on the Boardwalk Friday morning at New York Avenue, damaging five businesses and se…

Atlantic City cracking down on shoplifters, crime ahead of NAACP convention

Atlantic City man arrested after barricading himself in his home

ATLANTIC CITY — A wanted city man was arrested Thursday morning after barricading himself inside a residence with an acquaintance, police said.

ATLANTIC CITY — A boy and two men were arrested in separate incidents last week, resulting in the recovery of two handguns and drugs, police said.

Pleasantville police work the grill Tuesday at the Coalition for a Safe Community cookout at Langston Avenue Park.

Iris Ruiz, center, brought her children and grandchildren to the cookout. As a patient navigator at AtlantiCare, Ruiz said the event could help her teach patients about the different mental health treatment programs available to them.