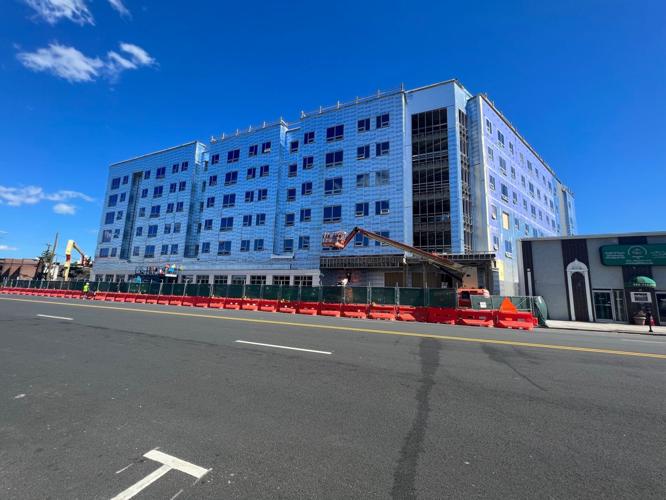 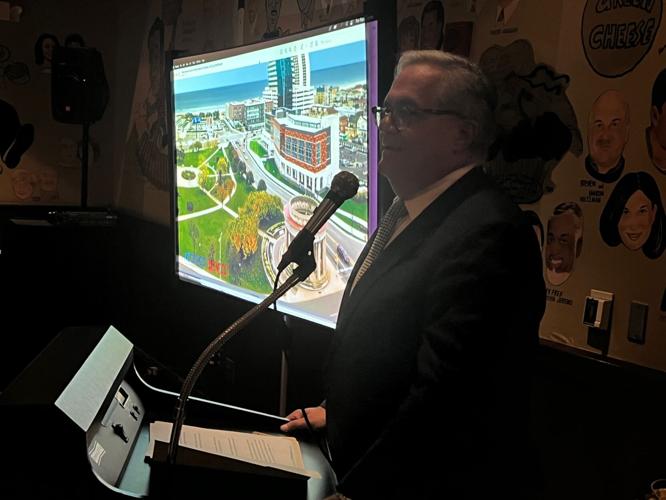 ATLANTIC CITY — Talks are underway between Stockton University and the Atlantic City Development Corp. about what Phase III of the school’s development in the resort will look like.

Chris Paladino, president of both the Atlantic City and New Brunswick development corporations, a pair of nonprofit redevelopment companies, said moving to Phase III of the project comes as crews are near finishing a new residence hall under Phase II.

A start date or timeline for the next phase of work has not been determined, Paladino said after addressing members of the Public Relations Council of Greater Atlantic City during a luncheon Tuesday at the Palm Restaurant at Tropicana Atlantic City.

“Stockton remains our major client,” Paladino said after addressing the council. “So we’re really waiting for them to make some determination about programming.”

AC Devco has partnered with Stockton to help the university establish and expand its city campus near the border of Ventnor, creating new jobs for a traditionally tourism-dependent economy.

Phases II and III are part of a $69.3 million expansion that began in 2018 to grow the university’s presence in the resort. Through Phases II, III and IV, Stockton intends to lengthen the city’s University District, stretching from the Chelsea Heights neighborhood to the Boardwalk.

The epidemic of childhood obesity has had a huge impact on New Jersey, but the state is star…

Phase II includes a new residence hall that will house 416 students. Phase III may include a new, mixed-use building spanning 300,000 to 500,000 square feet.

During his keynote address to the council, Paladino highlighted projects his company has undertaken around the state, including work in New Brunswick, Middlesex County.

Paladino over the years has contributed to 8.3 million square feet of residential, commercial, academic and institutional development projects valued at $3.5 billion.

In New Brunswick, Paladino is overseeing the development of the $750 million Rutgers Cancer Institute of New Jersey Jack and Sheryl Morris Cancer Center project, along with a new structured parking facility, a $55 million elementary school and a $730 million dedicated research, innovation and medical education facility.

ATLANTIC CITY — Mary Anne Mulhern said she was never an artistic person until five years ago.

“We need to find the opportunity to bring our children home,” Paladino told the luncheon crowd of about 70 people. “There’s a lot of smart, bright, hard-working kids that have accomplished great things.”

The new residence hall is being built on Atlantic Avenue, less than a block from the Knife and Fork Inn and near Stockton’s existing city campus.

The building, which fills the former Eldredge Building site, is six floors and 135,000 square feet. It will have 416 beds in apartment-style rooms, a lounge, meeting room, on-site laundry and access to the existing parking garage at Stockton’s Atlantic City campus, the university has said.

The residence hall is expected to be handed over to the university by May 2023, Paladino said. Officials expected it to welcome students by next fall.

Additionally, a loan provided by the Casino Reinvestment Development Authority is helping pay for the new building. That loan will be paid back by Stockton, Paladino said.

VENTNOR — The Ventnor Plaza will get a much needed facelift during the offseason, as its new owner plans to add restaurants, new tenants, sola…

Ventnor to host its first Halloween Fest on Oct. 22

VENTNOR — To help residents kick off Halloween and come together as a community, the city will host its first Halloween Fest, complete with a …

GALLOWAY TOWNSHIP — Stockton University has been named one of the top 100 public universities in the nation in the 2022-2023 U.S. News & W…

Who is Raphael Warnock, winner of Georgia's runoff election?

Who is Raphael Warnock, winner of Georgia's runoff election?

Study casts doubt on police use of facial technology

Study casts doubt on police use of facial technology