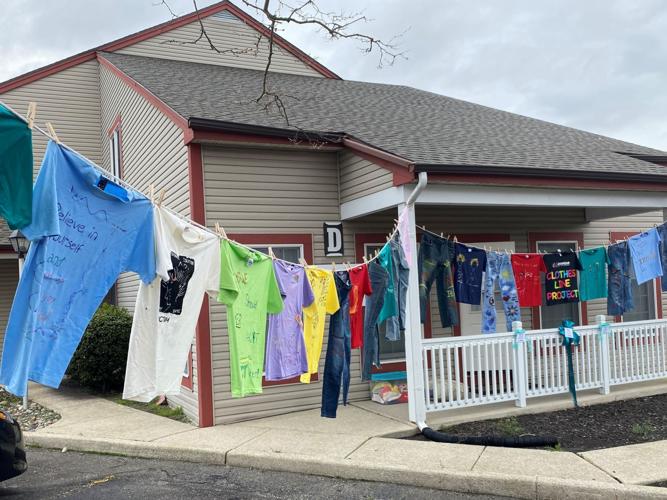 T-shirts displaying messages from survivors of sexual assault hang in front of the Avanzar building in Pleasantville on Friday as part of the Clothesline Project. 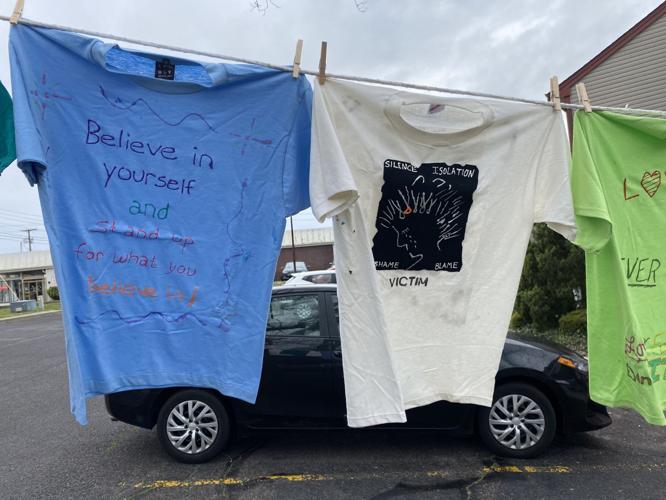 ‘The purpose of it when you display it is really encouraging individuals to walk around the clothesline, to read what the shirts say, so that other people can see what their experience has been,’ said Donna D’Andrea, legal service coordinator for Avanzar. 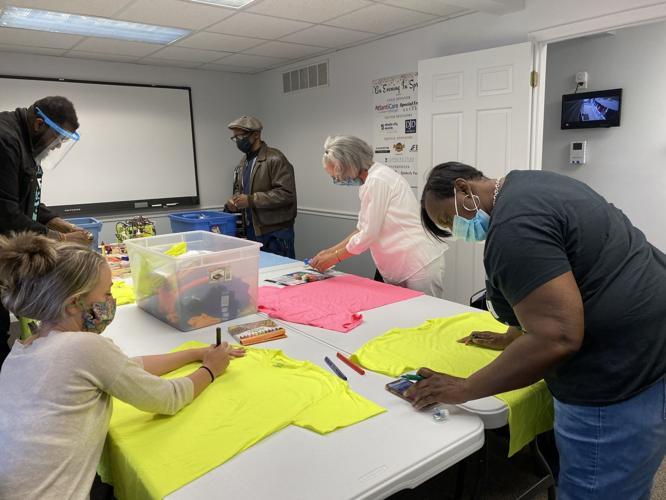 Staff and volunteers at Avanzar make T-shirts Friday as part of the Clothesline Project for Sexual Assault Awareness Month. 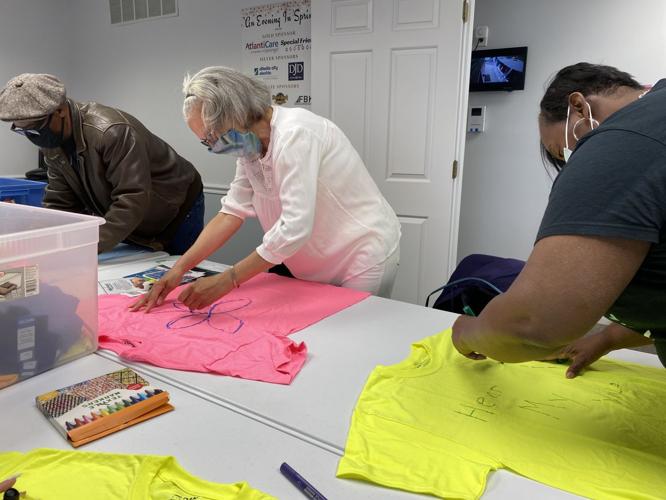 PLEASANTVILLE — Colorful T-shirts hung from a clothesline in front of an office building Friday fluttered in the wind like a Mexican papel picado garland hung for a party. But the messages they displayed were anything but cheerful: “Victim” and “survivor.”

On the 20th anniversary of Sexual Assault Awareness Month, volunteers and staff at Avanzar, the Atlantic County victim advocacy organization, are giving a voice to the often voiceless through the Clothesline Project.

Participants, usually victims or loved ones, created a T-shirt describing their experience or in memory of a loved one who is a victim of sexual assault or sexual violence. The project aims to increase awareness about the prevalence of sexual violence and honor those victimized.

“You want to think about it as a means of therapy to a certain extent,” said Donna D’Andrea, legal service coordinator for Avanzar, describing how survivors put into words or pictures or designs what their experience is or was. “The purpose of it when you display it is really encouraging individuals to walk around the clothesline, to read what the shirts say, so that other people can see what their experience has been.”

Avanzar has been participating in the Clothesline Project for 25 years.

“People will walk up and say, ‘How much are the shirts?’ And it’s like, did you read them? Because if you read it, you wouldn’t be asking the question,’” D’Andrea said. “Then it’s really just saying to them, ‘Just walk around, read the shirts and you’ll understand what I mean.’ And usually then, people get it.”

Statistics show sexual crimes are very common and victims have a hard time coming forward, although that is slowly changing thanks to the #MeToo movement.

A 2015 survey from the Centers for Disease Control and Prevention shows approximately 1 in 5 or an estimated 25.5 million women in the United States reported rape or attempted rape at some point in their lifetime, and about 2.6% of U.S. men (an estimated 2.8 million) experienced the same, with most regardless of gender being victimized before the age of 25.

A 2018 U.S. Department of Justice report shows the self-reported incidence of rape or sexual assault more than doubled from 1.4 victimizations per 1,000 people age 12 or older in 2017 to 2.7 in 2018. But despite the increase in self-reports, there was a decrease in reporting to police in those same years.

For many families, the reality of the COVID-19 pandemic means increased vulnerability to dom…

“A lot of our survivors are in the beginning processes of healing, and they share their story as a step to healing from the trauma they endured,” Miles-Jackson said.

D’Andrea said the #MeToo movement or reporting of sexual misconduct by people in power helps to validate other victims’ experiences, especially when their abuser is a pillar in the community.

“They can feel comfortable to say, ‘Oh my god, that happened to me, no wonder I feel the way I do,’” she said.

Valeria Marcus, of Atlantic City, a survivor of child abuse and domestic violence and a local victim advocate, said she came out Friday not just for herself but to support the many family members and friends who have also been victims of sexual assault.

While advocates say the first key to prevention of sexual assault is raising awareness, Marcus said she wants more people to not just be aware, but also to actively help victims.

“If you’re aware of anyone who has been sexually assaulted, abused, incest, too, I think you should get involved,” she said. “Call 911. Even if you have a suspicion. Everyone needs to learn the signs.”

She said to be a witness if you have to “and not stand in the background looking in.”

“I think if all communities get involved, to bring sexual assault awareness to their community, we can eradicate this and it will get better for victims and survivors,” Marcus said.

Rick Robinson likens the idea of building up to 98 wind turbines on the ocean horizon to placing them on the rim of the Grand Canyon. The Seve…

ATLANTIC CITY — The rate of violent crime in the resort has declined in the past year, but some merchants and a city official believe petty cr…

Odubel Herrera on Tuesday began his public return from a 2019 domestic violence incident in Atlantic City.

On a recent fall day, people from around South Jersey answered a call to share their stories of domestic violence.

T-shirts displaying messages from survivors of sexual assault hang in front of the Avanzar building in Pleasantville on Friday as part of the Clothesline Project.

‘The purpose of it when you display it is really encouraging individuals to walk around the clothesline, to read what the shirts say, so that other people can see what their experience has been,’ said Donna D’Andrea, legal service coordinator for Avanzar.

Staff and volunteers at Avanzar make T-shirts Friday as part of the Clothesline Project for Sexual Assault Awareness Month.