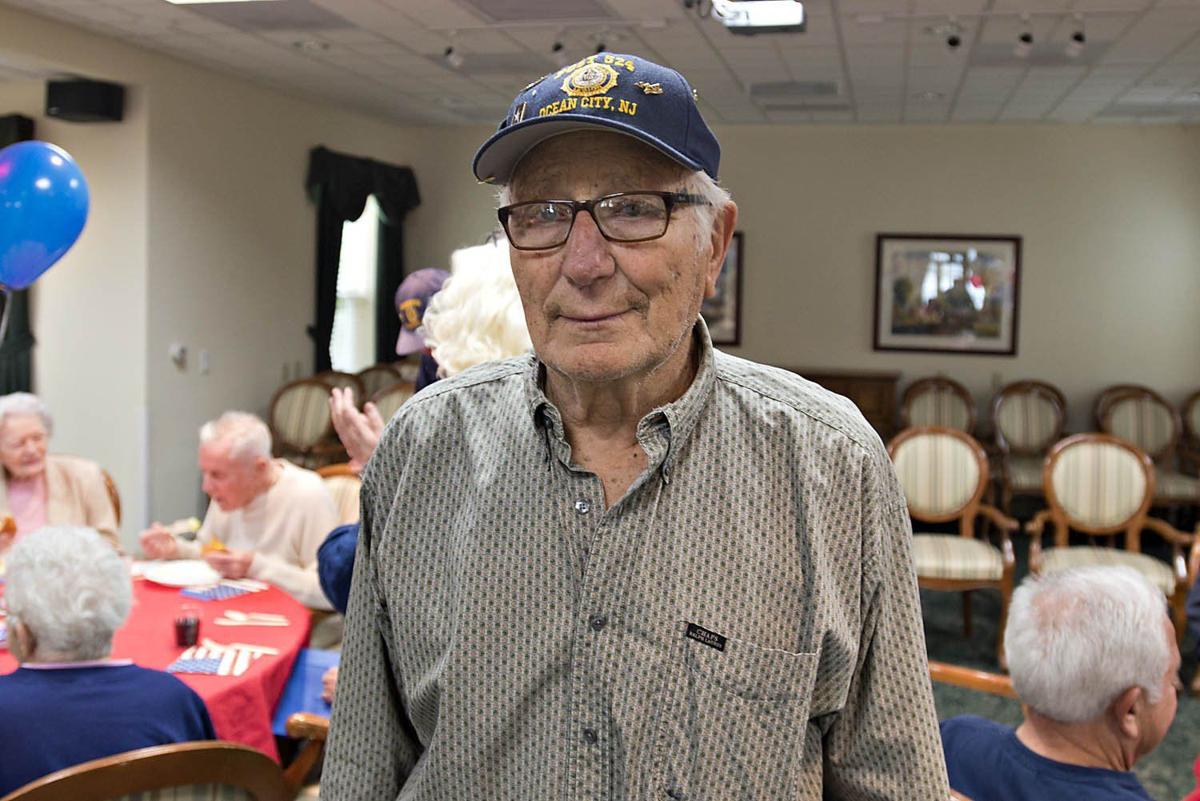 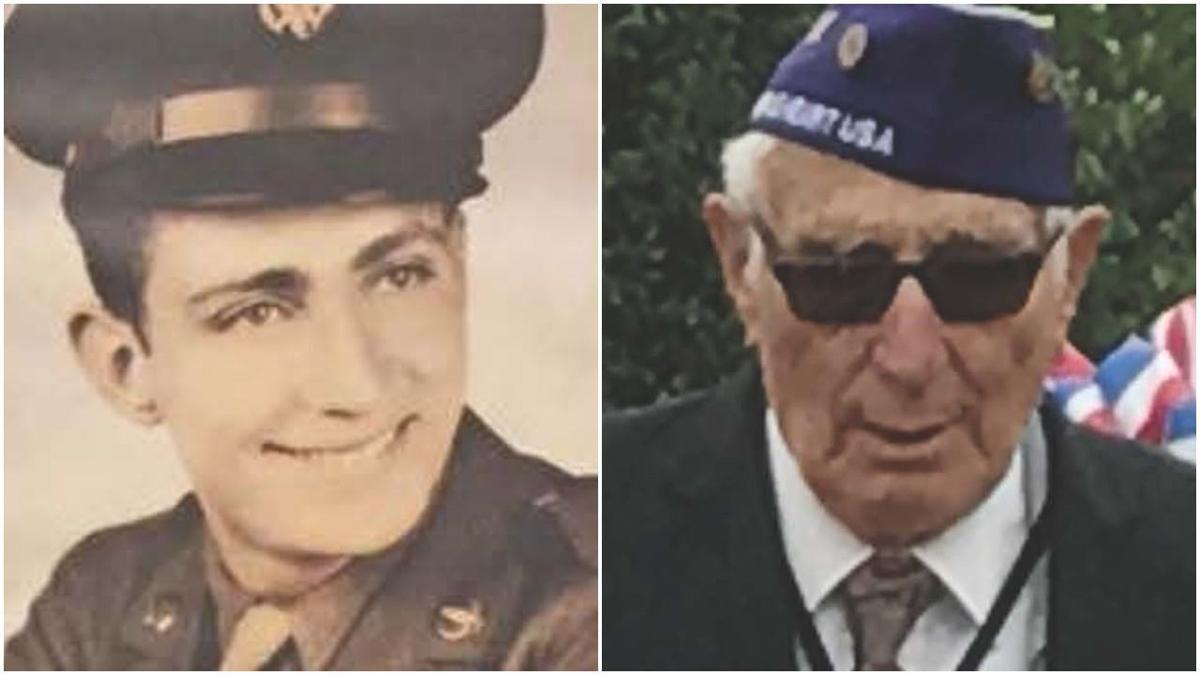 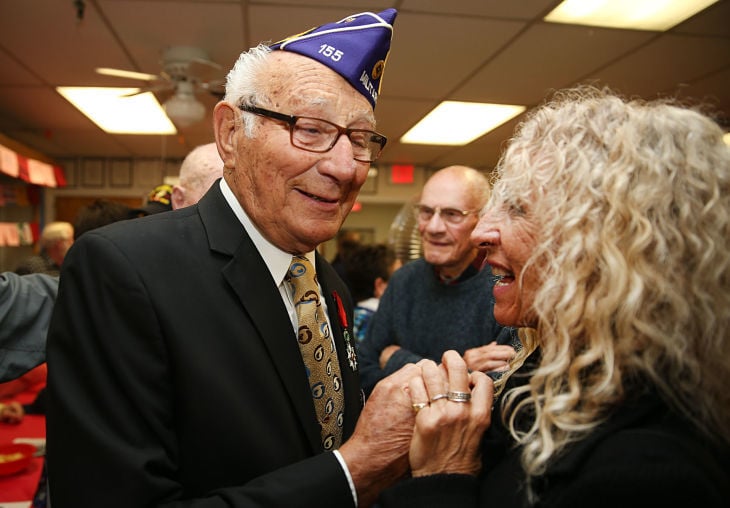 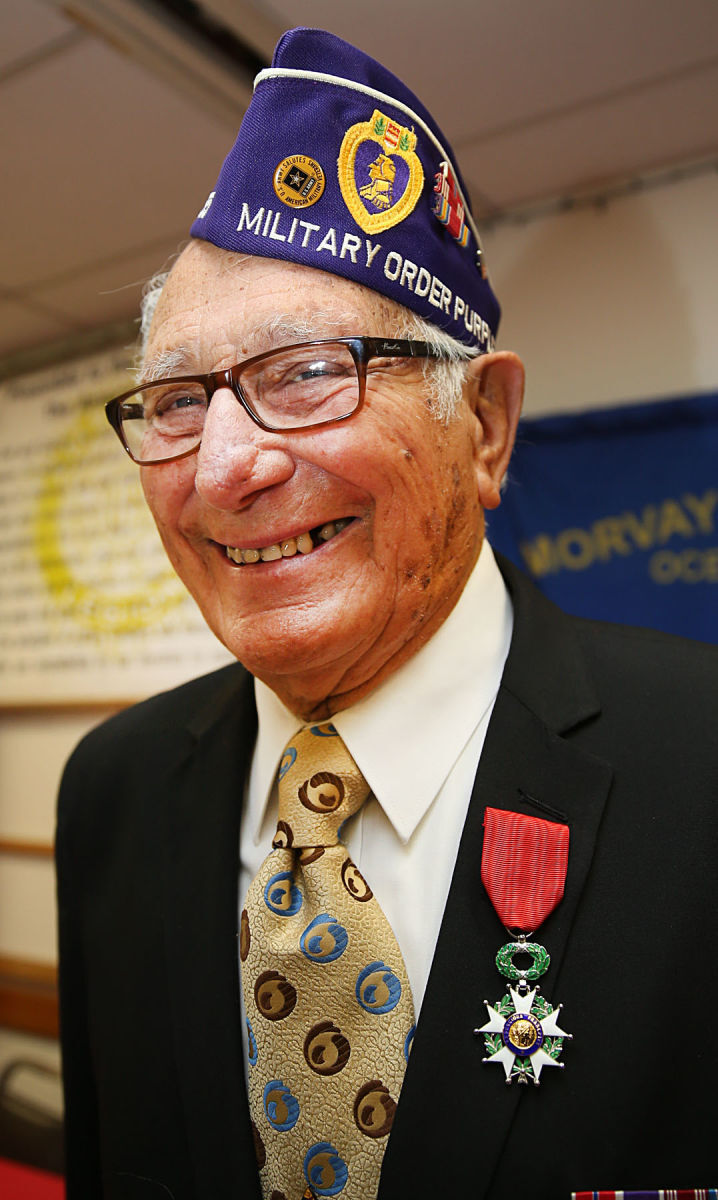 Caserta is celebrated in 2013 in Ocean City after receiving France’s Legion of Honor award for his service during the Battle of the Bulge. 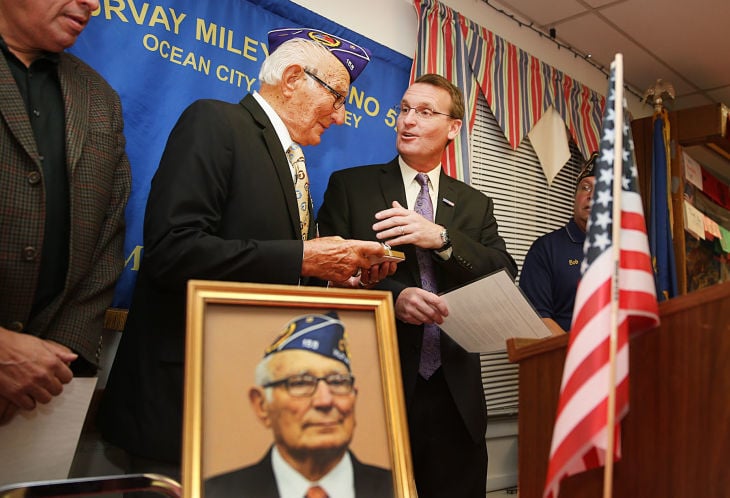 WWII veteran Sgt. Joe Caserta is presented with the key to the city by Ocean City Mayor Jay Gillian during a 2013 event celebrating Caserta receiving the France’s Legion of Honor.

He came home in one piece, grateful for the chance, and like thousands of veterans, he married, had a career, and raised a family. He and his wife, Eileen, had 70 years together before she died. They raised four sons and had eight grandchildren and 15 great- grandchildren.

Caserta died Feb. 5 of congestive heart failure. He was 98. His son Jess Caserta said his mind was sharp until the end.

“He was the last one. There are none left,” said Michael Morrisey, the post commander. Morrisey said Caserta loved being part of life at the post, participating in events and spending time with friends. His fellow veterans loved him back, greeting him warmly and enjoying his company, Morrisey said.

“He was a fixture at our place,” he said. “He was like royalty walking into the room. He was just absolutely terrific. I feel like I’ve lost my grandfather.”

Morrisey and Caserta bonded as soon as they met, when Morrisey first became involved with the local post.

“He found out that we were in the same unit,” Morrisey said.

Caserta served in Company E of the 32nd Armored regiment, 3rd Armored Division in World War II. He landed at Omaha Beach in Normandy and took his tank across northern France, participating in the Battle of the Bulge, a fierce wintertime fight and the final major Nazi offensive of the war.

Caserta was awarded a Purple Heart, the Bronze Star and a distinguished Unit Citation, and in front of an appreciative crowd at the Ocean City Library auditorium in 2013, he accepted the award of Chevalier of the French Legion of Honor for his participation in the liberation of France.

Morrisey was in the army a generation later, stationed in Germany in 1968, before he was sent to Vietnam, also with the 3rd Armored, known as “Spearhead.” That connection was enough for Caserta, who quickly became a friend and mentor.

“He took a liking to me instantly,” Morrisey said. “He made it fun. He taught me so much and helped me tremendously.”

The chance to spend time with fellow combat veterans is vital, at least for Morrisey, as he believes it was for Caserta. Morrisey said the chance to let your guard down, to talk freely and to feel comfortable with people who understand can be immensely healing and rejuvenating.

“We need the camaraderie,” Morrisey said. The talk ranges from their time in the service to recent events, but it’s never war stories, he said.

Jess Caserta said his father was immensely proud of his service. But he did not attend reunions or spend much time with other veterans until about 20 years ago.

“He didn’t really talk about it a lot when I was a kid,” he said.

Caserta was from another generation than most of the current VFW members, many of whom served in Vietnam. That was never important.

“He loved being one of the guys,” Morrisey said. “A bunch of infantry boys just sitting around bullshitting.”

For the past year, that beloved pastime was unavailable. The post has been closed because of restrictions related to COVID-19, and with his health, Caserta could not take chances. Morrisey said it breaks his heart that someone who so loved spending time with people had to be so isolated for the last year of his life.

Earlier, Caserta was a regular participant in veterans’ events, and Jess said he enjoyed his time at the post.

“That’s what he looked forward to every Wednesday, dinner at the VFW,” he said.

Caserta ran a full-service gas and mechanic shop in southwest Philadelphia, vacationing with the kids at the shore each year. Joseph loved boating and tennis.

He enjoyed vacations in Ocean City starting in the 1960s. They bought a summer home in the 1970s. He moved to the beach town full time in 1985.

“He took up tennis when he was 40, and he played locally until he was 94,” Jess Caserta said. “Moving to the shore and having that tennis really extended his life.”

Four years ago, Jess moved in with his parents.

“Mom and dad were getting older. I was here for both of them,” he said.

When his mother, Eileen Caserta, died in 2018, Jess said, the connections with fellow veterans became even more important to his father. In February 2019, writer Adam Makos released the book “Spearhead: An American Tank Gunner, His Enemy and a Collision of Lives in World War II” about a tank with the 3rd Armored Division and the battle in Cologne.

Jess Caserta said he recently learned that there will be a movie made of the book, and that his father will be included as a character.

“A member of our Greatest Generation, Joe Caserta, known as ‘Tanker Joe,’ helped blaze the path from the beaches of Normandy to Berlin. Thank you, Joe, for your service and heroism. Our condolences to his loved ones,” Murphy wrote.

“Ocean City is fortunate to be home to many people like Joe, who was dedicated to serving his country and community. But Joe was definitely special, not only for his bravery in the war, but because he was so well-known and well-liked around town. He and Eileen celebrated 70 years of marriage before she passed away in 2018. The rest of us would be extremely fortunate to have lives so well-lived,” he said.

Caserta is survived by his four sons, Joseph, Michael, Tom and Jess, and their wives, as well as by his grandchildren and great-grandchildren and his brother-in-law Jess Vandevere. A funeral Mass on Saturday was attended by immediate family and livestreamed as well.

The family asks in lieu of flowers, memorial contributions be made to the Ocean City VFW and American Legion posts at oceancitynjvfw.org and legion5524ocnj.org.

Caserta is celebrated in 2013 in Ocean City after receiving France’s Legion of Honor award for his service during the Battle of the Bulge.

WWII veteran Sgt. Joe Caserta is presented with the key to the city by Ocean City Mayor Jay Gillian during a 2013 event celebrating Caserta receiving the France’s Legion of Honor.