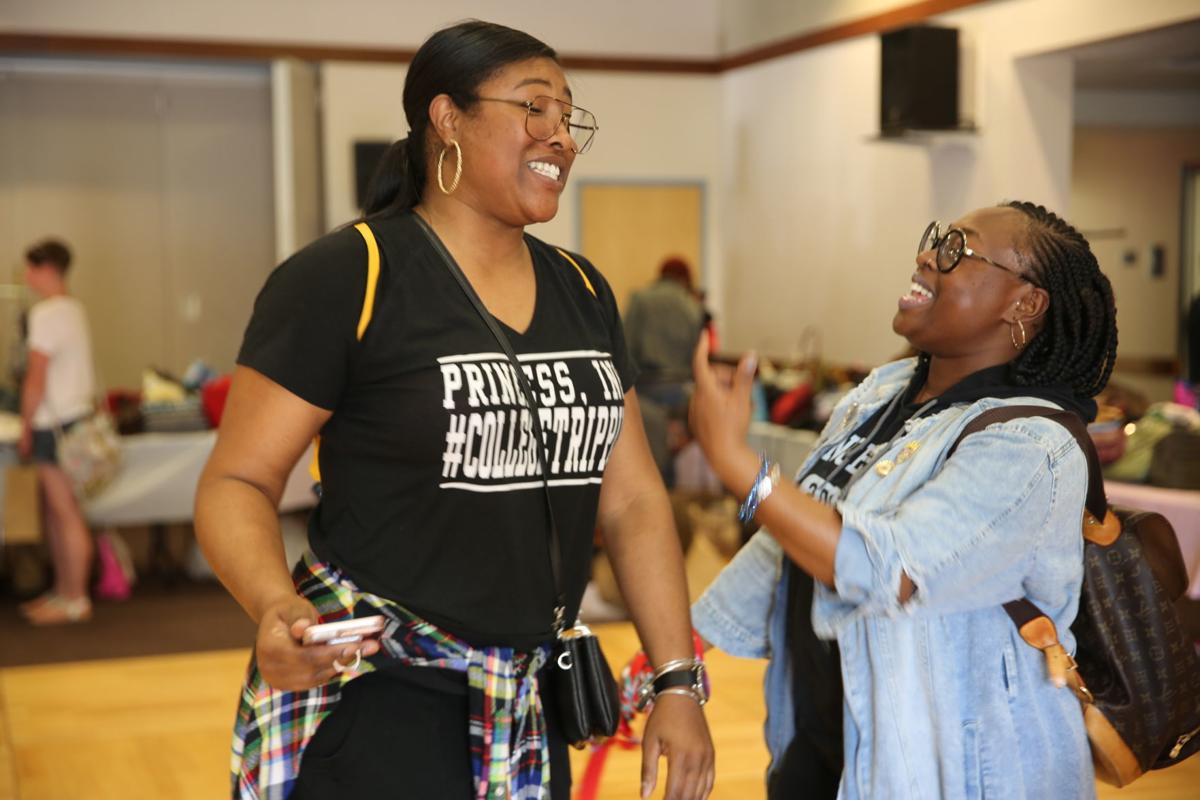 Automne Bennett, left, and Indra Owens, the founders of Princess Inc., hosted the Pack Your Purse event Saturday at the All Wars Memorial Building. 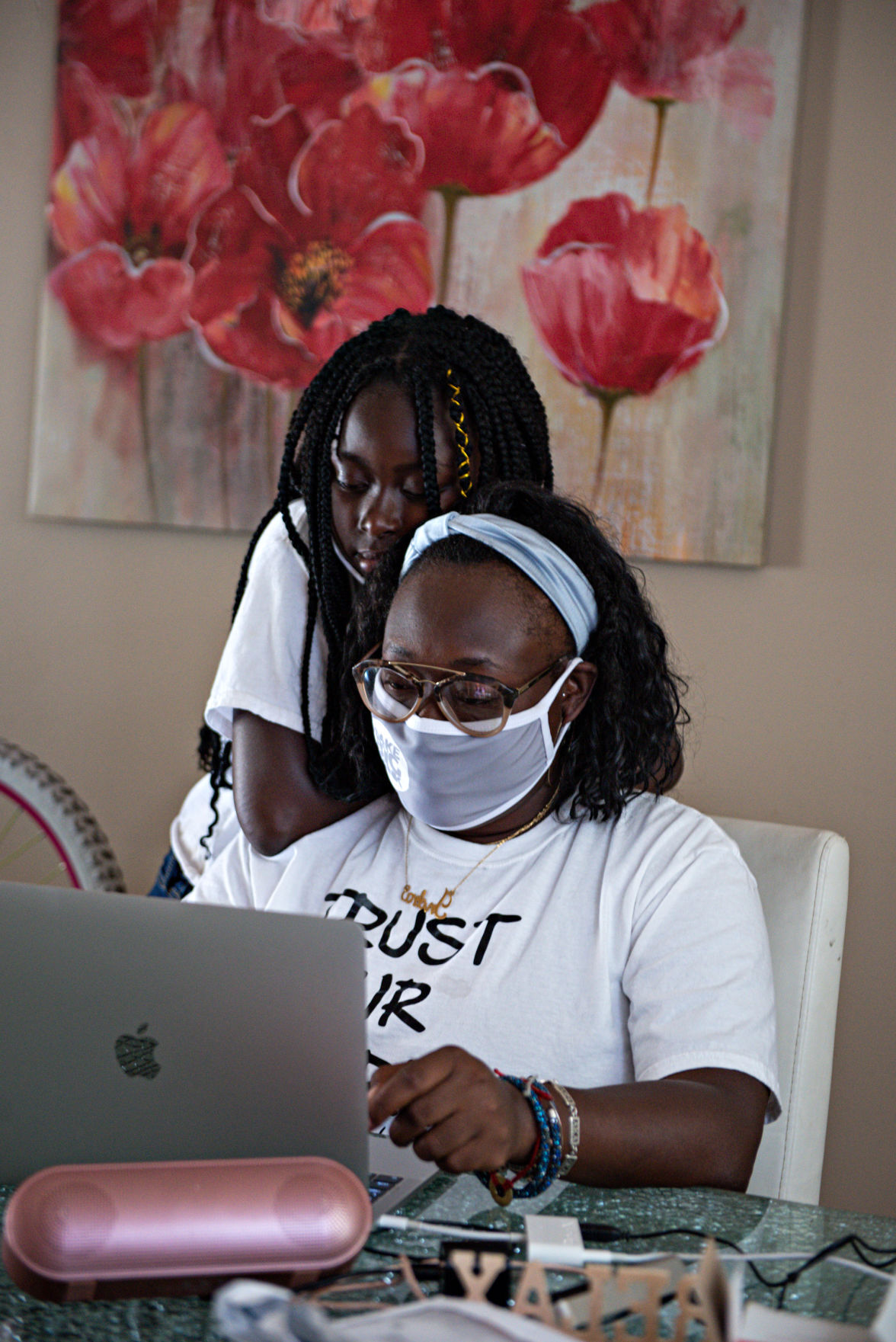 On July 21st, in Atlantic City, Indra Owen talks about her new book "Trust Your Journey", which is about mental health and building resilience by giving parents the tools to communicate with their children and empower them. Owen and her daughter Journey (left) photographed in their home.

ATLANTIC CITY — Automne Bennett knows what eye strain feels like. She’s worn glasses since the second grade, and now, as an adult, she works in an office with artificial light, her eyes scanning across two computer monitors each day.

So, when Indra Owens walked into a city restaurant a few weeks ago to meet her, explaining her idea to help mitigate eye strain for students learning virtually across the resort due to the spread of COVID-19, Bennett called it a “divine download from God,” but one that would not be easily accomplished.

“Our eyes need the break,” Bennet said during a phone interview Tuesday. “We are inundated with technology. And technology is going to kill us if we let it.”

Owens and Bennett, the founders of Princess Inc., a city nonprofit that fosters mentoring, education, empowerment and community service, are working to provide each student across all 11 city schools with blue light glasses, a tool that aims to filter out the blue light from digital screens and reduce eye strain, through partnerships with sponsors and private donors.

And, while experts say there’s a lack of evidence supporting the glasses’ effectiveness, the pair argue that it’s a preventative measure that will not only work while students are learning virtually, but also when they’re playing video games or scrolling social media after the school day ends.

“Imagine all the kids right now whose vision is fine, but now who’s to say they go back to the doctor and they have terrible vision from the strain in their eyes,” Bennet said.

Officials at the American Academy of Ophthalmology argue there is no evidence showing blue light from electronic devices is harmful or damaging to eyes, advising instead to take frequent breaks, reduce brightness settings and using artificial tears to lubricate dry eyes.

But those steps are just not practical for young people, Bennet said, who might be apt to take breaks during virtual learning, but stare intently at screens for video games and social media for hours on end.

“The blue light is addictive, if you ask me,” she said. “No one wants to pull their eyes away.”

Owens said that eye strain has affected her, too, as well as her young daughter, Journey.

“I know how I’m feeling, being in front of a computer, and I know how my kid feels,” she said, explaining that new tools need to be available.

But it’s an expensive undertaking, Bennet said. Age and gender play a role in the size and fit of the glasses.

But, the group has already locked down one sponsor, Robert Williams, owner of Absecon-based TMarquise Entertainment, who signed up to be a sponsor for the Venice Park School.

“I just have a habit of giving back and I always say, ‘You don’t have to be a millionaire to be a philanthropist,’” he said. “If I see a good cause, I like to help any way I can. I understand the need for these kids to have these glasses, especially now with everyone being virtual.”

The goal is to have a pair of the glasses to each student in the district by March, Bennett said.

“This is long-term health,” Bennett said. “COVID is having a ripple effect and Princess Inc. is trying to find a way to support our family, children and the community, and give them the resources that are practical and useful.”

He thought he was over COVID-19, then he had a stroke

Troy Randle's COVID-19 symptoms were difficult yet bearable. After recovering from fever, cough and a headache that started in late March, he …

Automne Bennett, left, and Indra Owens, the founders of Princess Inc., hosted the Pack Your Purse event Saturday at the All Wars Memorial Building.

On July 21st, in Atlantic City, Indra Owen talks about her new book "Trust Your Journey", which is about mental health and building resilience by giving parents the tools to communicate with their children and empower them. Owen and her daughter Journey (left) photographed in their home.