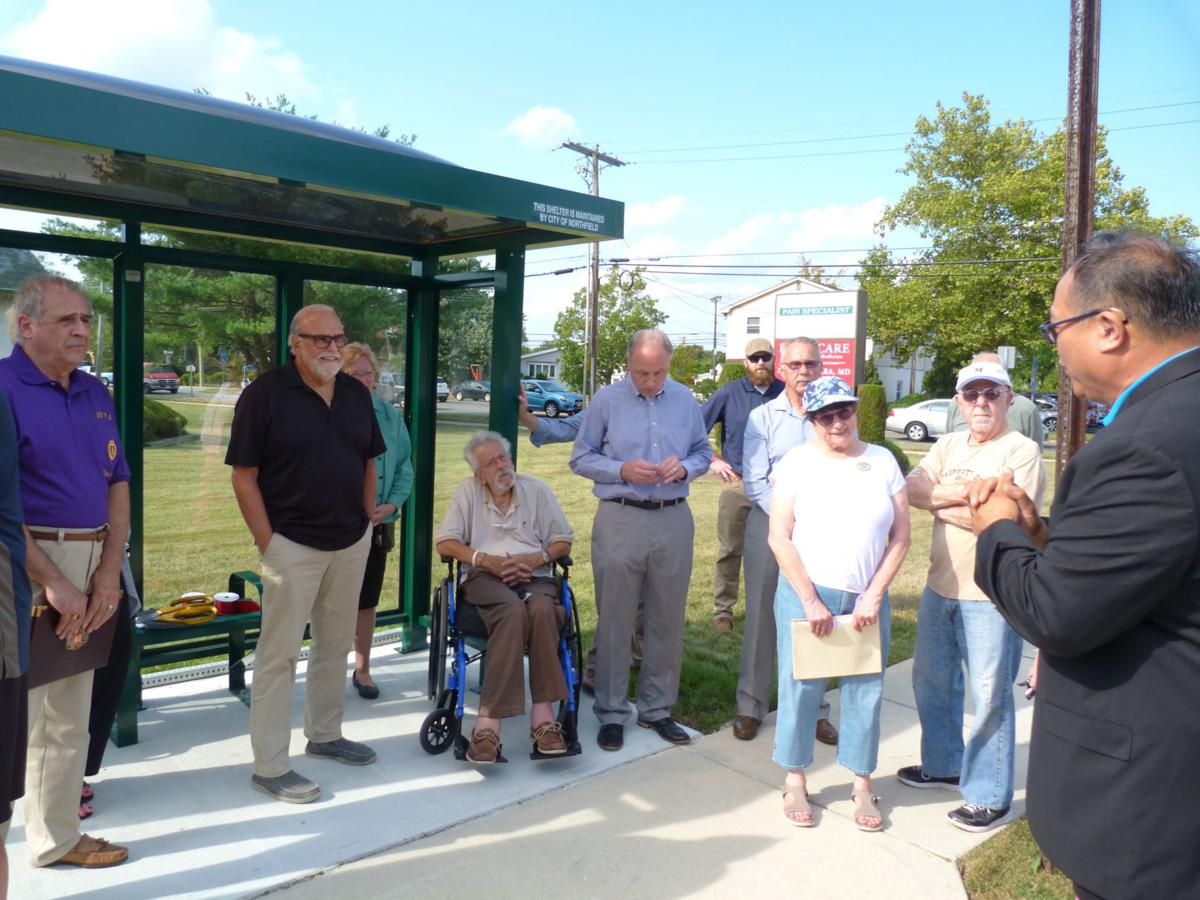 Northfield Mayor Erland Chau, right, says it took nearly three years to get bus shelters installed outside and across the street from the VA clinic on New Road. 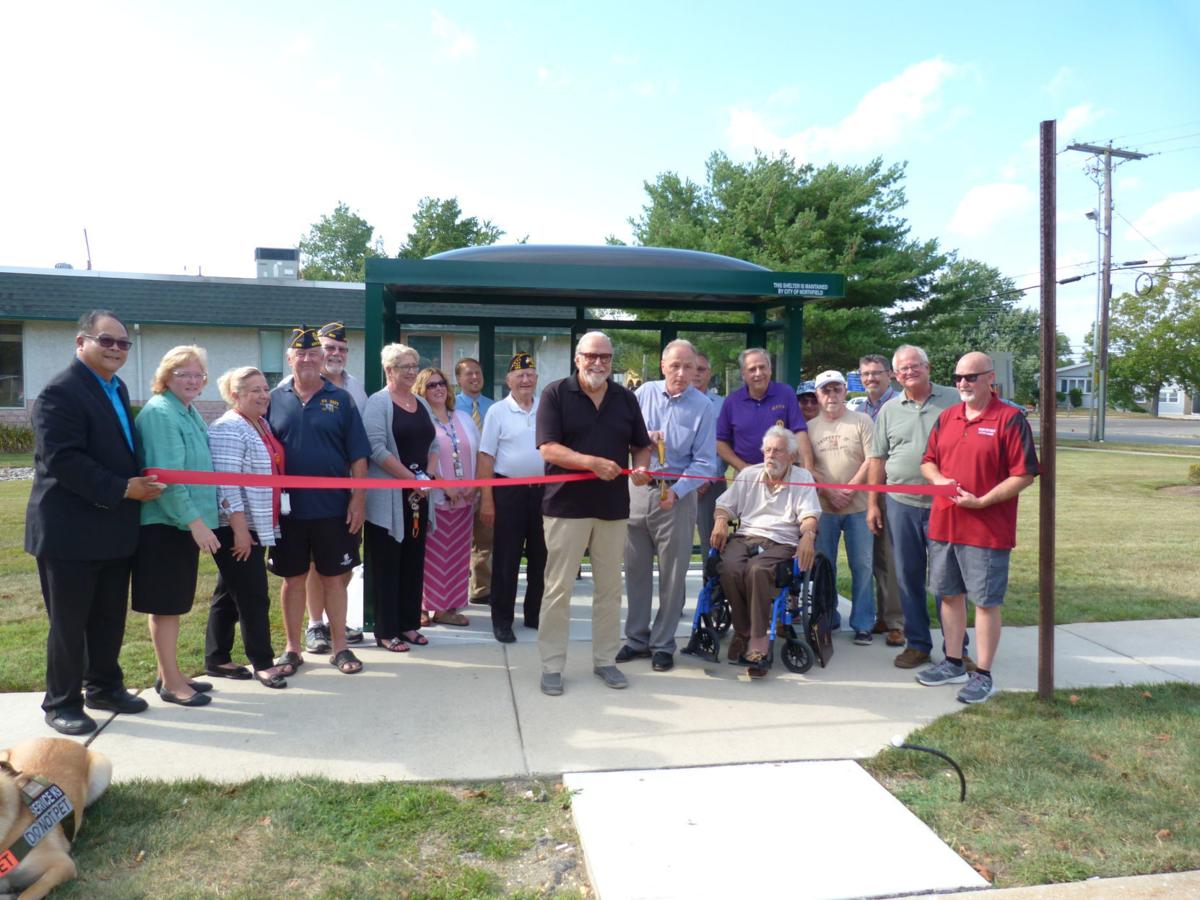 NORTHFIELD — At first glance, the two green bus shelters on the north and south sides of New Road near Mill Road do not appear to be anything special.

But a group of more than 25 people including local and regional politicians and veterans gathered Wednesday for a ceremonial ribbon-cutting outside the U.S. Department of Veterans Affairs’ Community Based Outpatient Clinic tell a different story.

“This is just human dignity for our veterans who are coming to our city to go to the VA clinic, keeping the rain or snow off them while they wait for the bus or keeping them out of the sun while they wait on a hot summer day,” said Mayor Erland Chau. “I am just so glad that we were finally able to see this through.”

Across South Jersey, efforts have been made to increase access to care for veterans, who previously had to drive to the VA hospital in Delaware for services. Cape May County in February hired an architectural firm to renovate the former Kmart site in Middle Township into county offices and a new veterans clinic. The VA will pay $1.3 million toward renovations, then pay rent to the county for use of the space, according to county officials. The Cape clinic is expected to open next year.

In Atlantic County, the Vet Center, which provides free therapy and other mental health resources for combat veterans from Atlantic, Cape May, Cumberland, Salem and Camden counties, relocated in June from Ventnor to a larger space in Egg Harbor Township.

The Northfield VA clinic provides outpatient care, including medical care, medication management, health care, lab services, mental and addiction and recovery services. It also acts as a transportation hub for shuttles and buses to take veterans to other VA and non-VA health care facilities through the Veterans Transportation Program.

Chau told the group gathered last week it took nearly three years to get the bus shelters at the Northfield clinic approved and built. He added they were funded through a state grant and are for use by anyone waiting for a bus, not just veterans.

Local VA heath care facilities to be smoke-free by October

WILMINGTON, Del. — The Veterans Health Administration has announced a new policy that will h…

His first battle came from the Northfield School District, where he faced opposition over the installation of a covered bus stop adjacent to school property near the intersection, even though NJ Transit buses had been stopping at that corner for more than 10 years at a traditional, non-covered stop. Several school board members said they feared undesirables would be attracted to the covered bus stop. The approval and easement from the school district came once it was agreed to have a fence surround the stop on three sides and block any access to school property.

Chau also had to seek approval from Dr. Morris Antebi because one of the stops is on his property. Next came approval from the state Department of Transportation because New Road is a state road.

“This is about access,” said Bob Frolow, Atlantic County veterans service officer. “This clinic is here to offer services to our veterans, and many of them use public transportation. This is just basic decency for our veterans.”

Frolow said there is a big push by the U.S. Department of Veterans Affairs to tackle the problem of veterans suicide.

“We have guys that need the services offered here, including mental health services. Guys who are struggling need to come into the clinic, and they will find reasons not to come in, like rain or snow, and what happens? They stay home alone. That’s not helpful to them. Hopefully, they will know they are not going to be sitting in the rain waiting for a bus, and that is one wall that comes down for them. Every wall that comes down and gives vets better access is a big deal,” he said.

Cynthia Murray, director of the Community Based Outpatient Clinic, lamented the length of time it took for the bus stop to be approved and completed.

“It took three years to get this bus stop approved to help keep our veterans out of the weather. I am really glad our veterans, who volunteered to serve their country and protect all of us, did not wait three years to make their decision to serve in the military,” said Murray. “The Northfield site was chosen in large part because of the access to public transportation. Now, the veterans will be able to come and go to the clinic with a little more dignity knowing that the community cares and they will not have to wait unprotected from the rain, snow and heat. This is a big deal for our people.”

CAPE MAY COURT HOUSE — Starting at the end of this month, 31,320 rabies vaccine baits will be distributed by hand and helicopter throughout ma…

A strip mall parking lot isn’t typically the first stop families want to make on their way to a shore vacation.

Military service is among the most meaningful duties. Generations of men and women form a core part of this nation’s identity: personal sacrif…

Northfield Mayor Erland Chau, right, says it took nearly three years to get bus shelters installed outside and across the street from the VA clinic on New Road.