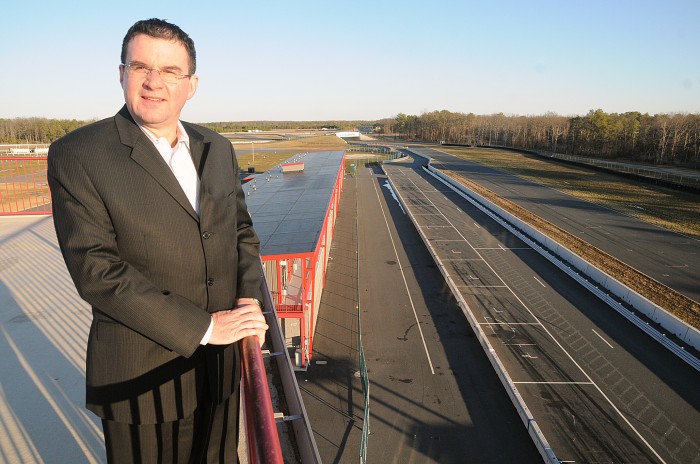 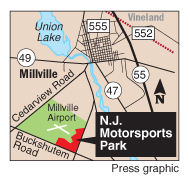 MILLVILLE — The New Jersey Motorsports Park filed for bankruptcy Monday. Operators say the bad economy has stalled the residential and retail development on which they depended for full financial success.

The filing for Chapter 11 bankruptcy protection — less than three years after the park opened — will allow for debt restructuring and the addition of new equity that operators say will allow the facility to remain open.

Park officials would not comment on exact details of the Chapter 11 action. A U.S. Bankruptcy Court spokeswoman, Deputy-in-Charge Mary Shashaty, said the agency had not received a filing involving any of the names under which the park’s owners operate.

However, park owner and managing partner Lee Brahin said in a statement that the filing was “necessary to protect future operations and to allow the park to continue providing employment and other economic support to the local and regional communities.”

Park officials, who held a job fair about two weeks ago, said the park will operate for the 2011 season, adding that while the racing aspect of the facility was progressing well, the money from planned luxury villas, retail space and hotels never materialized.

Co-owner Joe Savaro said one of the park’s main “profit centers” was to be its potential real estate development.

“When we opened in 2008, it was the beginning of the worst recession in economic times in 50 or 60 years,” Savaro said. “We never were really able to develop … that commercial or residential aspect. That clearly has been a struggle for us from the very beginning. We don’t see the residential market turning in 2011. It will be a challenge to get hotel financing in New Jersey to begin with. We were kind of stymied on both of those for the foreseeable 2011 calendar year.”

City officials and park vendors said they were notified of the bankruptcy action Monday morning.

“It’s certainly hugely disappointing, and I hope that they can navigate the path forward,” city Economic Development Director Don Ayres said. “There’s a huge concern from all of us here, especially the local vendors and what happens to them in this process.”

The city has spent about $9 million on site remediation for the park. Much of that involved building water and sewer lines to which the park could connect.

Ayres said the park also has a $600,000 Urban Enterprise Zone, or UEZ, loan that financed some startup costs. The park is current on its UEZ loan payments, he said.

“We do have personal guarantees from the principals, so we fully expect that we will continue to be paid,” Ayres said.

Some vendors contacted Monday by The Press of Atlantic City declined comment, saying they first wanted to learn more about what was happening.

Park General Manager Brad Scott said the facility has a wide array of vendors who provide services such as food, marketing, fuel and office and cleaning supplies.

“Vendors who are creditors will be paid back according to the petition under Chapter 11,” Scott said. “We don’t know what it is now. The petition is filed, and the decision is made from there regarding payment.”

Located on about 700 acres next to the city’s municipal airport, the park has drawn a mix of praise and contempt since it opened in 2008.

Supporters called the park a jobs catalyst and something sorely needed in Cumberland County, which has the worst economy in the state. Opponents claim it is falling short of job delivery, and residents who live next to the park say the noise from the facility is destroying their quality of life.

Original plans called for a mix of racing, residential and retail. The park’s website advertises plans that include a world-class road course, an “exclusive motorsports racing club,” luxury “trackside Villa homes” and a “first-class karting facility where anyone can experience the thrill of motorsports behind the wheel for the first time.”

Scott said attendance at the racing events is “pretty close to where we had projected.”

City officials said the park’s land and buildings are assessed at slightly more than $23 million. The park paid $172,559.94 in property taxes in 2010.

Park attorney Jeff DiLazzero said in October that the facility has spent more than $45 million on capital improvements to its property. About half of that money was paid to Cumberland County contractors employing union labor, he said, with the rest paid to other southern New Jersey contractors that also use union labor.

In its first two seasons of operation, track officials said the facility has paid more than $3.8 million in wages to full- and part-time employees.

Scott said the park employs between 250 and 300 workers, with only about 22 or 25 being full-time staff. The rest are part-time and seasonal workers, he said.

The park held its most recent job fair Feb. 22, and it snowed that day.

“The turnout was not as dominant as in prior years,” Scott said. “We have a lot of open positions and filled a lot of positions during that job fair.”

Businesses in the area said they benefit from the park.

Craig Smith, an owner of Executive Protection and Investigative Consultants, said he and his partner opened their business in Millville in part because of the park.

Smith said his company is talking with park officials about providing security for some events. He said the last talks occurred about two weeks ago and that he was “putting some prices together” for park officials.

“I still think they’re going to be OK,” Smith said. “Brad reassured us that everything is going to be fine in the long run.”

“I’ve seen customers,” he said. “All the restaurants in town benefit. Car owners and club members, they’re an above-income group, and they have the time to shop and eat. Everyone around here is very busy during the racing season.”

Ayres said the park is directly responsible for the construction of two hotels in Vineland and one in Millville, and the planning of several others in the area.

But not everyone is happy.

The biggest concern from residents living near the park is the noise it produces.

Some days, depending on atmospheric conditions, sound from the park can be heard as far away as Vineland and Port Elizabeth in Maurice River Township. The City Commission frequently hears from residents angry about the noise.

The anti-noise group TrackRacket has sued the park and the city, alleging the track is a nuisance and that it has contributed to decreased property values. A Superior Court judge dismissed Millville from the case in August.

Park opponents have some support on City Commission: Panel member Dave Vanaman said he has never been to the park and likely will never go there.

March 2003: City officials had first discussions with the park’s ownership group about bringing the New Jersey Motorsports Park to Millville.

July 4, 2008: Park opens with car club weekend for its own Drivers Club. The event is not open to the public.

May 22, 2009: Construction begins on eight units for the Villas at Breighton. The condos are the first nonracing construction built since the park opened. The villas are now complete and the park has not announced additional construction.

Sept. 4, 2009: The park hosts the AMA Pro Superbike Championships for the first time. The AMA event is the park's highest attended event each year.

April 30, 2010: Park opens third season with its own motorcycle series: New Jersey Road Race Series featuring riders from the Championship Cup Series. The park expands its schedule and has more than twice as many public events this year than in the first two years.

April 30, 2011: The park will open its fourth year with "The Devil in the Dark" 12-hour race featuring the Sports Car Club of America.

A U.S. Bankruptcy Court judge on Thursday approved a cash collateral plan that allows the New Jersey Motorsports Park to open on Saturday.

The Absolut Cycling Experience will go on as planned Saturday and Sunday at the New Jersey Motorsports Park.