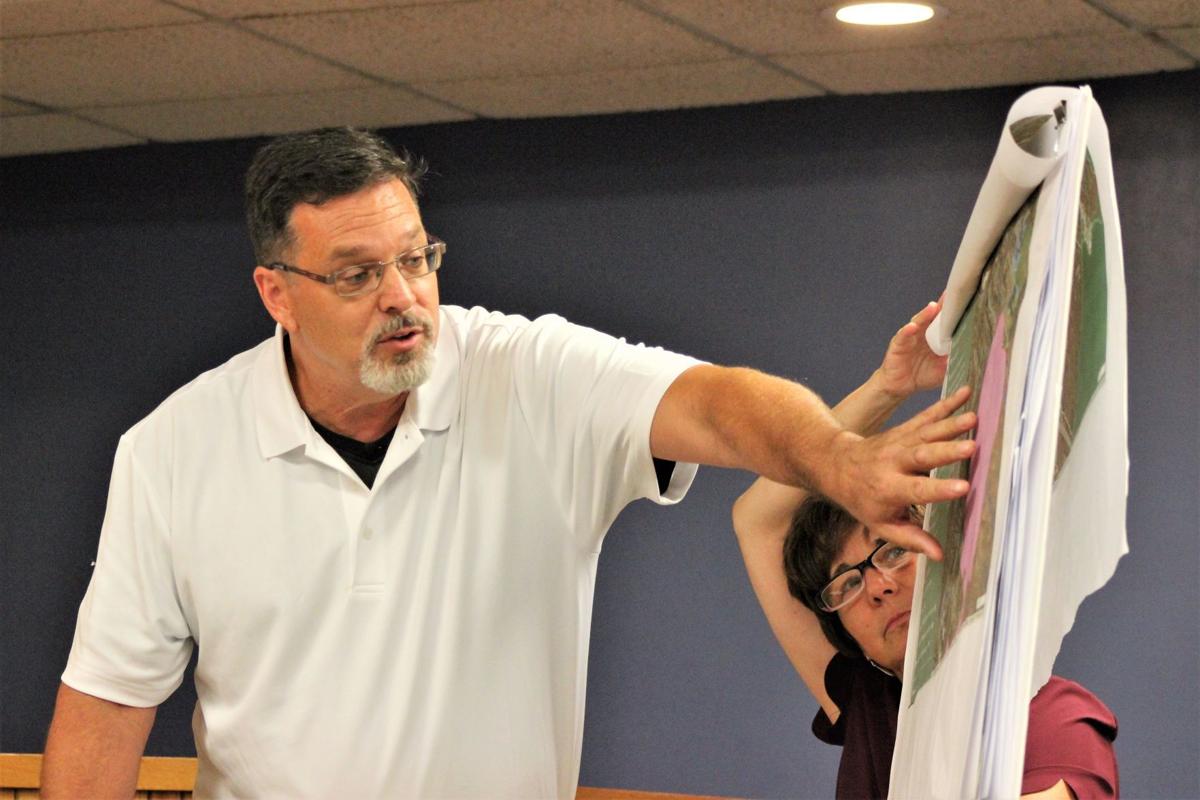 Jim Quirk tells Middle Township Committee of his belief the owner of Laguna Oaks golf course and residential development has sought to drain protected wetlands, while wife Lisa Quirk holds the display in place. Neighbors criticized the developer, but so far the state has found no wrongdoing. 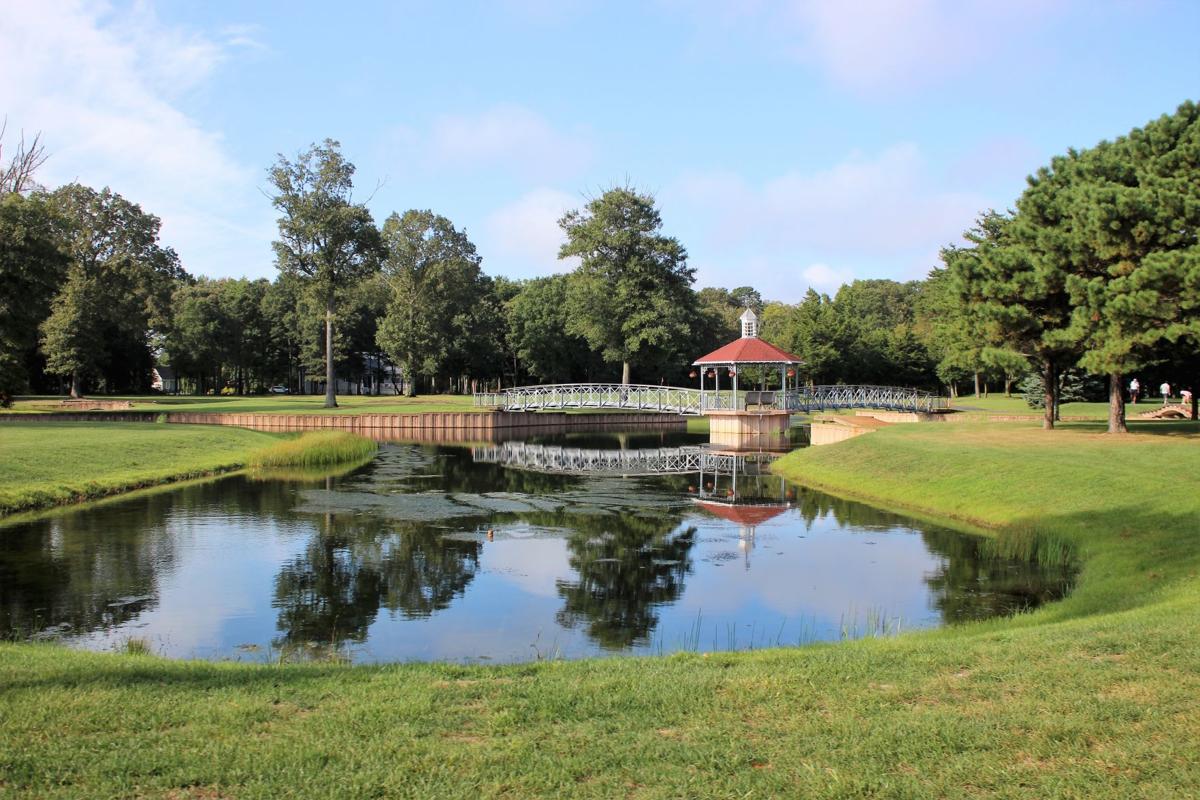 The latest phase of development at Laguna Oaks awaits state CAFRA approval. Developers say the existing golf course will be reconfigured for the 25 new units planned. 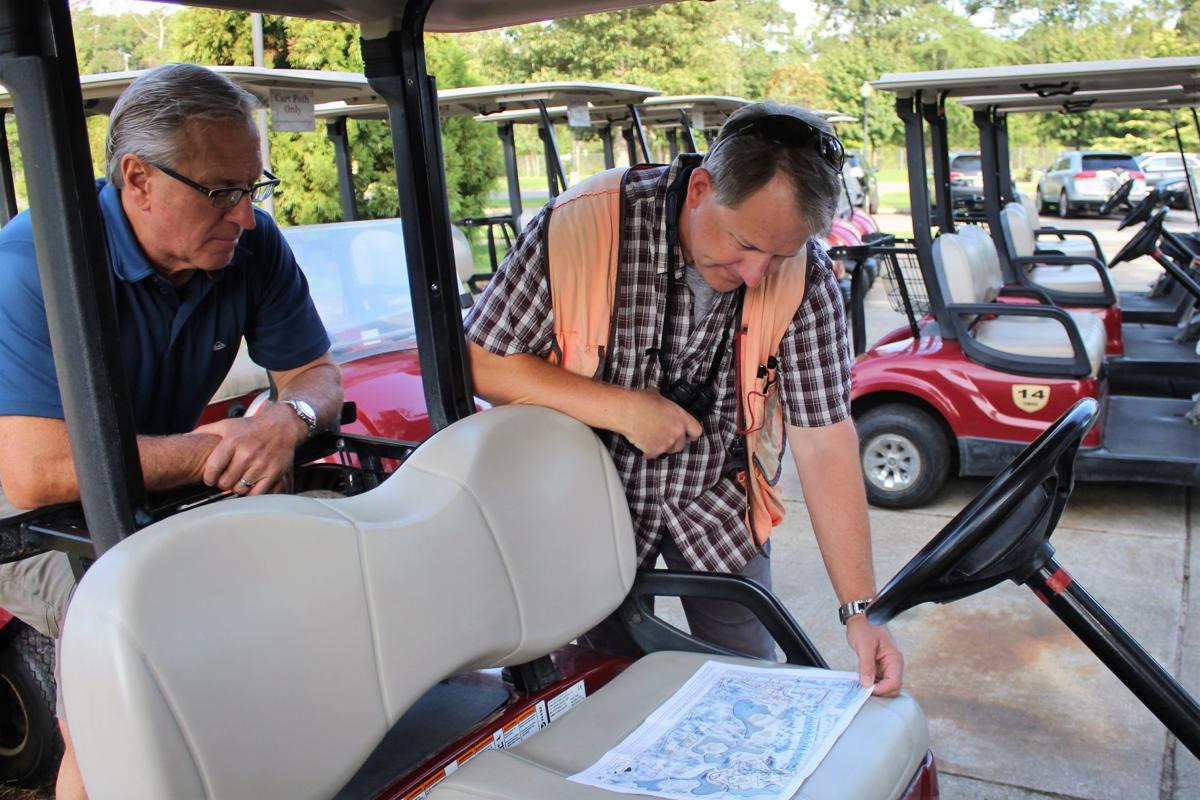 Will Morey, left, and environmental consultant Peter Lomax discuss plans for new townhouses at Laguna Oaks, a golf course and housing development east of the Garden State Parkway. They say the work will take place on already developed land, but neighbors have been critical of the plans. 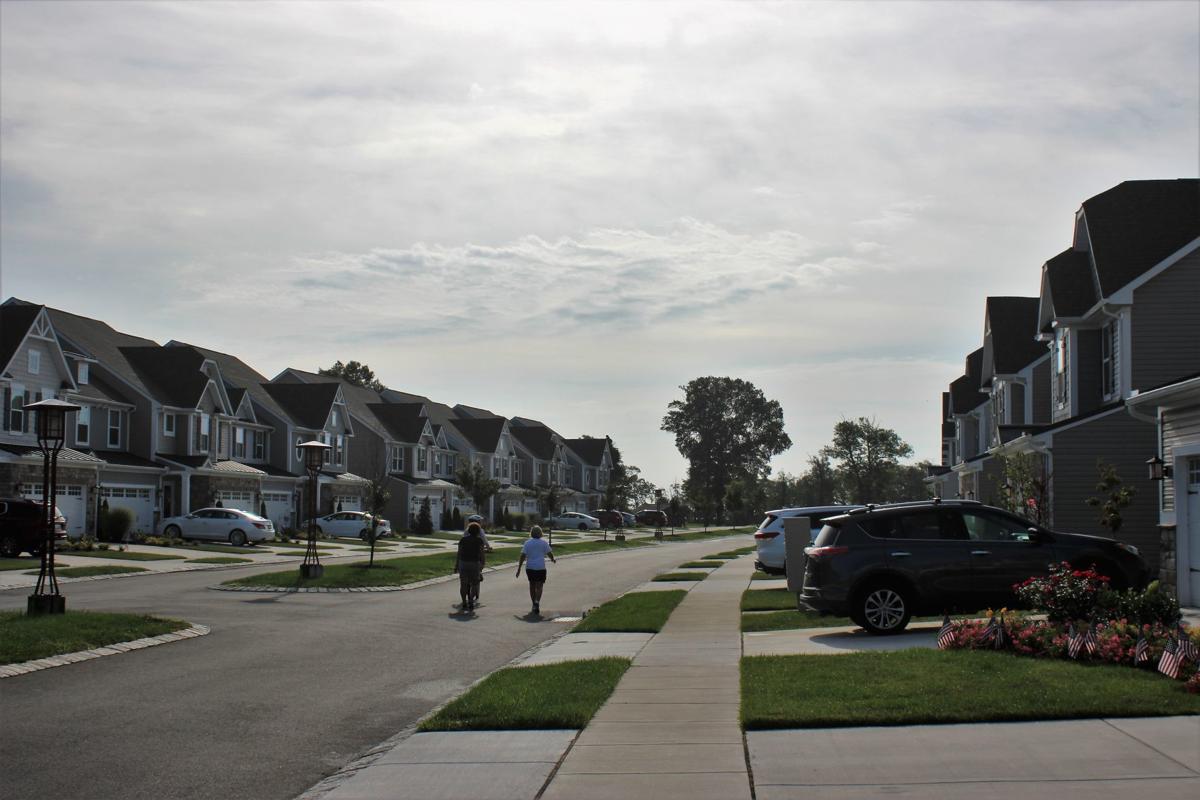 Forty-five townhouses were built north of Laguna Oaks golf course in 2018, with a plan for 25 more awaiting state approval.

MIDDLE TOWNSHIP — On a humid September morning, a queue of golfers lined up at the first hole of Laguna Oaks, a par-3 course off Bayberry Drive just east of the Garden State Parkway.

The course, an unusual 10 holes, was once planned as the first step toward an 18-hole course, in a long process that began with developer Fred Langford in the 1990s. To the east, past a line of trees and phragmites, lies a stretch of marsh leading down to Stab Creek and the series of inlets, bays and marshy islands separating Middle Township from Stone Harbor.

To the south is Langford Boulevard, the sparsely developed, high-end single-home community. To the north are a double line of townhouses, with more planned. The first phase saw 45 townhouses completed in 2018, with a proposal for 25 more units awaiting state approval.

The latest development, and what may happen after that, has the neighbors to the north concerned. A group of homeowners from Colonial Avenue and East Pacific Avenue near Middle Township High School has asked Township Committee to block further development.

MIDDLE TOWNSHIP — In a vote split along party lines, Township Committee on Monday approved a…

Several residents attended the Aug. 19 meeting to criticize the development, and to accuse the developers of riding roughshod over environmental regulations. They described the area between the marsh and the parkway as a unique and precious environmental resource.

“We’re here to protest the township’s complicity in the step-by-step efforts of developers Fred Langford and Will Morey, aided by Lomax Consulting, to destroy what’s left of the natural habitat that’s at the heart of our neighborhood,” said Michael Zukerman, a resident of nearby Benny’s Landing Road. “This beautiful natural habitat is why dozens of us have chosen to live in this section of the township,” he said.

In an extensive presentation during the public comment portion of the meeting, residents accused the local government of failing to act to protect the area, and Langford of violating protections, alleging he dug ditches to drain water from protected freshwater wetlands.

Attempts to contact Langford were unsuccessful. Morey, a Cape May County freeholder and principal in Morey’s Piers in Wildwood, denied any wrongdoing on the part of the developer.

According to Morey, Langford has been a family friend for about 70 years, beginning with Morey’s father. He said the Morey organization has provided financial help, along with administrative and managerial support.

“In June 2018, when foreclosure loomed and with it the removal of the golf course in favor of other use, my family formalized our assistance by executing a management agreement between Morey Development Corporation (MDC) and Mr. Langford,” Morey wrote in an email. “Through this agreement, MDC agreed to devote capital and project management resources to assist Mr. Langford in the completion of the Laguna Oaks homes and community.”

At the committee meeting, resident Jim Quirk suggested the golf course was just a means to bring development to the site and said the day after he asked Mayor Tim Donohue for help preserving the area, township trucks were out clearing brush. He said the crews told him their orders came from the mayor.

“That’s a lie. I’m not going to let you lie,” responded Donohue.

“But we do know that Middle Township trucks came and plowed through the wetlands,” Quirk said.

“I’m not saying it didn’t happen. I’m saying I didn’t order anybody to do it. And we have a right-of-way there that needs to be kept clear,” Donohue said. He later said he was not sure what the neighbors wanted the township to do.

Township Administrator Kim Krauss said the accusations were under investigation by the state Department of Environmental Protection.

In an opinion piece, Middle mayor mocks concept that all Republicans are white supremacists

“We can’t do anything further until the DEP tells us there’s a violation. There’s nothing we can do as a governing body,” she said.

The DEP did not respond to a request for comment.

On Monday, Morey and environmental consultant Peter Lomax toured the site. According to Lomax, the proposed additional units have site plan and subdivision approval from the township Planning Board and will be placed on areas already developed, including the parking lot of the golf course and where there is now a maintenance area.

The new townhomes will be built under a partnership with Ryan Homes and start at about $300,000, Morey said.

The course will be reconfigured but remain, Morey said. It may be reduced to nine holes. Golf courses are in a financially challenging period, he said, but he described the course as Langford’s dream.

According to Morey, accusations that wetlands were being drained were unfounded. He said the accusation stems from a misunderstanding of the history and topography of the property that is being manipulated by the neighbors opposing the project.

He said Langford has preserved part of the property as open space in perpetuity as part of the approval process.

“Simply and directly stated, there is no credible basis on which to conclude that local municipal officials have ‘rubber-stamped’ the approvals required to have Laguna Oaks proceed or that the state has not engaged in a thorough and responsible review throughout its quarter-century of Laguna Oaks permitting history,” Morey wrote.

According to Morey, a number of uses fall within the natural heritage priority site, including other golf courses, neighborhoods and the parkway.

But neighbors insist further development should be blocked.

“We have a government to protect the people in the community from this exact kind of overreach by developers,” Quirk told Township Committee. “I’d just ask you folks to look into this, to find out what’s really going on over there and to protect this land. We should not be building on that land.”

MIDDLE TOWNSHIP — Sewer systems are not usually seen as a fascinating topic for most people. Township Administrator Kim Krauss may be the exception.

MIDDLE TOWNSHIP — Crime is down throughout the township, with a steep drop in the Rio Grande section, police Chief Christopher Leusner told To…

As some skate parks have become an asset to their towns, others have been shuttered due to safety reasons.

Jim Quirk tells Middle Township Committee of his belief the owner of Laguna Oaks golf course and residential development has sought to drain protected wetlands, while wife Lisa Quirk holds the display in place. Neighbors criticized the developer, but so far the state has found no wrongdoing.

The latest phase of development at Laguna Oaks awaits state CAFRA approval. Developers say the existing golf course will be reconfigured for the 25 new units planned.

Will Morey, left, and environmental consultant Peter Lomax discuss plans for new townhouses at Laguna Oaks, a golf course and housing development east of the Garden State Parkway. They say the work will take place on already developed land, but neighbors have been critical of the plans.

Forty-five townhouses were built north of Laguna Oaks golf course in 2018, with a plan for 25 more awaiting state approval.