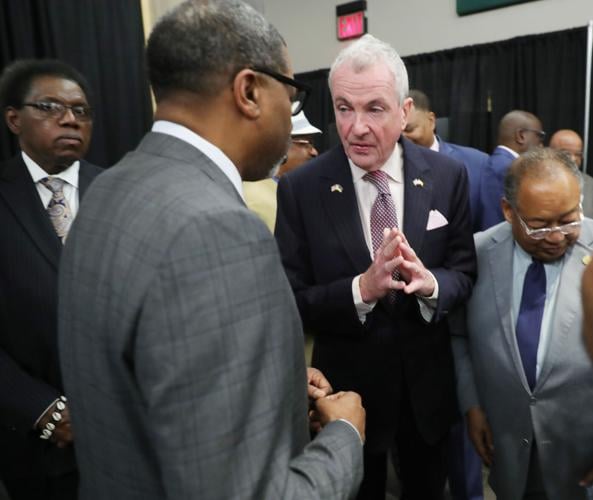 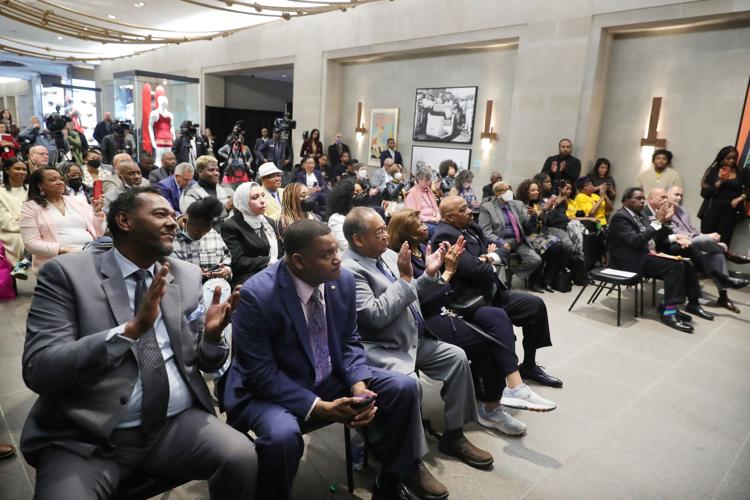 Audience members fill the atrium of Jim Whelan Boardwalk Hall for a news conference outlining plans for the NAACP convention this summer in Atlantic City.

ATLANTIC CITY — One organizer of this year’s national NAACP convention was here when the resort last hosted the civil rights organization in 1955, and she remembers a disturbing event.

Someone let loose white rats in the dining room of the group’s annual awards dinner, she said, in a hateful effort to ruin it.

“The FBI was there,” said Hazel Dukes, who is co-chairing the convention planning group, at a news conference in which national, state and local NAACP officials celebrated coming to Atlantic City from July 14 to 21. “They must have known something was going to happen.”

No one responsible was ever caught, Dukes said.

Dukes attended in 1955 as a youth member. Now, many NAACP leaders and Gov. Phil Murphy, who is a former board member for the national group, consider her a mentor.

The nation has come a long way since then, said Derrick Johnson, NAACP’s national president and CEO, but not far enough.

“Despite enormous wins for representation, our civil rights remain under attack,” Johnson said. The convention will tackle some of the toughest issues, he said, with a theme of #ThisIsPower.

“What is the definition of power?” asked Johnson. “The capacity to make things happen or prevent things from happening. That’s power.”

Attendees will seek solutions to pressing issues like educational and health inequities, and the need to improve policing so Black neighborhoods are safe and not victimized by police. And the convention will determine the NAACP’s policy agenda priorities for 2022-23, organizers said.

President Joe Biden and Vice President Kamala Harris have been invited to attend, organizers said, and U.S. Rep. James E. Clyburn of South Carolina will be on hand to receive the NAACP’s highest award.

Big name speakers are expected but will be announced later, they said.

Asked whether the city is concerned that national attention could harm it, like it did in 1964 when the Democratic National Convention came to town and publicity centered on its crumbling hotels and poverty, Mayor Marty Small Sr. said the city is ready.

“That was then, this is now,” Small said. “We are a town that thrives on the hospitality industry, we do big events like no one else ... we are going to be prepared.”

Small said the city is working with others to secure big name entertainment acts for the week. “We want to show the world what Atlantic City is. We can show you better than we tell you.”

Registration will be open to all, not just NAACP members, they said.

“New Jersey has a rich history in the fight for equality, and we are honored to build on our legacy and host this year’s convention,” said Murphy, who stopped in briefly. He was also in town to attend an offshore wind conference.

Murphy cited South Jersey’s historical ties to Harriet Tubman, who worked as a cook for a time in Cape May and brought enslaved people north to freedom; and Fannie Lou Hamer making her famous speech about Black people being “sick and tired of being sick and tired” at the 1964 Democratic National Convention, where she fought for the right of Black Mississippians to be seated at the convention.

National Board Chair Leon Russell said it’s been three years since the NAACP met in person due to COVID-19.

“Those three years have quite frankly changed this nation,” Russell said, adding it’s time for the Black community to realize its power and take action.

“One of the things most important for us to lift up is health care,” Russell said, especially after the pandemic highlighted inequities as it hit Black communities hardest. “We have to talk about the negative impacts of racism on the delivery of health care in this nation.”

The Black community exercised its power by getting out the vote for Democrats in the 2020 election that put Biden in office, Johnson said, and made something else important happen.

“Just three short weeks ago a sister was appointed to the U.S. Supreme Court,” Johnson said. “That wouldn’t have happened without turning out the vote in 2020, despite efforts to suffocate our voices.”

He does not want the NAACP to get caught up in distracting debates about the value of critical race theory or the operations of the Black Lives Matter movement, Johnson said.

“I’m excited to see young people take to the street,” Johnson said. “We don’t have time for us vs. us. The power is in us standing together.”

But he said the answer is not defunding the police, calling that idea “foolhardy.”

“At the same time the police should be accountable and not preying on our communities,” Johnson said.

“Thank you all for believing in Atlantic City,” said City Councilman Kaleem Shabazz, who is also the president of the local NAACP chapter. “We do conventions in Atlantic City — that’s what we do. In the next 73 days, we are continuing to be prepared and united in making sure this convention is outstanding.”

Shabazz said the local chapter set a goal of getting 300 local youth registered to participate, and has asked the mayor and business leaders to help raise funds for their fees.

“We want local youth to see leadership, to see power and get excited,” Shabazz said.

The local chapter is also preparing a brochure of Black businesses to be distributed to attendees, “so you know where to go and shop, to barber shops, beauty parlors, restaurants and others.”

The NAACP was founded Feb. 12, 1909, in New York City. It now has 2 million members and 2,200 branches across the U.S., said Trovon Williams, senior vice president of marketing and communications for the national organization.

CAPE MAY POINT — A borough man arrested last month was charged with attempted murder and other offenses following a fight with a woman, Cape M…

Opening a restaurant at the Jersey Shore takes family, gallons of paint and local scallops

Messick, 40, is a longtime chef in this Jersey Shore resort town known for its grand front porches and fine dining. This year he took a big le…

ATLANTIC CITY — City Council passed a resolution in support of casino workers in their quest for a fair wage, and to "urge casino employers to…

ATLANTIC CITY — The city has accomplished or at least begun most of the projects laid out in a 2.5-hour State of the City speech back in Febru…

Derrick Johnson, NAACP’s National President and CEO, speaks at a press conference for the organization's 113th National Convention in Atlantic…

Audience members fill the atrium of Jim Whelan Boardwalk Hall for a news conference outlining plans for the NAACP convention this summer in Atlantic City.