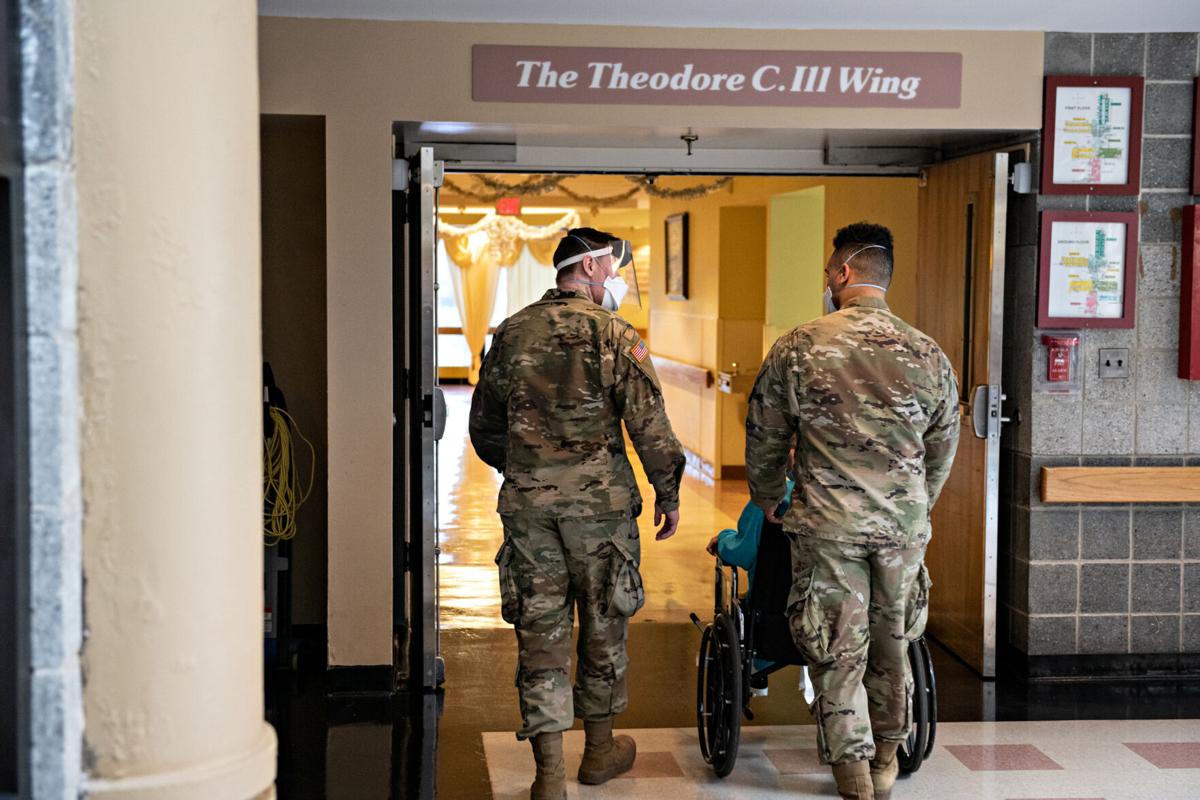 National Guard members are currently backing up staff at Meadowview Nursing and Rehabilitation Center in Northfield. 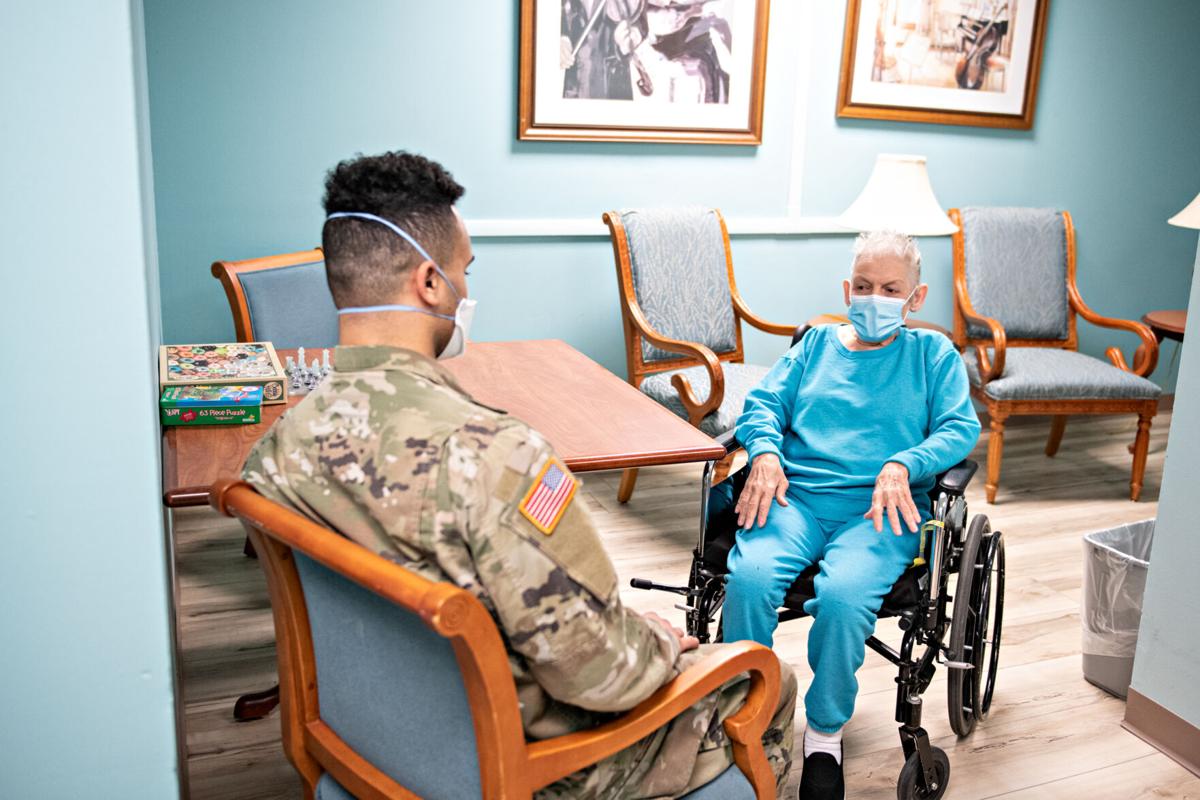 National Guard Specialist Tyler Weber, left, of Ventnor, talks with Meadowview resident Linda Williams, of Millville, who has been at the home for three months as she undergoes physical therapy.

NORTHFIELD — Unlike the usual white and blue nursing gowns traditionally seen throughout the corridors of the Meadowview Nursing and Rehabilitation Center, the halls this week were filled with men and women wearing camouflage.

Training takes up to five weeks, Meadowview Nursing Director Stacie Bates said, but troop members like Sgt. 1st Class Robert Coyle learned most of the job in about two days.

Despite the demands of the assignment, Meadowview feels like a second home for Coyle.

“I’m in the veterans wing, so it’s great to hear their stories,” said Coyle, of Medford, Burlington County.

In addition to Meadowview, guard members are at two other local facilities — Crest Haven Nursing and Rehabilitation Center, in Middle Township, and Lincoln Specialty Care Center, in Vineland. The area facilities are among 13 currently serving as the temporary homes for about 150 troops, Major Agneta Murnan, public affairs officer for the New Jersey Department of Military and Veterans Affairs, said Wednesday.

About 625 troops overall are on active assignments through Joint Task Force COVID-Guardian, an initiative by the National Guard to assist in the fight against the virus. Besides serving in long-term care facilities, troops are supporting veterans homes and public vaccination sites, Murnan said.

At Meadowview, eight have been at the Dolphin Avenue facility in Northfield since Monday, arriving to help stressed staff left shorthanded by a nearly six-week-long COVID-19 outbreak, with the omicron variant behind the unprecedented caseloads.

The personnel available has changed, but the quality of care hasn’t.

“We’ve been pretty challenged in our staffing,” Bates said, “and we’re so thankful for the National Guard to come in and help us.”

Unfortunately, Bates said, the outbreak has spread to residents. Thankfully, the vaccines have kept cases mild.

Nearly 90% of residents and staff members are fully vaccinated, including a booster shot. Anyone eligible for the booster has gotten it through a monthly clinic Meadowview runs, Bates said.

In addition to the National Guard, other outside agencies have been called to Meadowview to replace staff members out with the coronavirus. Other staff have been asked to work overtime to make sure their residents are covered, Bates said.

Despite the stressful situation, the workers and troops are still pulling through, smiling behind their masks while wheeling their residents around the home and delivering them food.

The state Health Department’s Office of Long-Term Care Resiliency coordinates with the facilities on their staffing situation. If necessary, the troops may stay longer.

The National Guard members are tasked with standing in place of the usual caregivers, whose daily tasks include bathing, performing physical therapy, preparing meals and helping them get around. They’re assigned to each location based on COVID-19 trends in the state’s facilities. If too many staff are out sick, they may be called to help.

Besides personal care, moral support is, of course, a plus.

Atlantic City among lowest in state in many social health categories, but work being done to improve

ATLANTIC CITY — Nancy Katz lives in the resort, which has been called a food desert for the …

Many, like Linda Williams, who is originally from Millville, love having the Guard care for her and her friends, some of whom she hasn’t seen since the outbreak forced Meadowview to suspend resident gatherings.

Williams hasn’t been without caregivers since the National Guard arrived, she said.

“Whenever we need them, they’re there Johnny on the spot,” Williams said.

Williams has called Meadowview her home for three months, getting physical therapy to help her walk again. The facility’s liveliness has changed since COVID-19 began spreading among the staff. Communal games and dining have stopped. She still has some fun since Meadowview is doing one-on-one activities.

“Things change on a daily basis,” she said. “You never know what’s going to happen.”

She and others are often left in their rooms to keep them safe, she said. Despite the stress the pandemic has caused her, she said her faith has kept her going.

“God helps me a lot,” she said. “I just think that if you try your best to have a good day, he’ll help you out.”

See video of the National Guard in action at Meadowview at PressofAC.com.

Shipments of three approved COVID-19 antiviral medications have arrived in South Jersey, but supplies are lagging.

With a shortage of staff, members of the National Guard are helping out at Meadowview Nursing and Rehabilitation Center in Northfield.

National Guard members are currently backing up staff at Meadowview Nursing and Rehabilitation Center in Northfield.

National Guard Specialist Tyler Weber, left, of Ventnor, talks with Meadowview resident Linda Williams, of Millville, who has been at the home for three months as she undergoes physical therapy.