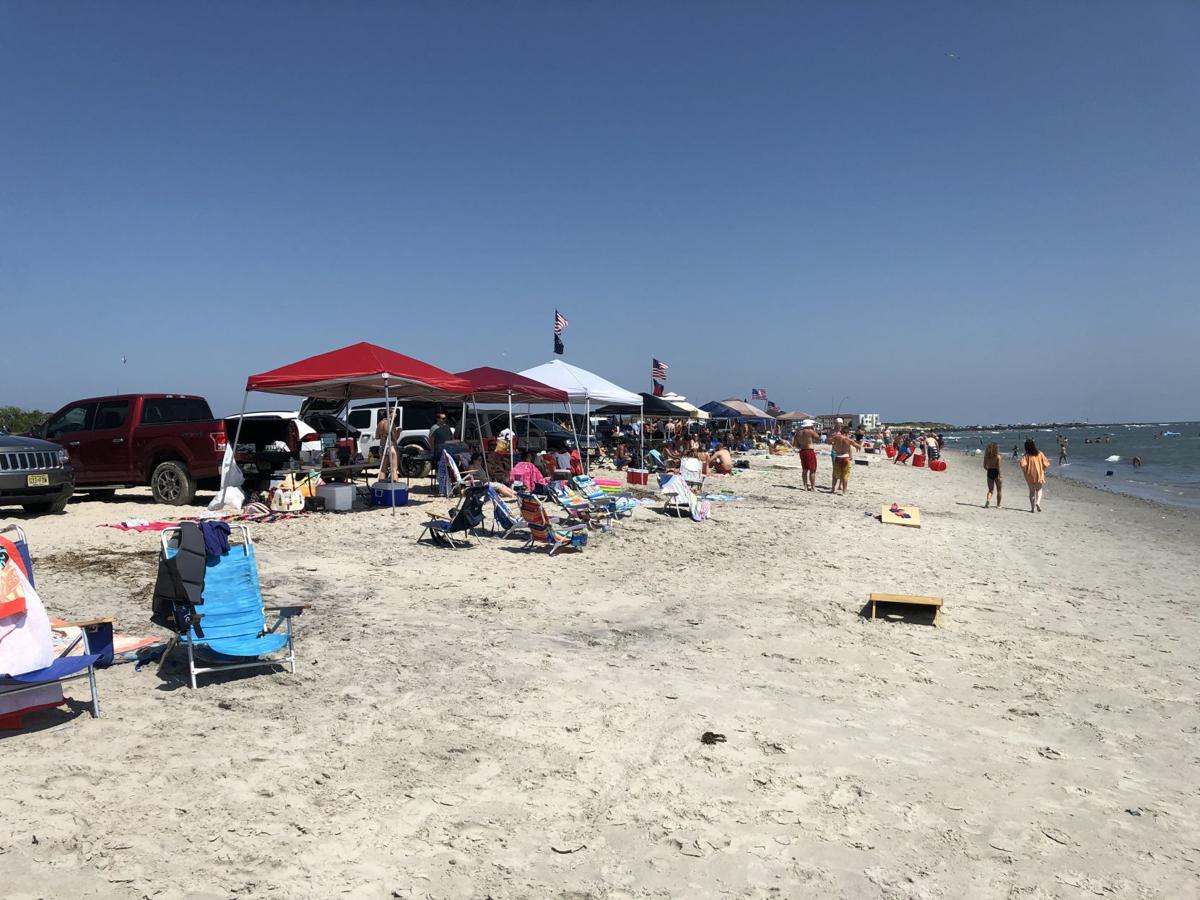 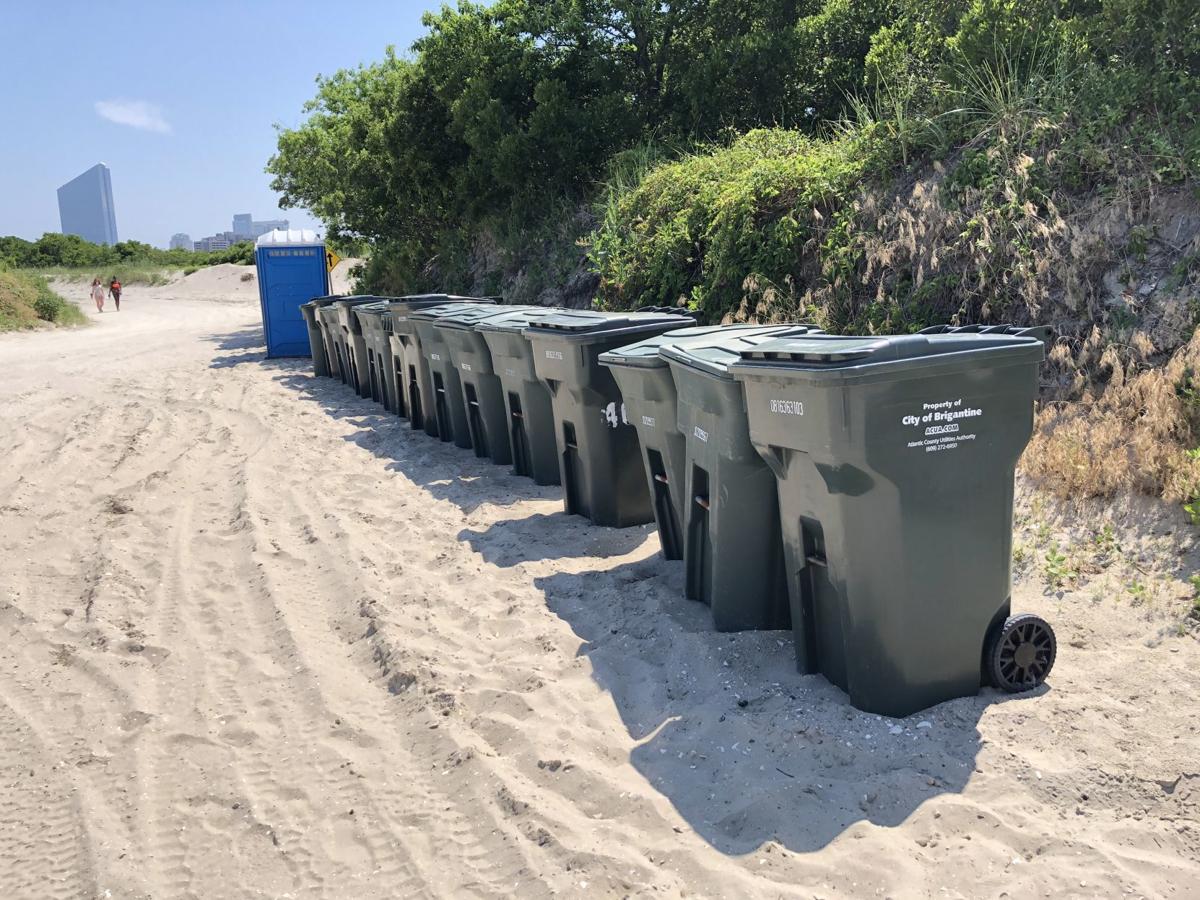 More than a dozen trash cans were placed at the Cove’s exit. 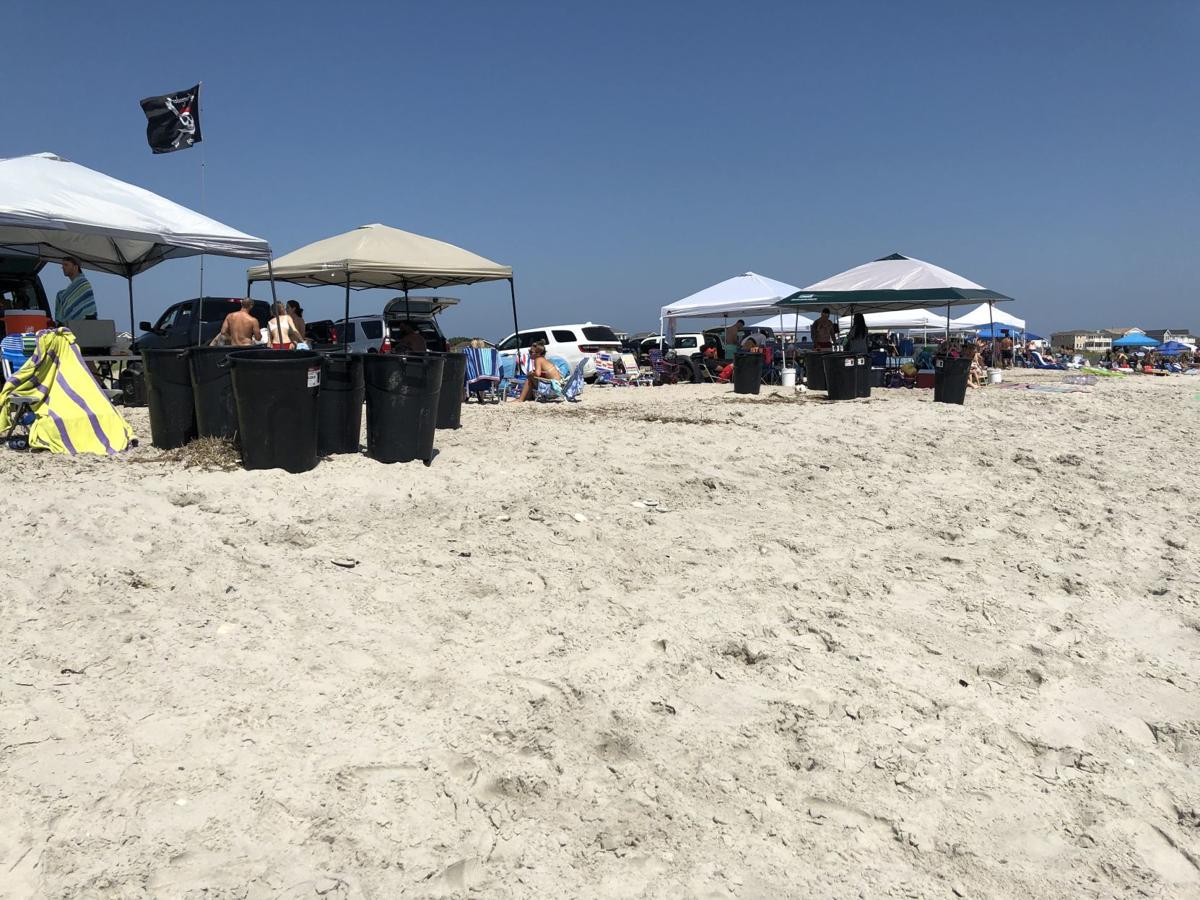 More trash cans were placed along the shore to make sure everyone was a reasonable walking distance away from the nearest one. 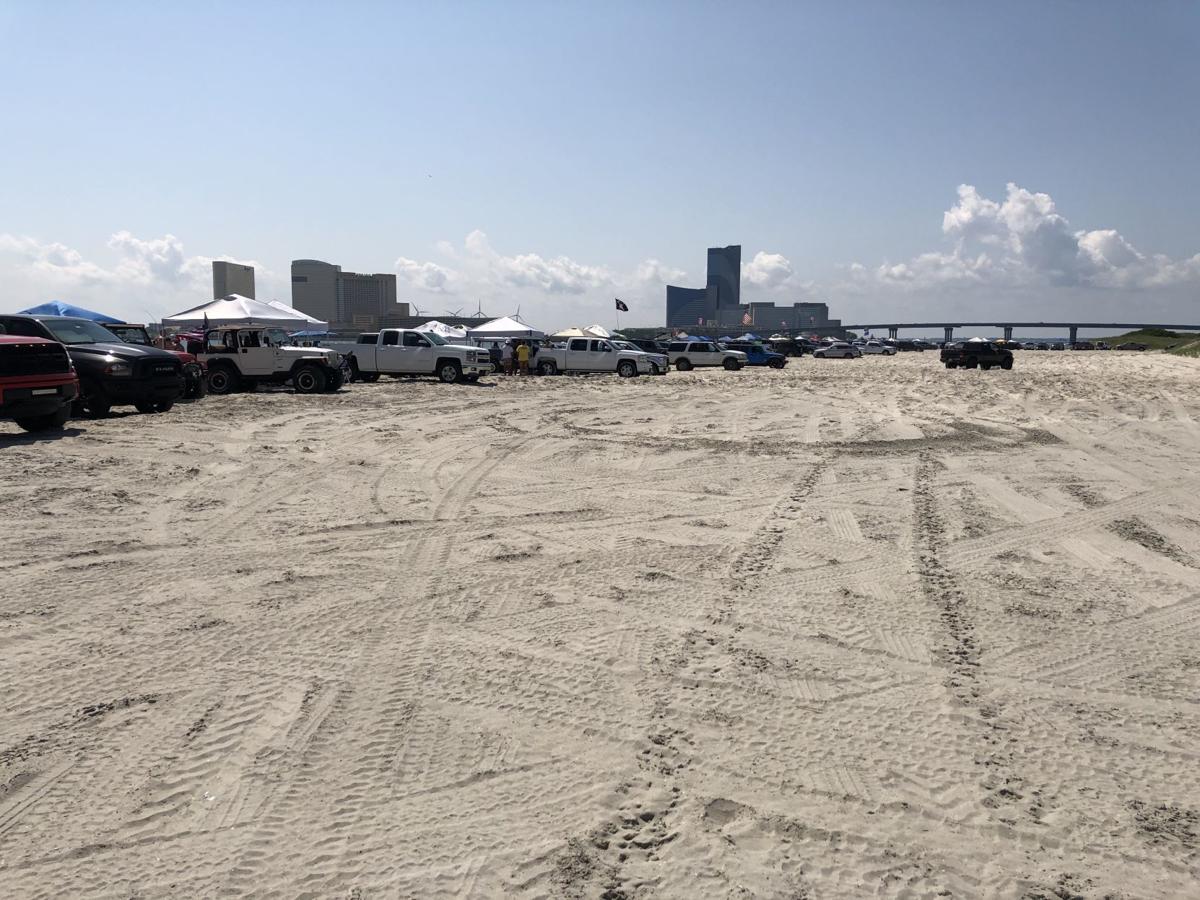 Despite the absence of a fireworks display this year, the Cove still saw several hundred cars coming and going on the beach.

BRIGANTINE — Regulars at the Cove saw a marked improvement compared to the state of the beach a year ago.

After numerous complaints of excess litter, noise and partying in 2019, the city made a concerted effort to begin distancing the beach from that reputation.

This included adding more trash cans across the popular inlet strand and a greater police presence.

The ratio between the party crowd and the family crowd also has begun to favor the latter again, 29-year-old Mark Holman said.

“I know last year there was a large crowd of people who were coming through,” Holman said, “and you could definitely tell the age limit of the crowd and how much it really affected the amount of the pollution and littering that happened and the amount of respect for the actual area.”

ATLANTIC CITY — Mayor Marty Small, Sr. does not want to shut down a popular gathering area a…

Beach badge checkers at the entrance to the Cove regularly carry trash bags on their waistbands.

In previous years, however, they would only give them to visitors who asked for them. This year, it became part of their routine to take initiative and ask visitors whether they needed one.

Holman, who has been coming to the Cove for three years now, said he noticed a lot more people cleaning up their own areas.

The Cove is unique in the sense that it allows for vehicles with permits to be driven right on the edge of the shore. Boats and other personal watercraft can be anchored on the shore, as well.

With its popularity increasing over time, it became known to residents and regulars for its party atmosphere and litter.

A Fourth of July video last year showed the full extent of this reputation. And on July 6, 2019, a checker found a note with a bomb threat at their stand. At the time, Mayor Andy Simpson suggested it may have just been someone upset at not getting a spot on the beach.

Brigantine Deputy Mayor Vince Sera said the effort to improve the Cove situation has been in the works for the last several years but sped up last July after the beach made national news for out-of-hand partying.

“(Mayor Andy Simpson) drove to the Cove last year and talked to everyone about what needs to be done and his expectations, and I think that made a big impact,” Sera said. “He went down there on the fifth and sixth(of July) and then the following weekend to make sure he had personal conversations with every family that was there.”

Saturday looked like a regular day at the Cove. More than 380 cars were on the beach, and 350 cars were parked at the inlet.

More than a dozen trash cans were placed at the beach’s exit, and a larger trash bin was placed on Seaside Road near the jetty.

Cans also were placed along the shore, and most people appeared to be within 100 feet of one.

Atlantic City Public Works also sent two trucks to the area every half hour to clean up.

Sera said the Public Works Department bought Gators, which are golf-cart sized vehicles that can be driven on the beach to help clear trash throughout the day.

“That really helped because they were staying ahead of the trash collection instead of waiting to get it all afterward,” Sera said.

They also changed a local ordinance to allow the police to check individuals’ coolers, added a larger police presence and moved some of those officers to the Cove’s entrance to dissuade would-be rule breakers.

Alcohol isn’t allowed on the beach and with the change, visitors were less likely to attempt to sneak it through.

“Last year they were running onto the beach with 30-packs and this year they’re not because they knew there’d be consequences,” Sera said.

Holman said last year was simply a wake-up call for many beachgoers.

“(Brigantine) made a conscious effort to minimize the amount of people on the beach this year,” he said, “but I think the people who came on this year also (said to themselves), ‘Hey, we’re going to be better about being more respectful to the area.’ There was a very local idea about it.”

“I think it’s a huge difference and a great positive step forward,” he said. “Public works and our police and fire departments worked really well together to keep it clean and to keep it safe. The people who came down really made an effort to do the right thing. I think this is one of the best Fourth of July weekends we’ve ever had.”

Nobody goes there anymore, it’s too crowded. This popular saying that captures the unfortunate fate of many successful places was beginning to…

MARGATE — The third annual Margate Lifeguard Association Labor Day beach cleanup capped a season that saw more litter on the sand than in years past.

Atlantic County officials on Friday announced an additional 24 positive cases of COVID-19, as well as another death.

BRIGANTINE — City Council voted unanimously Wednesday night to adopt changes that will allow for stricter enforcement at the Cove beach.

More than a dozen trash cans were placed at the Cove’s exit.

More trash cans were placed along the shore to make sure everyone was a reasonable walking distance away from the nearest one.

Despite the absence of a fireworks display this year, the Cove still saw several hundred cars coming and going on the beach.