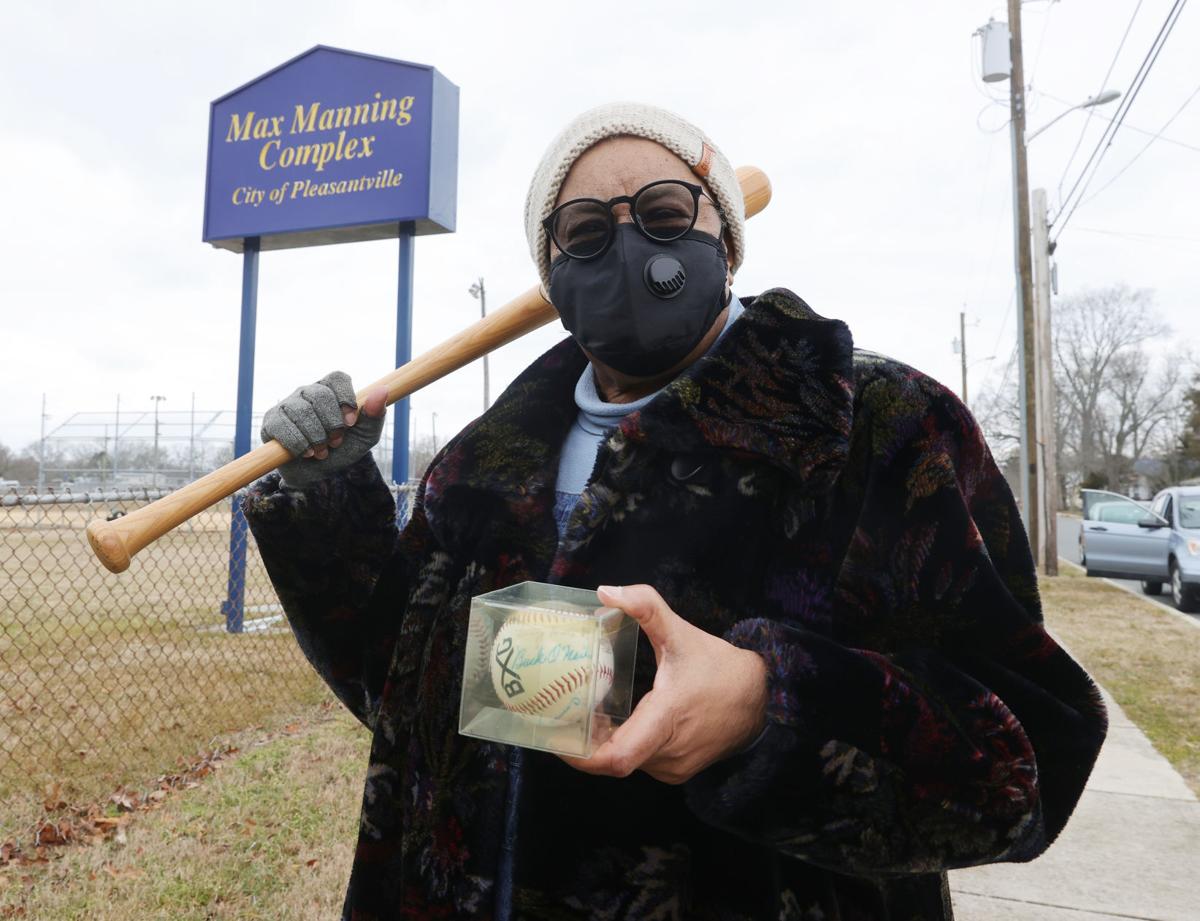 Belinda Manning, daughter of the late Negro League great Max Manning, stands next to the park named after her father in Pleasantville last month. 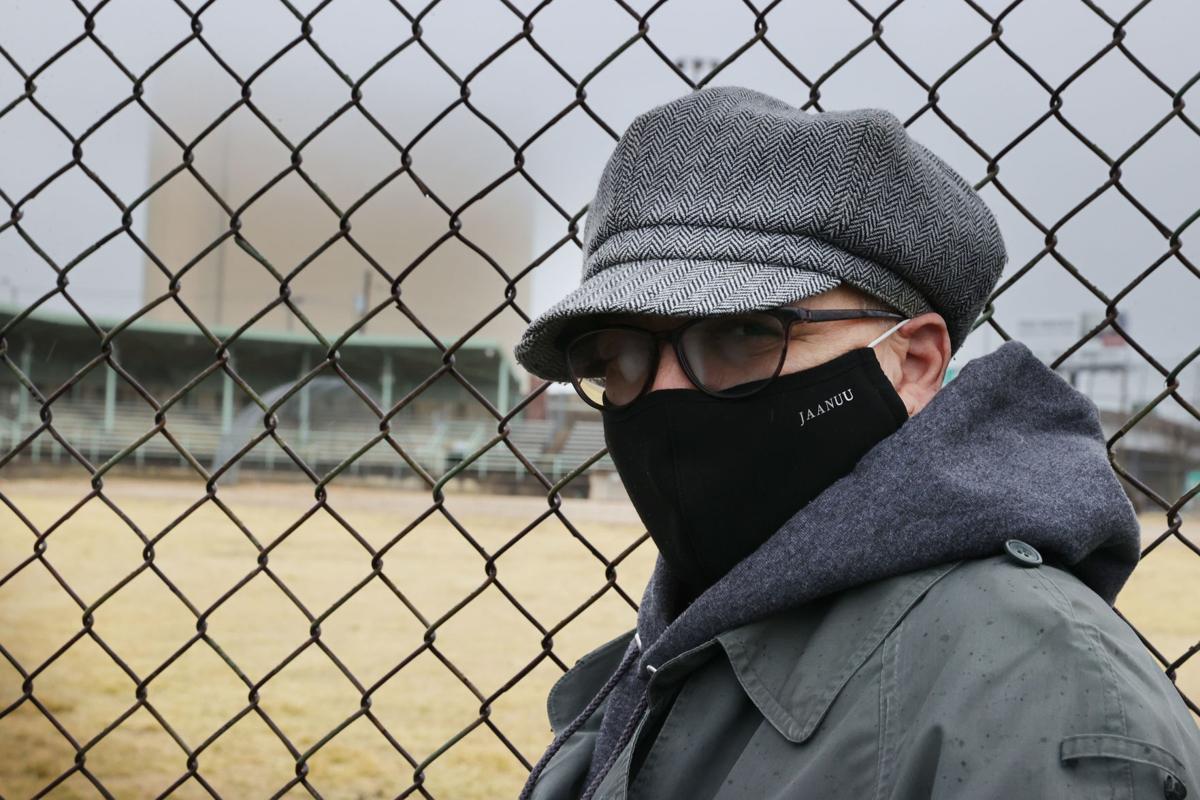 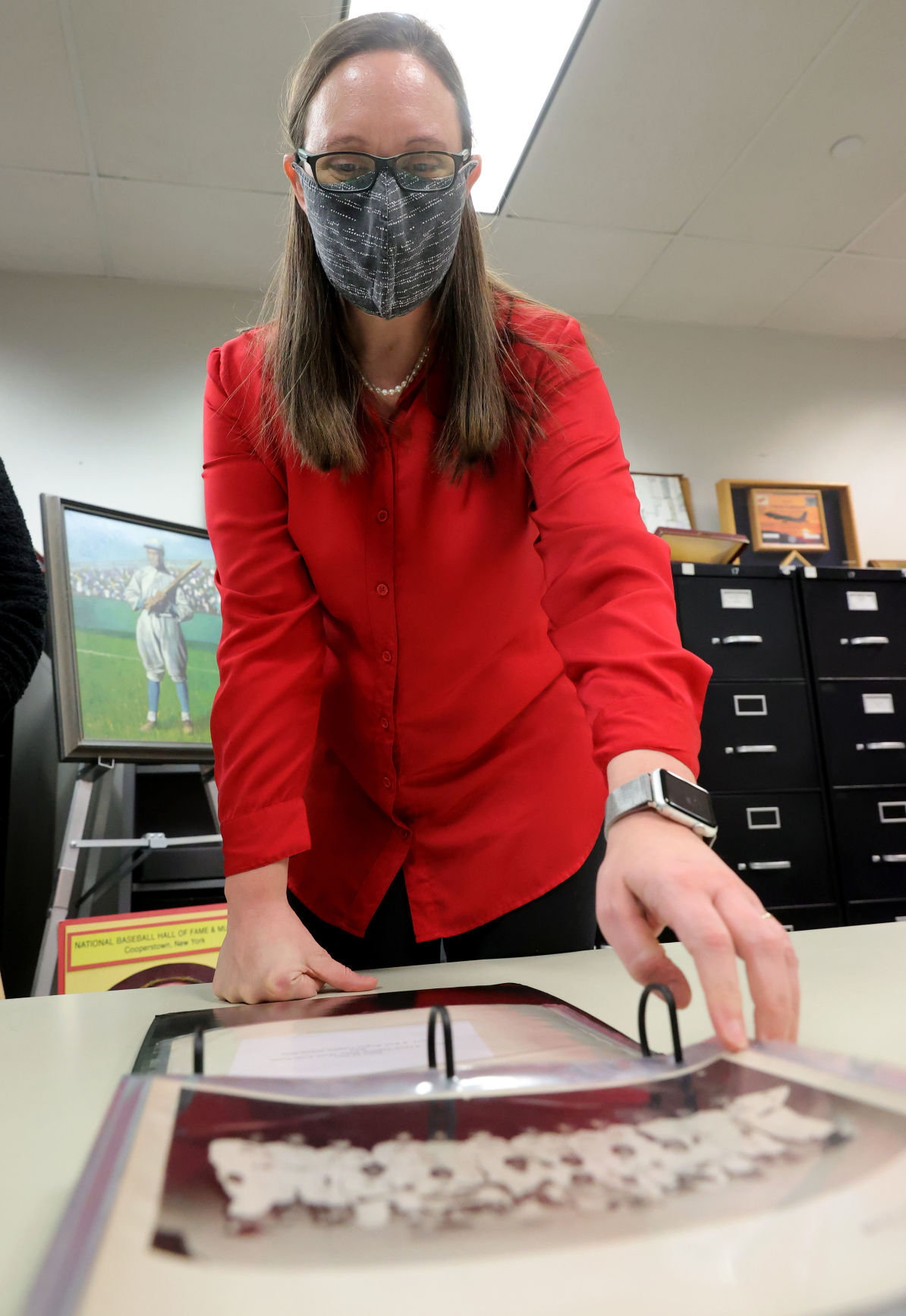 Heather Perez, special collection librarian at Stockton University, shows some of the Negro League memorabilia the school has in its collection. 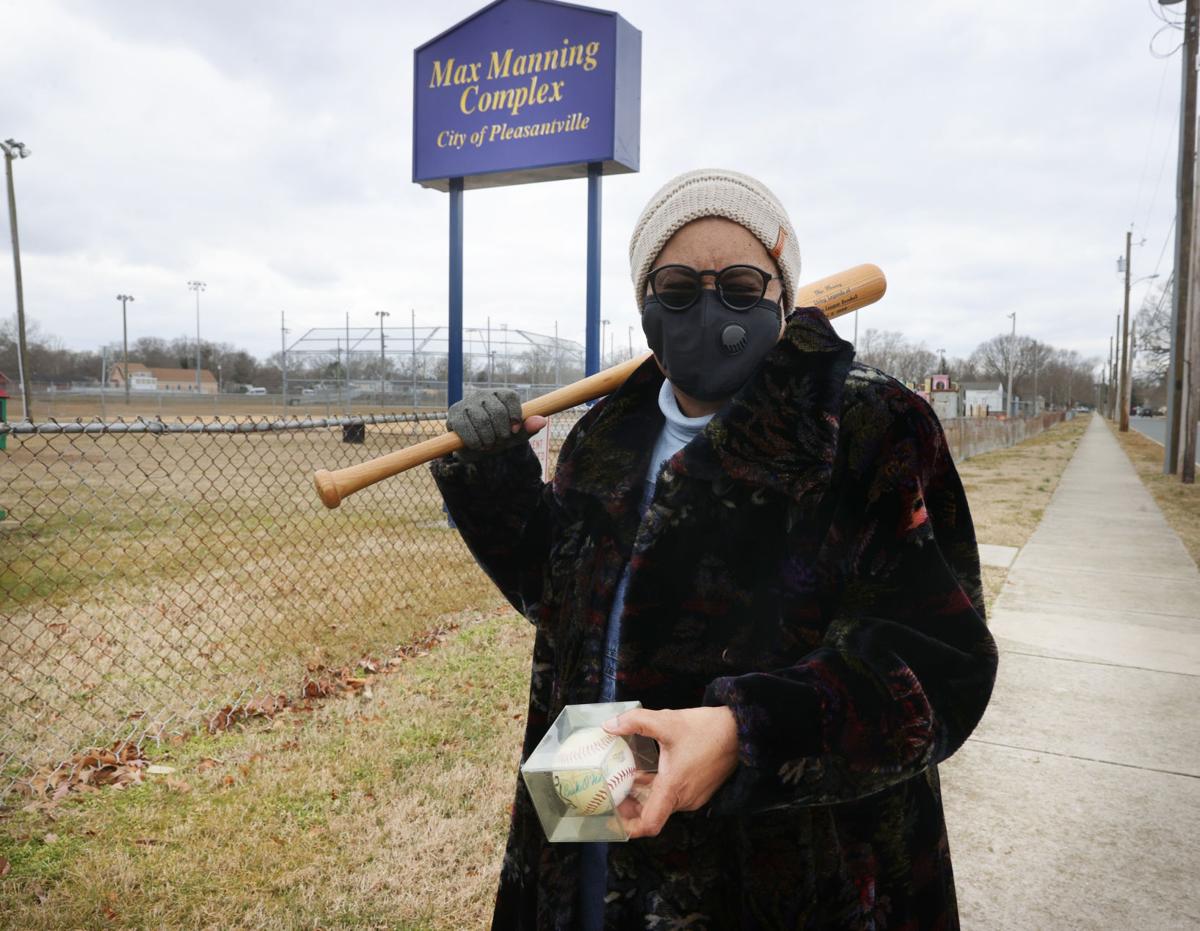 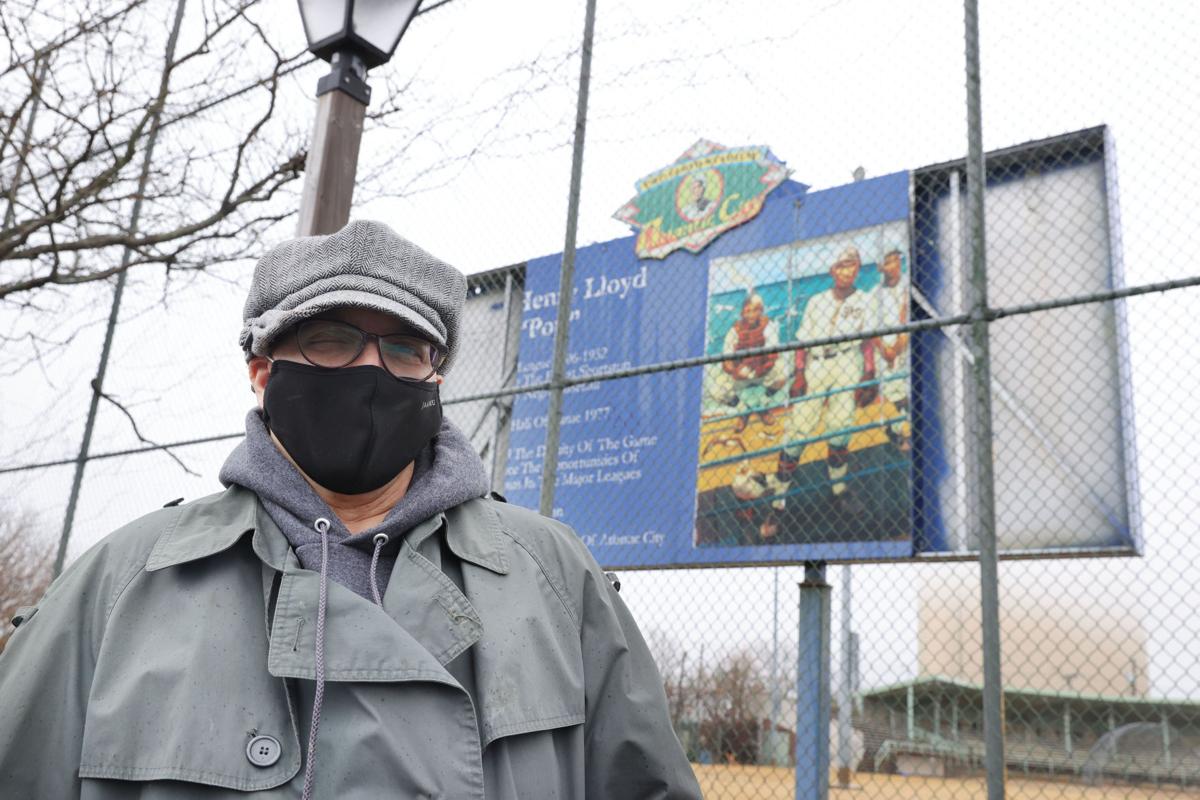 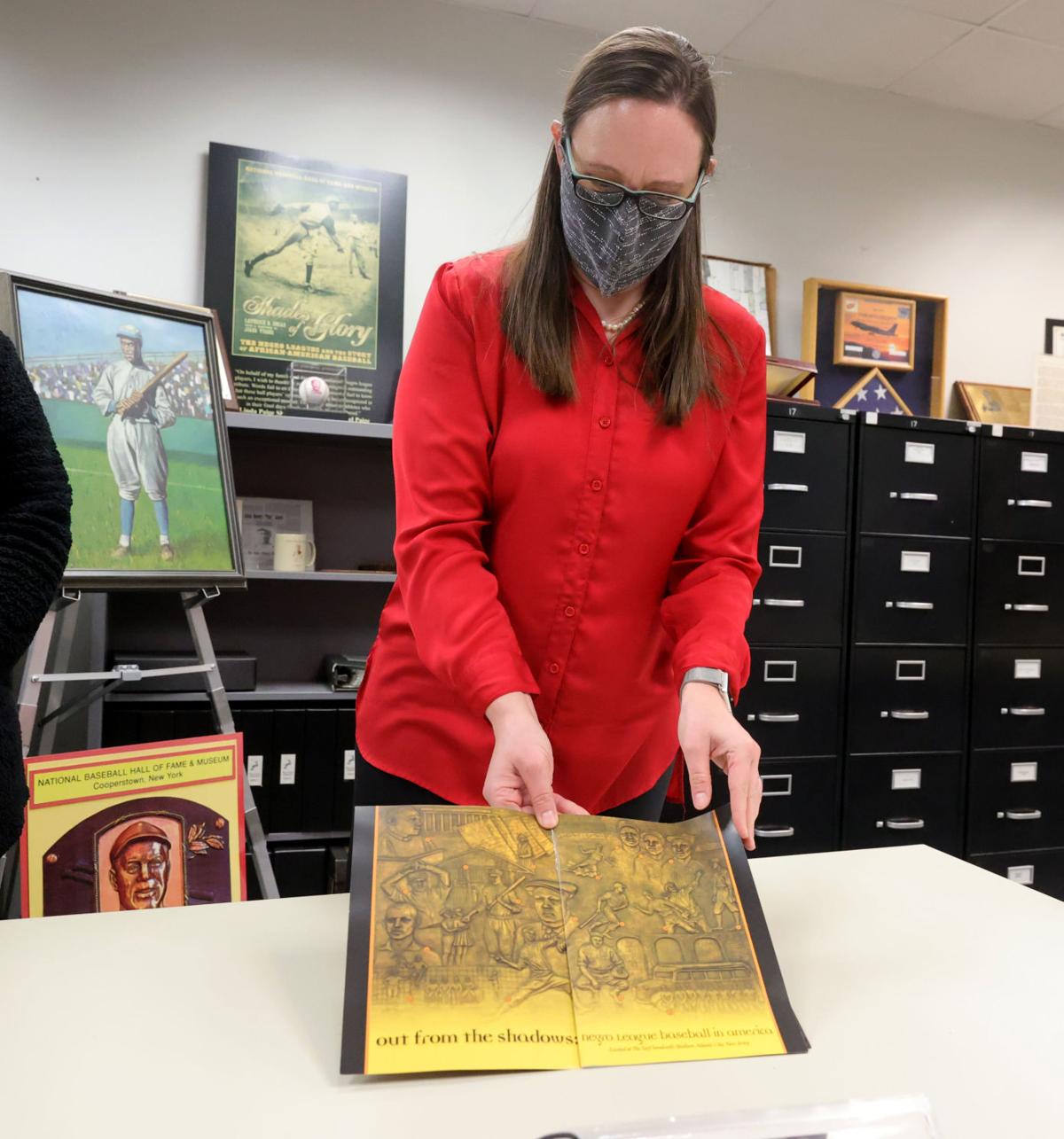 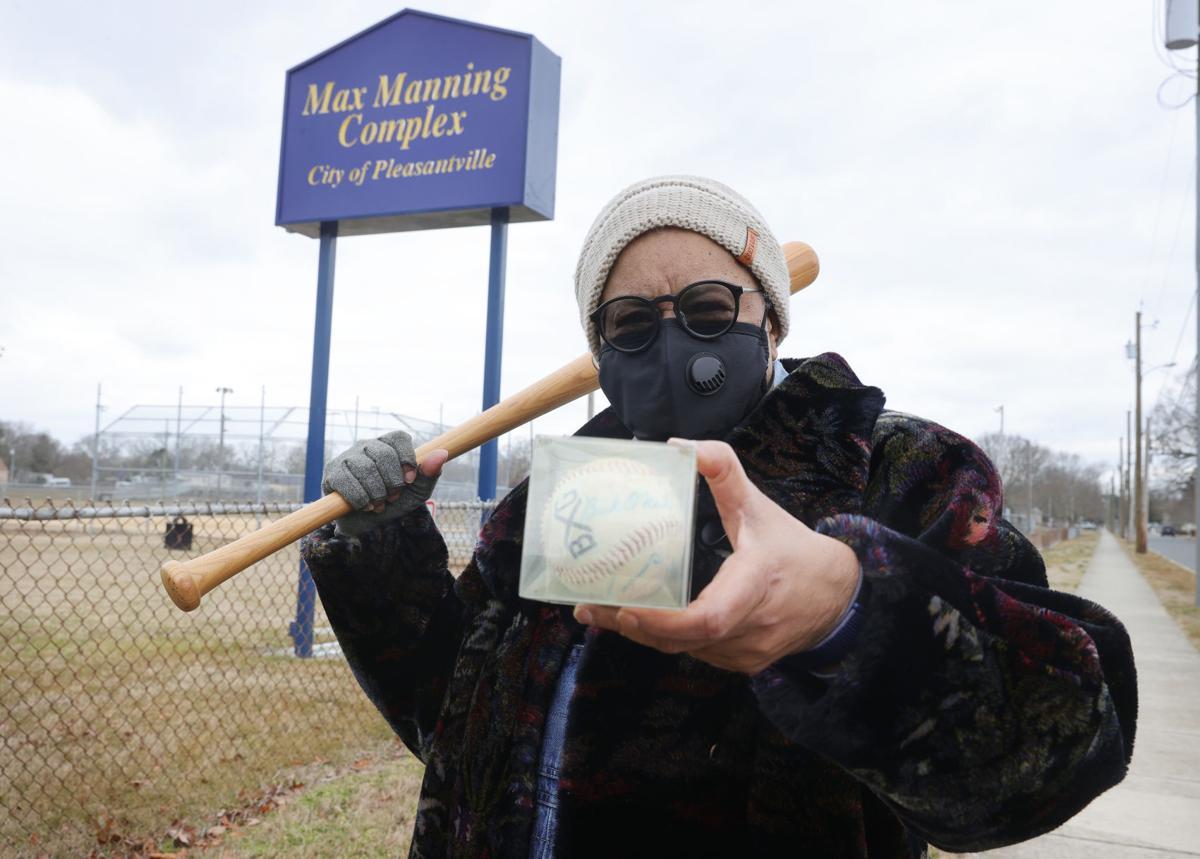 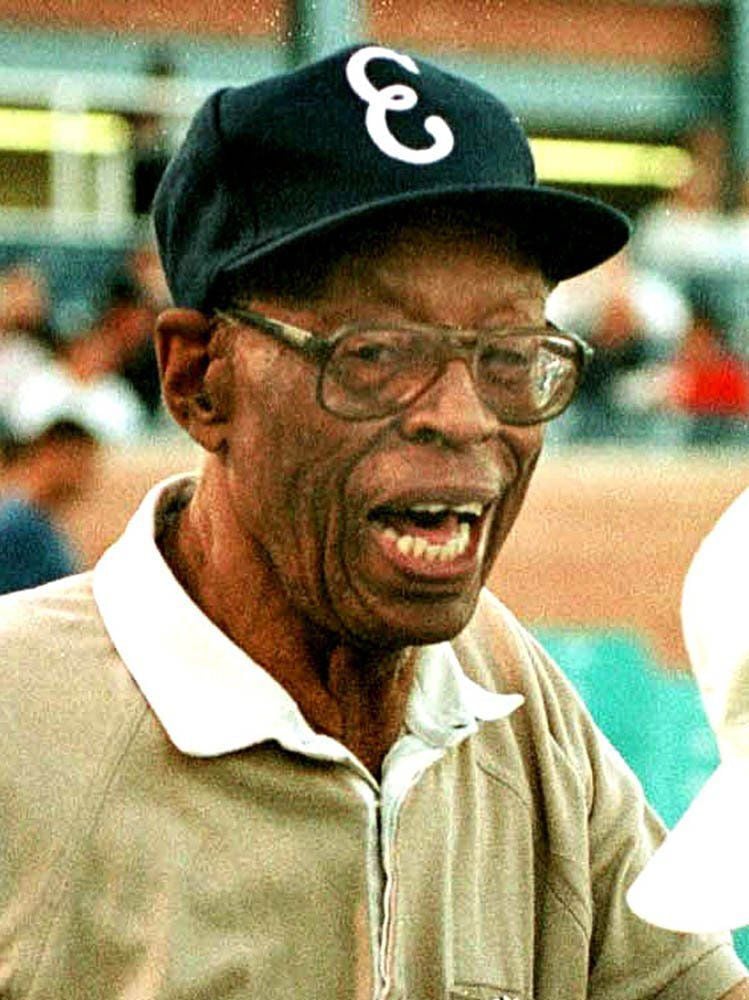 Former Negro Leagues pitcher Max Manning, shown in Atlantic City in this 1998 photo. A 6-foot-4-inch right-hander with a sidearm delivery, Manning was a high school standout who played for the Johnson Stars in Atlantic City after high school. In 1937, he was contacted by the Detroit Tigers for a tryout, but the offer was withdrawn when the team found out he was black, according to “The Biographical Encyclopedia of the Negro Baseball Leagues.” The Max Manning Sports Center is located on Park Avenue in Pleasantville.

During his lifetime, the one-time great Negro Leagues pitcher Max Manning didn't care whether he received recognition for his accomplishments on the baseball field, his daughter Belinda Manning said.

Manning, who died in 2003 and lived in Pleasantville, was a member of the 1946 Negro National League Newark Eagles. He pitched in the ensuing World Series against the American League Kansas City Monarchs, helping his team defeat the favored Monarchs.

"Recognition isn't what he did. In some ways, he did not want attention drawn to him about anything," Belinda Manning said.

During the past 50 years, there have been rising and falling waves of attention given to the fact that Atlantic City housed the first major Black baseball team, the Bacharach Giants, and that Negro League baseball was played in the city.

Besides the Atlantic City High School baseball team, there is no organized baseball league currently in Atlantic City. In 1975, 27% of all Major Leaguers were Black. That figure was down to 7.8% of the opening day rosters last year, according to an analysis by USA Sports.

Despite these factors, interest in Negro Leagues seems to be back on the upswing in South Jersey and nationwide. In December, Major League Baseball officially elevated the Negro Leagues to "Major League" status.

A mural of Max Manning pitching in his Negro League uniform was finished in November above the parking lot of Jo-Jo Italian Grille restaurant in Pleasantville.

Lloyd, the greatest Negro League player in Atlantic City history, joined the Bacharach Giants during the 1920s. He became a resident of Atlantic City in 1931. For many years, he managed the semi-pro Farley Stars, who played at Pop Lloyd Stadium. He also served as Little League Commissioner. He died on March 19, 1964, and was elected into the Baseball Hall of Fame in 1977.

Pop Lloyd Stadium, located at Huron and Indiana avenues in Atlantic City, was originally dedicated to Lloyd on Oct. 2, 1949.

Pop Lloyd Stadium is a national treasure and the oldest and most public commemoration of Black baseball in the country, said Michael Everett, a Linwood resident, who is the director of the Pop Lloyd Committee.

After Lloyd died, the stadium fell into disrepair for the first time in the late 1970s and 1980s, a victim of a lack of interest in the Negro Leagues, neglect and a shortage of funds.

The first wave of attention swung back to the Negro Leagues and its South Jersey history came during the 1990s.

A nonprofit committee was formed with multiple missions. The goals were to renovate Pop Lloyd Stadium and to preserve and amplify the historical legacy of Lloyd and all those who played Negro League baseball and the culture in which it was played. In its early years, the committee also decided to foster excellence, sportsmanship and service to youth.

With the help of Max Manning, the restoration committee, which later adopted the name the Pop Lloyd Committee, held fundraisers and raised more than $450,000 from 1991 to 1994. Major funding was secured from The Grand and Bally's Park Place casino hotels in addition to the Atlantic City government.

In 1993, one year before the ceremony for the restored Pop Lloyd Stadium, Max Manning, who later became a role model for the city's children after his ball-playing days, was honored by the city by having the Park Avenue recreation field named after him.

Shermaine Gunter-Gary was Atlantic City's director of health and human services at the time and also a member of the Pop Lloyd Committee. During the 1990s, there were three Little Leagues, one Babe Ruth team and one men's league that all made use of the renovated stadium, Gunter-Gary said.

For 20 years, from 1992 to 2012, the committee also held "Pop Lloyd Weekend" in the fall, which served as a reunion for Negro League players.

Among the people who came to town for these weekends were Willie Mays, Larry Doby and Monte Irvin, who all played in the Negro Leagues and the Major Leagues and are members of the Baseball Hall of Fame.

The committee also started the Pop Lloyd awards that were given to Atlantic City- area students, who were honored for academic achievement, community commitment and exemplary character.

As time passed by and most living Negro League players died, the interest in the Negro Leagues started to decline again.

Repairs also need to be made at Surf Stadium on North Albany Avenue, Atlantic City, but Small wants to get a minor league team to use the facility and possibly turn the facility into a multi-purpose stadium down the line, Coursey said.

Besides the Atlantic City Free Public Library and the African American Heritage Museum of Southern New Jersey, most of the South Jersey Negro League memorabilia are at Stockton University in Galloway Township.

Heather Perez, the special collections librarian, will be overseeing intern Haley Gaskill, a senior from Voorhees, Camden County, as she organizes the Negro Leagues materials and add to the digital collection that people worldwide would be able to access.

Everett may have been more interested in baseball than most because he fancied himself a pitcher in his preteen formative years. Everett worked with teenagers for 44 years at Atlantic City High School and with the champions of youth program.

Everett, 69, has had an interest in baseball and history as the president of the Linwood Historical Society.

A Pop Lloyd Weekend was planned for last year for the centennial celebration of the Negro Leagues, but the COVID-19 pandemic kept it from happening, Everett said. Everett would like for Pop Lloyd Weekend to return this October.

"To me, they were the early pioneers in the advancement of civil rights," said Everett, who added they had the values of dignity, pride and perseverance to struggle to overcome adversity to make important history. "They are worthy of celebration and worthy of commemoration. I think it's important."

TRENTON — Gov. Phil Murphy will make a sports-related announcement Monday morning regarding COVID-19-related restrictions on the "Moose and Ma…

Belinda Manning, daughter of the late Negro League great Max Manning, stands next to the park named after her father in Pleasantville last month.

Heather Perez, special collection librarian at Stockton University, shows some of the Negro League memorabilia the school has in its collection.

Former Negro Leagues pitcher Max Manning, shown in Atlantic City in this 1998 photo. A 6-foot-4-inch right-hander with a sidearm delivery, Manning was a high school standout who played for the Johnson Stars in Atlantic City after high school. In 1937, he was contacted by the Detroit Tigers for a tryout, but the offer was withdrawn when the team found out he was black, according to “The Biographical Encyclopedia of the Negro Baseball Leagues.” The Max Manning Sports Center is located on Park Avenue in Pleasantville.