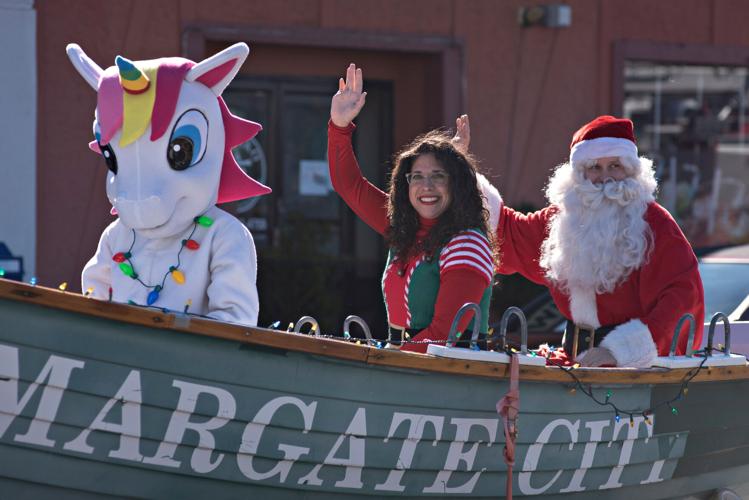 Margate firefighter Dany Loyle rides with Santa Claus in the parade Saturday. Both elf and Santa are ASL trained. 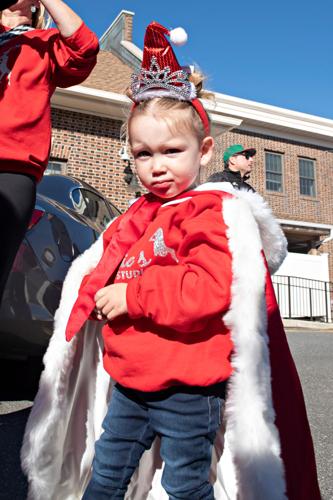 Tess Acampora, 2, of Somers Point, got dressed up for the parade. 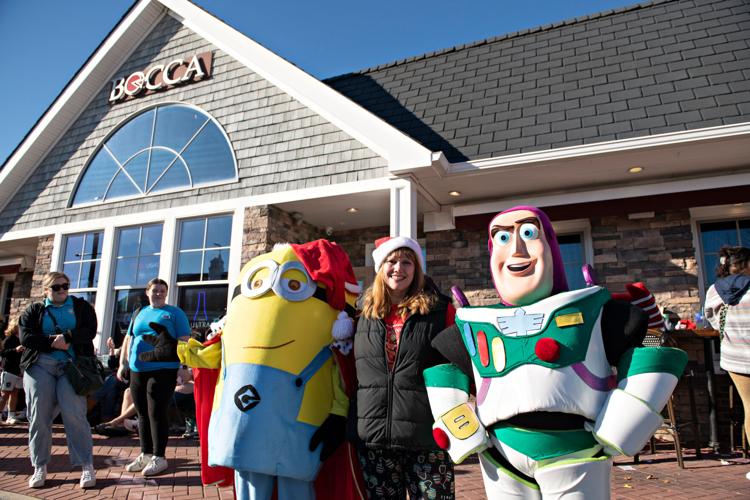 MARGATE — While families lined Ventnor Avenue on Saturday to see Santa Claus, Buzz Lightyear and Minions at the Christmas parade, others decided to support local businesses during the Margate Spectacular Shop Small Weekend.

Shop Small Weekend is put on by the Margate Business Association to bring the community together while exposing them to area businesses.

"Children get to enjoy the spirit of the holiday, while we expose people to different shops and encourage them to shop local," said Anna Maria Porter, executive director of the Business Association.

Porter said small businesses are the lifeblood of the community, so the Business Association used every catalyst it could to encourage shopping local, such as Saturday's parade.

The parade started at the fire station at Washington Avenue and ended at Bocca Coal Fired Bistro at Essex Avenue, highlighting Margate's business and restaurant district along the way. Miss New Jersey 2022 Augustina Mallous, Leslie's Dance Studio, Playground Plus, the U.S. Naval Sea Cadet Corps and others participated in the parade.

Saturday's event also included karaoke, a DJ and live piano music at Bocca, where kids could meet a Santa fluent in ASL, his elves, a unicorn and others for pictures.

Inflation may affecting Americans as the holiday season kicks off, but it didn’t stop Black …

Maggie Drew-Crumb said she and her husband, John, don't do a lot of holiday shopping, but when they do, they prefer to shop local.

"Growing up in a small town, shopping local ... feels more homey," said Drew-Crumb, who was in town visiting her mother, Jeanmarie Drew. "You support local businesses but also support their Christmas shopping."

Markella Lios, manager of Hot Bagels, her family's business, said the holidays attract more customers during the long Thanksgiving weekend. Combine that with sales on mugs, perks for customers paying with credit cards and mild weather at least for Saturday, and it's a nice time of year for Hot Bagels, despite the ongoing effects of inflation.

"(Inflation) affected our business a lot because it makes it hard for us to get supplies, we have to deal with more vendors and we have to raise our prices," Lios said. A box of gloves that used to cost about $25 now costs $80.

Lios said a lot of their customers have been OK with price increases, since they understood where Hot Bagels was coming from and were used to increases everywhere else.

"People should shop local because local businesses need it," said Lios. "The winters are rough here."

Trees return to the beaches: Cape May County briefs

OCEAN CITY — What began as a temporary way to boost spirits in the dark, pandemic-ridden day…

Lauryn Freedman, the manager of her family's business, Bocca, said they also rely on the support of locals to keep them afloat.

Freedman said the business, which has been around for 10 years, has also been affected by inflation and had to raise prices, since supplies now cost about four times more than they did a year or two ago.

Randi Talley, the owner of Tacocat, said she can feel the holidays playing a part in how business was going, but it wasn't as bad as she thought.

"Prices are so high in stores, why are you going to buy a whole thing of cayenne pepper or ingredients for a meal when I can just buy dinner instead?" said Talley about why she hasn't seen the effects of inflation at her business.

Talley said business around the holidays has been a little down, and was last year as well, which is why they participate in the small business weekend by having gift card specials and putting coupons for free tacos in the scavenger hunt gift boxes that were available Saturday.

"This is the slow time of year. Coupled with inflation, it's painful," Talley said.

Talley said she was very sensitive to the fact that customers keep them in business, which is why she wouldn't raise her prices.

"People are more conservative with their money," Talley said.

Drew-Crumb said she likes shopping local because she finds unique things and started shopping months ago to make things easier on her pocket and stay ahead of the holiday shopping game.

Chocolates from Jagielky's Home Made Candies or a gift card from AvantGirl make great gifts, she said.

We are neither immune, nor always able to control change; when we can, we strive to be better

You’ve been hearing a lot from us about changes in your daily newspaper.

Margate resident Lynne Kaufman said she was being more selective this year with her holiday shopping, since things are more expensive.

"Instead of thinking about buying something cute, I'm trying to spend money on things that will last," Kaufman said.

Kaufman said she participates in Shop Small Weekend every year but didn't know the city was having a holiday parade.

"I'm so happy to be here. The sales here are great. They have unique gifts. It's a great loss if you don't visit the community businesses," she said.

Why Trxie Mattel and George Santos Are Beefing On Twitter

Why Trxie Mattel and George Santos Are Beefing On Twitter

Russia says U.S. tanks in Ukraine will 'burn just like all the others'

Russia says U.S. tanks in Ukraine will 'burn just like all the others'

Margate firefighter Dany Loyle rides with Santa Claus in the parade Saturday. Both elf and Santa are ASL trained.

Tess Acampora, 2, of Somers Point, got dressed up for the parade.