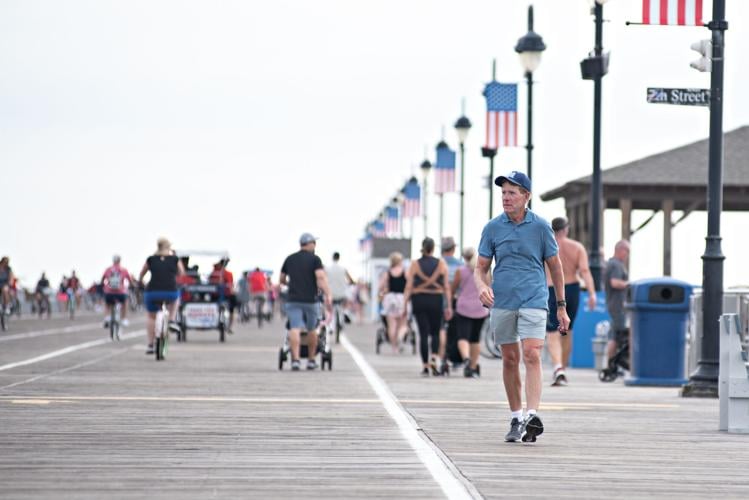 R.C. Staab, right, of Sea Bright and New York City, walks through Ocean City on Tuesday. He is making his way on two feet south from Sandy Hook to Cape May. 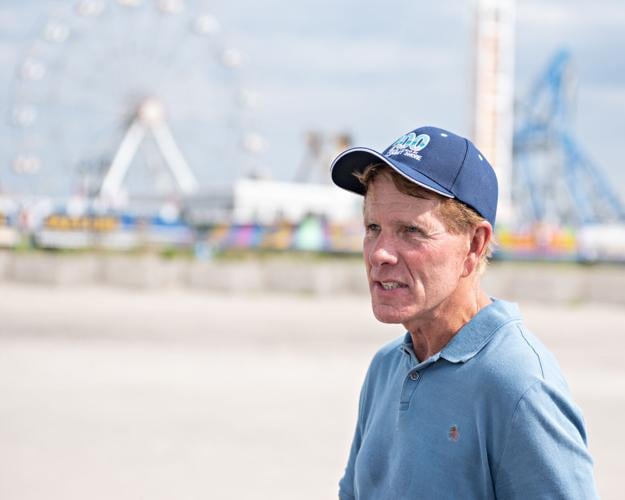 “I post about what my view of that town is from the beach," Staab said of his walks. "It's a better way to experience all of the towns as you walk by because you also understand how often towns connect to each other.”

Walking down the Ocean City Boardwalk on a busy summer morning was a man in a light blue polo shirt and navy blue hat that read, “100 Things to Do at the Jersey Shore.”

He seemed to fit right in with the hordes of people already beginning to form on a Tuesday before 10 a.m.

The man was R.C. Staab, a self-proclaimed Jersey Shore expert and author of 100 Things to Do at the Jersey Shore Before You Die, and he has been garnering attention as of late for endeavoring to walk the entire 139-mile length of the Jersey coastline, north to south.

Staab, 64, grew up in Pittsburgh and still remembers his first trip to the shore at Stone Harbor when he was 9 years old. The idea to walk the entire length of the Jersey Shore came to him while taking a leisurely stroll along the beach in Asbury Park with a couple of friends last fall.

“We only walked like 2 miles, but we went through like four beach towns and I thought, ‘Wouldn’t that be a great way to see the shore?’” Staab said.

A white shark last week journeyed close to the shore off Atlantic City and Ocean City, the m…

Having spent Monday walking all of Brigantine and Absecon Island, Staab began his walk Tuesday morning at the northern tip of Ocean City.

According to him, he can walk at a rate of “5 miles per two hours” without stopping. However, he hasn’t been walking nonstop.

Staab started his journey in April in Sandy Hook, Monmouth County, and has taken a rather practical approach to his journey. Not camping along the way, he has opted to stay in hotels, and uses his phone to order car services at the end of his walks to get back to where he parks his car. He also spends time traveling back and forth to his home in Sea Bright, Monmouth County, for work engagements, but he always picks up where he left off.

Staab travels light, carrying only his cellphone and “a couple bucks a time” to get supplies like water.

“I go on my phone, ‘Where’s the closest Wawa?’" said Staab. “A lot of the Wawas are a block in, and that’s super dependable and has restrooms.”

Staab has been documenting his journey at jerseyshorewalk.com. His posts include tips on parking and beach badge information, as well as tales of lesser-known beaches and rules of the different beach towns regarding surfers and dogs. Mostly, it's his perspective on the walks.

“I post about what my view of that town is from the beach," he said. "It's a better way to experience all of the towns as you walk by because you also understand how often towns connect to each other.”

He anticipates his walk will end in August in Cape May if he isn’t delayed by any weather events. He plans to take the Cape May-Lewes ferry from there to Delaware to visit friends. “But I’m not walking Delaware beaches," said Staab.

“Almost every town I’ve been able to discover something I didn’t know,” Staab said when asked about his main takeaway from the trip so far.

“Brigantine — we had a place there for seven years. I never walked to the northern tip of Brigantine,'' he said. “It just seemed far.”

R.C. Staab talks about his walk along the Jersey Shore in a video at PressofAC.com.

OCEAN CITY — A 66-year-old city man died Tuesday after the car he was a passenger in was struck at the base of the Route 52 causeway.

CAPE MAY COURT HOUSE — In a unanimous vote Tuesday, the Cape May County Board of Commissioners approved a $182 million budget that includes an…

Ocean City bike parade set to roll, but future is uncertain for SOCIA

OCEAN CITY — The Independence Day bike parade through the south end of the island will ride again this year, set to begin 10 a.m. Saturday at …

She was not the only one. Dozens gathered Friday at Oscar E. McClinton Waterfront Park in the Northeast Inlet for a Young Entrepreneurs event …

Miss New Jersey to be crowned tonight in Atlantic City

NORTH CAPE MAY — Saying it’s past time for using COVID-19 as an excuse to restrict services at Motor Vehicle Commission offices, a group of Re…

Unauthorized communication between Russian soldiers, loved ones reveals how ill-equipped military is

Unauthorized communication between Russian soldiers, loved ones reveals how ill-equipped military is

R.C. Staab, right, of Sea Bright and New York City, walks through Ocean City on Tuesday. He is making his way on two feet south from Sandy Hook to Cape May.

“I post about what my view of that town is from the beach," Staab said of his walks. "It's a better way to experience all of the towns as you walk by because you also understand how often towns connect to each other.”