Amid pandemic, flu has virtually disappeared in the US; Pfizer studying 3rd dose to fight variants

ATLANTIC CITY — Total gaming revenue for the city’s nine casinos was up 3% in September compared to last year, ending a six-month streak of decreases because of the economic effects of the coronavirus pandemic.

However, the year-over-year increase is due entirely to internet casino revenue, based on data released Thursday by the state Division of Gaming Enforcement.

Given the state’s COVID-19 travel restrictions and casino capacity limitations, the nearly $291.7 million in total gaming revenue reported by the gambling parlors last month was cause for measured optimism.

“For the sixth month in a row, internet gaming win more than doubled compared to last year. Casino gaming taxes grew more than 16% compared to last September, providing needed funds for programs that aid New Jersey’s senior citizens and disabled residents,” said Casino Control Commission Chairman James Plousis. “These results were promising in the midst of continuing travel advisories that decrease visits from out of state, as well as restrictions on capacity, amenities and entertainment that have made 2020 not reasonably comparable to last year.”

Jane Bokunewicz, coordinator of the Lloyd D. Levenson Institute of Gaming, Hospitality & Tourism at Stockton University, noted that last month was “one of the strongest Septembers for Atlantic City casino operators in recent history,” coming close to the high point set in September 2011 ($294.59 million).

“This is a great result during a pandemic with capacity restrictions and social distancing requirements suppressing brick-and-mortar casino revenues,” she said.

Atlantic City’s nine casinos closed March 16 by order of Gov. Phil Murphy to mitigate the spread of the coronavirus. Murphy permitted the casinos to reopen July 2.

Year-to-date, Atlantic City’s casinos have reported slightly more than $1.8 billion in total gaming revenue, a steep decline from the nearly $2.5 billion through the first nine months of 2019. Casino win — combined revenue from slots and table games — is down 49.7% through the same period.

September was the first month since reopening in July that casino restaurants and bars were permitted to resume indoor service.

“The combination of Labor Day weekend and the return of indoor dining afforded us the opportunity in September to continue the momentum created here at Ocean,” said Terry Glebocki, CEO of Ocean Casino Resort, the only property in the city to report an increase in brick-and-mortar revenue last month. “Our guests have enjoyed dining again at their favorite restaurants within our casino resort, and our year-over-year gaming revenue growth of nearly 27% is indicative of the successes we have achieved.”

Hard Rock also had a good month, with a 12.5% increase in slot win and total gaming revenue, a 230.4% uptick in online gaming and a 61.2% increase in sports wagering revenue.

Caesars Atlantic City (44.9%), Resorts Casino Hotel (6.6%) and Ocean (15.2%) all reported year-over-year increases in table games revenue, a metric largely dependent on who has the better luck, the players or the casino.

The total amount of money wagered on slot machines — a good barometer for visitation to the casinos — was down $240,319, or 13.7%, for the month. Only Ocean and Hard Rock reported monthly increases in the amount wagered at slots, but Ocean gave out a market-leading $6.45 million in free slot play last month, an increase of 85% compared to what the property gave away last September. 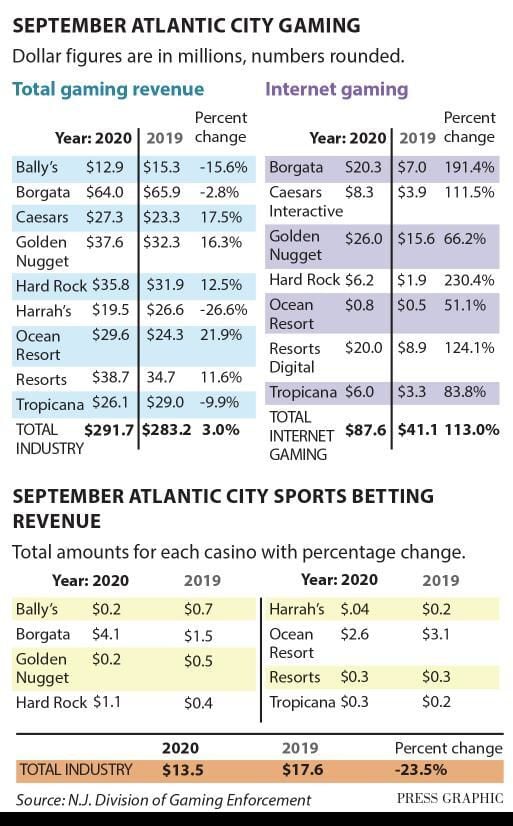 Golden Nugget Atlantic City continued to lead the market in terms of online gaming revenue, accounting for more than $26 million of the entire $87.6 million reported by Atlantic City casinos and their internet partners.

Through the first nine months of 2020, online gambling has generated $685.6 million, up 102.2% from $339 million through the same period in 2019. Some online gaming experts believe a record-setting $950 million in annual online revenue is possible this year.

“Nearly $1 billion in revenue is a staggering figure to think about, and every dollar has been vital in keeping New Jersey’s gaming industry afloat during a difficult year,” said Eric Ramsey, analyst for PlayNJ.com. “The growth in online revenue has begun to flatten after a spring surge, but the importance of online gambling to the overall health of the industry continues to grow.”

The amount wagered on sports in New Jersey — a figure that includes the eight retail sports book in Atlantic City, three racetracks and online/mobile — broke a monthly record, set in August. The $748.6 million wagered on sports statewide was a 68% increase from the total bet in September last year.

“September was a once-in-a-lifetime moment on the sports calendar when all four major U.S. sports were playing meaningful games all at once, which was obviously a boon for sportsbooks,” said Dustin Gouker, lead analyst at PlayNJ.com. “The growth seen over the last two months will likely level off once the sports schedule returns to normal. But it’s clear New Jersey’s sports betting industry is setting a new floor.”

Won Sept. 26 on Pillars of Asgard on BORGATACASINO.COM

Won Sept. 12 on VoltsAndBolts on TROPICANACASINO.COM

ATLANTIC CITY — After a seven-month hiatus because of the coronavirus pandemic, Greyhound Lines Inc. will resume bus service next week to the …

No increased capacity for indoor dining due to spike in COVID-19 cases, Murphy says

As temperatures fall and COVID-19 cases increase, Gov. Phil Murphy said now is not the time to increase capacity for indoor dining.

ATLANTIC CITY — Twin River Worldwide Holdings Inc. may not be a familiar name to some casino players, but the Rhode Island-based company has s…

ATLANTIC CITY — Deb McGinnis has been a cocktail server at Bally’s Atlantic City for nearly 30 years. The 55-year-old from Egg Harbor Township…