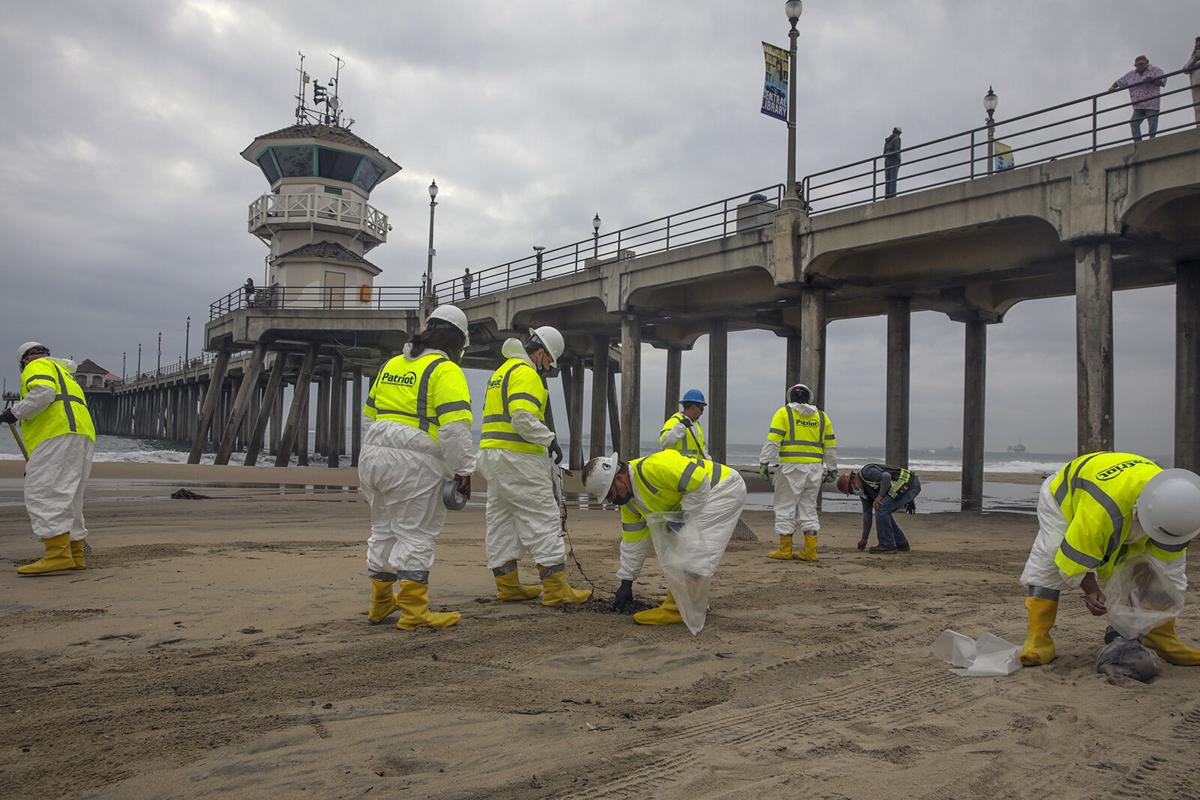 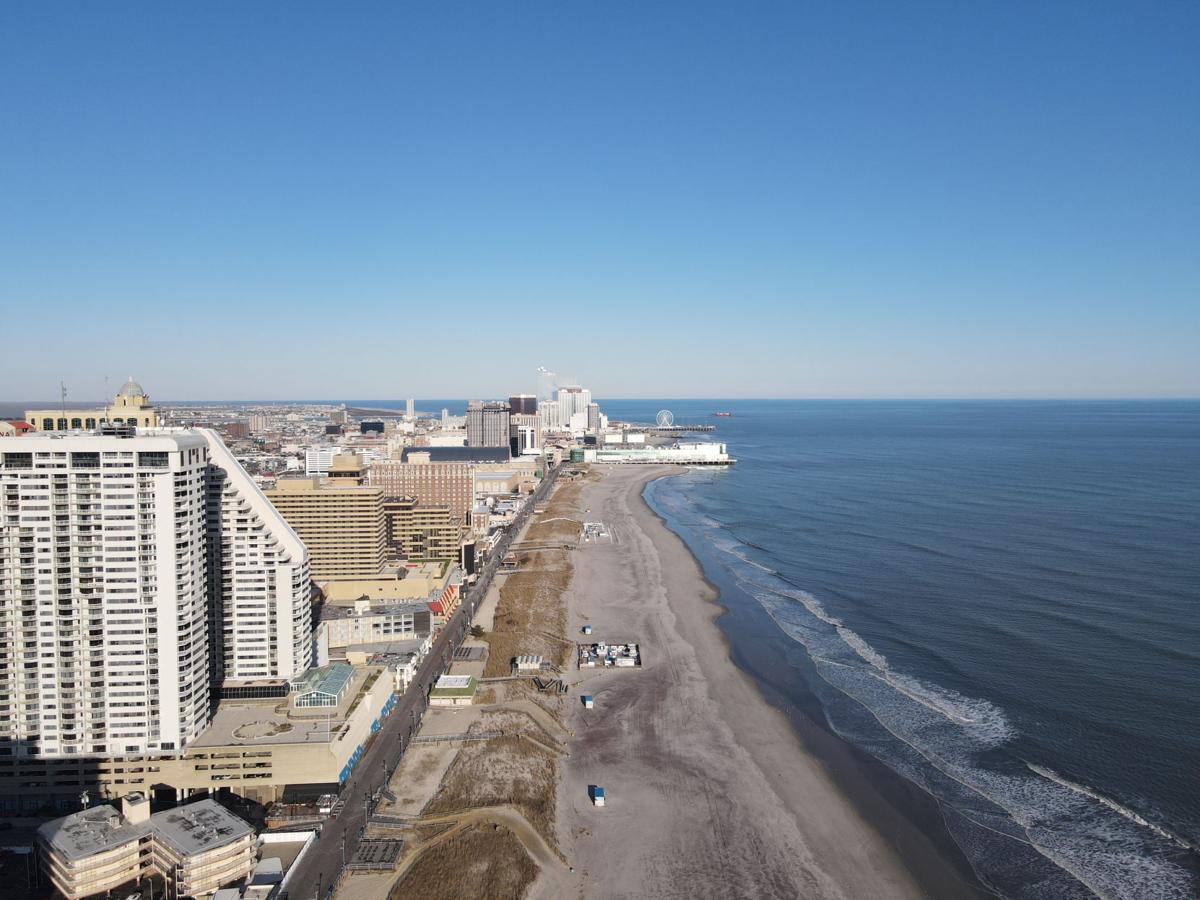 Strolling home from a beach yoga session near Lifeguard Tower 14, not far from the crews working to contain the massive oil spill from an offshore pipe, Julie Green passed a vestige of her city's petroleum-steeped history.

It was a solitary pump jack, encircled by barbed-wire fencing and squeezed incongruously between pricey homes on 14th Street and Pacific Coast Highway. For longtime Huntington Beach residents, the surviving oil wells seem to fade into the background, like the tall palms and the distant freight ships.

The oil industry's presence on that landscape was once overpowering. Huntington Beach used to boast the nickname Oil City, and famous 1920s photos depict beachgoers in the shadow of towering wooden oil derricks that seemed to brood apocalyptically over the coast.

Huntington Beach High School's football team is still called the Oilers, and its icon is an oil derrick. But the city now brands itself as Surf City, and multimillion-dollar homes, gated communities and luxury hotels stand where oil fields once sprawled.

Even as crews were fighting to contain this month's oil spill, the City Council was voting 5 to 1 to shift the city's 900-vehicle fleet, including police cars, to renewable energy. More than 90% are still gasoline-powered, and the effort will take years.

"Yes, we have an oil history, but from a city standpoint, and for me personally, there's really no need to be pumping oil out of the ground anymore," said Dan Kalmick, 39, the first millennial on the City Council, who co-sponsored the measure. "We respect our history, but we are definitely moving forward."

As a snapshot of the city's past juxtaposed with its present, he pointed to the pump jacks operating in the parking lot outside City Hall, alongside car shades covered with solar panels.

"'Legacy' is the best way to describe oil production in Huntington Beach," Kalmick said. "It's our legacy, and it's a legacy business at this point."

"It was intended to be a tourist destination," said Darrell Rivers, who works at the Huntington Beach Historical Society. "It was originally intended to be the Pacific version of Atlantic City. There were a lot of people who wanted it to be a beach resort town."

In the 1910s, according to city historian Jerry Person, land was so cheap that an East Coast publisher gave away property parcels as a bonus with the purchase of a full set of the Encyclopedia Americana.

In December 1920, soon after the discovery of a large oil reserve ignited a frenzy of speculation in the city, Huntington Central Oil Co. took out a newspaper ad touting the promise of its 10-cent stock: "FORTUNE — FORTUNE — FORTUNE!!"

The wildcatters came; the population boomed; homes and trees were felled to build wells.

Rivers said Huntington Beach "has always struggled to figure out what it wanted to be — a beach town, an oil town, a manufacturing hub, a farming community, a quiet suburb. And even today we have those arguments."

But the city's relationship with oil has been vexed.

"There's always been an underlying resistance to just the presence and the physical appearance of the oil industry being everywhere," Rivers said.

Multiple factors contributed to Huntington Beach's long, slow death as an oil town. The wells became less lucrative when oil prices crashed in the 1980s, and ballooning real estate values incentivized development. Angry homeowners complained about the noise and smell of the wells in their increasingly expensive neighborhoods.

There had always been high-profile calamities: oil gushing into the wetlands, derricks turning into infernos. Off the coast, a tanker ran over its anchor in 1990 and spilled 417,000 gallons of crude, fouling the beach. The same year, under pressure from the city and environmental groups, Chevron agreed to close its 25 remaining wells on the ocean side of Pacific Coast Highway.

Along with the rigs, the vestiges of Oil City — such as the slab in the grass of Discovery Well Park that commemorates the city's first oil strike in May 1920 — are easy to spot.

State authorities are trying to clean up another industry remnant, the 38-acre toxic waste site at Magnolia Street and Hamilton Avenue known as the Ascon site. It was a landfill from the 1930s to the 1980s and a repository for oil waste.

Economically, oil has long been eclipsed by tourism in Huntington Beach. City spokesperson Jennifer Carey says Huntington Beach makes just $632,000 a year in oil well license taxes and pipeline franchise fees, which amounts to about 0.3% of the $228-million budget.

The city makes millions from its hotels, not just from property taxes but from a transient occupancy tax that brought it $16 million in 2019, much of it from the luxury hotels on PCH.

"The city was 'born' due to the booming oil industry," Carey said in an email, but has transitioned to prioritizing "clean energy and worldwide tourism."

"Even though you see rigs in the area, the oil industry is not very prevalent in the community today and isn't a significant revenue or labor source," Carey added.

The city whose growth was powered by oil is now battling a miles-wide slick of crude, caused when up to 131,000 gallons spilled from an offshore pipeline. (The pipeline extends to a platform in federal waters off the Huntington Beach coast but is not regulated by the city.)

One of the city's remaining oil fields sits at Edwards Street and Ellis Avenue, adjacent to a dog park where Claudia Albrecht, 52, visiting from Las Vegas, was letting her pet roam last week because the oil spill had closed the dog beach.

"Huntington is such a beautiful place," Albrecht said. "The beach is so long and wide. It's a shame. It's just a shame."

She and her husband were renting via Airbnb an accommodation near PCH and 14th Street, where the solitary oil rig pumps steadily behind barbed wire, on a nice residential block. "The first time we saw that, we thought, 'What is that? How is this possible, right next to a house?'"

Sammy Alloush, 40, has lived across the street from the incongruous-looking 14th Street oil rig for six months and has become accustomed to it.

"In the beginning, I was angry," he said. "I was like, 'Why isn't there a beautiful condo?' Then I thought, 'It's actually more work to get rid of it.'"

The Bolsa Chica Ecological Reserve sits on county property just north of Huntington Beach. Thomas Anderson, administrative director of Amigos de Bolsa Chica, an environmental group that has fought to preserve the wetlands from development, said the recent oil spill had not affected the reserve. But there are still some oil pumps amid the wetlands.

"It's an extreme irony that one of the main reasons that Bolsa Chica wasn't developed earlier is there were highly productive oil fields," Anderson said.

Multiple attempts over the decades to build an oil museum in Huntington Beach have foundered.

D.J. Waldie, a writer who has studied the history of coastal California, said it was important to put Huntington Beach in the context of the "oil belt" stretching to Oxnard.

Depending on one's perspective, images of oil derricks dominating the California coast in the 1920s could be seen as "environmental degradation" or the "corporate abuse of small landowners," Waldie said. They could also be seen as a reflection of "a kind of dream time," when poking a hole in the ground might "deliver unimaginable wealth."

"The California dream," Waldie said, is "painted in oil."

Kalmick, the City Council member, said he owns two electric cars and hasn't bought gas in two years. He said he hopes his 2-year-old daughter grows up in a city that has put oil behind it.

"I hope she doesn't have to know what an oil rig is," Kalmick said. "It's a bygone era."

What do we know about the Omicron variant?

A Somers Point man fighting for his life after setting himself on fire last week is a U.S. Army veteran under treatment for mental health issu…

Could Somers Point be getting another supermarket?

SOMERS POINT — National store chains have put their money on the city by opening stores such as Target, Chipotle and Taco Bell, which are all …

The façade is rosy again, but can Bally's casino's future be, too?