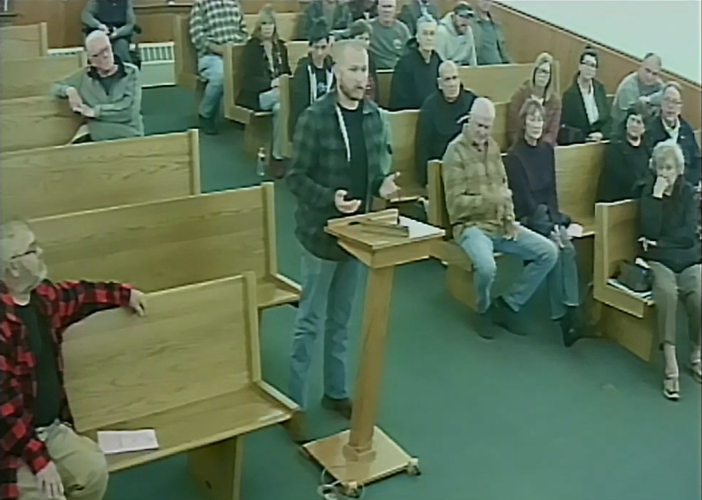 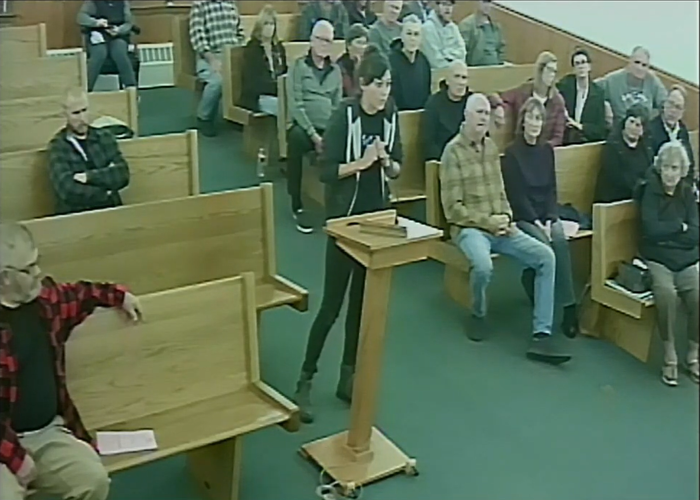 Amber Watkins says a neighbor’s home shooting range presents a safety concern, beyond issues with the noise of the shooting. 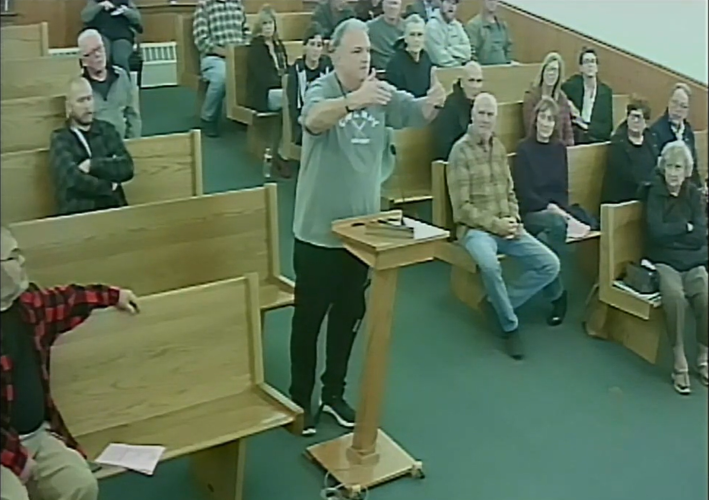 Paul Edgell speaks about gunfire in his neighborhood at a recent meeting of the Upper Township Committee. Several neighbors complained about a private firing range at someone’s house.

UPPER TOWNSHIP — A backyard firing range in a residential area has neighbors up in arms, with several asking the Township Committee to take action.

Several residents of Ortlieb and Prosit lanes attended a recent committee meeting, complaining about the noise of the gunfire and raising safety concerns. Many said they are gun owners themselves, but go to shooting ranges rather than fire guns on their property.

“I own guns. I go to the gun range,” said neighbor Amber Watkins. “You don’t see me popping them off my back door at a dirt mound. It’s not going to happen.”

Several neighbors said they have called the State Police, only to be told there is nothing police can do. The daytime shooting does not violate the township noise ordinance, and there is no ordinance keeping people from discharging legally owned firearms on their own property.

Neighbors want the committee to consider introducing one.

Paul Edgell, who described himself as an NRA member, said he has had backyard barbecues disturbed by the gunfire, saying it went on for about two hours. He said it was not a 9 mm pistol, but rather a rifle.

“Pop, pop, pop, pop,” he said. “Your dog runs in the house. Your life is shot for that day. How do you enjoy sitting on your deck?”

It’s not just the noise, other neighbors said. Michelle Watkins asked for an ordinance prohibiting target shooting near residences.

“It’s dangerous. I’ve had bullets ricochet off my neighbor’s tree past me,” she said at the meeting.

The homeowner, who attended the committee meeting, denied it was dangerous. If that were the case, he said, the State Police would have shut him down.

“They have never told me to stop shooting, and that is because what I’m doing is safe,” said Tom Runyon.

Runyon is a police officer in another community and a firearms instructor.

As his neighbors described it, he has built a berm on his property, toward which he fires. He told the committee he has a small firing range set up parallel to Route 9. He said he had never heard anything about a ricochet until that evening, adding that would be extremely rare.

He added he has sought to cooperate with neighbors.

Those who have given him their phone numbers, he texts to let them know when he is planning to shoot, and that mostly takes place during the day on weekdays, when many are at work and children are in school.

Sometimes, he has friends over on weekends to shoot as well, he said.

Some of the neighbors said it would be different for someone with five or six acres in a remote area of the township, but they argued that properties are too close to each other in their neighborhood for the shooting to continue.

Upper Township approved a resolution in 2020 identifying the township as a Second Amendment sanctuary. The vote was primarily symbolic and did not change the enforcement of any laws, but it is an indication that the township is not opposed to gun ownership.

Noise is an issue, Mayor Curtis Corson said at the meeting.

“Noise is an issue with lawnmowers. Noise is an issue with the Deauville with music,” he said. Other speakers had raised concerns about the time landscapers operate machinery at the same meeting, and some neighbors of the longstanding Strathmere bar and restaurant have repeatedly complained about noise there.

The committee did not take any action, but members indicated that township Administrator Gary DeMarzo was exploring the issue.

But neighbors said they were not solely concerned about the noise. Hunters may not fire within 450 feet of a home, they pointed out. Runyon’s firing range is far closer than that to the neighboring homes, but there is no such limit for target shooting.

Gary Watkins said there are children and grandchildren in the neighborhood.

“I don’t deprive anyone the privilege to utilize their property within their God-given rights. But this just doesn’t even make sense,” he said. “This is about public safety.”

The Second Amendment sanctuary movement: Why now?: A raft of new gun control laws has persua…

Others said the repeated sound of gunfire can be very disturbing for children.

“I’m not here to debate people’s constitutional rights to own firearms and use their firearms. I just do not think this is in any way safe or responsible or good for Upper Township,” said Tim Hanna, another neighbor.

Other speakers said no matter how well trained someone is, they cannot guarantee where a bullet will end up once it is fired. They also said their concerns were not solely about a single neighbor, saying they have seen targets put up near Route 9 in other neighborhoods.

At one point, one of the people who was complaining turned to Runyon, saying, “First of all, I want to say welcome to the neighborhood.”

“I hope you’ve taken something away from the night,” Corson told Runyon.

Committee members closed the meeting without stating whether an ordinance would be introduced, or when that might happen.

Upper Township kicks off the season with community tree lighting

UPPER TOWNSHIP — Music, cookies and holiday cheer were on the agenda Monday for the annual holiday tree lighting ceremony at Township Hall.

Amber Watkins says a neighbor’s home shooting range presents a safety concern, beyond issues with the noise of the shooting.

Paul Edgell speaks about gunfire in his neighborhood at a recent meeting of the Upper Township Committee. Several neighbors complained about a private firing range at someone’s house.