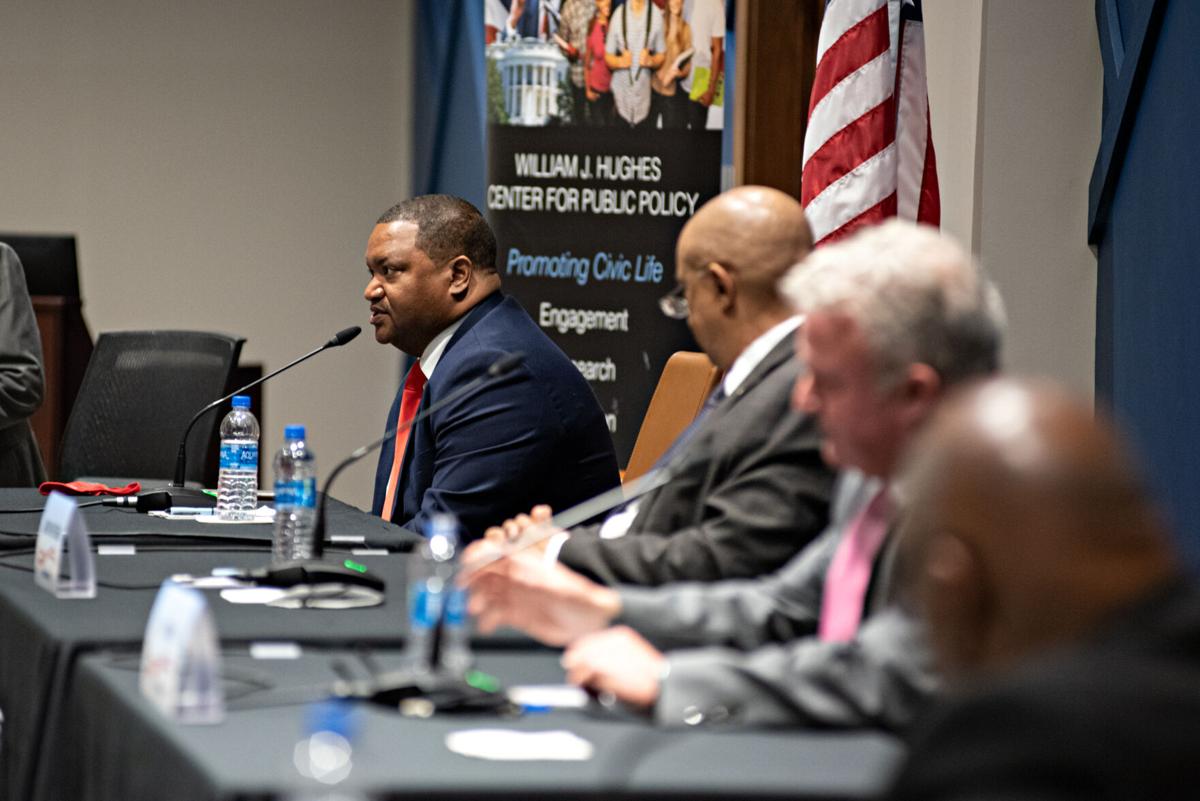 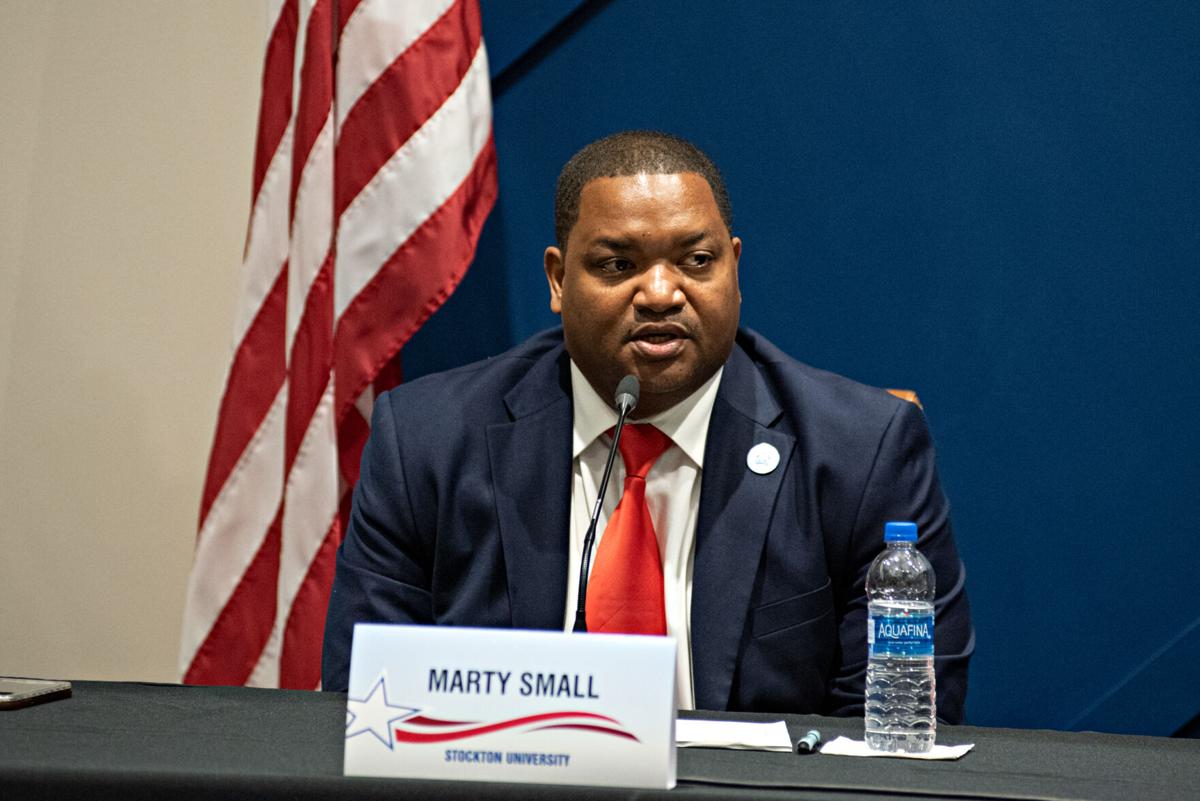 Democratic Mayor Marty Small Sr. touted his administration's fiscal policies, which have reduced the city budget to less than $200 million. 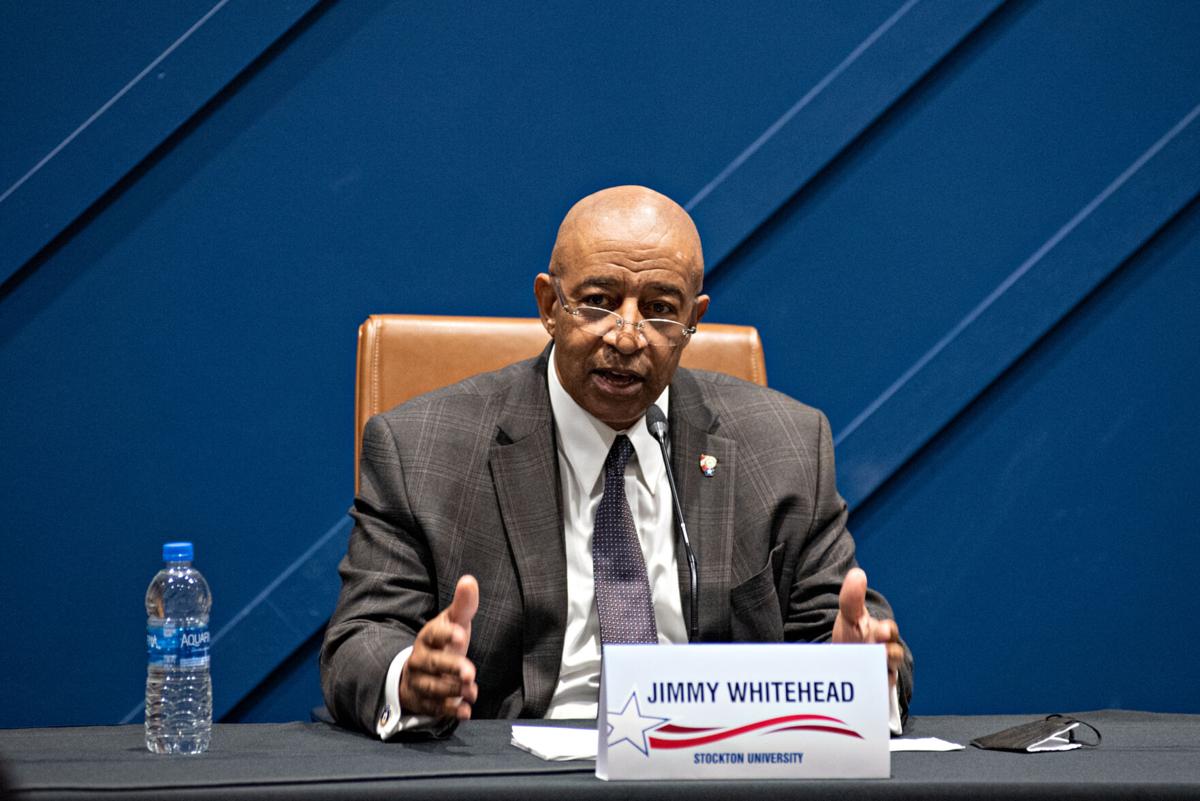 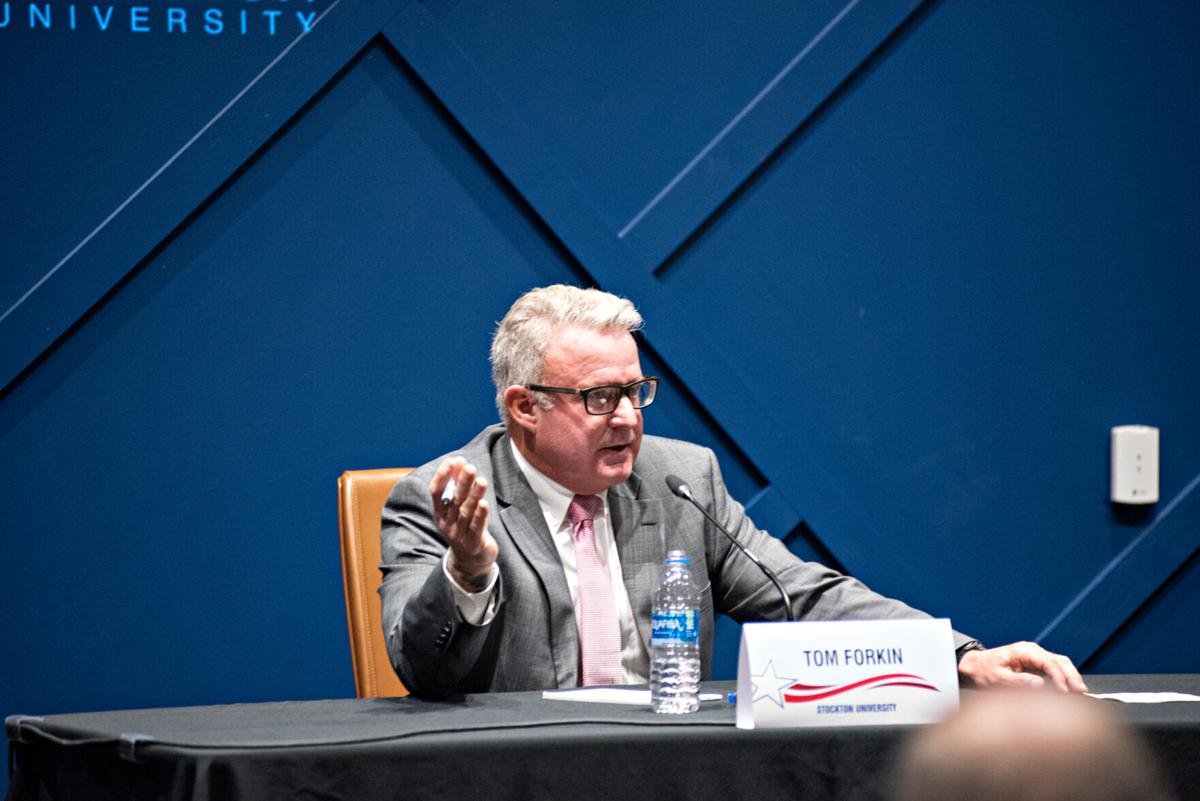 ATLANTIC CITY — The three mayoral candidates who qualified to participate in Tuesday night’s debate at Stockton University threw some hard personal jabs at each other, but sometimes agreed on tough issues.

Both incumbent Democratic Mayor Marty Small Sr., 47, and Republican candidate Tom Forkin, 59, supported City Council in its decision to end the needle exchange program for intravenous drug users in the city, while independent candidate Jimmy Whitehead said it should remain.

“You can’t just shut it down and walk away,” Whitehead said. “You have to come up with better solutions.”

“I absolutely agree with City Council,” Forkin said. “I want to note my sister Kelly died of addiction. (The needle exchange) is giving people the means to kill themselves … (and) enables drug dealers,” he said, to set up shop knowing customers will have access to free needles.

“We all have people in our families who struggle with addiction,” Small said. “But why does it have to be in Atlantic City? Why not in neighboring towns?”

All three agreed the city needs more police officers but had drastically different ideas of how many more cops are needed and how the city should pay for it.

ATLANTIC CITY — The resort’s syringe exchange program has been spared for another month.

“I served as police legal adviser in the (Mayor Jim) Whelan administration, and I can tell you we are not 60 officers down, more like 260,” said Forkin, who said room and luxury taxes collected in Atlantic City should help pay for more police, rather than going to the state. “We used to have three platoons working eight hours each, now we have two working 12 hours. It’s a serious manpower shortage that puts the public at risk.”

Small said his administration is working with the state and the Casino Reinvestment Development Authority, which has funded the hiring of more police without raising local taxes.

Whitehead argued more officers are needed, but taxpayers shouldn’t have to pick up the tab. Instead, he suggested businesses be taxed more to pay for more officers, and public money being used to help build a new ShopRite in the city should instead be used for public safety and road repaving.

“We should increase the police force twofold or threefold,” Whitehead said. “Private enterprises should be responsible. We should bring in more private sector into town to pay their fair share.”

Whitehead consistently criticized the CRDA granting free land for the ShopRite site, and funding the cost of building the store, which he estimated at $18 million. But he also mistakenly called it city-owned land, prompting corrections from Small.

Afghans in Atlantic City hoping for the best, fearing the worst for home country

ATLANTIC CITY — For almost all his life, 45-year-old Jalil Hashimi’s country of Afghanistan …

“Once again this guy is ill prepared. It’s not city land, it’s CRDA land,” Small said of Whitehead. “Everybody in the room knows it.”

“Atlantic City is getting something it hasn’t had in years — a supermarket,” Small said.

And Small talked about how his fiscal policies took the city budget to under $200 million, after it had hit a high of more than $260 million in previous administrations.

“I don’t know that fiscal responsibility is giving yourself a raise in the middle of a pandemic,” Forkin said of Small’s raise from $103,000 to $141,000 a year in 2020. “We’re in $500 million debt that the state of New Jersey saddled the city with. I don’t think it’s fiscally responsible at all.”

The city’s huge debt payments will dramatically lessen in 2027, Small pointed out, after years of making payments of about $38 million a year.

“The numbers don’t bear anything you are talking about,” Small said.

ATLANTIC CITY — About five years into a state takeover of the city, it's about halfway to ge…

Only Forkin said he would continue to oppose the takeover, which recently was extended another four years by state legislation.

“I said it was unconstitutional when they proposed it,” Forkin said. “I went to City Council and the former mayor and begged them to sue the state in federal court on civil rights grounds. ... The state can’t even run itself.”

The other candidates in the race did not qualify for the debate, because they have not raised enough money for their campaigns, under the rules of the William J. Hughes Center for Public Policy at Stockton, which organized the debate.

The one-hour debate is available to view at stockton.edu/hughescenter.

ATLANTIC CITY — Politics in this city sometimes gets so personal, it starts to feel like a family feud.

ATLANTIC CITY — The preliminary hearing in a lawsuit that will decide the future of the city’s needle exchange program will begin 9 a.m. Frida…

ATLANTIC CITY — Mayor Marty Small Sr.’s victory on Election Day earned him more than just another year in office — it also netted him a 37% sa…

Democratic Mayor Marty Small Sr. touted his administration's fiscal policies, which have reduced the city budget to less than $200 million.