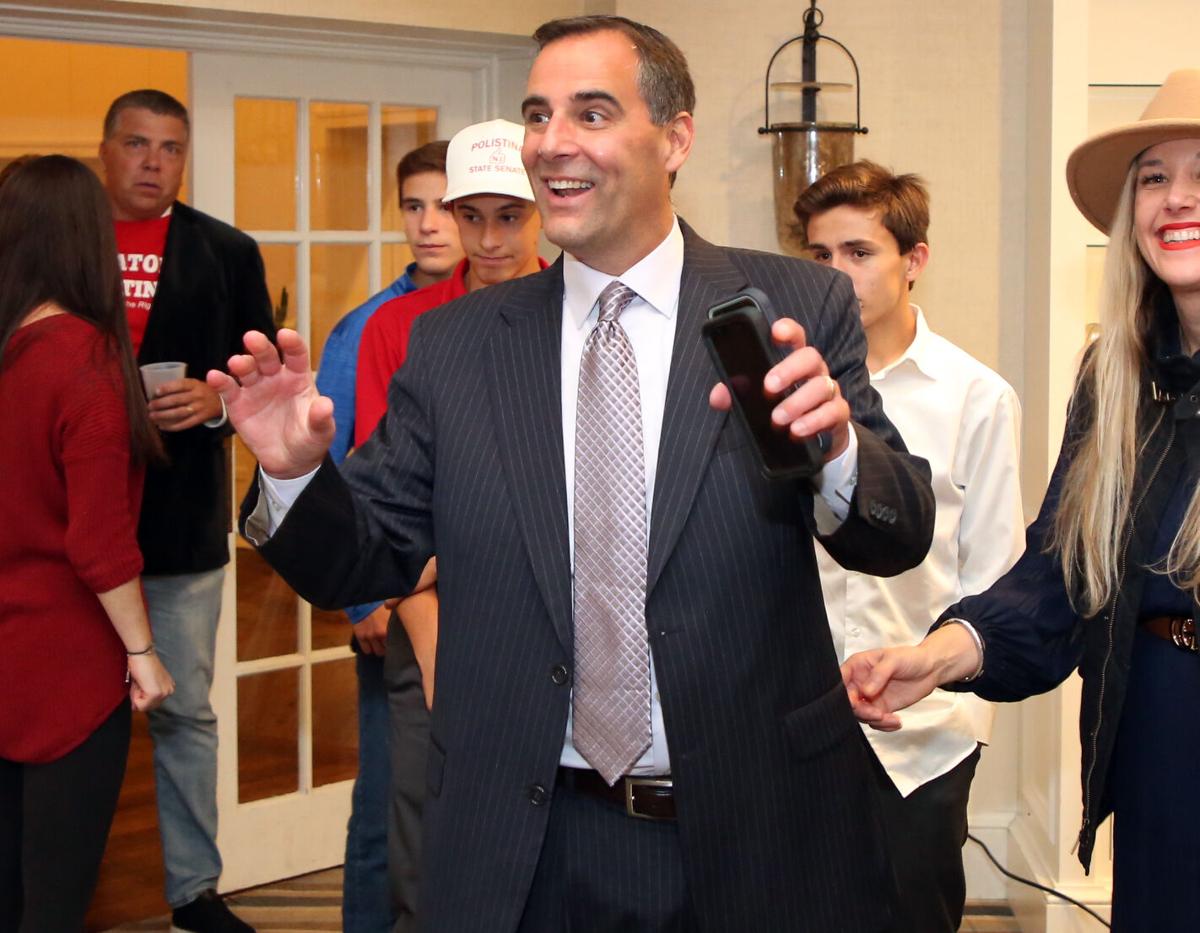 State Sen.-select Vince Polistina is greeted by well wishers Tuesday as he arrives at the Republican election night party at Linwood Country Club. 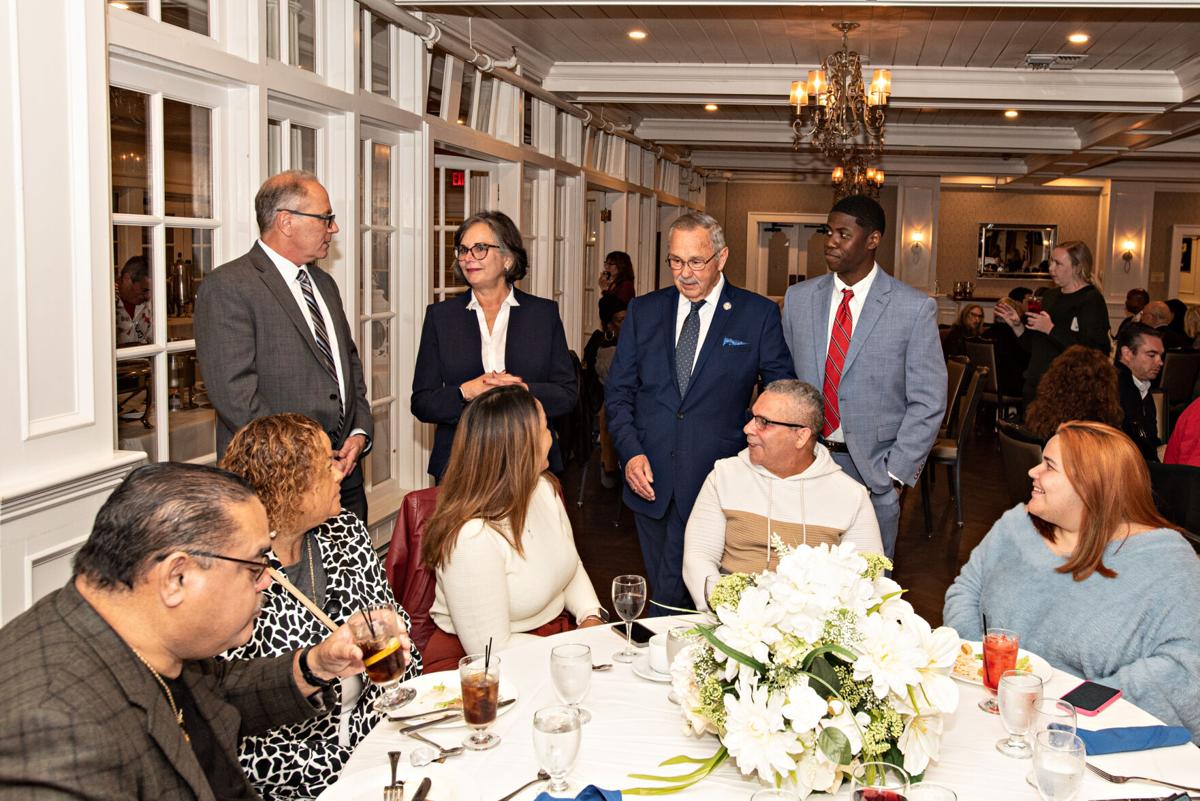 Polistina celebrated at the GOP party at Linwood Country Club, and gave a speech about 10:30 p.m. celebrating his win and thanking his supporters and family.

“At the end of the day, all politics are local and local communities and local candidates are what helped to pull this off, so thank you all of you,” he said.

At the Democratic party at Atlantic City Country Club in Northfield, the mood was somber, as candidates and party leaders huddled in what they called the “war room” to compile numbers.

At about 11 p.m. the state and county candidates came out and, one by one, conceded their loss — with the exception of 3rd district county commissioner candidate Thelma Witherspoon, who said her race remained too close to call.

“Obviously this isn't a night we hoped to have. We had a lot of national headwinds going against us, and state headwinds,” said Democratic county Chair Mike Suleiman to the crowd of about 100. “We should have no regrets, we ran a great race.”

"We had great things we were going to do for Atlantic City and Atlantic County — a lot of things on the horizon," Assemblyman Vince Mazzeo said as he conceded the race for State Senate. "I don't know if it will get done now ... It saddens me because Atlantic County deserves better.:

Mazzeo said it was his 9th race since entering politics 18 years ago, and his first loss.

Shortly before 11 p.m., Polistina told his crowd that Mazzeo had called to congratulate him.

With 14,256 mail-in ballots counted about 9:15 p.m. and some still to go, Mazzeo garnered 7,554 votes to 3,456 for Polistina, according to Atlantic County Board of Elections officials.

It was the same in the Assembly races.

Republicans Don Guardian and Claire Swift had 3,749 and 3,608 votes by mail, respectively.

Roughly 75 people gathered in Linwood to show support for the Republican candidates.

“We’re feeling good,” Swift said as the team awaited results. “We have a great group here tonight, and we’re really looking forward to getting the results out and hopefully we’re gonna have a victory tonight. Right, Don?”

Guardian said waiting for results made him “nervous as always.”

“You know, it depends on voter turnout,” Guardian said. “Usually, the Democrats worry about the rain and the bad weather because in the old days that’s the people that worked and were coming after work and stuff. I can tell you from my last election as mayor, the worst thing is bad weather because those voting people are my base. And they didn’t come out — little cold, little rainy things like that. So we’ll see.”

The Senate seat opened up after incumbent state Sen. Chris Brown, R-Atlantic, declined to run for reelection and instead opted for a job with Democratic Gov. Phil Murphy’s administration.

There are still some vote-by-mail ballots to count, along with an unknown number of provisional ballots, which are mostly paper ballots filled out at the polls when a voter arrives who had been sent a vote-by-mail ballot. The provisionals will only be counted once it is determined the voters did not also return mail-in ballots.

The same poll also predicted a virtual tie in the Assembly race, as it found only two percentage points separated the field, which was less than the poll’s margin of error.

Election spending in the 2nd Legislative District had exceeded $6.64 million as of late October, behind only the 8th District at $6.7 million as the states’ costliest, ELEC figures show. There are 40 districts in the state.

They are two of the most competitive districts in the state, where either party has a chance of winning.

The all-time record for the district was $7.1 million, which this year could surpass once all reports are in.

One record has already been set.

Garden State Forward, a federal 527 political organization run by the New Jersey Education Association, the state’s largest union, has spent $3.6 million so far in the general election. Most of its funds ($3.5 million) have been funneled into the 2nd legislative district in support of the Democrats.

In the 1st District, candidates were ready for a long night Tuesday, but Republicans seemed optimistic.

Mike Donohue, chairman of the Cape May County Republicans, said GOP candidates had a strong showing throughout the county. Typically, Democrats do better in Cumberland County in the legislative district compared to the more solidly red Cape May County.

But Democratic Senate candidate Yolanda Garcia Balicki was not willing to throw in the towel. With early voting results in Cape May County counted, she looked in striking distance of Republican incumbent Michael Testa, 50.64% to 49.36%.

“In Cape May County, I’m not that far down,” she said. “I’m nervously excited.”

But those numbers did not yet include votes cast Tuesday. Once those posted about 40 minutes later, she was well behind in the county. Unofficial results showed Testa with 23,915 to 11,426 for Garcia Balicki.

Results were similar in Cape May County for the Assembly race, with Simonsen and Antwan McClellan each taking more than 23,000 compared with a little over 11,000 each for Democratic candidates John Capizola and Julia Hankerson.

Pre-election polls put the Democrats as a longshot in the southern New Jersey district, and campaign finance reports showed the GOP as far better funded in the race.

“Two years ago, Mike Testa was also a longshot,” Garcia Balicki said. “I think it’s going to be close or we’re going to come out ahead. I’m really feeling hopeful.”

“I hope that carries down the ballot. I know how hard we worked,” she said.

The miniature Borough of Pine Valley is expected to disappear by the end of this year. The police chief will retire, the handful of mostly par…

One of the three seats on Wildwood Crest’s Board of Commissioners remained too close to call Wednesday, with the seat of seven-term board memb…

Provisional ballots still to be counted: 2,401 in Atlantic, about 650 in Cape

Counties have until Nov. 20 to finalize election results and send them to the state, and for thousands of good reasons — the paper provisional…

Red wave driven by GOP turnout, but will it last?

In the wake of Republicans sweeping into office across South Jersey, knocking out even longtime Democratic State Senate President Steve Sweene…

The 2nd Legislative District race to represent the heart of Atlantic County is now the fifth costliest in New Jersey history, with $7.7 millio…

Guardian, Swift sworn in to Assembly, ready to work on state's affordability

Atlantic County’s new Republican Assembly members, Claire Swift and Don Guardian, made the trip to Trenton on Tuesday to get sworn in as state…

The hotly contested race in New Jersey’s 2nd Legislative District is a virtual tie on the Assembly side, but the Democrat leads in the Senate …

State Sen.-select Vince Polistina is greeted by well wishers Tuesday as he arrives at the Republican election night party at Linwood Country Club.