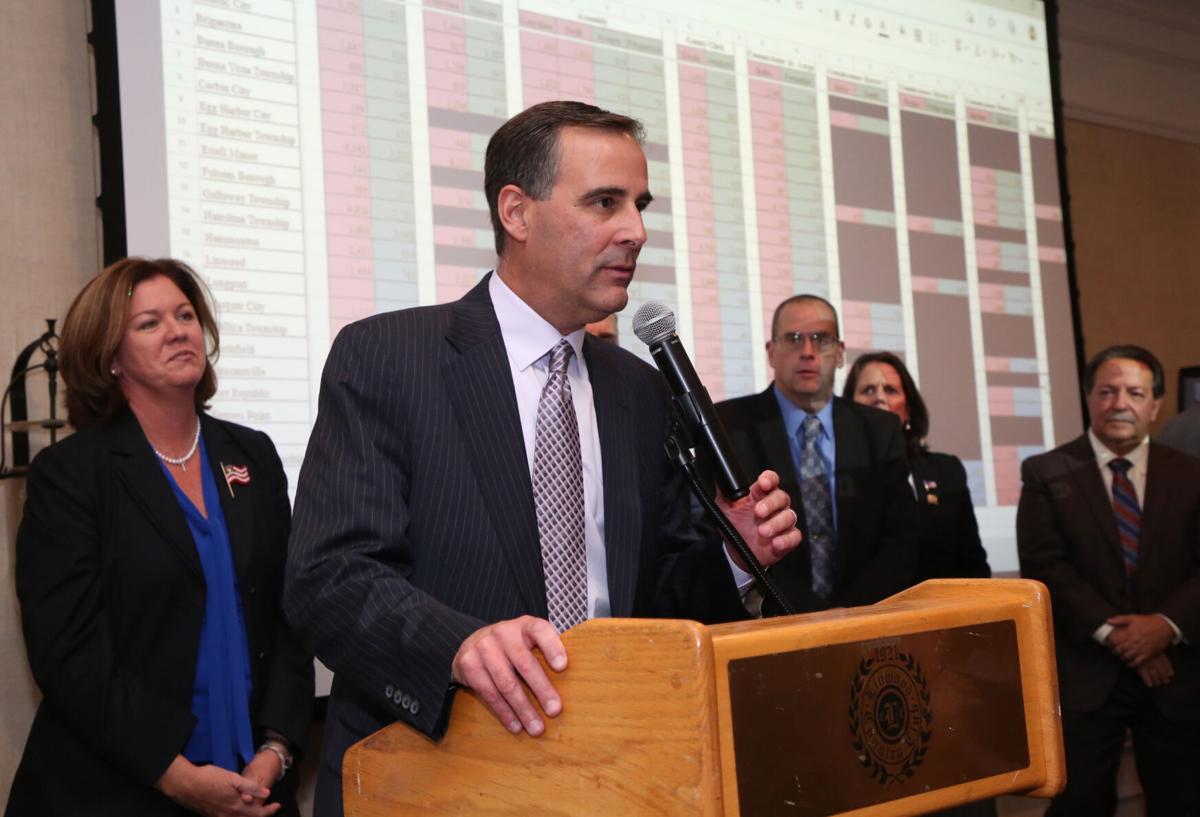 Four of the city's nine casinos could close if the amendments to the casino PILOT are not approved, Senate President Steve Sweeney said Monday during a hearing on the bill.

The comments were made during the Senate Budget and Appropriations committee hearing on the bill. The bill was approved by the committee and released to the full senate for a vote.

The bill, S4007, is sponsored by Sweeney, D-Salem, Gloucester, Cumberland.

Sweeney said mistakes were made when the drafted the first PILOT legislation.  Bill S4007 would correct those mistakes, he added.

Proposed changes to the casino payment-in-lieu of taxes taxes law could see payments reduced by $55 million in 2022, according to a four-page report from the state Office of Legislative Services.

"We expect the bill will reduce the PILOT payment by $55 million in CY 2022, and probably between $30 million and $65 million in subsequent years through 2026," the analysis stated. "New mandatory payments of $5 million per year in CY 2024-2026 will partly offset this. There may also be some redistribution of IAT revenue, if those revenues exceed the CRDA and city’s debt service requirements." 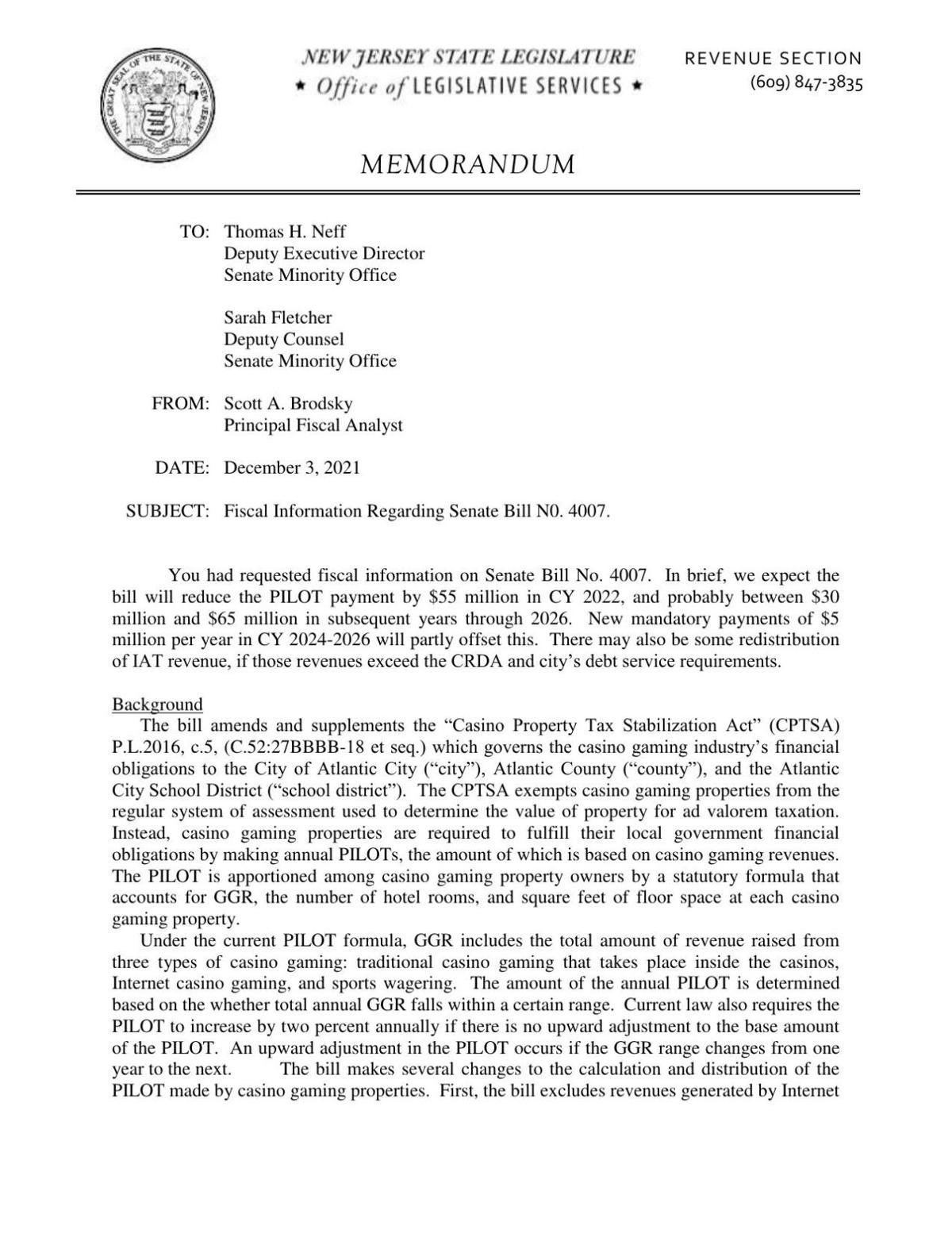 Hours before the hearing was scheduled to start, Senator Vince Polistina, R-Atlantic,  expressed his opposition to the new PILOT legislation. He said a Dec. 3 analysis by the Office of Legislative Services showed the a reduction in revenue that could impact Atlantic County tax payers.

Last week state officials confirmed that a financial analysis had been performed. Atlantic City Mayor Marty Small Sr. and legal adviser Steven Perskie, voiced support of S4007 last week, but did not provide a copy of an analysis. Perskie cited his support as being based on his reading of the bill and an analysis by the state Department of Community Affairs and the state Department of Treasury. Small said he has had many conversations about it with state officials.

The OLS report however, only became available late last week.

The committee meets 1 p.m. in the Statehouse in Trenton.

It was introduced June 28 and passed out of the Senate Community and Urban Affairs committee last month, but several members and Chairman Sen. Troy Singleton, D-Burlington, said much more information on the bill’s details was needed before they could vote for its final passage on the Senate floor.

An Assembly version was introduced in May by Assemblyman John Armato, D-Atlantic.

Last week, Atlantic City Mayor Marty Small Sr. said the city will benefit financially if S4007 passes, even though sports and internet betting would be removed from the calculations for how much casinos would pay.

Small and his adviser, former Superior Court Judge Steven Perskie, did not provide any financial analysis or budget estimates. The city splits the payment with the county and the city school district.

Sweeney PILOT bill would cut casino payments to $110M in 2022

But the bill offsets any decrease by establishing new pots of money for the city to use for infrastructure and clean and safe streets, Small said. It also guarantees the city will get at least as much as it did this year going forward, with a 2% increase annually, he said.

A Casino Association of New Jersey spokesman said Tuesday night that the amended bill narrows the window on PILOT payments to between $100 million and $120 million, based on only brick-and-mortar casino revenues. But it also provides the full amount casinos pay in investment alternative taxes to the city — which he estimated at up to $60 million.

The full amount of IAT taxes, however, was due to go to the city starting in 2022 under the current legislation.

The amended bill would also continue a $5 million per year to the city for debt relief through 2026. Under the original bill, that $5 million annual payment would phase out after 2023.

The IAT is a 1.5% tax levied on gross gaming revenues and 2.5% on internet gaming gross revenues. The current law gave casinos the ability to keep some of that revenue if their payments topped pre-PILOT property tax obligations, but that clause was due to end in 2022.

Democrats for State Assembly, Senate say casino revenue has changed, so should PILOT

One in a series of interviews with candidates in the Nov. 2 general election, based on edito…

The base PILOT payment of about $150 million in 2020 was based on 2019 revenues. It fell somewhat in 2021 to about $130 million due to the impact of the COVID-19 pandemic on the industry in 2020, but it was less of a drop than expected because of strong internet and sports gaming revenues.

Assembly PILOT bill to be heard by Appropriations committee on Monday

The Legislature will vote Monday on bills to lower casino payments in lieu of taxes, as some lawmakers continue to say they have not gotten th…

TRENTON — Lawmakers are expected to quickly pass more than 100 bills on Monday, the last day of the 2020-21 legislative session, including a n…

A wildfire at Pilot Mountain State Park, about 20 miles northwest of Winston-Salem, is only 20% contained as of Tuesday afternoon.