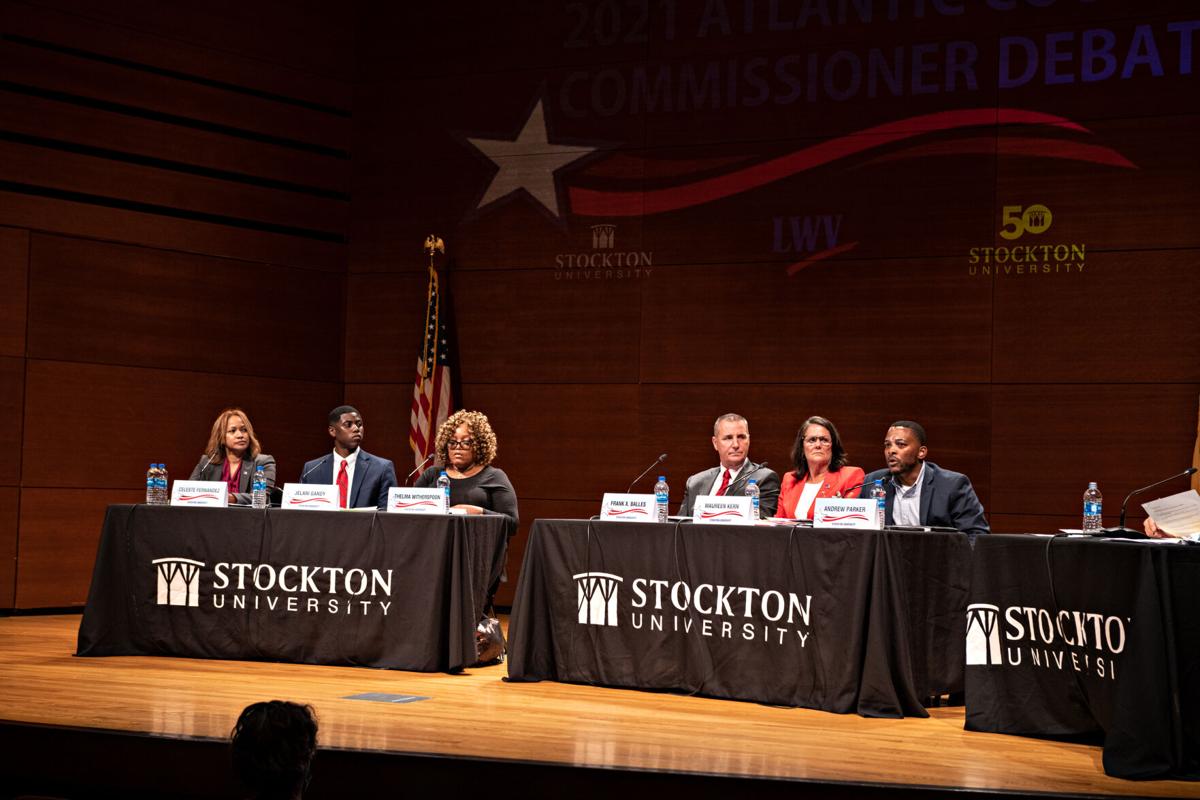 Thursday's debate featured six candidates for the Atlantic County Board of Commissioners. Candidates for the county's 5th District did not debate as scheduled, as Democrat William Beyers was unable to participate. 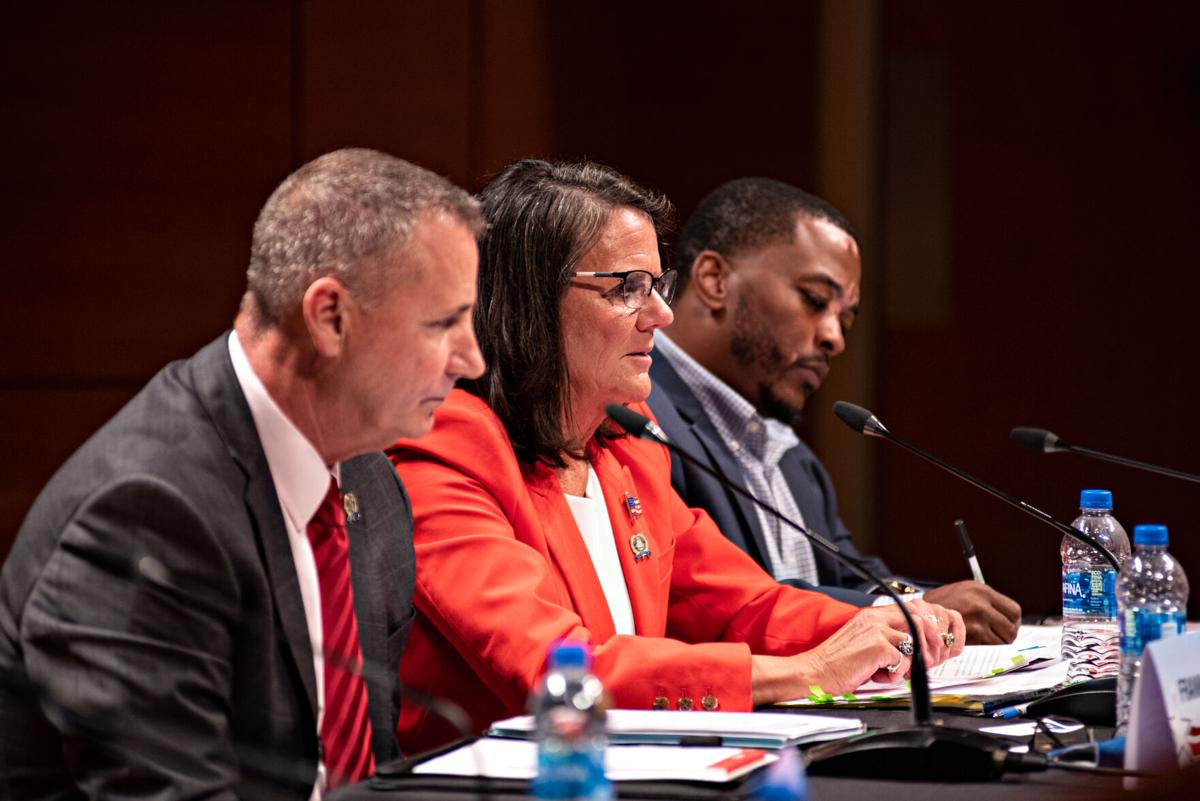 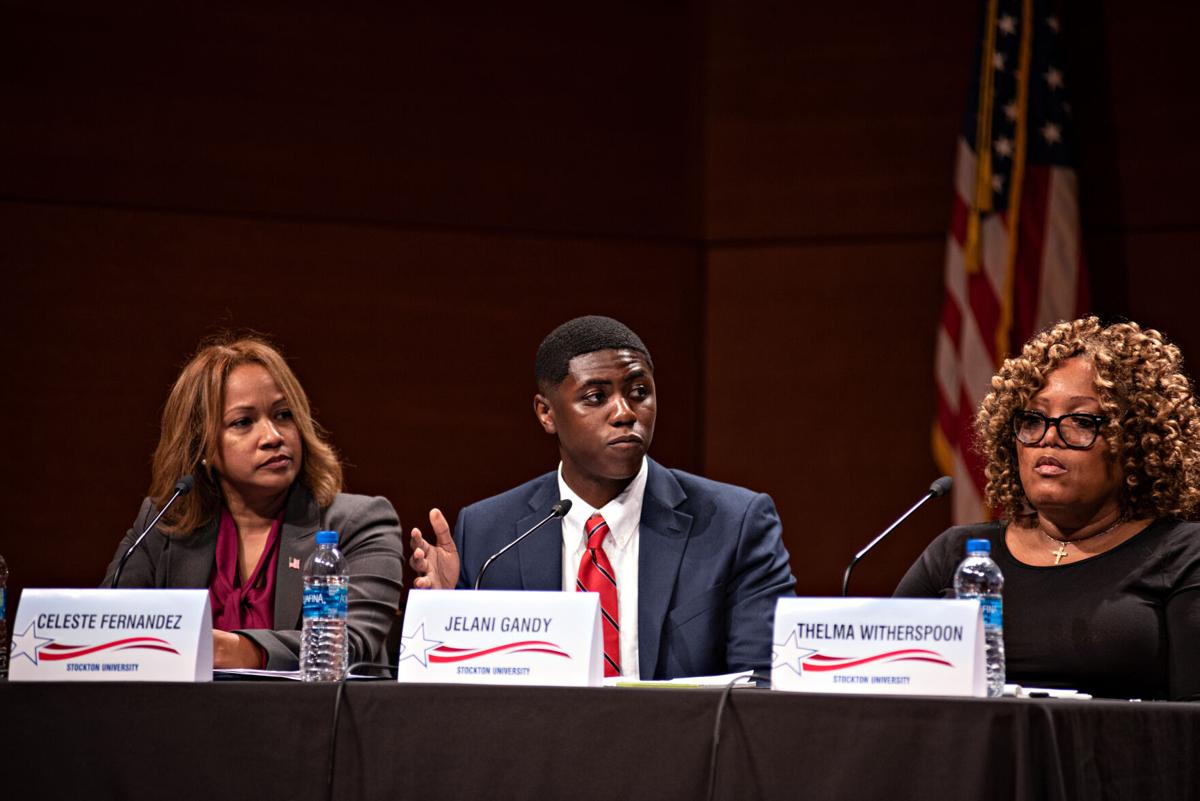 GALLOWAY TOWNSHIP — Atlantic County commissioner candidates debated Thursday night at Stockton University, with the three Republicans stressing their experience in government and the three Democrats focusing on the need for change and better minority representation.

“We need new leadership. Yes, experience is always good … (but) we can’t do the same things and expect different results,” said Democrat Celeste Fernandez, a small business owner from Egg Harbor Township who is challenging incumbent Republican Frank X. Balles for at-large commissioner and who said minority communities are suffering from high rates of unemployment, food insecurity and hopelessness.

Balles, a former Atlantic County sheriff, focused on the programs he put together as sheriff, such as a program to keep people in their homes during the foreclosure crisis after the 2007-09 recession. For a time, Atlantic County led the nation in foreclosures, because Atlantic City was also hit by a downsizing of the casino industry that caused a loss of thousands of jobs in the county.

Fernandez said she was frustrated that Republican candidates repeatedly said there are plenty of social services available for people in need in the county, but more education has to be done to get the word out about them.

“Our opponents don’t know how to resolve the problem. They are the problem,” Fernandez said, because they don’t know the people in the needy communities well enough to serve them.

“As the saying goes, it takes a village,” Balles said of cooperation among municipal, county and state government. “When I was sheriff I created the REAL Help program for families facing foreclosure to help families stay in their homes instead of being evicted. That’s what I have done in the county.”

District 2 Democrat Jelani Gandy, a recent college graduate from Linwood, is challenging incumbent Republican Maureen Kern, a Republican from Somers Point who is the national sales manager for Caesars in Atlantic City, and has three adult sons and one grandchild.

When asked about global warming and how he would address it as a commissioner, Gandy said more has to be done to protect the area from sea level rise, as it is accelerating faster in Atlantic County than most other places around the globe. Then he said Kern’s hometown of Somers Point had to shut down its bay beach in 2019 due to bacteria levels, seeming to blame her for that as she is a former councilwoman there.

“When you talk about Somers Point and the beach, the same thing happens to many beaches. That’s why we test those waters,” Kern said. “We shut them down right away to protect our people in the city and those who visit our beaches, and that’s the right thing to do.”

Originally the debate was also supposed to include two candidates running in District 5, which covers the western part of the county, but Democratic candidate William Beyers, of Hamilton Township, was unable to participate. Republican James Bertino, of Hammonton, was in the audience, and said he was not allowed to participate without his opponent.

Instead, the LWV and the Hughes Center moved the 2020 special commissioner election debate to Thursday night. It had originally been scheduled for a later date.

Witherspoon was certified the winner in November after getting 15,034 votes to Parker’s 14,748, but a judge decertified her win in January after Parker contested the results. The county clerk had sent ballots without the 3rd District race on them to 338 voters in the district who should have had it on their ballot. Since Parker lost by just 286 votes, in March, the judge ordered a new election.

Witherspoon appealed, but an appellate court agreed with the Atlantic County judge on June 29 and sent it back to him for final orders.

Witherspoon, a former city worker and former Atlantic City Board of Education president; and Parker, a teacher in the Atlantic City School District, each stressed the need for economic diversification as a way to improve the lives of county residents.

“One thing I learned being the president of the board of education, I’m only one vote,” Witherspoon said. “We have to collaborate with different entities … we need to collaborate on how to keep things going all year long.”

“We need to diversify our economy, we know this,” said Parker, a math teacher in the Atlantic City School District. “We need more than just casinos. We need to bring more jobs in. We are doing that with aviation and working with the Atlantic County Economic Alliance. We need better paying jobs in the county.”

He said his experience in economic development on the Egg Harbor Township Committee would serve him well as a commissioner.

The debate remains available to view at stockton.edu/hughes-center.

TRENTON — Democratic Gov. Phil Murphy and Republican Jack Ciattarelli sparred in an at-times testy and raucous debate Tuesday in the first of …

HAMILTON TOWNSHIP — The Township Committee on Monday voted unanimously to hire Erin Crean as its community development director. She will assu…

Tug of war between government officials, forecasters on if Ida's threats were communicated correctly

Thursday's debate featured six candidates for the Atlantic County Board of Commissioners. Candidates for the county's 5th District did not debate as scheduled, as Democrat William Beyers was unable to participate.