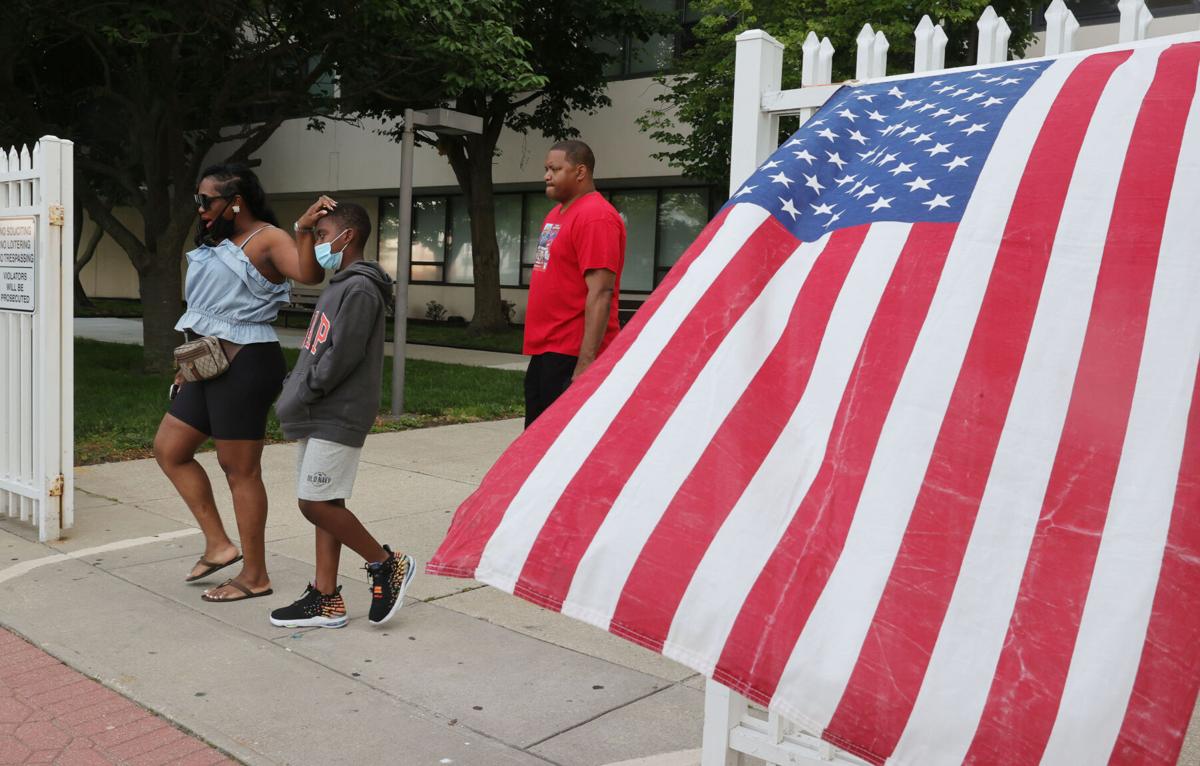 Atlantic City Mayor Marty Small Sr., along with his wife, La’Quetta, and their son Marty Jr. and daughter Jada, not shown, cast their vote Tuesday at Community Haven during the primary election. 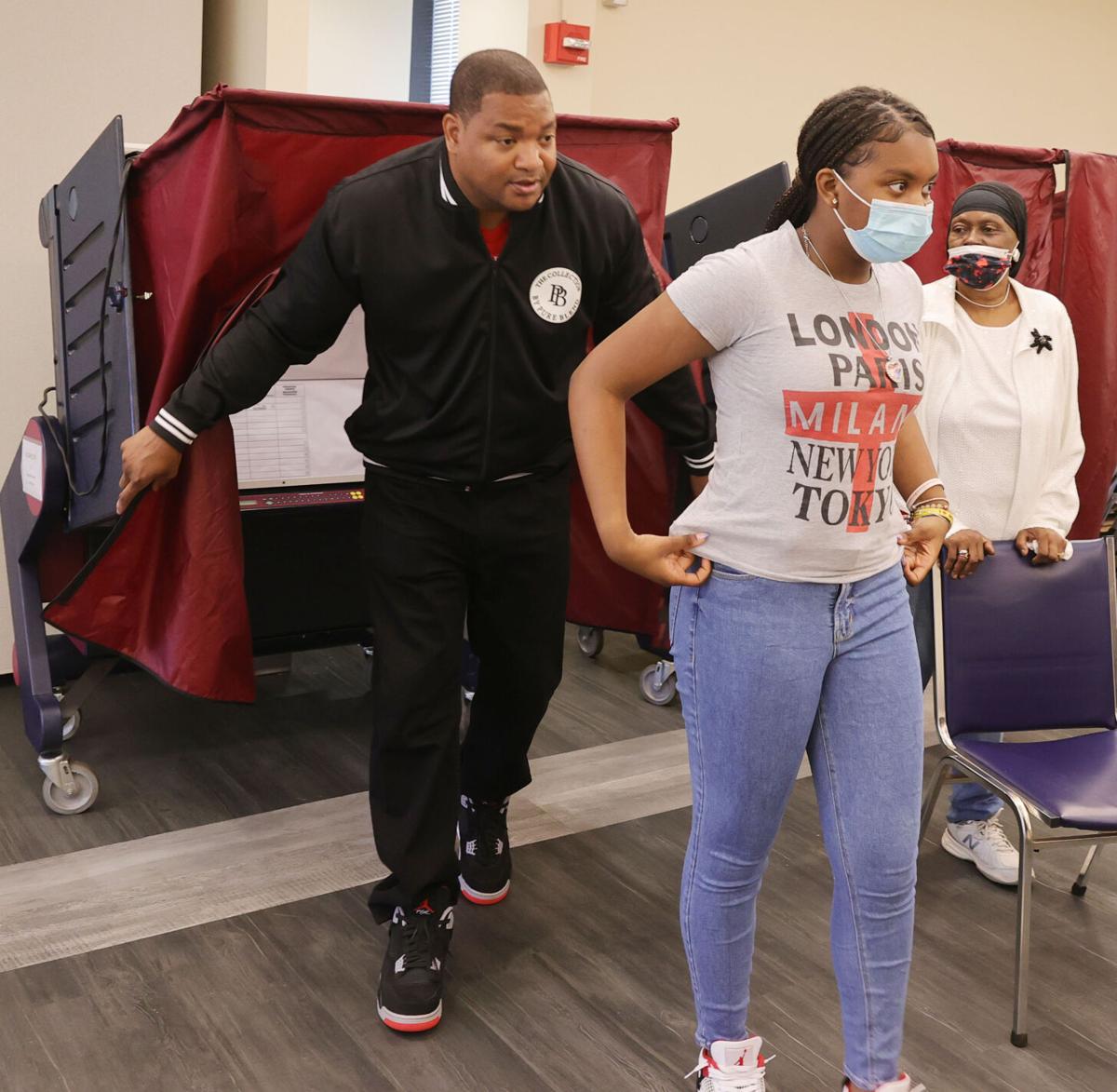 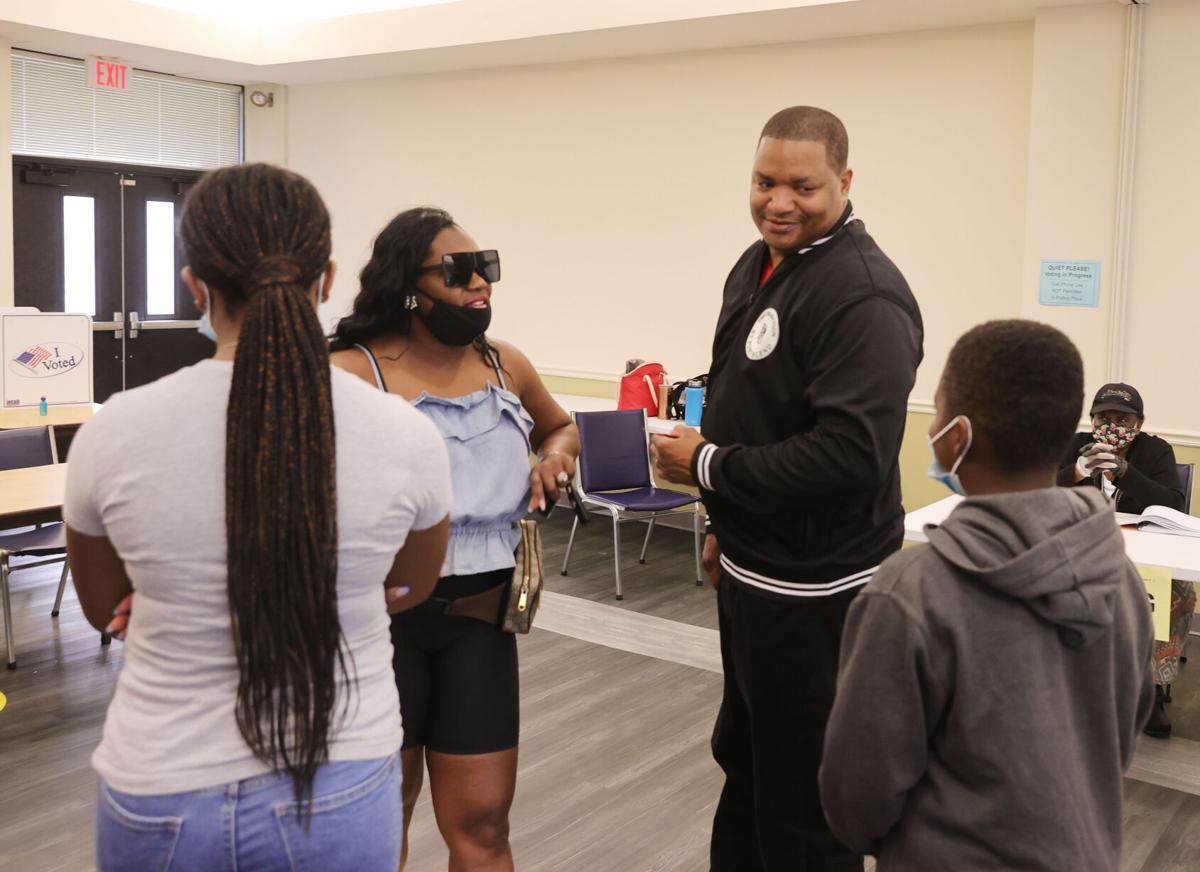 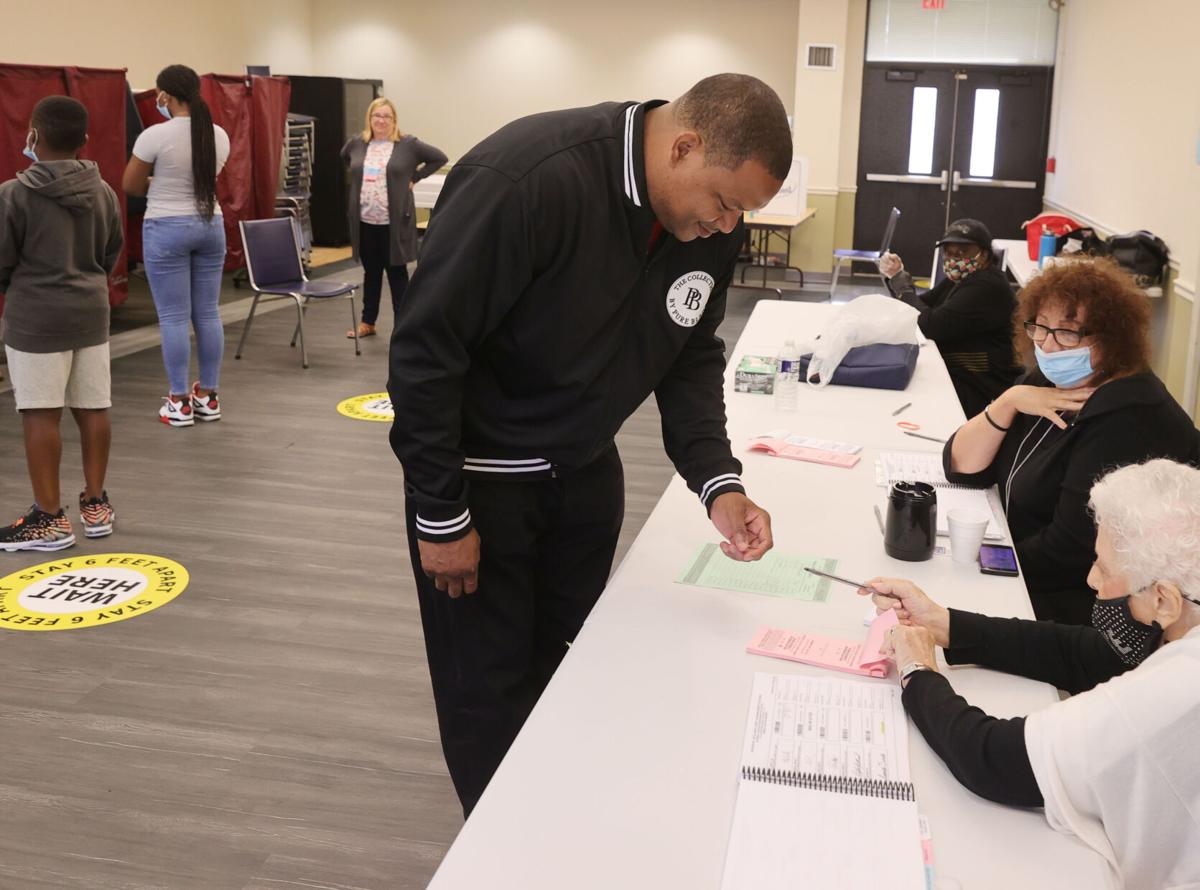 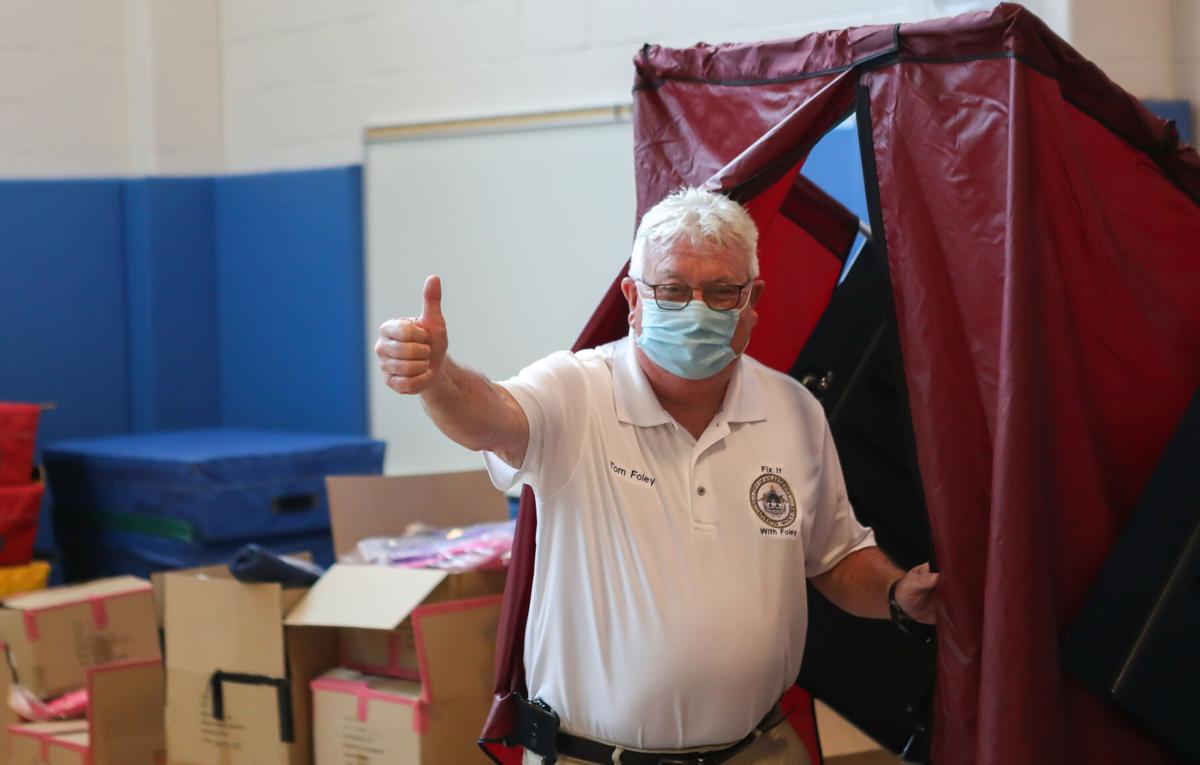 Democratic mayoral candidate Tom Foley gives the thumbs up after placing his vote for the Atlantic City Mayor. Atlantic City, NJ. June 8, 2021 (Kristian Gonyea, For The Press of Atlantic City) 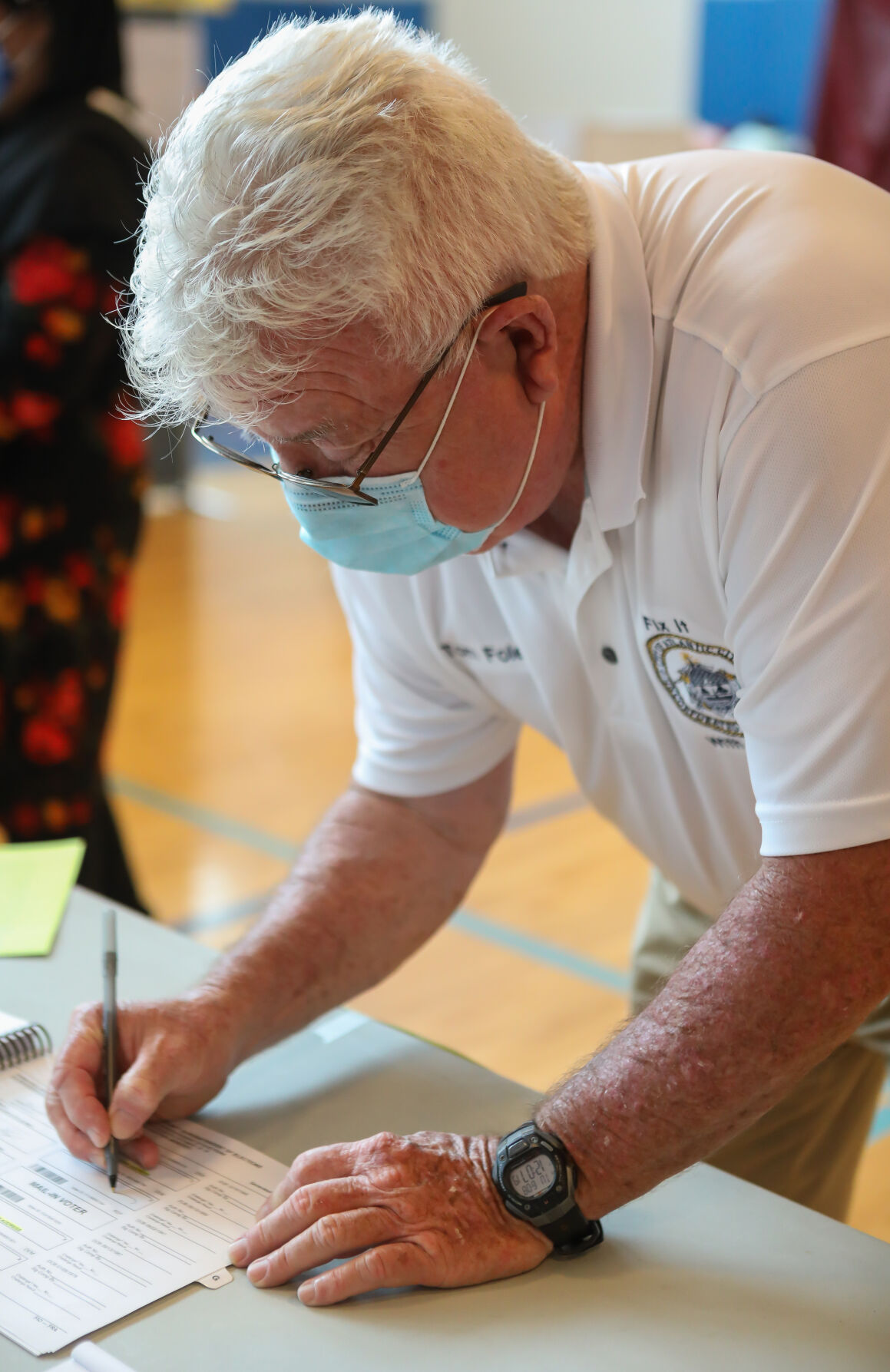 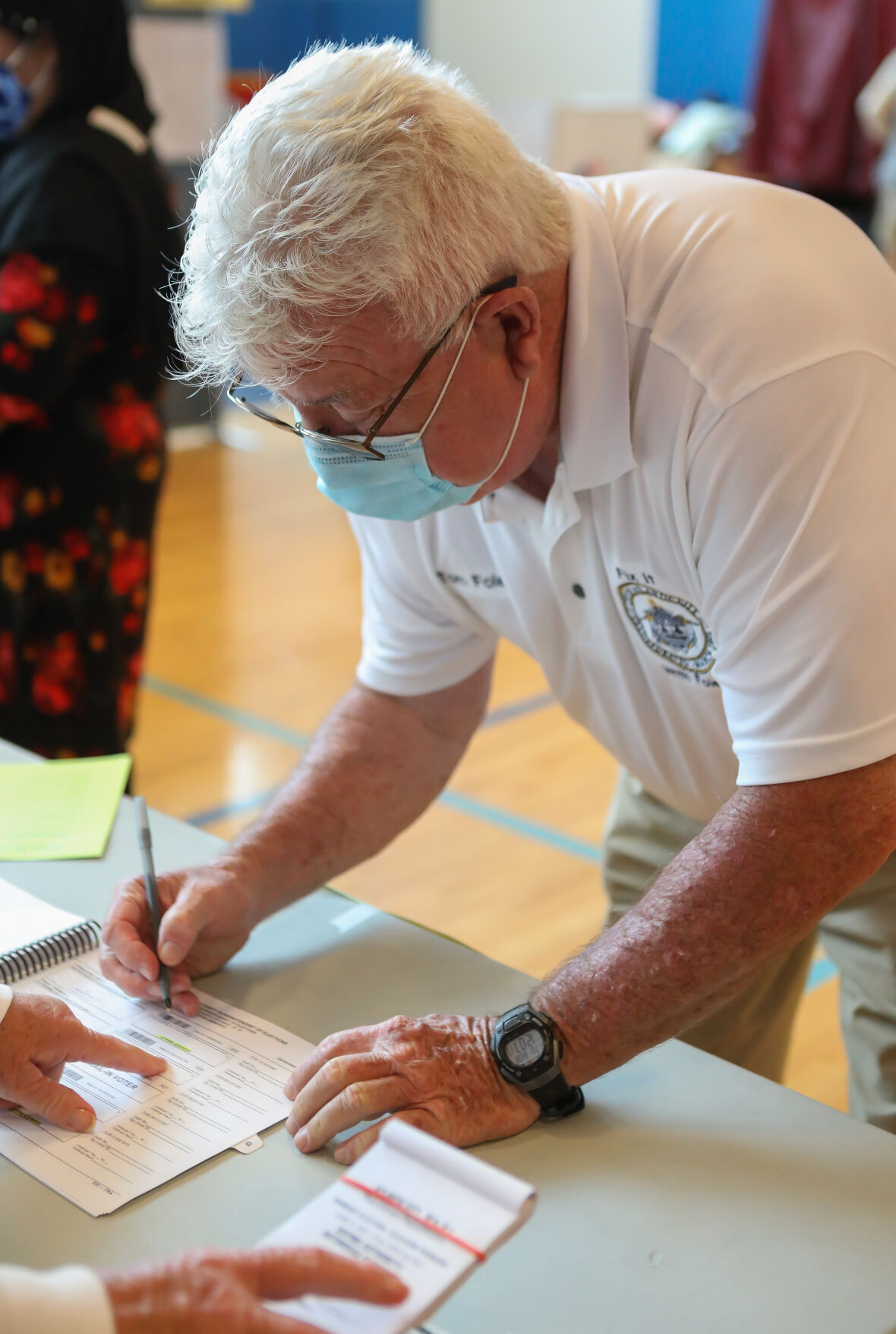 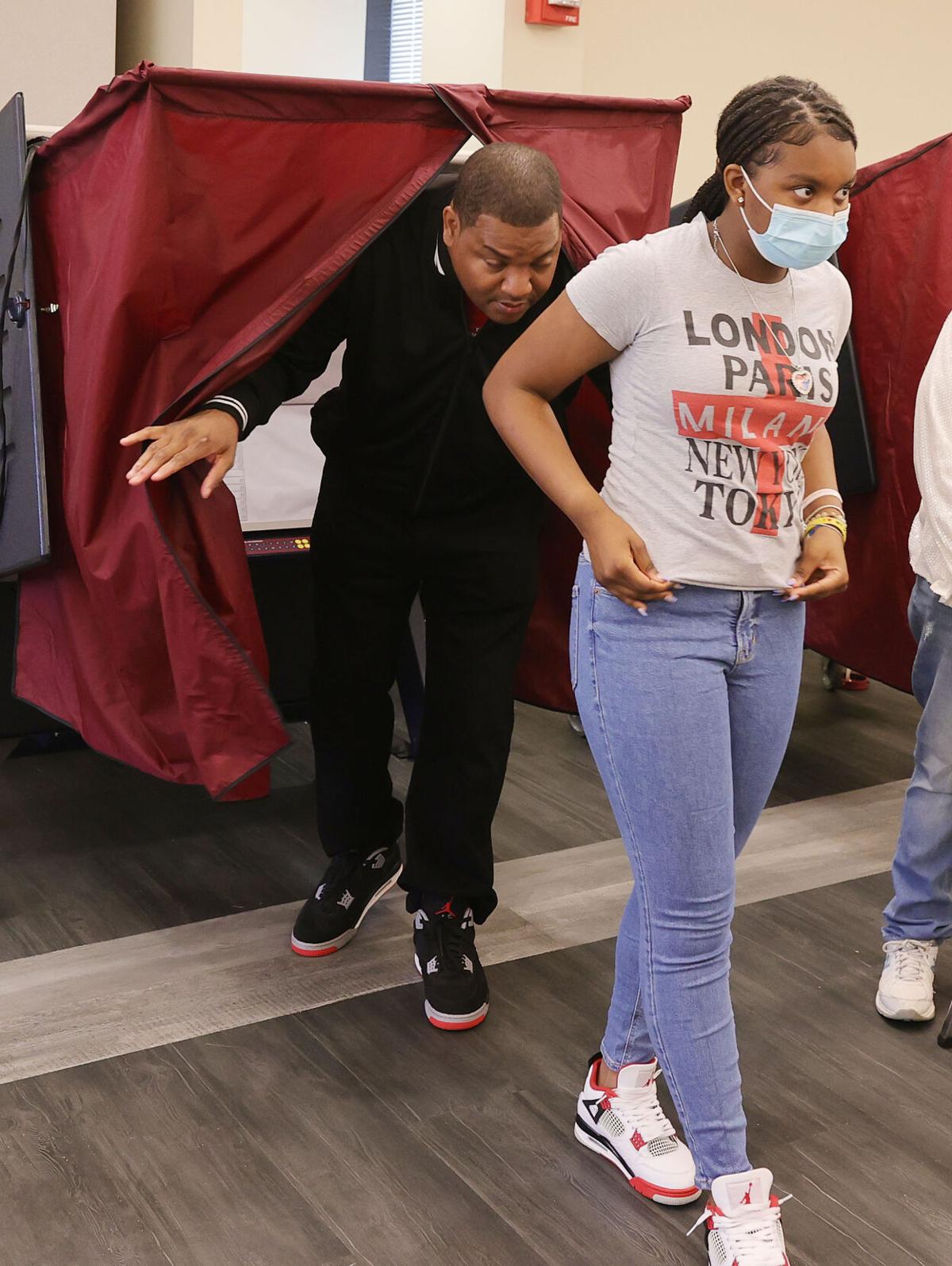 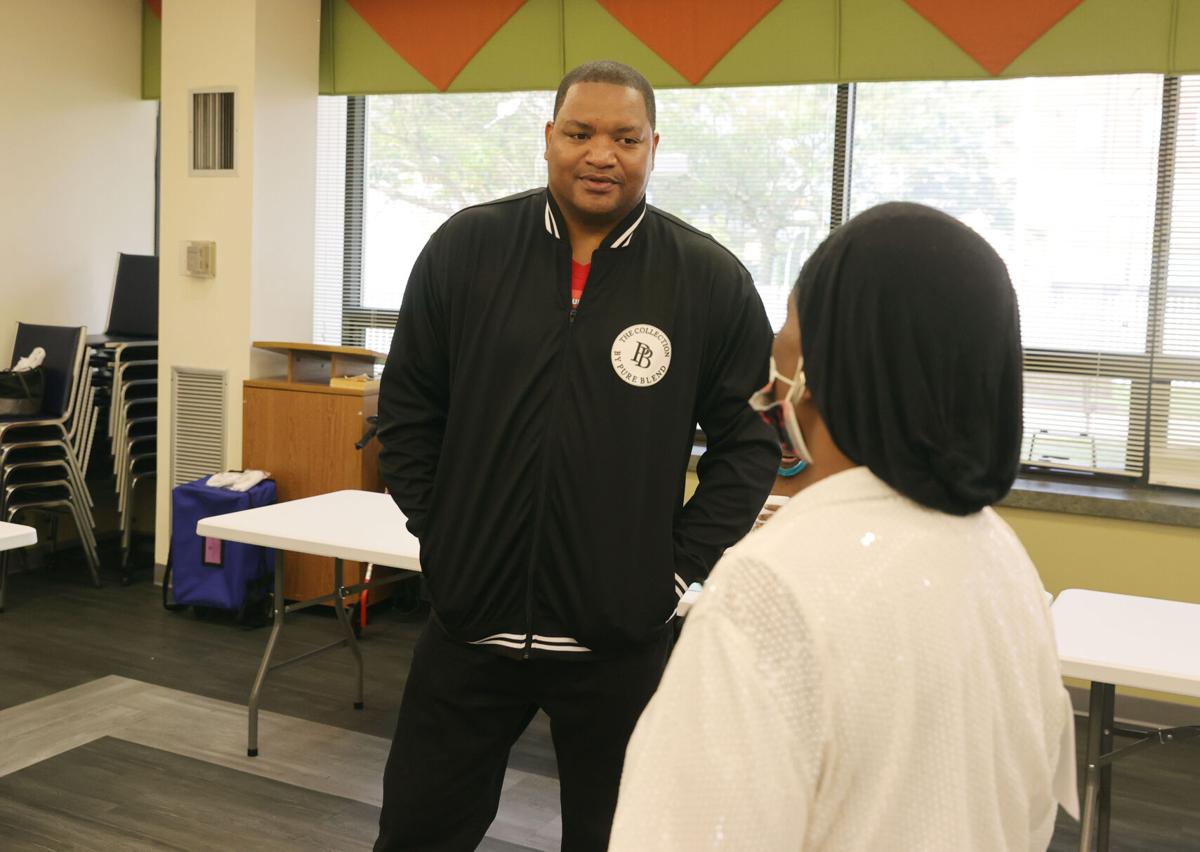 Atlantic City Mayor Marty Small Sr. talks with a poll worker June 8 at Community Haven in the city before he casts his vote in the primary election. 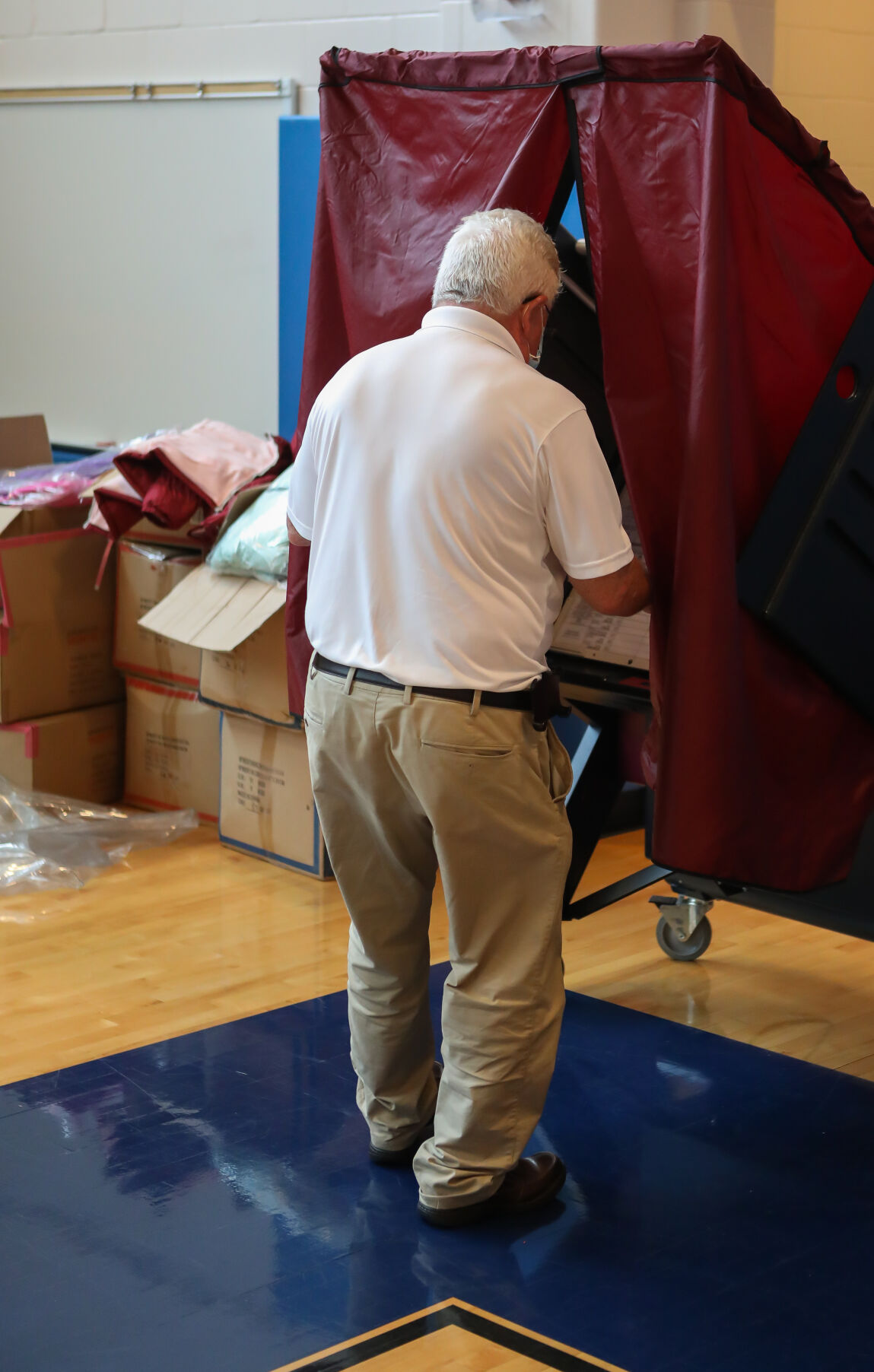 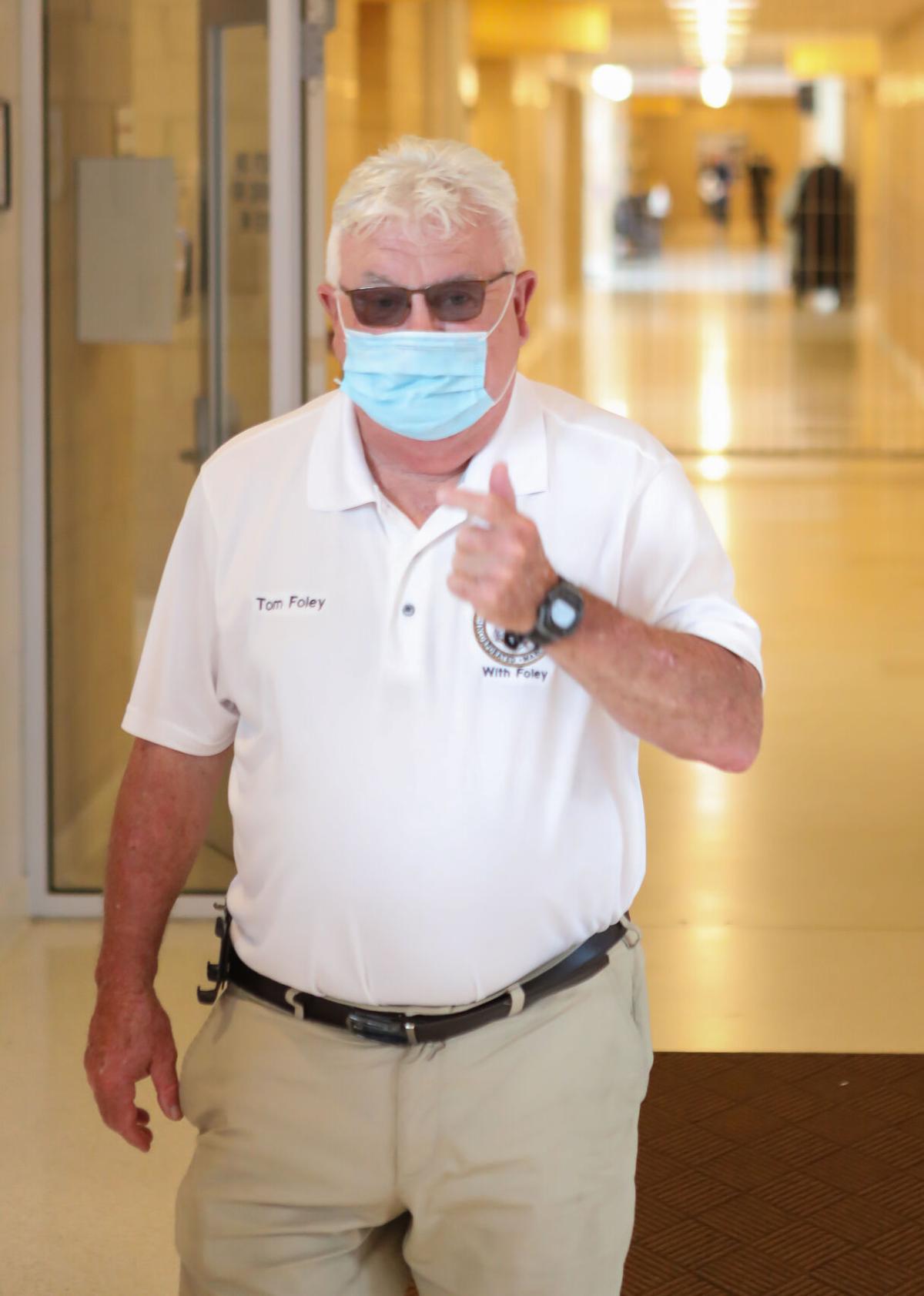 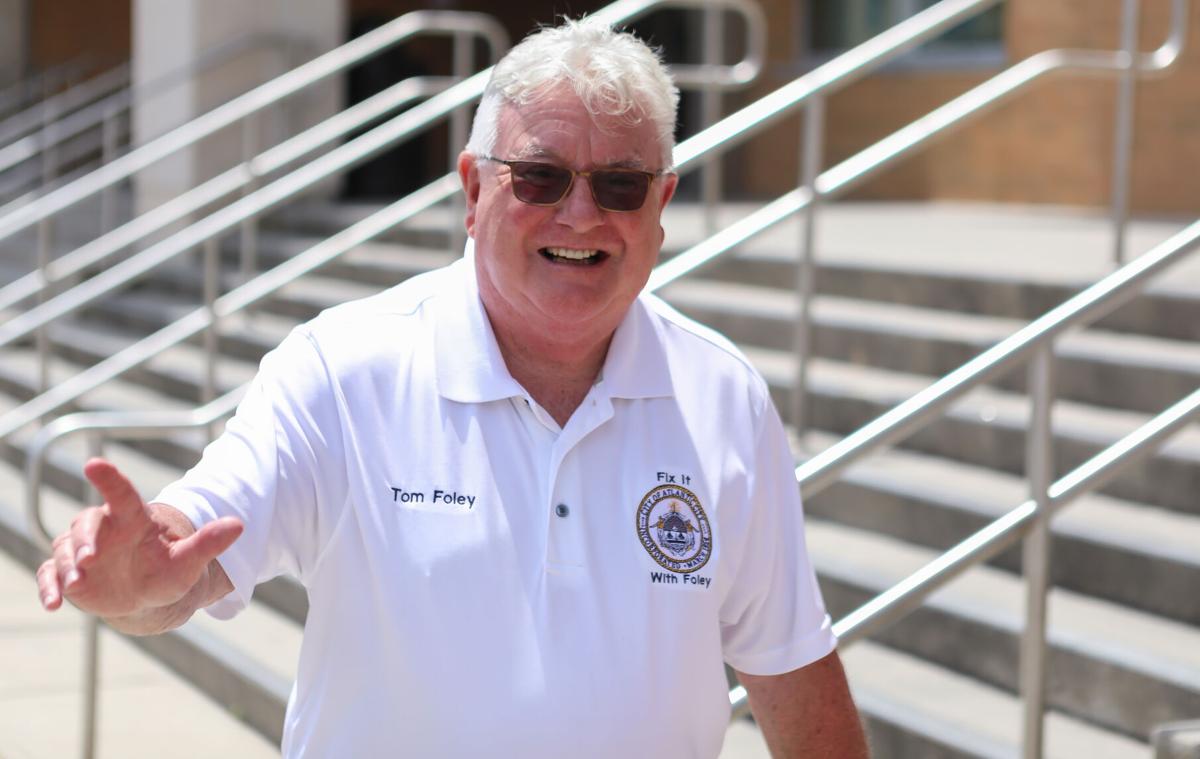 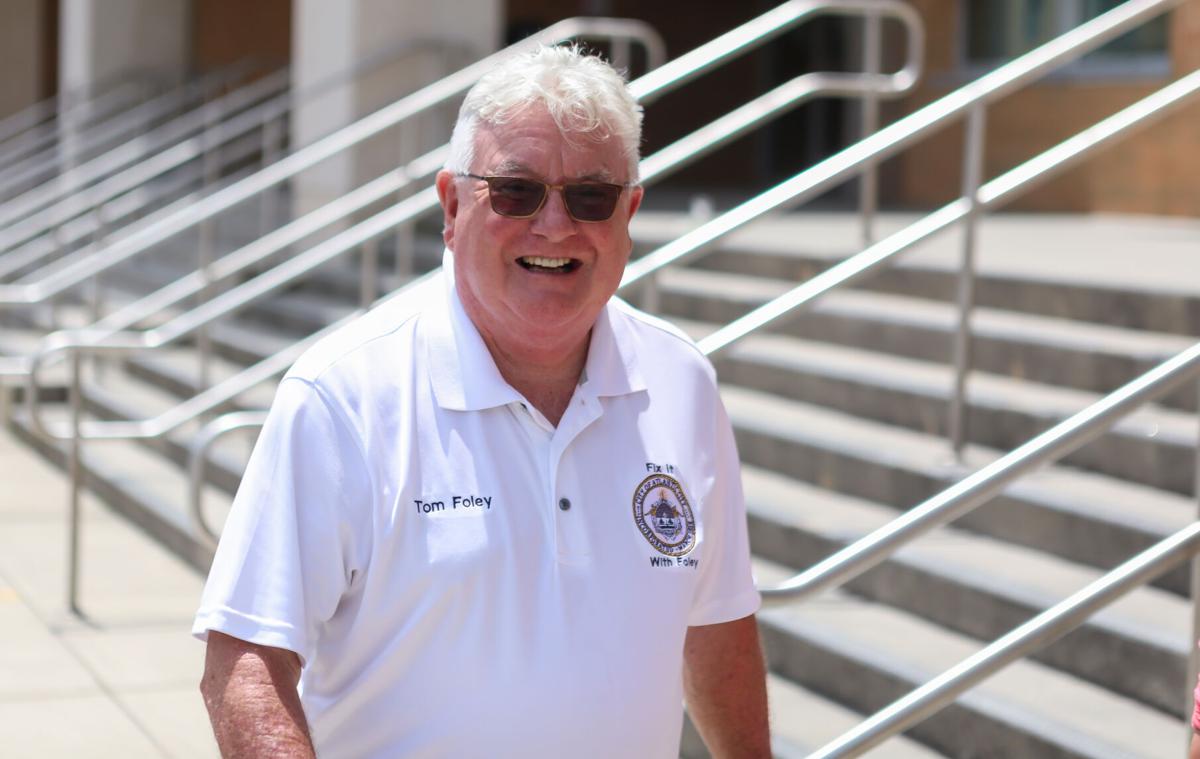 "We know the games they play, all the dirty stuff, but I think it's safe to say there's a new lead organization in town — Team Small!" a jubilant Small said. "And to the Callaway organization: It's over!" Small said, as he kissed his hand and threw it in the air to a cheering crowd of supporters at his campaign headquarters on Atlantic Avenue. Small's slate of at-large council candidates — Stephanie Marshall, George Tibbitt and Bruce E. Weekes — were also leading vote-getters over the Foley ticket as of 9:40 p.m.

With 18 of 21 districts in the city reporting, Small had won more than 80% of the votes at the polls — 1,520 to Foley's 361. All results are unofficial. The incumbent had also eked out a slight victory over Foley in mail-in votes counted Tuesday night, a significant victory considering Callaway's specialty is mail-in campaigns. Those votes were also still being counted.

Small will face Republican Tom Forkin, who is running unopposed in the primary, in the Nov. 2 general election. Forkin had collected 240 votes as of 9:50 p.m.

Small's ticket of candidates Marshall, Tibbitt and Weekes were the three leading vote-getters of seven Democratic candidates running for the three at-large council seats, all with more than 25% of the vote. Early results showed the Foley ticket candidates, Aaron Carrington, M. Suhel Ahmed and Shameeka Harvey each garnered 5% to 6%. Geoffrey Dorsey, the only Democrat running on his own and not associated with either mayoral candidate, had about 3%.

Foley cast his vote at noon Tuesday at the Richmond Avenue School in Atlantic City.

Foley could not be reached for comment following Small's victory announcement.

“As a campaign operator, it’s a relief,” said Robin Wallace, spokesperson for Small’s campaign. “My first emotion is relief, but overall I’m just really happy for Marty, the Small family and most important, the great city of Atlantic City.”

The race between Small, 46, and Foley, 71, has been shrouded in controversy, with both sides launching accusations and lawsuits against one another.

In March, Small and his wife, La'Quetta, filed a slander lawsuit against Foley, Callaway and five unnamed others for comments Callaway made on local radio programs, claiming the Smalls allowed their relative Kayan Frazier to sexually abuse a child in their home.

Frazier pleaded guilty in February to producing images of child pornography with a minor who was in his care.

Callaway is also Foley's campaign manager. His mail-in voter drives in the past have swung elections in his candidates' favor, but Callaway's methods have been scrutinized and criticized.

Small challenged Foley to disavow Callaway, who he said is "a convicted felon who served a jail sentence for accepting bribes during his term as an Atlantic City councilman and is notorious in Atlantic County for his dirty campaigning and voter suppression tactics."

Small has denied anything happened in his home and said Callaway’s statements were politically motivated.

On May 2, a physical altercation occurred between Small, Callaway and another political organizer. The organizer, Deon Garland, filed charges against Small for assault and property damage. A probable cause hearing on the matter has been scheduled for June 14 in Atlantic City Municipal Court.

Foley's support of former President Donald Trump and U.S. Rep. Jeff Van Drew, R-2nd, has also made him a target of ridicule by Small.

“The irony of this guy power walking on the Atlantic City Boardwalk with a MAGA hat, a MAGA flag on his home, Jeff Van Drew signs on his lawn, personal Christmas cards and autographed MAGA hats from Donald Trump, all while attending Trump rallies like the insurrection on Jan. 6, and now he wants to run for mayor as a Democrat?" Small said in March. "(It) is laughable."

In a civil action, Foley argued the Atlantic County clerk, by requiring messengers to make appointments to apply for vote-by-mail ballots for other voters, was disenfranchising voters and denying them their rights.

Small became interim mayor in 2019 after his predecessor, Frank Gilliam, resigned after pleading guilty to stealing more than $80,000 from a youth basketball charity.

Since then, he has had to fight to keep his seat, winning three elections in 2020 alone, defeating a change-of-government effort in May, securing a contested three-way primary battle in July and beating Forkin in the November election to secure a one-year unexpired term as mayor.

Following the win Tuesday night, Small, asked to reflect on his victory, used one of his most familiar responses.

“It’s a great day here in the city of Atlantic City. I feel great,” Small said.

ATLANTIC CITY — As the final mail-in and provisional ballots were being counted, Marty Small Sr. seemed to have secured the Democratic nominat…

MAYS LANDING — A pitch for a countywide municipal court system got a boost from the Judiciary Committee of the New Jersey Assembly, which unan…

MAYS LANDING — The Atlantic County Board of Elections counted the county’s 733 provisional ballots on Friday evening, and will certify the Jun…

When Jeff Van Drew opposed an infrastructure bill last week that included millions for his South Jersey district, the Democratic-turned-Republ…

ATLANTIC CITY — A woman who stopped to assist in a motor vehicle crash was struck and killed Wednesday night on Absecon Boulevard, police said.

She was not the only one. Dozens gathered Friday at Oscar E. McClinton Waterfront Park in the Northeast Inlet for a Young Entrepreneurs event …

Atlantic City Mayor Marty Small Sr., along with his wife, La’Quetta, and their son Marty Jr. and daughter Jada, not shown, cast their vote Tuesday at Community Haven during the primary election.

Democratic mayoral candidate Tom Foley gives the thumbs up after placing his vote for the Atlantic City Mayor. Atlantic City, NJ. June 8, 2021 (Kristian Gonyea, For The Press of Atlantic City)

Atlantic City Mayor Marty Small Sr. talks with a poll worker June 8 at Community Haven in the city before he casts his vote in the primary election.