An architect’s rendering shows a proposed new public safety building in Ocean City that would combine police and fire services at West Avenue and Fifth Street. 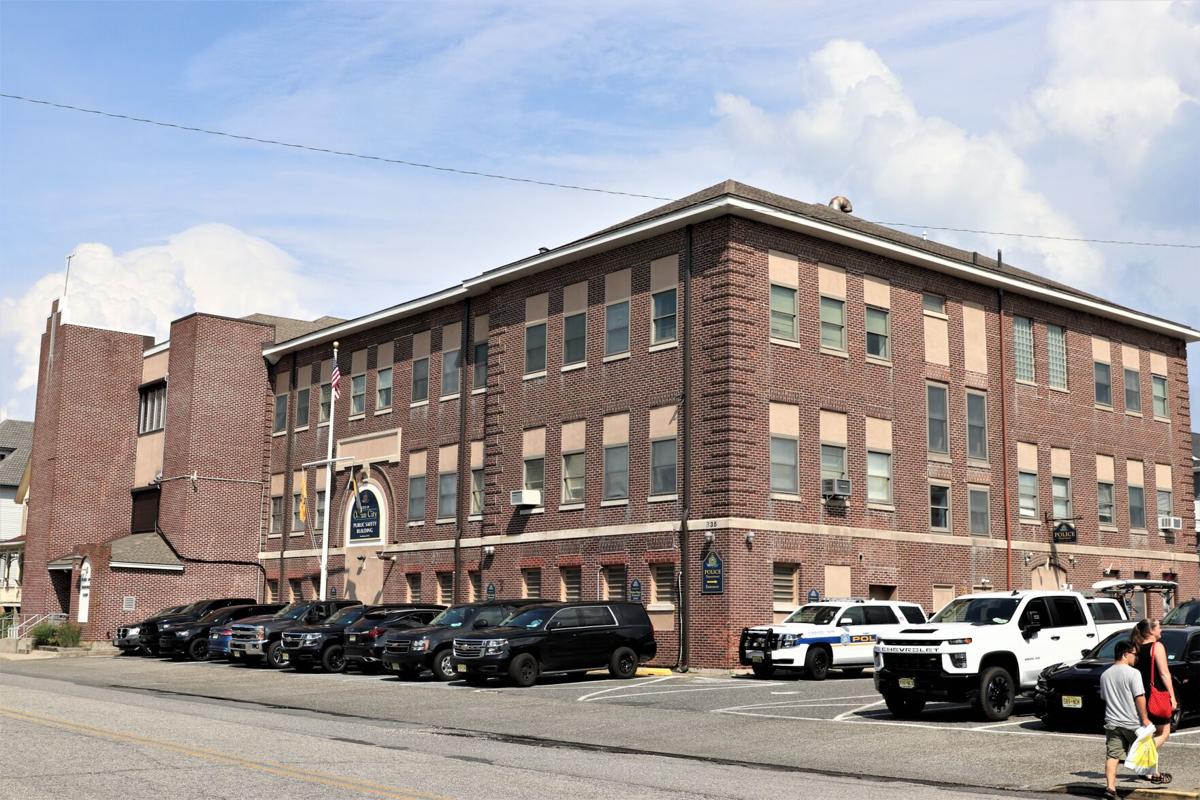 Ocean City’s public safety building, including the municipal court and the police department, is housed in a former school. The building is more than 100 years old. 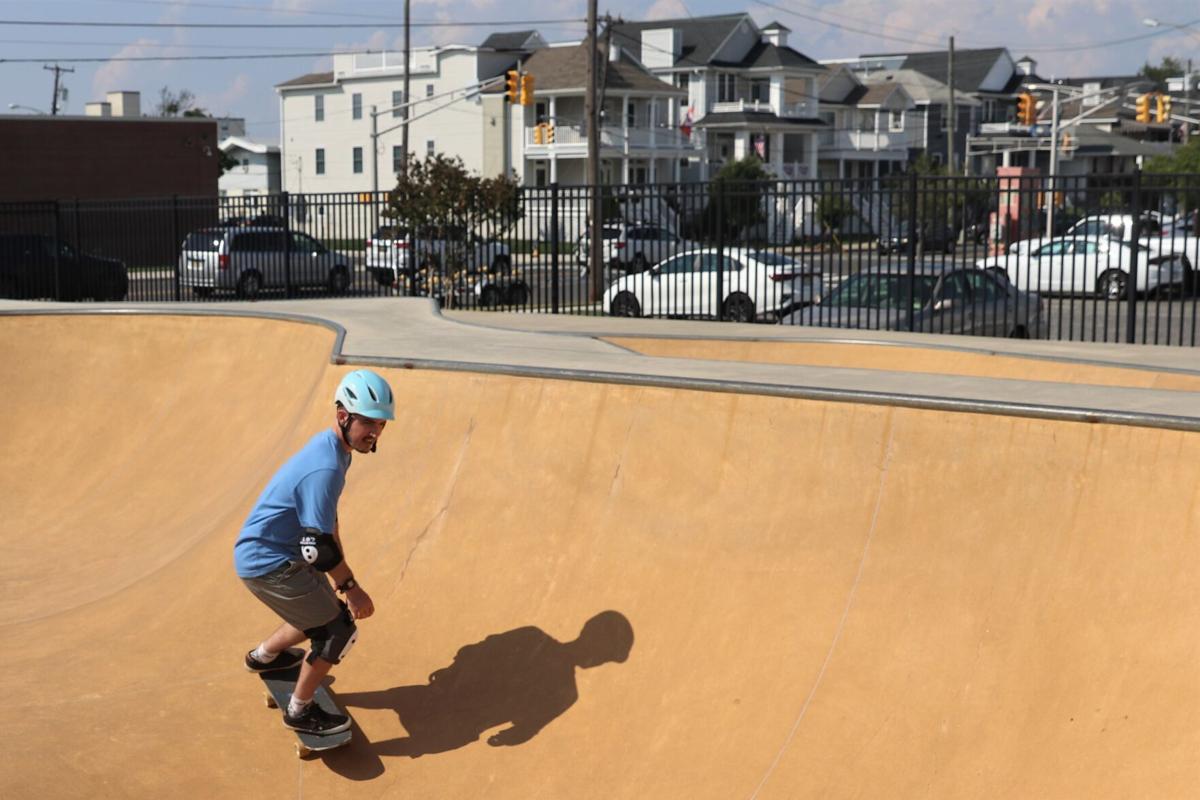 A skater enjoys the Ocean City Skate Park this week. Under a proposal to combine the police, courts and fire department headquarters, the park will be demolished and relocated behind the Ocean City Primary School. 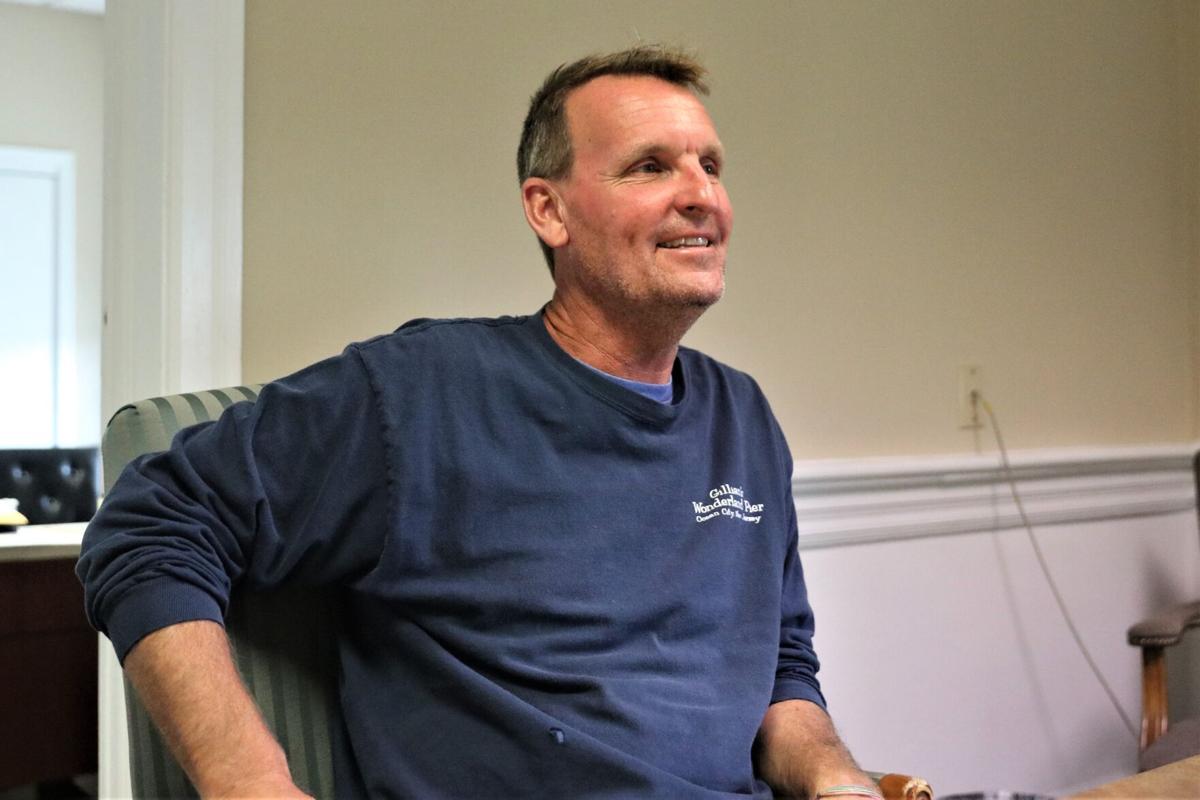 Ocean City Mayor Jay Gillian sees a combined public safety building as the most viable option. The proposal is currently estimated to cost $42 million, including construction costs and the expense to demolish the two existing buildings. 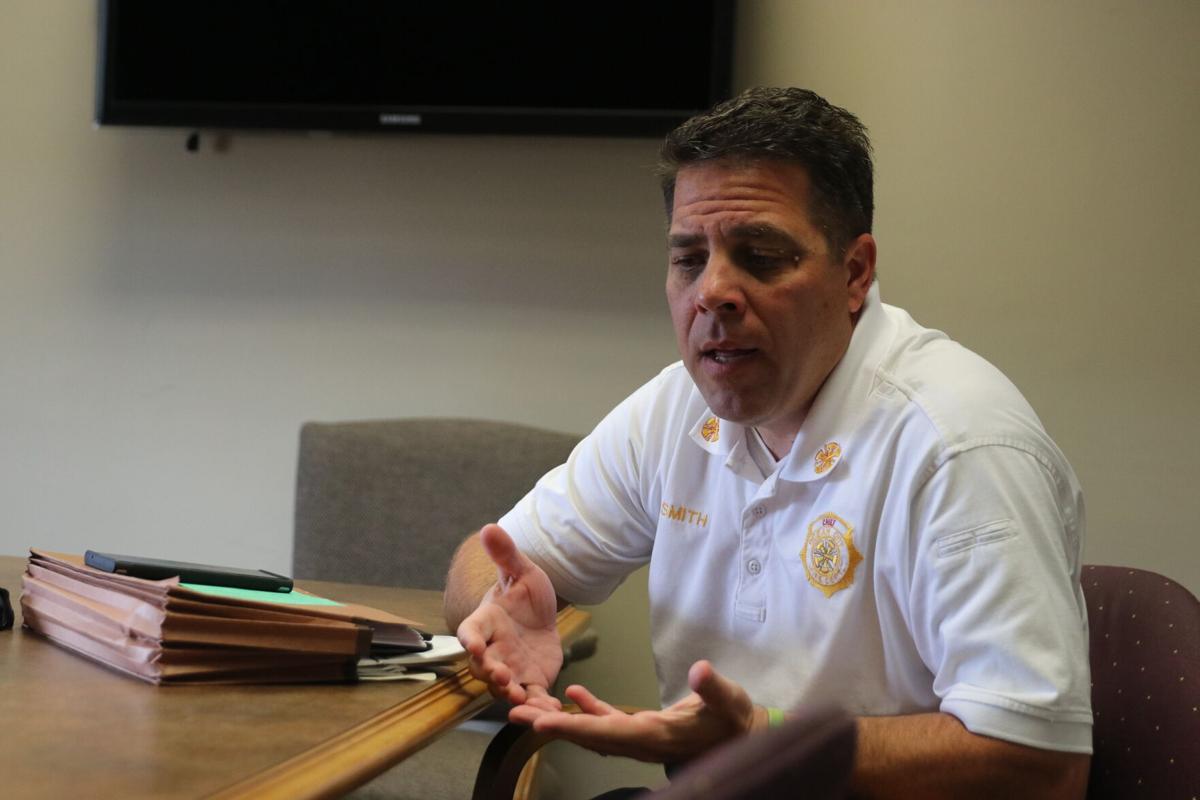 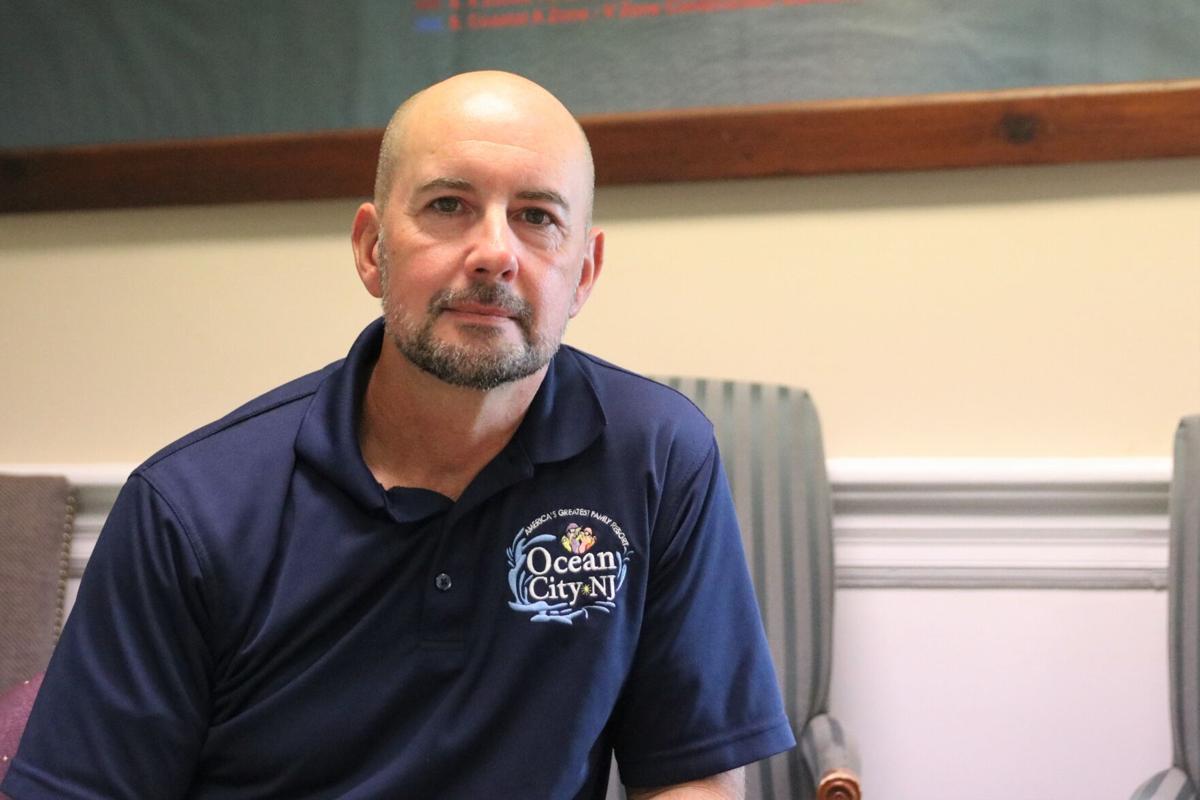 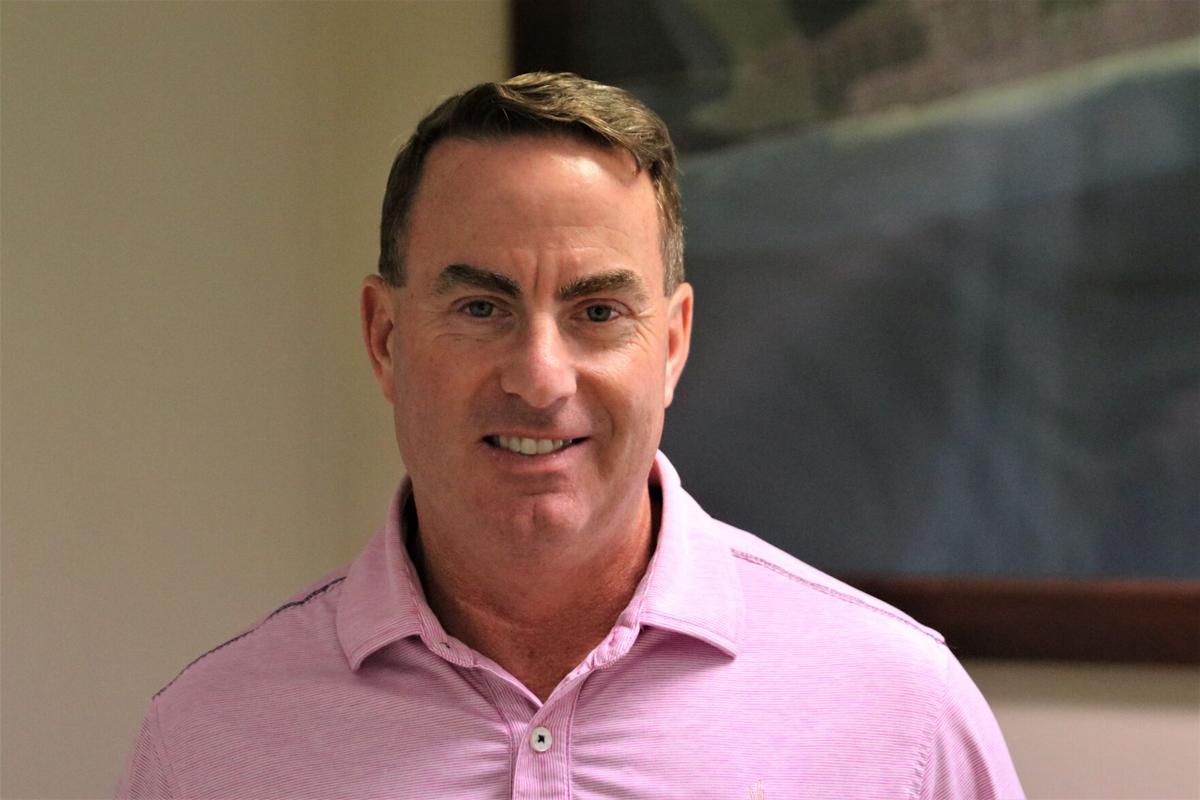 That’s the estimated price of a proposal to combine the city’s police and fire operations in a single building on West Avenue at Fifth Street.

In a recent interview, Gillian said the estimate covers everything — construction of a new building, demolition of the two existing headquarters, relocation of the city’s skate park, the costs to move in and more.

“That’s the complete, done-deal job,” Gillian said. The city can afford to do the work, and it needs to get done, Gillian said.

He hopes federal grants will cover much of the cost.

The city’s Police Department, emergency dispatch and courts share a former school building that is more than a century old. For more than a decade, city officials have wrestled with the best option for a new headquarters. In October, officials presented the plan for a combined building, describing it as the marquee project of a generation.

Not everyone is on board.

Resident Michael Hinchman, a former president of the local advocacy group Fairness in Taxes who unsuccessfully ran against Gillian in 2010, argues the proposal is too expensive and too big.

At a recent City Council meeting, he called on the city to put the proposal on the ballot. If the city pushes ahead with the plan, Hinchman said, he would launch a petition drive to force a referendum.

This week, Hinchman said the proposal does not have enough support on council to move forward, citing sources on the governing body. Asked who they were, he said, “I can’t tell you that.”

Hinchman agrees that the current public safety building at 821 Central Ave. needs to be replaced. But he said Gillian’s proposal is wasteful and overblown.

“We’re standing by, closely watching and if necessary we’ll move forward with a petition for a referendum,” Hinchman said.

“The can’s been kicked long enough,” Gillian said this week. He said a majority on council had supported the proposal but added that politics may change the landscape, with his seat and four seats on the seven-member governing body up for election next spring.

Gillian said he plans to run for reelection for what would be his fourth four-year term in office. He cited the long-term plans for the public safety building as one reason to run again, describing it as the last piece of the series of infrastructure improvements he launched, including road and drainage work, reconstruction of the city’s Boardwalk, dredging in the city’s lagoon and other large-scale projects.

So far, there are no other announced candidates. Widespread speculation in town is that Councilman Keith Hartzell will challenge him in the nonpartisan May election. That would mean Hartzell could not run for reelection to council.

Hartzell said he has not announced his candidacy but confirmed he is considering a run for mayor in 2022. He said he is talking to residents throughout town but does not bring up running for mayor.

“If someone asks me, I’m not going to lie to them,” Hartzell said Wednesday.

According to Prettyman, officials began to talk seriously about a new home for the Police Department in 2008. There are some issues with the existing building, such as a leaky façade, but he said the building remains structurally sound, if somewhat overcrowded.

“Our building now is adequate. We’re making it work,” he said. “We don’t have space for the 60 seasonal officers we hire each year. They basically get changed in the hallway.”

WATCH: Diver rescued off Cape May

The U.S. Coast Guard said it rescued a diver 46 miles off Cape May on Wednesday.

The Fire Department is also making things work at its much newer headquarters on West Avenue, set between the Ocean City Primary School and the Ocean City Tabernacle. That building was completed in 1983.

The current Fire Department has more gear and larger trucks than it did almost 40 years ago, and more duties. In the 1980s, Ocean City still had a volunteer ambulance corps, while the Fire Department is now the first responder to emergency medical calls.

“When I came on, we had six pieces of apparatus at fire headquarters. Now we have 12,” Smith said.

According to Donato, expanding the existing building is not a viable option. If the city spends more than half the value of the fire headquarters — about $750,000 — it would have to meet current flood elevation standards.

“Just because we’re a government doesn’t make us immune to those rules,” Donato said. As a critical public safety facility, he said, the rules are more stringent. New residential construction has to be built above the flooding level of a 100-year storm, meaning a storm that has a 1% chance of occurring in a given year.

Stressing there is no risk to the county taxpayer, the Atlantic County Improvement Authority…

A critical facility would need to be ready for a 500-year storm, Donato said, adding another two feet to the required flood elevation of the building.

On Tuesday, and at previous public presentations, Donato said the city’s long-term debt service has been carefully managed to allow the project to move forward with a minimal impact on most taxpayers.

Donato said the city has looked at multiple options, including building a new Police Department in the parking lot between City Hall and the existing building and placing the project at 16th Street and Simpson Avenue, where the city has acquired a former car dealership through condemnation, with plans to use it as open space.

As envisioned, both the fire headquarters and the public safety building would be demolished for additional parking. The new building would require moving the popular skate park and the existing parking lot to the recreation fields behind the Primary School.

The skate park would need to be rebuilt at the new location, presenting another roadblock for the proposal. When the park opened in 2015, the city put $250,000 into the cost, with Cape May County covering $500,000 through its open space fund.

City officials believe the county will not allow the existing park to be demolished until the new one is in place, which could take a year.

The construction of the combined building itself could take about 18 months.

Gillian hopes to have building plans finalized in early fall. He said a lot of federal infrastructure grant money is likely to become available, and said the city has been preparing for the project, one he says will improve public safety.

“This seems to tick all the boxes,” Smith said.

The cost has been climbing. For years, the city had $17.5 million in its capital plan for a public safety building, even as various options were still on the table. In October, the estimate was $35 million. Gillian said the current estimate, now $42 million, includes all costs, down to moving over the furniture, and he hopes to shave down that estimate if COVID-19-inflated costs for materials drop in the coming years.

“You build for what you need now,” said Hinchman in a telephone interview. He said there is no way to predict the needs of the future.

He believes the city could add the fire headquarters and build a new police station and court without planning such a large-scale building.

“There’s no reason to demolish a perfectly adequate 40-year-old firehouse to build a colossus,” he said.

Gillian remains committed to the plan, saying it makes sense for the police and firefighters to share a building.

“Right now we have a facility that needs to be built so our police and fire can do their jobs into the future,” Gillian said. “For Ocean City taxpayers, this is the best option in our opinion (after) doing all of our homework.”

Atlantic County residents can once again recycle their yogurt cups, and more.

Lindenwold man charged after boat runs aground in Ocean City

OCEAN CITY — A Camden County man faces charges of boating while intoxicated after grounding a vessel on the beach near Morningside Road, police said.

An architect’s rendering shows a proposed new public safety building in Ocean City that would combine police and fire services at West Avenue and Fifth Street.

Ocean City’s public safety building, including the municipal court and the police department, is housed in a former school. The building is more than 100 years old.

A skater enjoys the Ocean City Skate Park this week. Under a proposal to combine the police, courts and fire department headquarters, the park will be demolished and relocated behind the Ocean City Primary School.

Ocean City Mayor Jay Gillian sees a combined public safety building as the most viable option. The proposal is currently estimated to cost $42 million, including construction costs and the expense to demolish the two existing buildings.