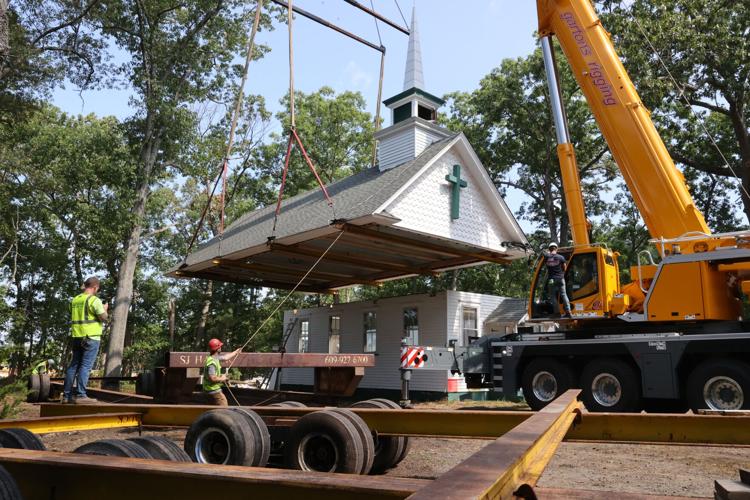 The Pomona Union Protestant Church, constructed in the early 20th century, is being moved from its current location on Genoa Avenue to Smithville. 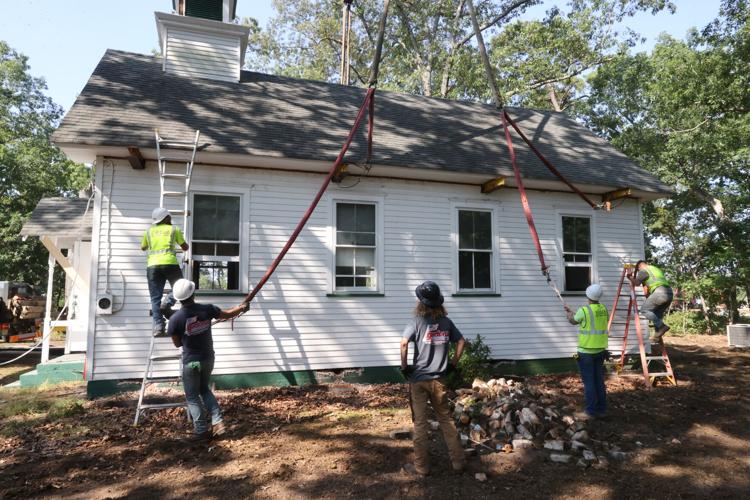 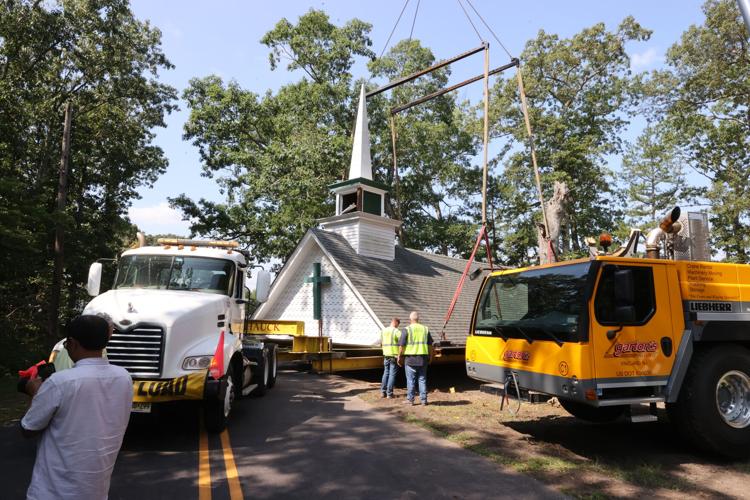 Pomona Union Protestant Church was taken apart piece by piece and will be reconstructed at its new home in Smithville. 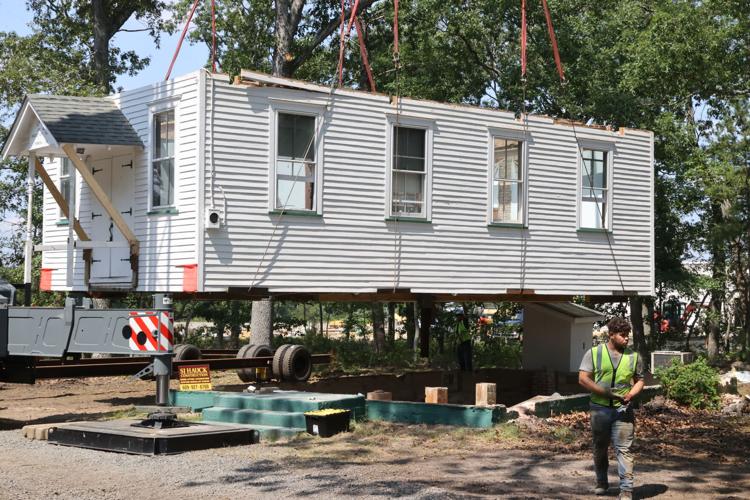 Pomona Union Protestant Church is lifted off its foundation. 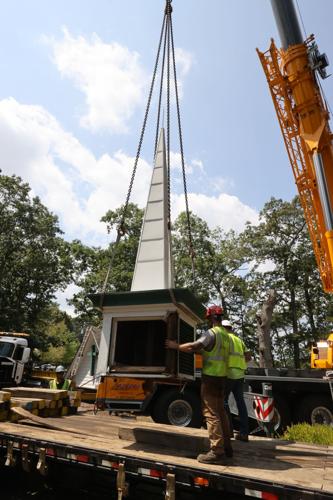 The steeple was removed from the top of the church for ease in moving through the streets of Galloway Township. 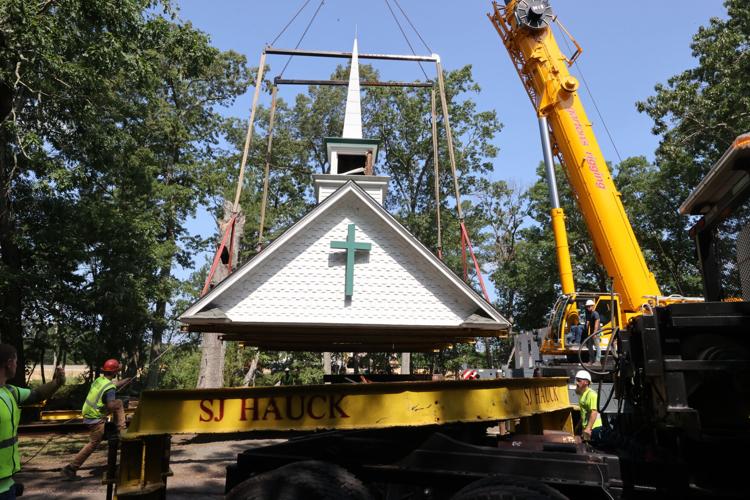 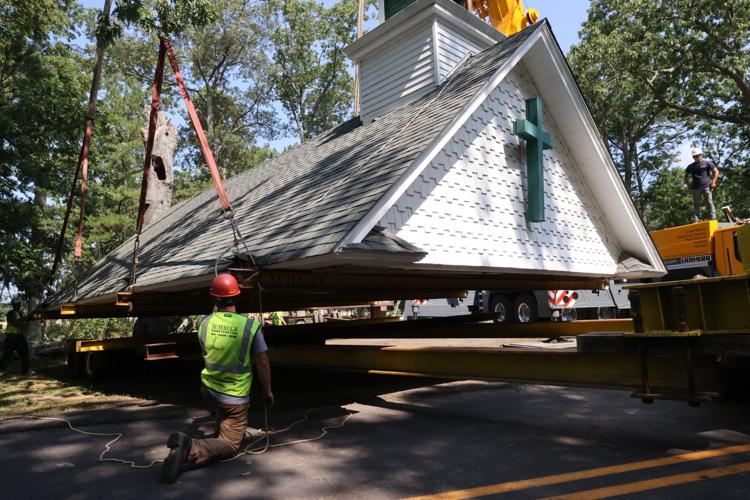 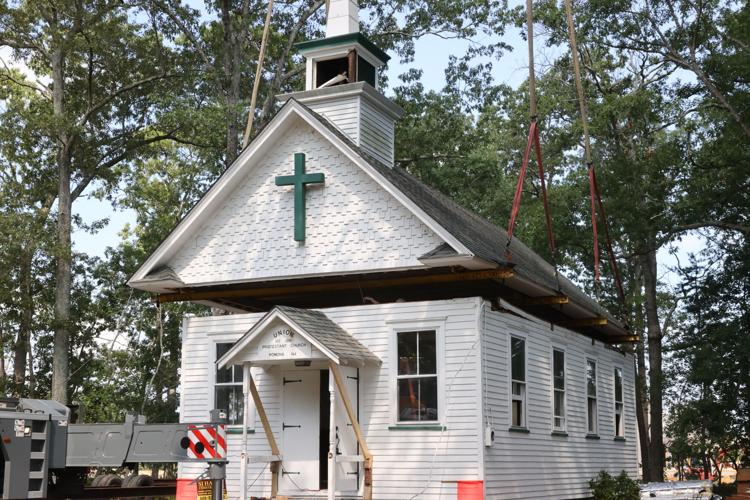 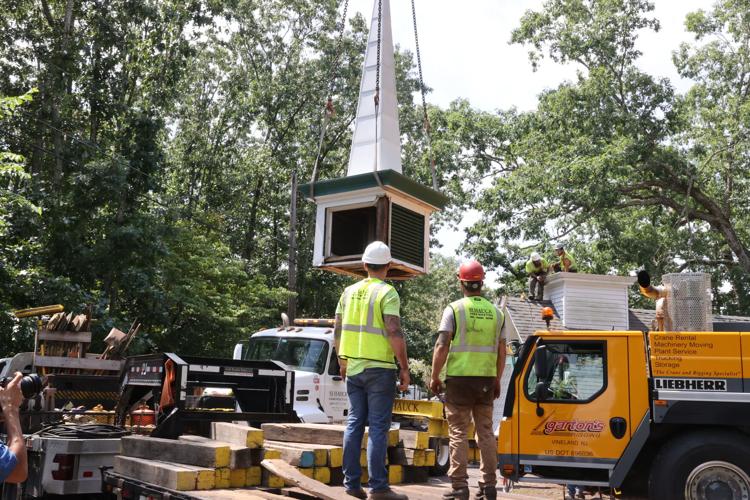 GALLOWAY TOWNSHIP – A church can lift up a local community. In Pomona, the community is lifting up a local church.

The Pomona Union Protestant Church was moved from its longtime home at the corner of Genoa Avenue and the White Horse Pike on Thursday and brought to a new location in Smithville.

A construction crew was at the property early Thursday morning and would take apart the church piece by piece and reconstruct it on its new foundation, which is adjacent to the Smithville Bakery.

Steve Hauck, the owner of SJ Hauck Construction, led work on the move. He reflected on the church’s long history in the town and noted how important it would be to keep it intact for posterity.

“Anyone who’s local knows of this church and it would be devastating to get torn down,” Hauck said. “So it’s phenomenal what we’re able to do, it’s phenomenal that Historic Smithville is taking it.”

“Too often, we’re throwing these types of buildings away and that’s going to have to stop,” Hauck added.

After preliminary work, the first major operation was to lift the roof with a crane that towered above the property. Some parts of the church, such as the steeple, needed to be cut and reattached later so it could fit down some of the township’s narrow streets.

Pat Scamoffa, the treasurer and a trustee for Pomona Union Protestant, came down from Somers Point to witness the move. She put together a book documenting the history of the church and the role it played in so many lives in the town.

Scamoffa, 79, said she had gotten married at Pomona Union Protestant and her three children were baptized at the church.

“A lot of people that came would say ‘I came here for Sunday school’ somebody else would come one week and say ‘this is where I was baptized,’ ‘this is where my mother was married,’ all those events,” said Scamoffa’s sister Kathy Falciano who was also at the Genoa Avenue site.

The Pomona Union congregation was established in 1890 as an interdenominational place of worship. Harold Booth, Scamoffa’s grandfather, owned much of the open land from Genoa to Mannheim Avenue and donated the lot where the church stood. His brother, Arthur Booth, led efforts to help build the church and gave the building its historic design that the community was eager to preserve.

Charles Bushar, a possessor of the Historic Towne of Smithville company which will take Pomona Union in, said he was glad to be able to house the church.

“There’s a great deal of pride in the church and the members who have had it for many, many years,” Bushar said.

Mayor Anthony Coppola, who is also another owner of The Historic Towne of Smithville, said that the company had a plethora of experience transplanting buildings from other parts of South Jersey, having preserved buildings such as the Grist Mill.

“We think it’s a really cool piece of Galloway history,” Coppola said of the church. “We’re honored to have it here.”

Real estate broker Drew Fishman helped organize the deal. He said there were first discussions about moving the church four years ago and that the parties involved began seriously dealing with the logistics of the transfer two years ago. Watching over the church as the construction crew prepared the transfer, Fishman said having the church nearby its original location by placing it in Smithville was an ideal option for its future. The land the church was on was sold to Nantucket at Galloway, which owns some of the surrounding land.

“Smithville was something (the church trustees) figured was a nice option, because they figured this way any of the family members would still be able to visit,” Fishman said. “And it’s being put in a prominent place, so it at least gives them a positive of what comes out of everything.”

David Booth, another of Harold Booth’s grandchildren, came over with his family from Egg Harbor Township to watch the transfer. He recalled how his father’s cousin used to teach Sunday school at Pomona Union Protestant and how his family had been involved as trustees and caretakers for the church. He said he was grateful the building would be preserved but did call the moment “bittersweet.”

Passersby on Genoa Avenue on Thursday were impressed by the operation. David Sykes, a Linwood resident who regularly drives down Genoa Avenue, stopped to talk with developers and church trustees to learn about the church’s history.

Frank Mohr, who lived in Galloway, had himself converted an old church into a house, which he now rents. He said he was impressed how intact the church was since its construction in the early 20th century and wanted to come down to Genoa Avenue to watch the transfer.

“To let it go, you kind of lose where you came from and what people used to do back then,” Mohr said.

Scamoffa said that attendance had declined at the church in recent years and a longtime minister there had moved out of the area. There were only three services being held each year by 2019 and then the COVID-19 pandemic ended worship there entirely. As it had been a target of recent vandals, she wanted to find someplace where it could be kept safely preserved.

Scamoffa said she had a longstanding business relationship with the owners of The Historic Towne of Smithville and was confident in their ability to take over her role as caretaker of the Galloway landmark. Speaking during Thursday afternoon after the caravan of church pieces had just set off for Smithville, she reflected on the day and the history of the church.

“I’m going to feel relief that everything went safely,” Scamoffa said. “At peace.”

ATLANTIC CITY — Bill Butler, who is homeless, was awake at 7 a.m. on Monday when he and about 20 others were abruptly visited by city official…

GALLOWAY TOWNSHIP — Plans to build an Amazon delivery facility in the township appear to have been shelved, dampening hopes of bringing the on…

Thousands turn out to see Phish on Atlantic City beach

New Jersey Superior Court Judge Michael Blee has ordered the state to make an immediate payment of $2.36 million to Atlantic County, and more …

AC Airport will be OK, regardless of Spirit - JetBlue deal fallout, analysts say

If a proposed merger between low-cost Spirit Airlines and the pricier JetBlue Airways happens, service at Atlantic City International Airport …

The Pomona Union Protestant Church, constructed in the early 20th century, is being moved from its current location on Genoa Avenue to Smithville.

Pomona Union Protestant Church was taken apart piece by piece and will be reconstructed at its new home in Smithville.

Pomona Union Protestant Church is lifted off its foundation.

The steeple was removed from the top of the church for ease in moving through the streets of Galloway Township.