From the Capitol to South Jersey, extremist groups remain threat
5 comments
Share this
{{featured_button_text}}
1 of 2

FILE - In this Sept. 7, 2020, file photo, a protester carries a Proud Boys banner, a right-wing group, while other members start to unfurl a large U.S. flag in front of the Oregon State Capitol in Salem, Ore. In its annual report set to be released Monday, Feb. 1, 2021, the Southern Poverty Law Center said it identified 838 active hate groups operating across the U.S. in 2020. (AP Photo/Andrew Selsky, File) 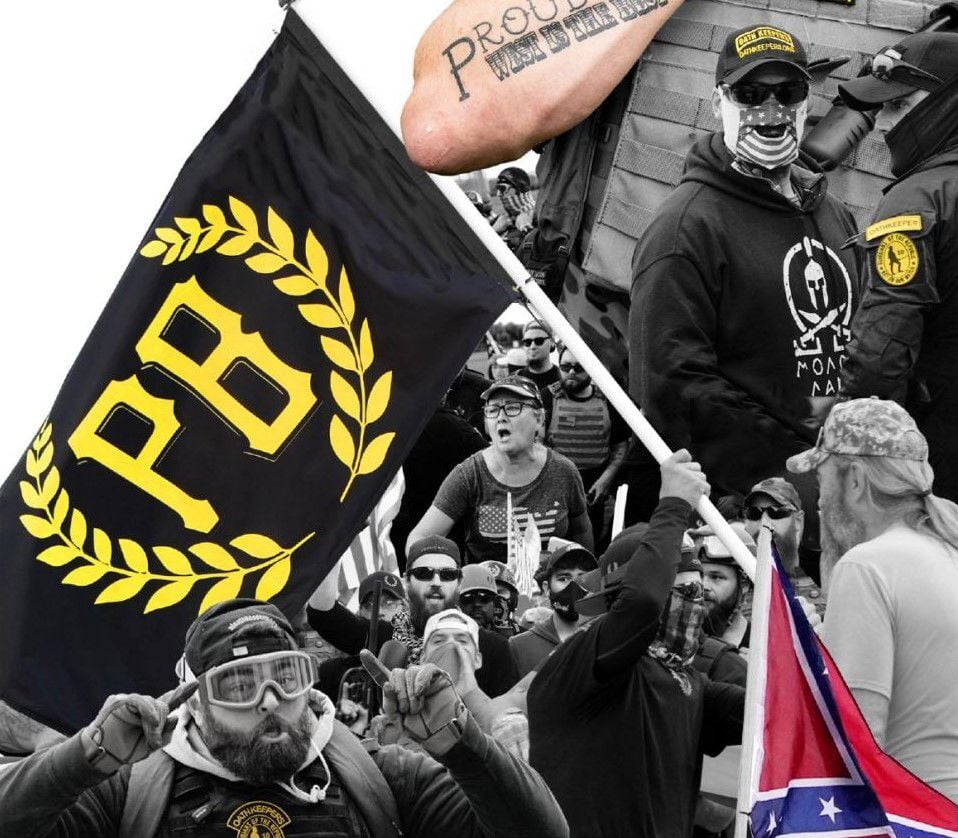 When Harry Furman began his teaching career at Vineland High School in 1972, a student in his homeroom identified himself as a member of the Ku Klux Klan and the Nazi Party.

Furman, the son of Holocaust survivors, responded to this in a way most probably wouldn’t.

The 21-year-old, now 70, went out of his way to strike up conversations with the student to learn more about him, sometimes offering to drive him home from school to continue those conversations.

“I’m not afraid to talk about those kinds of things,” said Furman, who is now an attorney and part-time lecturer at Rutgers University. “Part of that, I think, comes from a belief that dialogue is important, regardless of who the person is that I’m speaking with. When I ran my classrooms, and still even with the university, we engaged in civil discussions about controversial issues.”

Organizations like the Southern Poverty Law Center and the Anti-Defamation League have worked for decades to eradicate the presence of hate groups across the nation. Despite this, their numbers have shown no signs of slowing any time soon. In 2000, the SPLC tracked 599 hate groups across the country. Since then, that number has swelled above 1,000 in four separate years and gone below 800 just three times.

Such groups once again came into the forefront of national discussion after the Jan. 6 riot at the Capitol in Washington, D.C.

Furman, who’s also a member of the South Jersey Holocaust Coalition, has noticed more of an openness with these groups in the media. He attributed this to the public no longer calling out extreme ideals like it used to.

“We can all speculate as to why that has happened, but that calling out has got to occur.”

ADL Philadelphia Regional Director Shira Goodman said if this kind of thinking is simply overlooked or not addressed, the escalation to violence is inevitable. The group has a concept it calls the “pyramid of hate,” which begins at the bottom with biased thinking before evolving into voicing that bias and then eventually acting violently on that bias.

“The idea is that if you normalize hate and bias at the lower levels, then it doesn’t get so hard for it to escalate,” Goodman said. “When something starts escalating, you’ve already normalized it so much (to think), ‘Oh, maybe it’s not so bad,’ and you just create an environment where things can escalate.”

Among the sights of the day Jan. 6 were a number of patches bearing the name Oath Keepers. A 2019 report from the SPLC identifies the Oath Keepers as an anti-government group with ties to New Jersey.

Anti-government groups, according to the SPLC, are “opposed to the ‘New World Order,’ engage in groundless conspiracy theorizing, or advocate or adhere to extreme anti-government doctrines.”

The SPLC recognized 16 hate groups in New Jersey in its 2020 annual count, including the Atlantic City-based AC Skins, a racist skinhead group.

Racist skinheads once formed the most violent-minded element of the white supremacist movement, according to the SPLC. Most prominent in the 1980s and 1990s, the classic skinhead look included a shaved head, black Doc Martens boots, jeans with suspenders and racist tattoos.

Though the center’s 2020 report does not mention the Oath Keepers — a number of members of which were arrested in the Capitol riot — the 2019 report listed chapters in Bergen and Cape May counties. A website for the Cape May chapter mentioned a meeting date Jan. 21 at the Old Court House in the county, but county officials confirmed no such meeting was actually scheduled.

In total, the SPLC identified in its 2020 report 566 anti-government groups and 838 hate groups across the nation. Those numbers were actually a decrease from 2019, when they stood at 612 and and 940, respectively. Still, Susan Corke, director of the SPLC’s Intelligence Project, said the threat of violence from these groups is as high as ever.

“That’s because technology and the pandemic in the last year have changed how hate groups operate,” Corke said late last month during a livestream of the annual report. “They now have the tools to disseminate their ideas beyond their members, beyond geography and shift tactics and platforms to avoid detection.”

On its interactive Hate, Extremism, Antisemitism, Terrorism (H.E.A.T.) Map, the ADL indicated a number of such flyers were reported in South Jersey. One instance was on Aug. 7, when a flyer reading “Black Crimes Matter” was spotted in Atlantic City. It was attributed to the New Jersey European Heritage Association, a white nationalist group. That same group was reported July 25 for distributing in Cape May flyers reading, “Mass immigration is white genocide.” 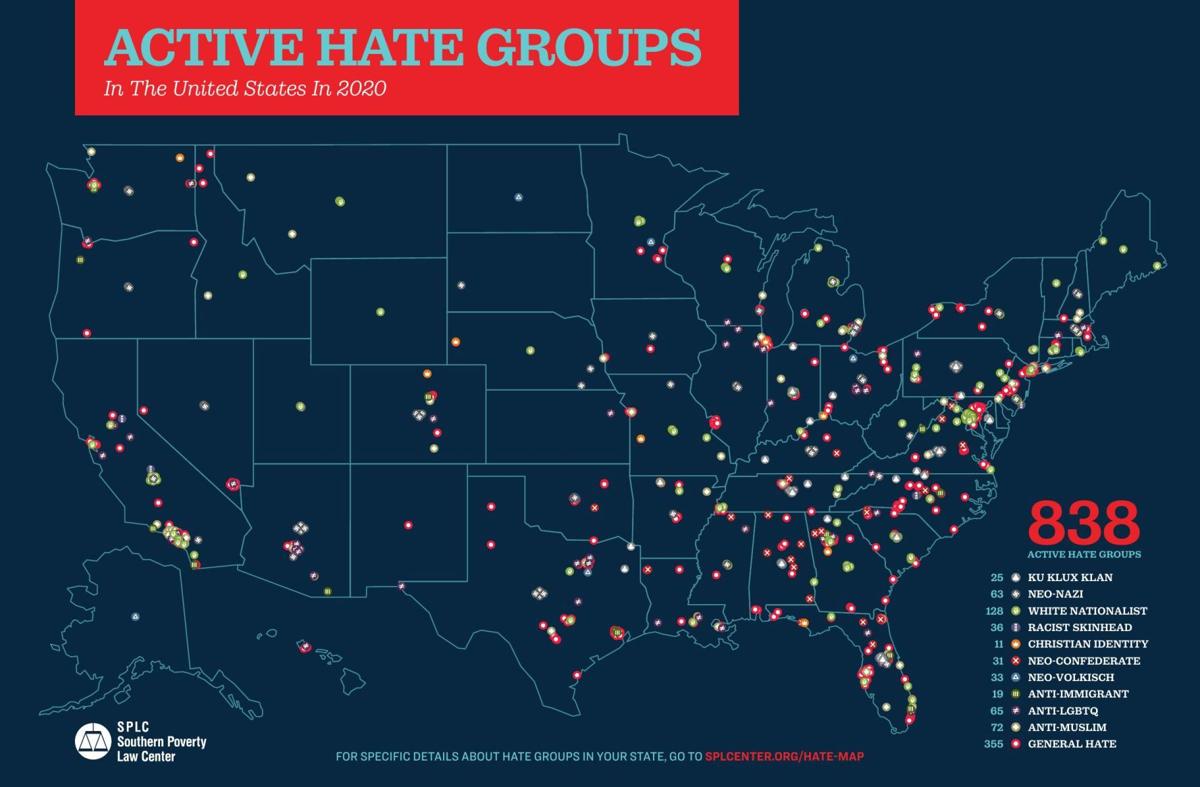 Furman has thought about how this kind of extremism continues to manifest, and he believes it is from those people fearing for the future of American culture. Because they’re unhappy with the direction in which the country is headed, he said, they look to place blame on others who, most of the time, don’t look or think like them.

The solution, he believes, could start in the classroom. Because these people often only hang out with others who hold the same beliefs, they rarely get the opportunity to have a constructive conversation with the opposition. That discourse, according to Furman, should be part of a school curriculum.

Goodman also feels the calling out has to occur within a community. She cited an incident at an LGBTQ center in Reading, Pennsylvania, over the summer. Shortly after the death of George Floyd in Minneapolis, the white supremacist group Patriot Front left flyers in front of the center. Various agencies, including nonprofits, businesses and churches, released a joint statement to say Patriot Front does not represent the state. A virtual town hall was held to discuss the incident. The incident scared many in the community, as tensions were still high in the immediate aftermath of Floyd’s killing.

“They felt so supported,” Goodman said of the state’s LGBTQ community. “The goal of the flyer was thwarted because the goal was to isolate, to make you feel unwanted (and) to make you feel alone.

“I think if you can counter that by people coming together, speaking out together and being supportive, I think that’s a way to kind of counteract the intent of the group that’s doing the flyering.”

US rejoins the Paris Agreement

How your lawmakers voted last week

WASHINGTON — The Senate on Saturday acquitted Donald Trump of inciting the horrific attack on the U.S. Capitol, concluding a historic impeachm…

Trump lawyers argue impeachment based on 'hatred,' not facts

FILE - In this Sept. 7, 2020, file photo, a protester carries a Proud Boys banner, a right-wing group, while other members start to unfurl a large U.S. flag in front of the Oregon State Capitol in Salem, Ore. In its annual report set to be released Monday, Feb. 1, 2021, the Southern Poverty Law Center said it identified 838 active hate groups operating across the U.S. in 2020. (AP Photo/Andrew Selsky, File)

In 2019 and 2020, the ADL tracked 11,026 incidents of extremism or antisemitism in the United States. As the bottom of the graphic says, the color and size of the bubble indicate the type of incident and how many of its kind were reported in that area.

The Anti-Defamation League tracked 21 incidents in the above region in 2019 and 2020. Wildwood, for example, had at least five incidents of white supremacist propaganda being distributed, according to the league.

At least 835 incidents of extremism and antisemitism were tracked by the ADL statewide in 2019 and 2020, including two extremist murders and two terrorist plots/attacks.