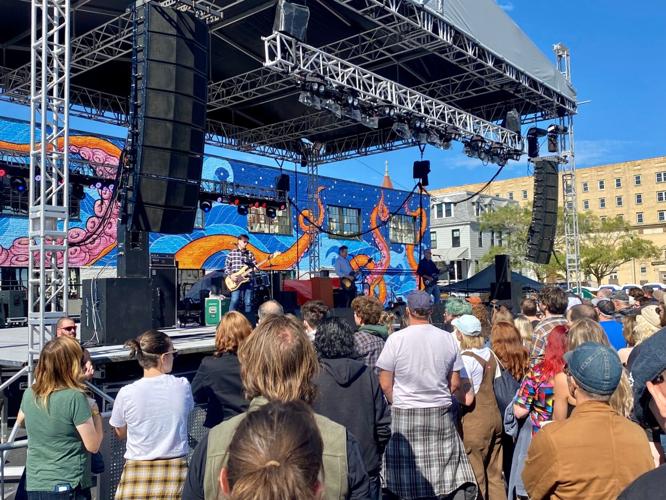 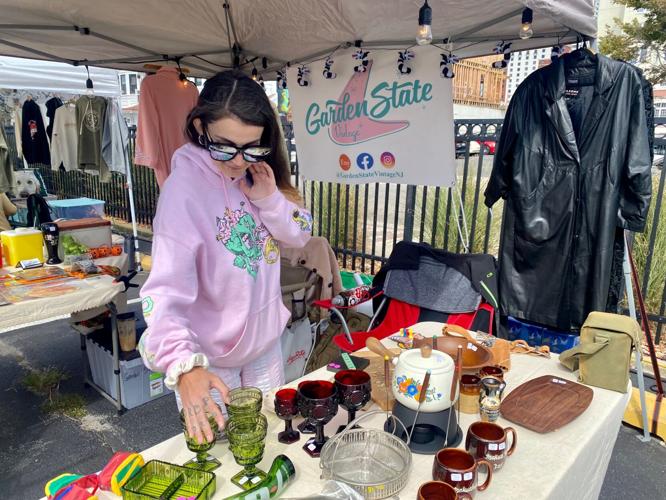 Rorie Alexander tends to her business, Garden State Vintage. Alexander was one of the few local vendors at the festival. 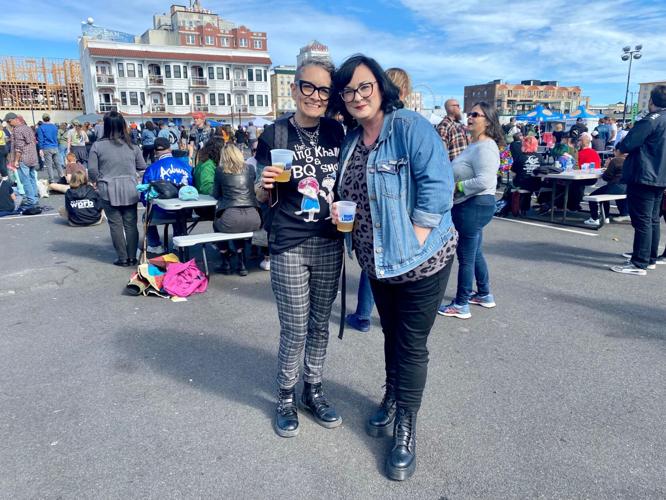 Avery Osborne, left, of Philadelphia, and Melissa Reigel, right, of Hammonton, said they were enjoying the festival. 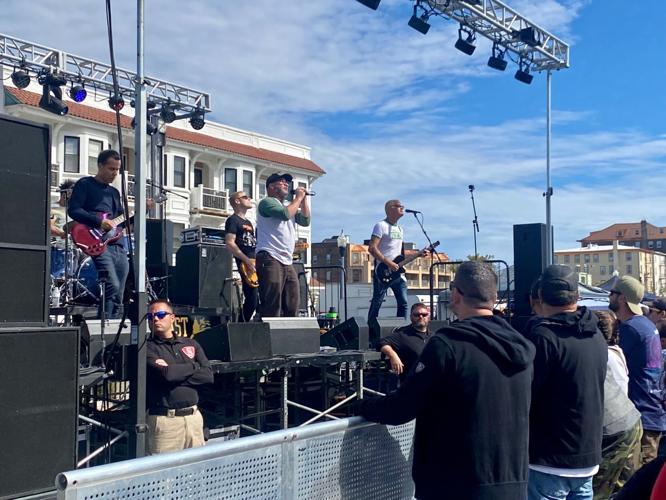 The Frantic City Festival was an all day punk music festival that happened on Saturday at the Orange Loop Amphitheatre on South New York Avenue in Atlantic City.

ATLANTIC CITY — Thousands of people were drawn to South New York Avenue on Saturday as the sound of punk music, cheering crowds and comedian Fred Armisen filled the air.

It was the inaugural Frantic City Festival, an all-day punk music festival that featured 11 bands on two stages, vendors, food and band merchandise in the Orange Loop section of the city.

“We’re laying roots down here,” said Charlie Interrante, the director of operations for Frantic City. “We’re just trying to bring something that’s outside of the casinos that people can come and enjoy, and feel safe doing it.”

Frantic City was created by Interrante and two music industry veterans — Joe Kukos from Holdfast Records, who was influential in the punk music scene in Asbury Park; and Todd Abramson, who owned Maxwell’s, a popular club that supported the indie punk music scene since the early 1980s in Hoboken.

“There’s always been a huge rock-and-roll scene in Atlantic City,” said Kukos. “Some of that got lost with the casinos, when they were booking cover bands. They weren’t seeing the bands they wanted to see, but now they can.”

Kukos said the festival was a good way to get people into Atlantic City.

“More bands should be playing here,” said Kukos, noting a lot of people in the area are into punk music. “Atlantic City is a spot you don’t skip on your tour.”

“There’s always been a big punk rock scene in the area,” said Rorie Alexander, one of the few local vendors at the festival and a fan of punk. “We’ve always been here. We’ve just been waiting for the scene to revive.”

Alexander, of Egg Harbor Township, said the city used to have a lot of punk shows at the VFW, local bars and other establishments that have all been torn down.

But Alexander said it was fortunate that Atlantic City became the place for people from all over who like punk music to gather Saturday and enjoy the music and the city together.

“I know the names don’t sound polite, but they have a great following,” Interrante said. “Most of the people that have reached out to me said they’re excited to see those guys.”

Trisha Grace, and her husband, John, of Philadelphia, went to the festival after finding out about it on Facebook. Grace said they looked at the lineup and saw Rocket from the Crypt was performing, so they decided to buy tickets beforehand.

“It’s a cool festival,” said Grace, who usually goes to shows in Philadelphia or New York City. “We love Atlantic City, and it’s not too far to get to. This offers more to Atlantic City.”

Just under 3,000 people bought tickets to Frantic City, but that didn’t include people who walked up to get their tickets, were on the guest list or purchased VIP tickets, Interrante said.

Alexander said she had a mix of good, “super chill” people from Washington D.C., New York, North Carolina and Virginia visit the stand of her business, Garden State Vintage, on Saturday.

Alexander, who frequents events like the Frantic City often, said the festival was also great for Garden State Vintage, which sells vintage collectibles and clothing from the 1920s to 1980s.

“This festival brings a market to the city we wouldn’t otherwise have, especially after shoobie season,” said Alexander.

She said once she knew Armisen, whose work on “Saturday Night Live” she loved, was hosting the event, she signed up right away.

“Everybody loves Fred Armisen,” Alexander said with a laugh.

Interrante said they booked Armisen because he’d be a fun way to keep the festival going between bands and that “everybody loves him, and he’s hilarious.”

Kukos, of Holdfast Records, said the punk-rock scene in the city stays alive thanks to places like Bourré and the Anchor Rock Club but that more could be done to provide for the niche market.

“We want this crowd to tell us what they want more of,” said Kukos, who mentioned the crowd gave him “early Asbury feels.”

Avery Osborne, of Philadelphia, and Melissa Reigel, of Hammonton, said they came to Frantic City Festival just because they like live music.

Osborne said it was nice to see everyone gathered together for the festival, especially after the pandemic. She also liked that there was plenty of parking, which is something she struggles with when at other festivals.

“It’s nice to see everyone together and enjoying themselves, especially after COVID,” said Osborne, who was excited to see Superchunk perform.

“Everything’s great, except we’re in a parking lot and not a theatre,” said Reigel, who was looking forward to seeing her favorite band since high school, Murder City Devils.

Some festival goers said they wished there were more local food vendors.

Kukos said this is the kind of crowd that is open minded, looking to spend the weekend, go to smaller restaurants and visit more local businesses. So listening to what they wanted was important.

“Our plan is to do this annually, so we hope it doesn’t die out,” said Interrante.

"There's always been a big punk rock scene in the area. We've always been here. We've just been waiting for the scene to revive." Rorie Alexander, vendor and punk rock fan

ATLANTIC CITY — Bourré, a Cajun barbecue restaurant and bar in the Orange Loop commercial district will close Monday in order to remodel durin…

Rorie Alexander tends to her business, Garden State Vintage. Alexander was one of the few local vendors at the festival.

Avery Osborne, left, of Philadelphia, and Melissa Reigel, right, of Hammonton, said they were enjoying the festival.

The Frantic City Festival was an all day punk music festival that happened on Saturday at the Orange Loop Amphitheatre on South New York Avenue in Atlantic City.