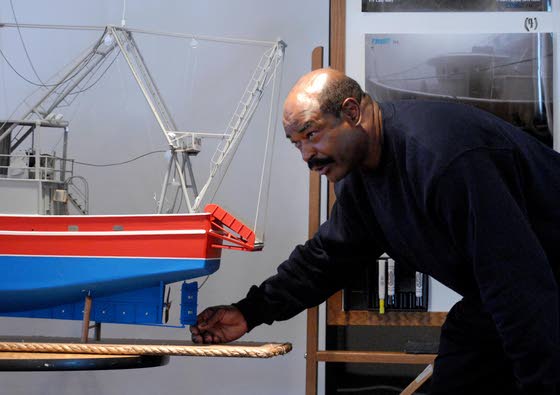 Using the replica of the Lady Mary 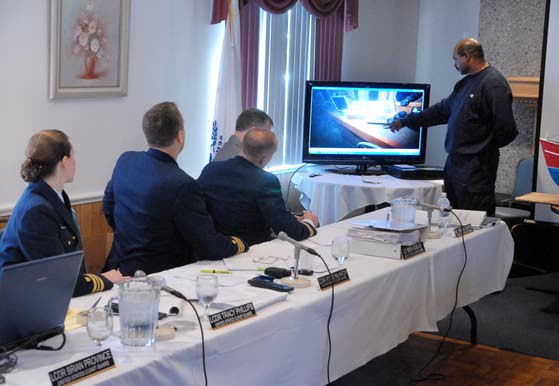 The board listens as Lady Mary owner
By MICHAEL MILLER, Staff Writer

CAPE MAY - The manager of the scallop boat Lady Mary broke down in sobs Tuesday during a hearing into the March 24 sinking that killed his two sons and four others.

For more than an hour, Royal "Fuzzy" Smith, 64, answered the U.S. Coast Guard's technical questions about the maritime accident.

Smith studied an eerie, green-tinged photo divers took of the Lady Mary resting in 210 feet of water on the dark bottom of the Atlantic Ocean. Smith's lawyer, Steve Weeks, asked when the crew was expected to return.

"They probably were coming in Tuesday (the day of the accident)," Smith said with his back to the questioners. Smith, who lives in Lower Township, lowered his head and began sobbing quietly and rocked back and forth on his feet.

The Marine Board of Investigation called for a recess to allow Smith to regain his composure.

The hearing is taking place a few blocks from the Cape May Fishermen's Memorial, where six more names have been etched into the rough stone. The disaster claimed the lives of Smith's only sons, Royal Smith Jr. and Tim Smith, along with his brother, Tarzon "Bernie" Smith. Frank Reyes, Jorge Ramos Arteaga and Frankie Credle also died. The lone survivor was crew member Jose Luis Arias.

Along with the emotional toll, the accident poses possible legal consequences depending on the Coast Guard's findings. Smith postponed the inquiry in April to obtain legal representation.

Smith testified that the Lady Mary was in gear and had a good catch on deck at the time of the sinking. Divers found 12 bushels of scallops in the dredge, as if the sinking had occurred in the midst of unloading.

But Smith testified that it was not unusual for the dredge, full of scallops, to sit on deck for hours if the crew was fatigued or the weather was stormy.

The Lady Mary was fishing scalloping grounds called the Elephant Trunk 60 miles off Cape May in 10-foot seas and 35-knot winds. The crew ordinarily landed 200 bags of scallops during a typical weeklong trip. On its fateful final trip, the crew planned to land an extra 50 bags to pay $1,250 installments on a $22,000 National Marine Fisheries Service fine levied years earlier against Smith's company for fishing in a closed area.

Smith said he talked to his sons by satellite phone a day before the accident. They reported their hold contained 200 bags with more waiting to be shucked on deck.

Smith insists the Lady Mary collided with another boat. He testified the boat listed to the side slightly while hoisting the full dredge off the port side. The captain has to turn the boat during this process to keep the dredge from pulling the boat. After examining the position of the rudder and the steering mechanisms, Smith concluded, "It was turning - or something hit it. … She was in gear with a hard turn - a turn anyway."

After the hearing, Smith said he was convinced a boat collision sunk the Lady Mary.

"The boat was hit. There is no question about it," he said.

But the Coast Guard questioned Smith on other factors that might have explained the sinking - boat instability, operator error or some other calamity.

The panel asked Smith if the crew ever used the dredge as an anchor, a practice called "laying to."

"When they don't want to get off a lick - a good (fishing) place - I've seen them drop the dredge," Smith said. "You wouldn't leave the dredge in the water in high winds."

The panel also quizzed Smith about possible language barriers, the crew's sleep schedule, safety training and equipment, and drug use aboard the Lady Mary. Royal Smith Jr. and Tim Smith, whose bodies were recovered, tested positive for marijuana in a postmortem exam.

Smith said everyone aboard the Lady Mary spoke "American language - English." The boat's captain was in charge of training and dictating the watch schedule. Smith said he had never observed any drug use among the crew.

The Coast Guard also questioned Smith about the boat's stability. The Lady Mary, a former shrimp boat, was reconfigured for scalloping with a new wheelhouse, prompting some fishermen to speculate the boat had become top-heavy.

The crew added armor plates to the windows that had been blown out by waves during previous storms, Smith said.

Smith said he poured 20,000 pounds of cement into a ballast tank, installed a smaller-than-normal wheelhouse and shortened the outriggers to ensure the boat was stable.

Smith said he was satisfied with the stability when he stepped on the Lady Mary's deck and it did not shift under his weight.

"That's all I needed to know about stability," he said.

The normal crew on a scallop boat consists of five people. The Lady Mary had two more to help with "the muscle work," the grueling and tedious task of cutting the scallops, Smith said.

Smith said a scallop boat captain had to be vigilant not only of the weather, other boat traffic and the fishing strategy, but also of his crew's petty mutinies. He said he duplicated electronic equipment aboard the boat so the crew would not have an excuse to come back early if something malfunctioned.

He had to keep the expensive survival suits stowed to prevent theft, Smith said. Some crew members used the suit's strobe lights to read books in their bunks at night, which drained the batteries.

And he said some crew members were known to chuck scallops back in the ocean when the captain was not looking so they would not have to shuck them.

Smith concluded his testimony Tuesday. The hearing will resume 8:30 a.m. today with testimony from mechanics who worked on the Lady Mary and a friend of the crew who was the last to speak to the doomed fishermen by satellite phone.

CAPE MAY - The U.S. Coast Guard is theorizing that a collision with the ocean floor caused the damage found on the Lady Mary.

Using the replica of the Lady Mary

The board listens as Lady Mary owner
© Copyright 2021 The Press of Atlantic City, 1000 West Washington Ave. Pleasantville, NJ | Terms of Use | Privacy Policy
Powered by BLOX Content Management System from TownNews.com.
You don't have any notifications.