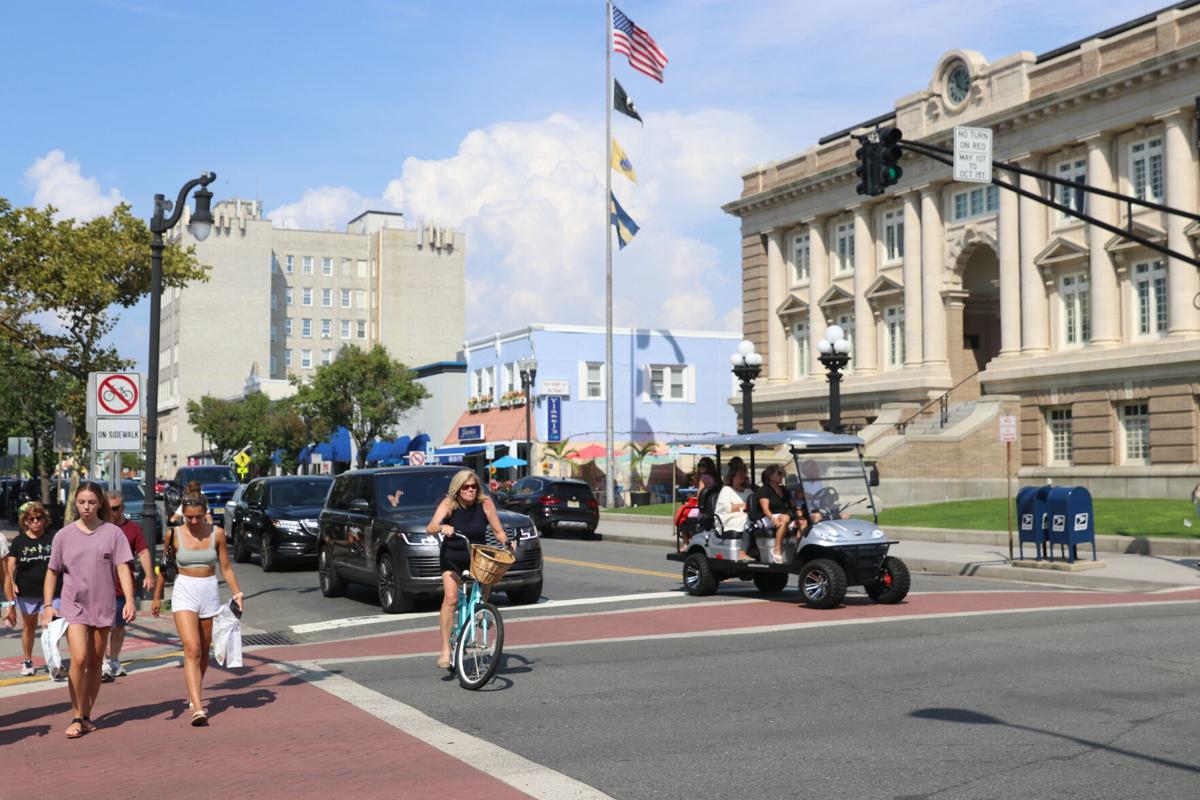 A golf cart moves through the intersection at Ninth Street and Asbury Avenue in Ocean City. 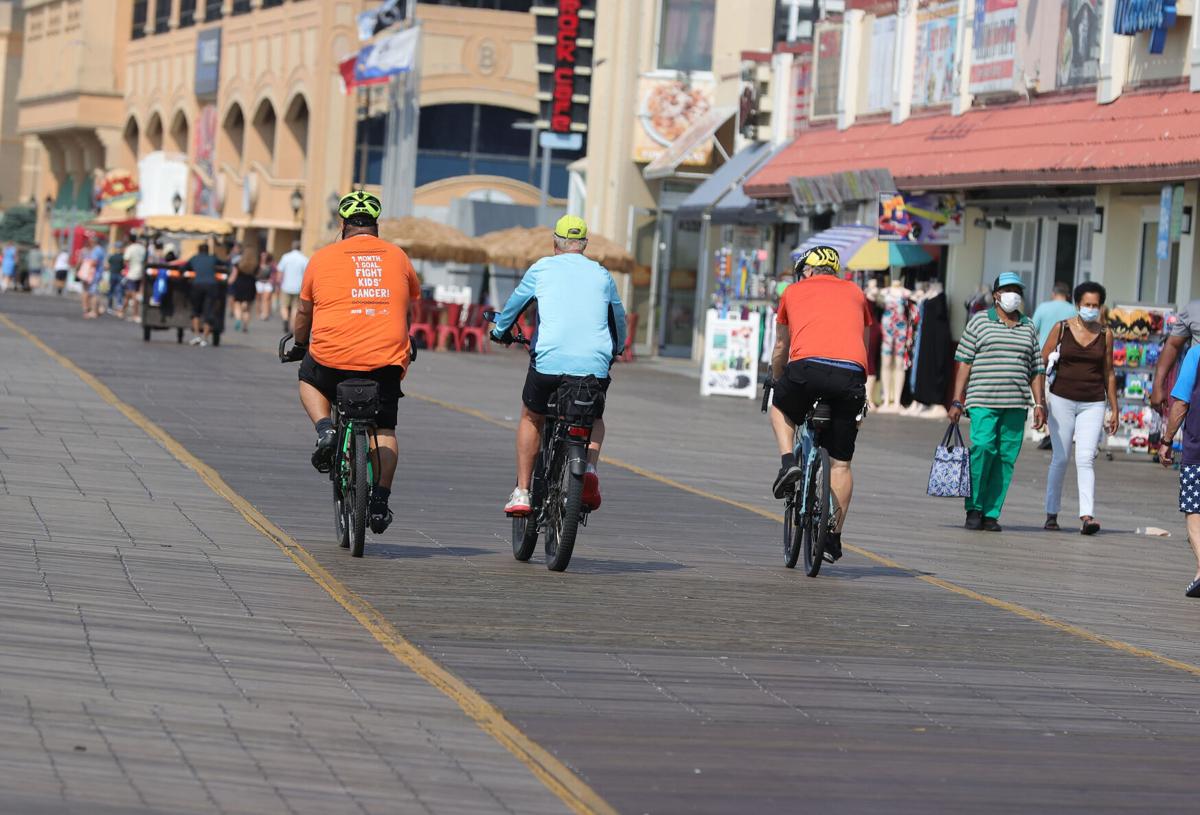 City ordinance prohibits motorized bicycles and scooters from being operated on the Atlantic City Boardwalk, but on a recent morning, several electric bikes mixed with other riders on the wooden way. 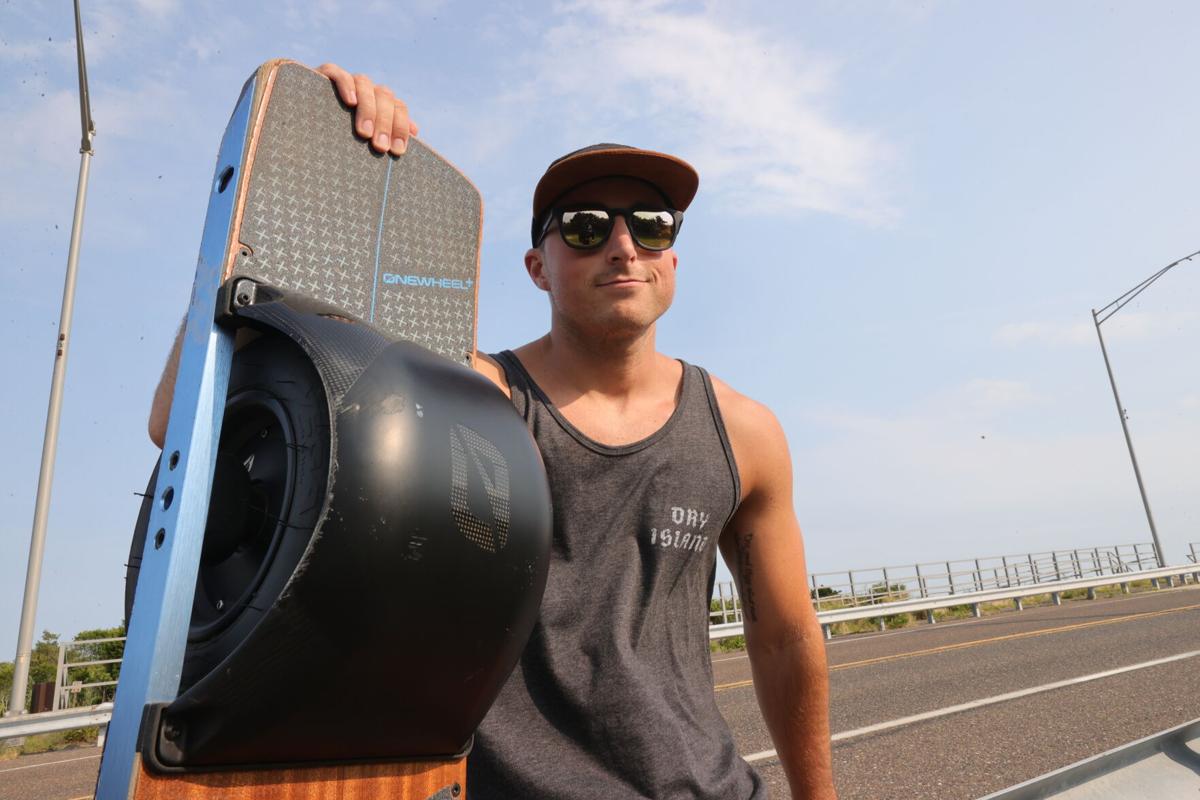 Andrew Gallagher, 25, of Ocean City, recently purchased a Onewheel electric board to get around town. “I absolutely love it,” he said. “I try to ride it every day when I’m done with work.”

OCEAN CITY — Andrew Gallagher had wanted a Onewheel since the first time he’d heard of them.

An avid surfer and snowboarder, he read that the self-balancing, single-heel electric board mimicked those experiences.

The only thing that held him back was the price. The cheapest version costs close to a grand. After he accepted a new job — and received a federal stimulus check this spring — he decided it was time to take the plunge.

“I absolutely love it,” said Gallagher, 25. “I try to ride it every day when I’m done with work.”

Gallagher rides through his neighborhood in the south end of Ocean City, one more in a growing number of battery-powered vehicles at the shore this summer, along with electric scooters, pedal-assist bicycles and low-speed carts. Add to that mix the usual mass of pedestrians, cars and traditional bicycles, and Jersey Shore resorts have been faced with some increasingly crowded and complicated traffic patterns.

“They’re a problem,” said Cape May police Chief Dekon Fashaw. It’s not that the vehicles themselves are inherently unsafe, he said. It’s just that they can move fast and are being added to already congested and sometimes chaotic summer traffic. In Cape May, pedaled surreys and horse-drawn carriages are other variables on the already narrow roads.

With a single wheel set in a board, Gallagher’s Onewheel looks simultaneously simple and improbable. The rider balances with one foot on either side of the wheel, in a stance similar to riding a skateboard. A gentle lean forward gets it moving, while leaning back puts on the brakes.

The manufacturer puts its top speed at about 16 mph. Some other scooter manufacturers list their top speeds at 45 mph or faster, with costs in the thousands of dollars.

A recent ruling from Gov. Phil Murphy’s office found that powered vehicles such as scooters, e-bikes and Onewheels fall under the same classification as motor vehicles. That means the city must allow them on its roads, Fashaw said.

It also means their operators must obey all traffic laws, including riding with the flow of traffic and stopping at stop signs and red lights. But not everyone knows the rules, much less follows them. Fashaw said the department is training its officers even as the city looks at options for local ordinances.

Lindenwold man charged after boat runs aground in Ocean City

“They’re so new to us that we’re still in the learning process,” Fashaw said. He added that riders can also be subject to traffic fines.

The city has rules against the operation of the vehicles on the Washington Street Mall, from which officials banned bikes and skateboards many years ago.

“The city’s so congested with so many vehicles. Then you have these electric scooters zipping by at 25 mph,” said Cape May City Manager Michael Voll. “I’m afraid there’s going to be some serious issues.”

Not everyone is worried.

“It’s actually helped a little with parking,” said Brigantine Mayor Vincent Sera, who said there are only a few such vehicles in that community.

Ocean City police Chief Jay Prettyman said the battery-powered vehicles are becoming increasingly popular, but he has not seen any issues with their use.

Others, however, have raised concerns.

At a July Ocean City Council meeting, Council member Keith Hartzell said he had heard calls for e-bikes to be banned from the Boardwalk. Constituents are worried about high speeds, he said.

According to city Solicitor Dottie McCrosson, state law prohibits the city from treating the power-assisted bikes differently than other bikes.

In Somers Point, Mayor Jack Glasser said he does not believe e-bikes are allowed on the bike path, where no motorized vehicles are allowed. But, he added, it can be hard to tell whether someone is riding a bike with a battery, until they climb a bridge at top speed with little apparent effort.

In Atlantic City, Mayor Marty Small Sr. has also expressed concern about the use of such vehicles on the Boardwalk.

“City ordinance 92-24 prohibits motorized bikes and scooters from being operated on the Boardwalk as well as city sidewalks,” said Rebekah Mena, a spokesperson for the Mayor’s Office.

On a recent morning, several electric bikes mixed with other riders on the Atlantic City Boardwalk despite the ordinance.

Safety experts have not seen a huge spike in injuries as the electric vehicles proliferate. But there are some safety concerns. A report from the Insurance Institute of Highway Safety in 2020 found that e-scooter riders suffered more injuries per mile than bicycle riders, but bike riders were three times as likely to be hit by a motor vehicle. Most scooter riders who were injured were hurt while riding on a sidewalk, the study found.

The study also found that many consumers like the idea of reducing carbon emissions for short trips, but suggested a mix of pedestrians and scooters may be unsustainable.

In Cape May, Voll had concerns about other low-speed vehicles. Often described as golf carts, battery-powered low-speed vehicles have been gaining popularity for years. They are supposed to be restricted to 25 mph speed zones and operated like a motor vehicle. They are often used to shuttle families to and from the beach.

But Voll said he often sees kids riding without seat belts in the back of carts, or even children operating the vehicle. He suggested some of the adults riding with beverages may also present a concern. When those vehicles began to get more popular a couple of years ago, some local police raised safety concerns if one were to get into a collision with a car or truck.

Ocean City police recently put out a reminder about the rules governing low speed vehicles, which must be registered and insured to operate on public streets. The driver is supposed to have a driver’s license, and children are required to be secured in a car seat, just like in a car.

Another concern is rider safety on electric skateboards and pedal-assist bicycles.

Few people wear helmets, Fashaw said. As with bicycles, those under 16 are required to wear a helmet, but for others, if the vehicle cannot exceed 30 mph, a helmet is not required for adults.

Gallagher wore a helmet when he was first learning to operate his vehicle, he said, and when he tried to push the speed to the maximum. But for the most part he wears a baseball cap. He believes the vehicles are as safe as riding a bike; possibly safer.

Matthew Maas, also a resident of Ocean City’s south end, always wears a helmet when riding, and often wears a bright yellow vest as well. He got his pedal-assist bike in October. He wanted something to get him out of the house during the pandemic.

Maas works as a reference librarian at the Ocean City Library and as a library and media specialist at Upper Township Middle School. With the power assist on his bike, he now rides to work in Ocean City more often than not, knowing he will have help pushing into the shore wind if one arises. When on, the bike’s engine adds power to each turn of the pedal.

“Riding into the wind, I’ll kick it up to level three,” he said. The bike has four levels of power, he said. Level one offers a little extra power. Level three allows him to power up steep bridges or ride for miles into the wind.

“Four is fast. Four is, like, really fast. I’m not comfortable with it,” he said. He estimates the bike travels close to 20 mph at the highest setting.

Maas rides on the Boardwalk but says he goes early when there are fewer bike riders and reduces his speed. He said some bike riders and others seem to feel he has an unfair advantage.

“You hear it all the time. Everybody thinks you are cheating,” Maas said. “If anything, I bike more because I know I can bike farther.”

Yacht squeezes under bridge with less than 5 inches of clearance

Powering your home or business with green energy

Powering your home or business with green energy

This sea toad has fins that act like feet

This sea toad has fins that act like feet

Car tires recycled as mobile shelters for cats in Cairo

Car tires recycled as mobile shelters for cats in Cairo

'Enough is enough': Gov. Murphy's outburst was the latest sign of rising anger over pandemic divide

The day after Gov. Phil Murphy’s verbal takedown of a group of anti-vaccination demonstrators, messages of support from friends, other politic…

The era of personal motors arrives

More than two years ago, as electric bicycles became popular, we worried that their top speed of 20 to 30 mph would be unsafe and unnerving ne…

A golf cart moves through the intersection at Ninth Street and Asbury Avenue in Ocean City.

City ordinance prohibits motorized bicycles and scooters from being operated on the Atlantic City Boardwalk, but on a recent morning, several electric bikes mixed with other riders on the wooden way.

Andrew Gallagher, 25, of Ocean City, recently purchased a Onewheel electric board to get around town. “I absolutely love it,” he said. “I try to ride it every day when I’m done with work.”