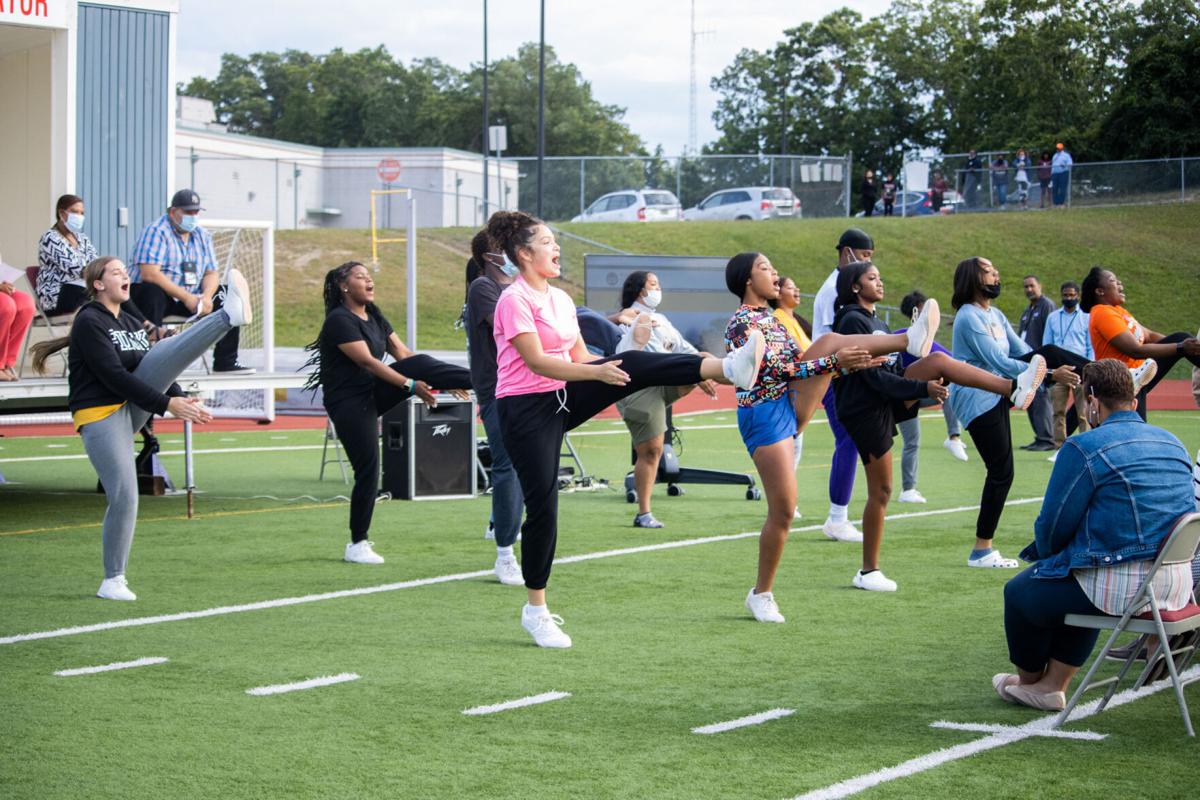 Cheerleaders perform Thursday at Pleasantville High School during a celebration of the district's recent accomplishments, including being relieved of state fiscal monitors. 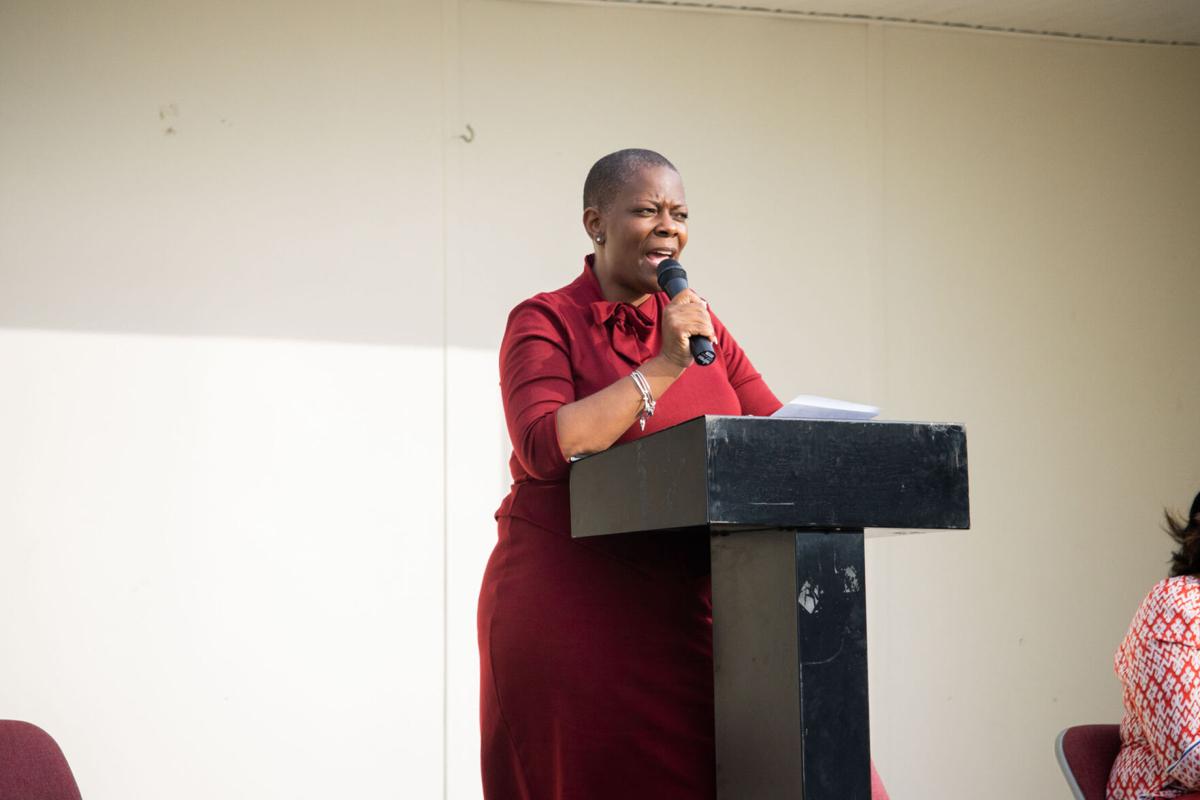 "We have so much to celebrate. In under one year, we have eliminated our food service deficit, put Chromebooks into the hands of our students, replaced textbooks that have not been replaced in more than 15 years, upgraded our facilities and improved our IT infrastructure," Superintendent Natakie Chestnut-Lee said. 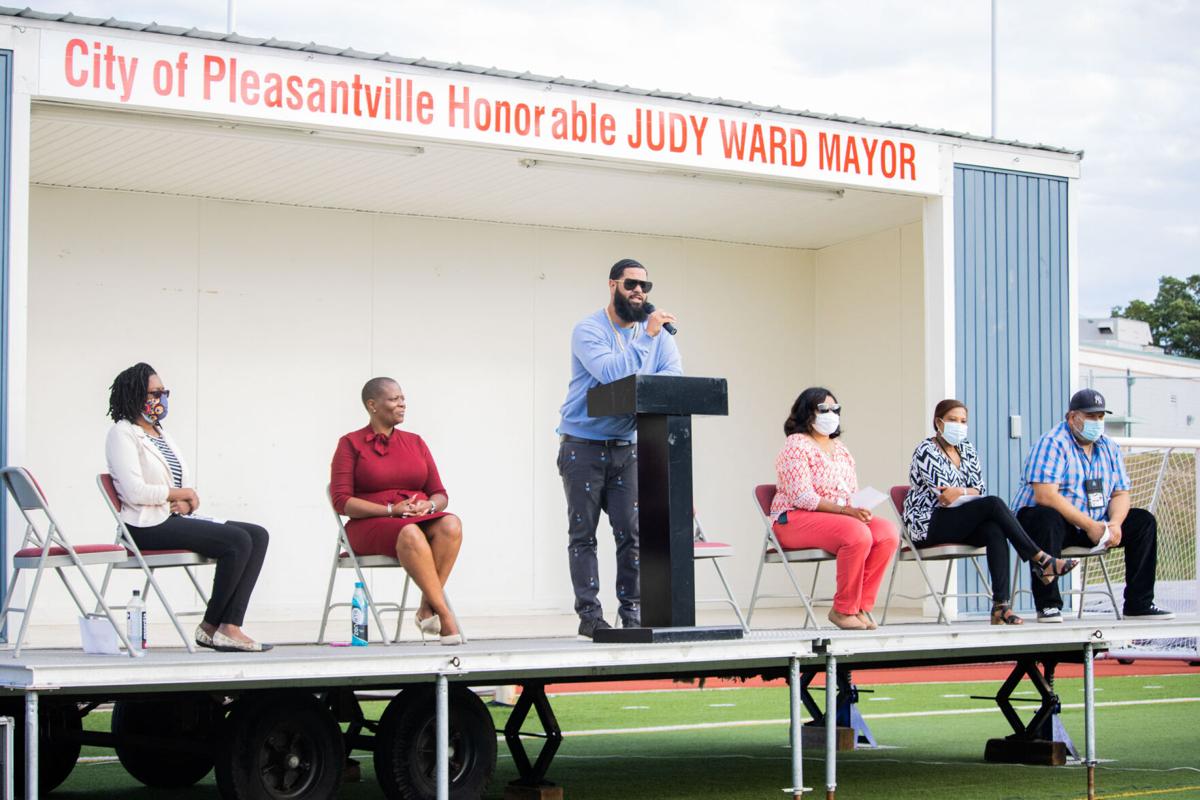 School board President Julio Sanchez, center, addresses recent accomplishments by the Pleasantville school district Thursday during a celebration at the high school. 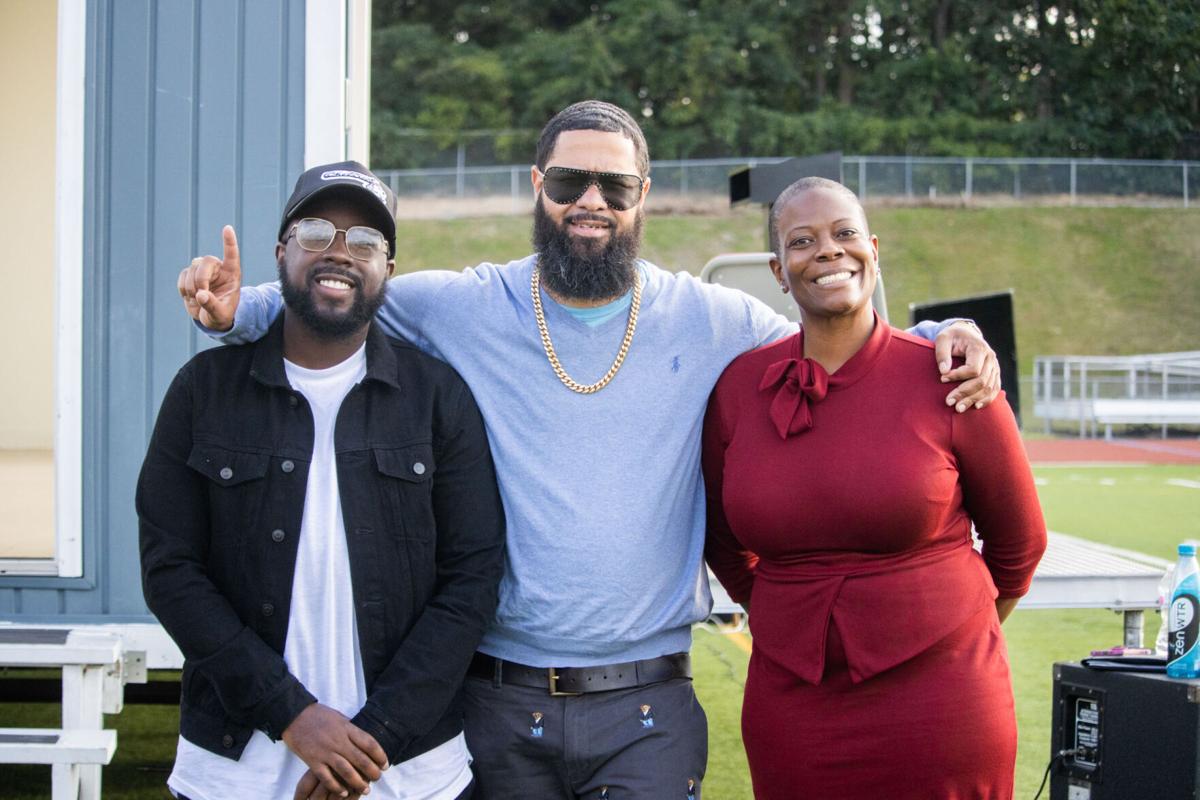 Luke Witherspoon, left, school board President Julio Sanchez and Superintendent Natakie Chestnut-Lee were among the speakers at Thursday's event.

PLEASANTVILLE — The local public school district will soon be without a state-appointed fiscal monitor for the first time in more than a decade.

“The district has demonstrated and sustained sufficient fiscal stability over the past few years and remediated the circumstances warranting the initial appointment of the monitor,” New Jersey Department of Education spokesperson Michael Yaple said Wednesday. “The state monitor successfully completed her contract term and the continued presence of a monitor in the district is no longer necessary.”

Effective Oct. 8, the term of the district’s second and final monitor, J. Michael Rush, will come to an end. Another monitor, Constance Bauer, left at the end of June.

Superintendent Natakie Chestnut-Lee said the decision to remove state oversight has been met with mixed feelings.

“The district still has issues to work through but made a great deal of progress throughout the years and primarily throughout the last year,” Chestnut-Lee said Thursday. “We’re moving in the right direction, but we do have some things to work out. And even with us not having a monitor, I’m confident in our county office of education to aid us in our transition.”

Chestnut-Lee said one of the most prevalent accomplishments the district made in the past year was getting rid of its food service deficit.

District officials, families and students gathered Thursday at Pleasantville High School to celebrate the district being free of the state monitors and other accomplishments.

“Our village has risen,” Chestnut-Lee told the crowd. “We have so much to celebrate. In under one year, we have eliminated our food service deficit, put Chromebooks into the hands of our students, replaced textbooks that have not been replaced in more than 15 years, upgraded our facilities and improved our IT infrastructure.”

The district also was able to prove its fiscal stability within the past year, Chestnut-Lee said.

“Which in turn eliminated not one but two state monitors,” she said. “Our district has had state monitors for the last 16 years. So we are really doing some monumental work here in our district.”

The district also was selected to participate in Rowan University’s Opportunity for Postsecondary Excellence and Success (ROPES) program.

PLESANTVILLE — The local Board of Education has approved its $100.8 million budget for the 2…

“Our district is only one of seven in the state participating in this program,” the superintendent said. “The ROPES program is open to high school juniors starting this summer. It promotes opportunities for our students to be successful and enhance their opportunities through workforce development.”

Thursday’s celebration was also held to announce a new partnership between the district and Darkchild Entertainment, the music production company owned by Pleasantville native Rodney Jerkins. The district and Jerkins will team up to open an arts academy in the city.

“As you know, my studio used to be in Pleasantville, New Jersey,” Jerkins said in a video played during the event. “I’m excited about this opportunity. I’m excited to know that there is young talent that will come through the city of Pleasantville and one day we will see rising stars.”

Meanwhile, school board President Julio Sanchez shared other officials’ mixed feelings about the monitors going away.

“Theoretically, it’s a step in the right direction, but on the other hand, there’s some instability at the place right now so I’m worried about what may happen,” Sanchez said earlier in the week.

An example of that instability was the disagreements the district had about hiring teachers in the beginning of the school year. Sanchez said the state monitor was able to overturn the deadlocked school board and allow them to begin hiring.

“Certain things like that make me a little apprehensive,” Sanchez said. “I also question the state’s motive to do that at this time. For a long time we were trying to get them (the state) to get rid of them (the monitor), and then all of a sudden out of nowhere.”

The district has had a school monitor since 2007, when John J. Deserable was appointed to the position by then-Gov. Jon S. Corzine and Education Commissioner Lucille Davy.

The appointment was made as part of Corzine and Davy’s initiative to “hold school district officials accountable for their decisions regarding the use of public funds and to ensure that state school aid is spent efficiently and effectively.”

The state was also concerned about bank accounts and the general ledger not being properly reconciled, inadequate recordkeeping, inadequate purchasing systems that lacked controls, budget transfers that were made without proper authorization, and treasurer and secretary reports that were not presented to the board in a timely manner.

Rush was appointed as a second monitor in 2019 due to infighting on the school board over procedures and personalities.

“Who said Pleasantville couldn’t rise up?” Chestnut-Lee said Thursday. “We haven’t made it yet, but we’re well on our way.”

See more photos from Thursday's celebration in Pleasantville at PressofAC.com.

Pleasantville superintendent speaks out against attempts to remove her

Cheerleaders perform Thursday at Pleasantville High School during a celebration of the district's recent accomplishments, including being relieved of state fiscal monitors.

"We have so much to celebrate. In under one year, we have eliminated our food service deficit, put Chromebooks into the hands of our students, replaced textbooks that have not been replaced in more than 15 years, upgraded our facilities and improved our IT infrastructure," Superintendent Natakie Chestnut-Lee said.

School board President Julio Sanchez, center, addresses recent accomplishments by the Pleasantville school district Thursday during a celebration at the high school.

Luke Witherspoon, left, school board President Julio Sanchez and Superintendent Natakie Chestnut-Lee were among the speakers at Thursday's event.