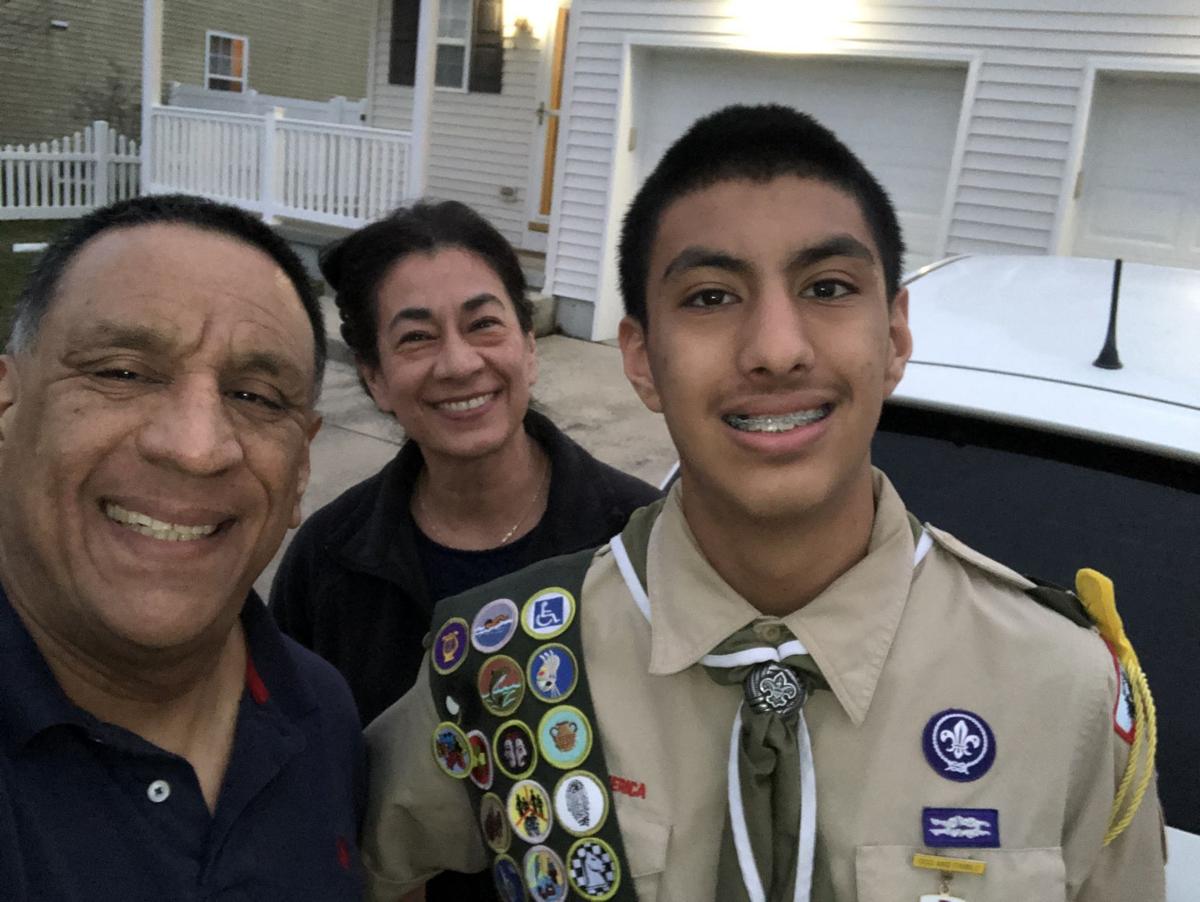 Ron and Elisa Caro with Ronnie Jr., 14, all of Galloway Township, take a photo before Ronnie’s Life Scout rank review. 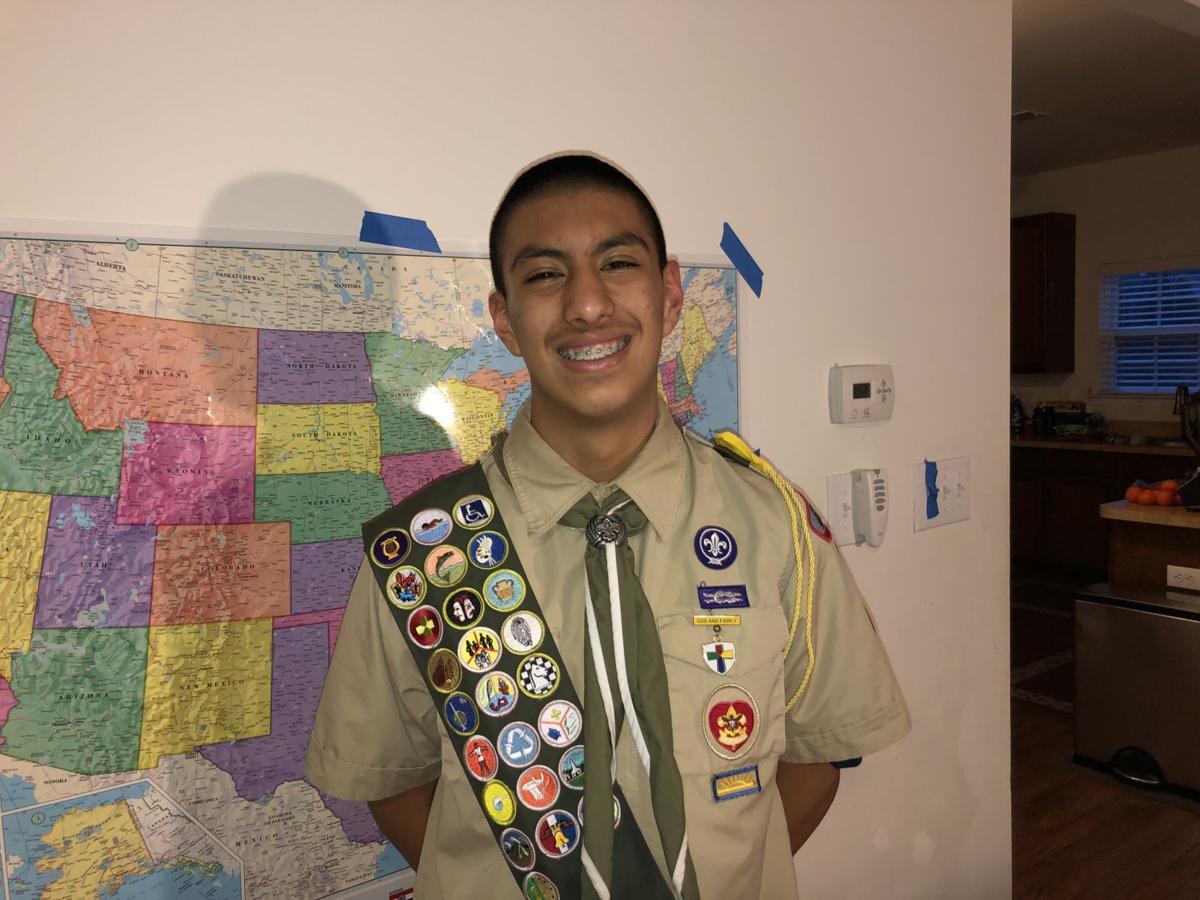 Ronnie Caro Jr., 14, of Galloway Township, shows off his new Life Scout rank March 25. Ronnie, who has autism, has been a member of Boy Scout Troop 77 since he was 6 years old. His parents got him involved as a way to socialize him, and he has now achieved the second highest ranking possible for a Scout. 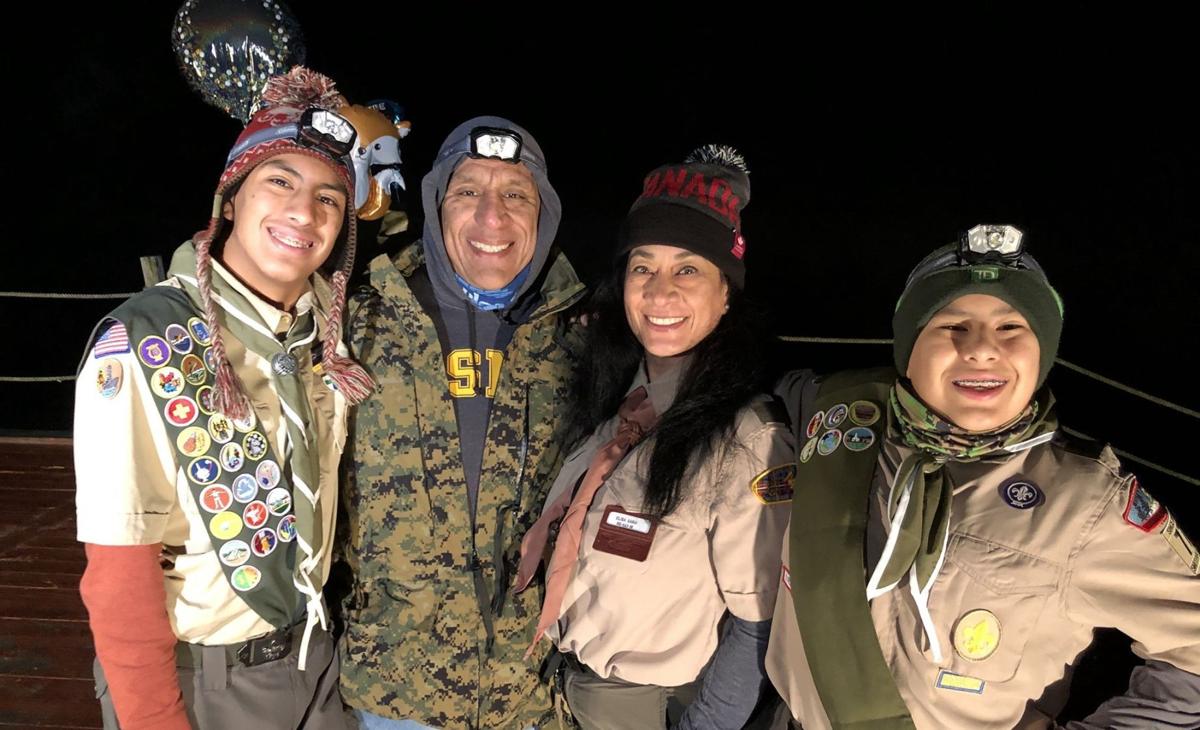 The Caros, Ronnie Jr., 14, dad Ron Sr., mom Elisa, and Ricky, 12, at Joseph A. Citta Scout Reservation At Brookville in Barnegat in November. 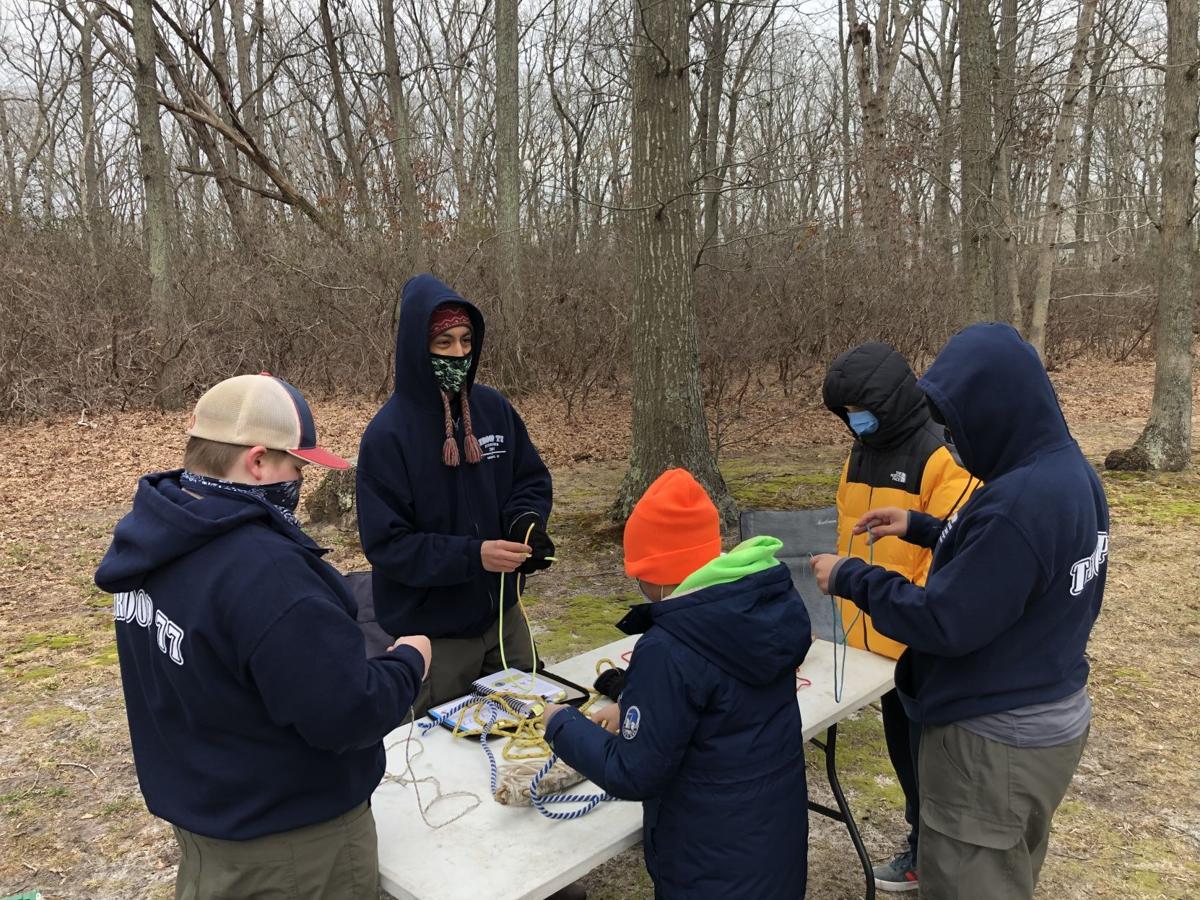 Ronnie Caro Jr., 14, runs the “Knot Station” and teaches Troop 77 Scouts how to tie knots during the 2021 Troop 77 Klondike Prep. Ronnie, who has autism, recently achieved the rank of Life Scout. His family says that Scouting has been a positive outlet and a safe space for their son.

GALLOWAY TOWNSHIP — Ronnie Caro Jr. is an academically thriving 14-year-old on his way to getting his first job, but 12 years ago, when he was diagnosed with autism, Ronnie’s parents said they were overwhelmed by what his future might hold.

“When you get this diagnosis, you almost don’t know what to do,” said mom Elisa Caro, of Galloway.

Ron Sr. and Elisa Caro were looking for support and, when he was 6, signed Ronnie Jr. up for Boy Scouts Troop 77 in Galloway as a way to increase his socialization.

Last week, Ronnie achieved the rank of Life Scout, the second highest rank available and one away from becoming an Eagle Scout, a rank only 8% of Boy Scouts achieve.

“It can be a little challenging at times for me,” Ronnie Jr. said. “But I went through it, and I feel like I did something not even a normal person could possibly ever do, and I’m really proud of that and what I learned through this experience.”

Because of awareness campaigns like World Autism Day, recognized internationally on April 2, Ronnie and others like him have more opportunities than they did 14 years ago, but local education experts say there is much more work to do.

“I think there still continues to be more need for more support. Our numbers of kids being diagnosed are not decreasing,” said Mary Kientz, associate professor of occupational therapy at Stockton University.

The United Nations first recognized World Autism Day in 2008 as a way to build awareness to help those with autism lead more successful and fulfilling lives. Centers for Disease Control and Prevention data show about 1 in 54 children in the United States are diagnosed with an autism spectrum disorder, and New Jersey has one of the highest rates in the nation, with 1 in 32 children being diagnosed each year.

In a roundtable discussion at Kean University on Thursday, Kean President Lamont Repollet, the former state education commissioner, compared the way society reacts to people with autism as trying to fit a square peg in a round hole.

He said that instead, society should be looking for ways to expand the round hole so the square peg fits inside it.

For parents of children with autism — even in New Jersey, which was recently ranked third in the country by Autism Parenting Magazine in its list of most supportive states to raise a child diagnosed with autism — the diagnosis can be shocking.

“Elisa and I were never aware of it at all,” Ron Caro Sr. said. “It’s been challenging, but we’ve learned along the way. The awareness is not always easy to get across to people.”

He said Isabelle Mosca, of Ventnor, founder of the advocacy group FACES 4 Autism, was one of the first people they called after Ronnie was diagnosed.

“And from that point on, her and some other folks have been really helpful in getting us the resources,” Caro said. “These kids can do extremely well, but they need the support and they need the other kids to be aware.”

{child_flags:top_story}Ways to cope with stress of pandemic

“They will learn, they will get there in their own pace,” Elisa Caro said. “You’ve got to continue to believe in that and reach out, trust your instincts. They’ll find their place. It doesn’t end, it may never end, but the search to be accepted to just get out there and try and just to talk to more people. And if the conversation continues, and if people continue to talk, there will be more awareness, more acceptance.”

Christina Simmons, an assistant professor of psychology at Rowan University, said the awareness campaign should include that every person diagnosed with autism needs different types and levels of support, just like anyone else.

She said there is a greater understanding now of what is called “neurodiversity” and the strengths and weaknesses each person has.

“I think it’s also important that we’re considering the perspectives of the students themselves and their families,” Simmons said. “Being able to create an education that’s most beneficial for that individual … there isn’t one approach that’s going to be beneficial for every single student.”

Kientz said that since the U.N. first marked World Autism Day, the level of awareness is much higher, due in part to the depiction of characters with autism on television shows such as “The Good Doctor” on ABC and “Atypical” on Netflix, as well as the inclusion of Julia, the first autistic character on “Sesame Street.”

“So that’s the next piece of all of this. Yes, there’s wonderful things happening, but we need to do more,” Kientz said.

Elisa Caro said that for Ronnie Jr., scouting has been a sanctuary. The principles of Scouting — being helpful, kind and courteous — were the same things they wanted to instill in Ronnie and their younger son, Ricky.

“We realized that we found a community where all the parents were trying to raise their kids to instill those principles, and that made it a very safe place to be. And he was so accepted,” she said.

Ronnie said he is motivated in life by just being with his troop.

“I really do love scouting. I love doing it as a hobby. It really does change me, who I am as a person,” he said.

GALLOWAY TOWNSHIP — The township Planning Board will hold a virtual public hearing at 7 p.m. April 15 to review and vote on a proposal to buil…

Ron and Elisa Caro with Ronnie Jr., 14, all of Galloway Township, take a photo before Ronnie’s Life Scout rank review.

Ronnie Caro Jr., 14, of Galloway Township, shows off his new Life Scout rank March 25. Ronnie, who has autism, has been a member of Boy Scout Troop 77 since he was 6 years old. His parents got him involved as a way to socialize him, and he has now achieved the second highest ranking possible for a Scout.

The Caros, Ronnie Jr., 14, dad Ron Sr., mom Elisa, and Ricky, 12, at Joseph A. Citta Scout Reservation At Brookville in Barnegat in November.

Ronnie Caro Jr., 14, runs the “Knot Station” and teaches Troop 77 Scouts how to tie knots during the 2021 Troop 77 Klondike Prep. Ronnie, who has autism, recently achieved the rank of Life Scout. His family says that Scouting has been a positive outlet and a safe space for their son.