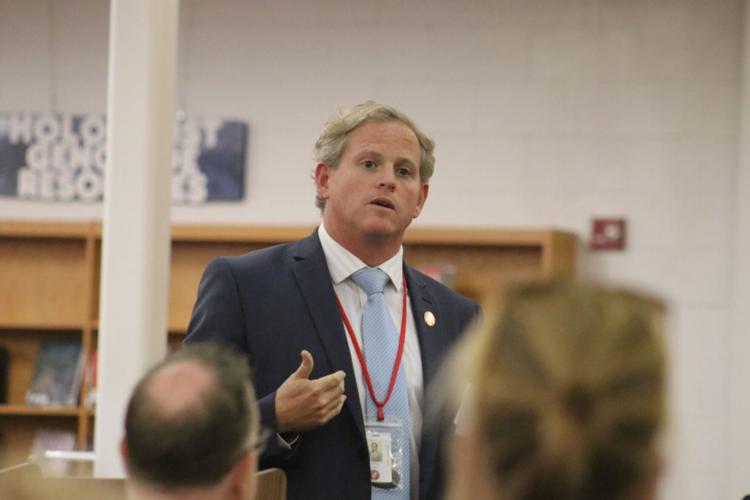 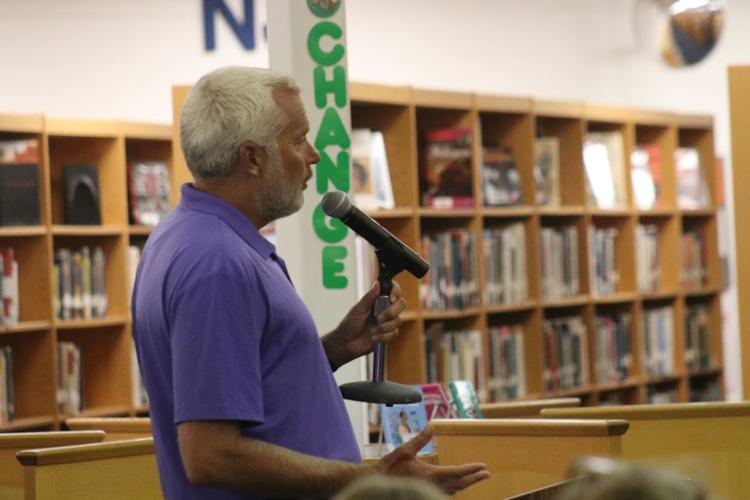 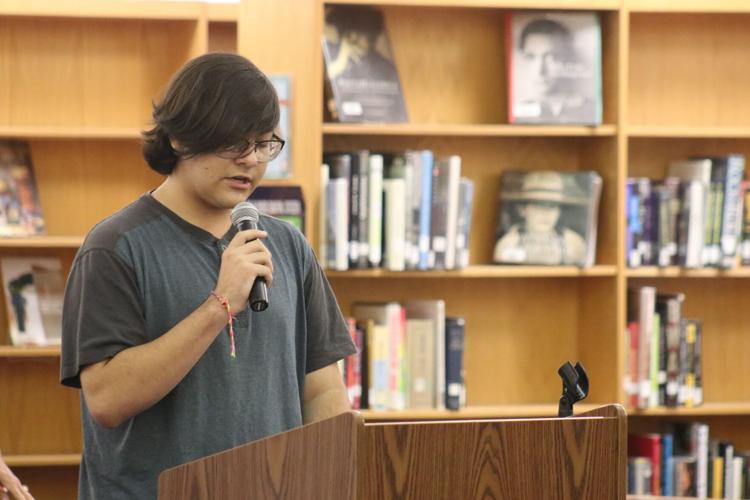 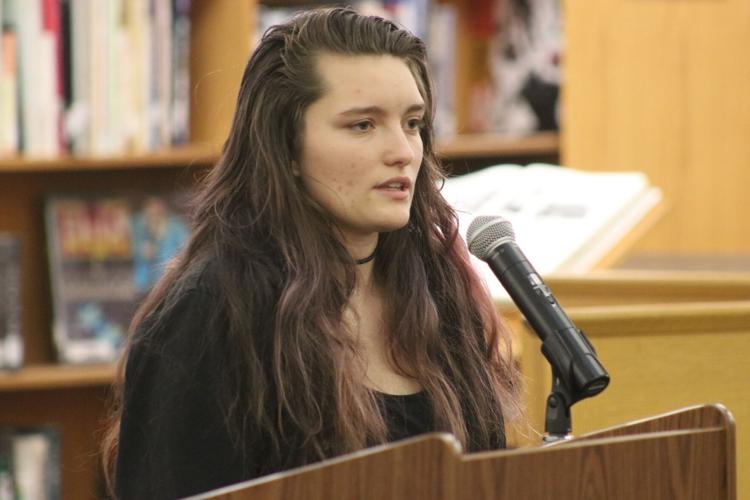 That was included in the messages from school board members and speakers on both sides of an ongoing fight over state education standards during a lengthy Board of Education meeting Wednesday.

Speakers went back and forth for more than an hour during the public comment portion of the meeting, with pointed arguments at times. But both sides of the debate say they are only interested in the well-being of the children.

The standards were not on the agenda. In a narrow vote, the school board had already accepted them at the August meeting, and they will now be used for the district to create curriculum for its three schools.

A group of parents and residents have been critical of the health education standards, specifically in how they relate to education on gender and sexuality.

Most opponents argue the standards will lead to lessons that are too explicit and will cover material best left to families.

OCEAN CITY — Students, parents and some teachers gathered Sunday morning on the Boardwalk an…

Parents can decide to opt their children out of the lessons created under the Comprehensive Health and Physical Education standards, but critics suggested Wednesday that the process was more difficult than school officials suggest.

During the meeting, some recent alumni and current students called for a more inclusive school district, and suggested bullying remains a problem.

Ocean City High School senior Nate Ginet has sought to establish a PRISM club in the school district. He told the board the controversy shows the club is needed now more than ever.

He said he and others have been looked down on by peers and staff members at the school. He said other students have tried to begin similar clubs, alleging they were told there were no gay kids at the school.

The club would be a safe space for LGBTQ students and their allies, he said.

K.T. Muller, a recent graduate of Ocean City High School, said gay and transgender students experience a lot of harassment both in person and online.

Ocean City explains sex ed standards to parents, promises to teach them 'as little as possible'

“There’s been a lot said by both sides. I won’t deny that. Because both sides are angry,” Muller said. “I would just like to ask that we approach this with grace and understand that there are students involved. These are 14-, 15-year-olds.”

Parents have rights, she said, but young people are still human beings, adding that bringing hate into the conversation will cause damage.

A rally held outside City Hall this month was brought up repeatedly by speakers on both sides.

Some of the speakers said it was held in support of the rights of parents, and of a City Council vote planned that night backing a state bill that would create a Parents Bill of Rights.

Robin Shaffer called it a peaceful rally for the rights of parents and to oppose what he called the inappropriate state standards. It sought to show displeasure with the school board decision.

“There was no intent to offend anybody. I apologize to anybody who might have been offended by any one of our speakers,” he said. “We did not agree with every word spoken that day, but in a free republic, it’s hard to control every word spoken at every minute of the day.”

Several parents cited messages from that rally they say ostracized and criticized the LGBTQ community, and some said the district has had a rocky history on stopping bullying and protecting students.

Dawn Dolinsky said the school administration had sent a letter to parents promising to welcome and educate all students. She implored the school to live up to that promise.

“We know that if a student’s basic and safety needs are not met, they can’t learn,” she said.

Dolinsky said her child did not experience that protection last year in the district, saying she faced harassment that was not addressed.

She said some members of the staff and administration worked hard for her child, but other staff members allowed bullying to continue.

“It sends a clear message to a child that their experiences are not important, they are not valued and even worse, that the harassment behavior is tolerated and condoned,” she said. “My child attempted to take her own life last year, largely based on how she was made to feel. It can’t continue.”

Board President Patrick Kane said the entire district would do everything possible to support and protect all students, without regard to race, religion, gender, sexuality or any other factor. Other board members said the same, including members who voted against accepting the state standards.

They described that as a different issue, and said the school community was there for the students.

Still, some parents and residents expressed frustration with the vote, and one suggested those who voted against accepting the standards last month should consider resigning from the board.

Members of the public speaking against the state standards said they never sought to ostracize anyone.

Three of the speakers who are members of the Ocean City Alliance for Sensible Education are also running for school board this year.

Shaffer said activists have sought to hijack their message.

“Our children have been attacked. Our faith has been attacked. We’ve been mocked, harassed, intimidated,” Shaffer said. “These are polarizing enough times without dangerous lies that are being promulgated by activists that don’t live here. The activists don’t care about Ocean City.”

Other speakers that evening said the rally organizers could have clearly disavowed speakers who disparaged gay and transgender people.

Shaffer is the president of the group and is running for a one-year term against Ryan Keith Leonard, who was appointed to the board this year to fill an unexpired term until the election. Dale Braun is also running for that seat.

Catherine Panico and Elizabeth Nicoletti, also listed as founding members of the Alliance for Sensible Education, are on the ballot for full terms on the board. Incumbent members Kane, Greg Whelan and Charles Roche are seeking reelection, and Kevin Barns, a local attorney, is also on the ballot for the seat.

Both Nicoletti and Panico also spoke at the meeting Wednesday, each saying there was no intent to ostracize anyone when the rally at Mark Soifer Park across from City Hall was planned.

The national discussion on gender and sexuality has caused divisions among students, educators and families. Nicoletti and other members of the Alliance for Sensible Education say their children have been harassed because of the rally and accusations that they are advocating for the marginalization of gay students, which they deny.

Panico said she supports the right of every student in the district to feel safe and accepted. She said she is opposed to any kind of bullying, harassment or intimidation. She also called on the district to be more transparent and to keep parents better informed, especially when it came to potential medical issues.

“No information known to staff, coaches or volunteers should be withheld from parents,” she said. She did not give any context for the request, but in previous public discussions, parents were told that school counselors and teachers could not disclose to parents if a student discussed their sexual orientation or gender identity unless the child agreed.

“I believe that the right to raise one’s child is deeply embedded in our history,” she said.

UPPER TOWNSHIP — The Township Committee on Monday joined a growing number of communities in support of a state-level parents’ bill of rights, …

MAYS LANDING — On a sunny Tuesday at Atlantic Cape Community College, roughly 20 students, staff and faculty gathered at one of the campus’s g…

OCEAN CITY — Last year, with challenges in multiple races for school board, many candidates were motivated by concerns about mask mandates in …

Ocean City votes for change in school board election

OCEAN CITY – Voters opted for change for the Board of Education, with all four incumbents on the ballot falling short in their reelection bids.

New Jersey debates response to gun violence in schools, with no clear solutions

ATLANTIC CITY — As the number of mass shootings in the United States continues to grow, parents, teachers and elected officials are scrambling…

Dolphins have been helping these Brazilian fishermen for nearly 150 years

Dolphins have been helping these Brazilian fishermen for nearly 150 years