Subscribe
Read Today's E-Edition
Share This
Ocean City explains sex ed standards to parents, promises to teach them 'as little as possible'
0 Comments
Share this
1 of 2 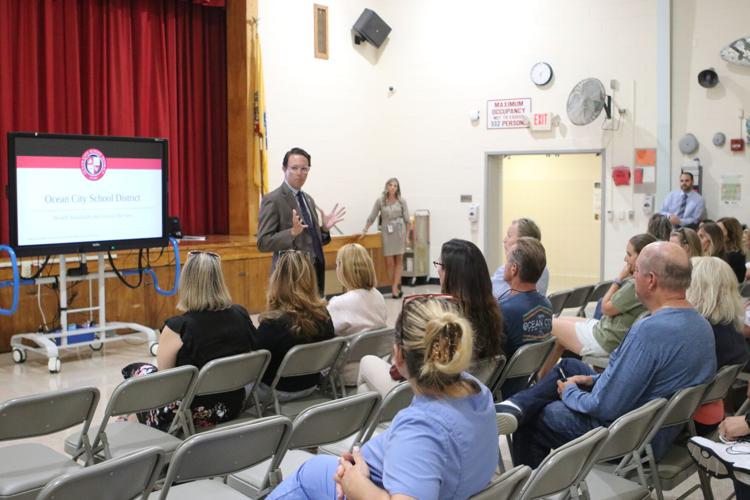 Ocean City Superintendent Matthew Friedman welcomes parents to the Intermediate School on Wednesday, the second of three events at which parents were invited to hear about new state health and physical education standards taking effect this year. 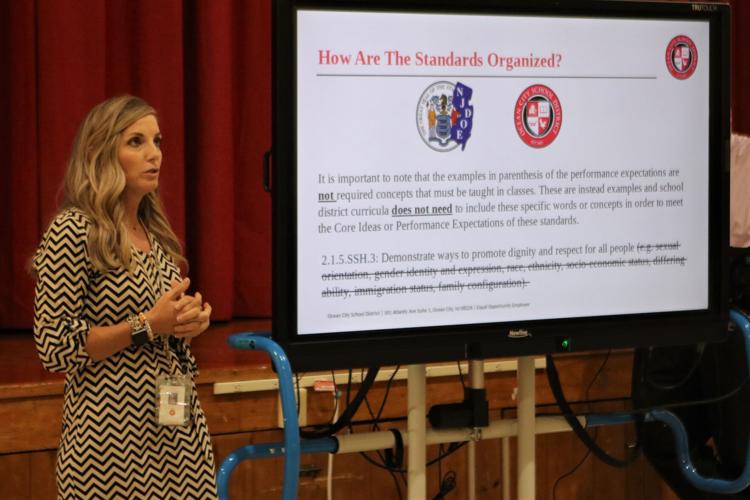 Lauren Gunther, director of student services for the Ocean City school district, discusses how the new standards will be implemented in Intermediate School classrooms. The standards have proven controversial in the city.

OCEAN CITY — With controversy over state guidelines on health education seeming to continue to build, about 30 parents heard details from school staff on how the standards will be implemented in the classroom.

The answer: The district will implement them as little as possible.

The event Wednesday night at the Ocean City Intermediate School was the second of three, with one held in each of the schools in the district. The district describes them as parent academies. The first was at Ocean City High School on Tuesday, with a final event set for Thursday at the Primary School.

Approved in 2020, the Health and Physical Education Standards go into effect this school year, covering a broad range of topics, including nutrition, exercise and substance abuse prevention. But the elements on sexuality and gender have drawn concern.

Since the Board of Education adopted the state standards as a basis for the schools’ curriculum in August, opponents of the new standards have argued they go too far, covering material that is best left to families.

Some opponents suggest the state is seeking to sexualize children. At public events, parents and community members have suggested that school material may be too explicit, and have taken issue with material on gender identity and on the range of human sexuality.

The matter appears far from settled. A petition on Change.org, “LGBTQ Students Belong at OCHS,” had more than 4,000 signatures as of Thursday morning.

Robin Shaffer, one of the organizers of opposition to the new standards, has accused the petitioners and others of misrepresenting the positions of his group, the Ocean City Alliance for Sensible Education, saying they “support the right of any person to live free of hate or intimidation.”

He alleges that “LGBTQIA activists” are the ones bullying and threatening those who disagree. Shaffer said he and other members are set to meet with Ocean City police Friday to discuss some of the alleged threats those who attended a rally last week have received. His organization supports the rights of parents, he said.

Hayden Wathen, a 2022 graduate of Ocean City High School who began the online petition drive, said the opponents of the new standards are creating an atmosphere where students who are gay, transgender or otherwise different feel ostracized and unwelcomed.

Wathen said this week that he would be “incredibly surprised” if anyone who signed the petition threatened anyone, no matter how heated the rhetoric.

“If they did, they certainly don’t represent us,” he said.

Another new group, “We Belong in Cape May County,” argues some opponents of the new standards engage in hate speech, and suggests students are the ones experiencing trauma and bullying.

Wathen said he wanted to hear an unequivocal statement from the school district that students would be welcomed and protected, regardless of their orientation or expression of gender identity.

On Thursday, in a letter signed by Superintendent Matthew Friedman and school board President Patrick Kane, the district said all children are welcome.

“On behalf of the Board of Education and administration we want to assure you, as a public school district, we have an unwavering commitment to unequivocally welcome and educate every child,” it reads. “From our youngest preschoolers to our seniors on the brink of adulthood, every child is important, and every child is deserving of a safe and top-notch learning environment.”

It also mentions the controversy, and stresses the fact that parents can opt their students out of the classes.

“In recent weeks, the New Jersey Department of Education’s 2020 Health and Physical Education Standards have been receiving increased attention by communities all over the state. Much of that attention has focused on what divides us, rather than what unites us,” the letter continues.

At the Intermediate School on Wednesday, at least one parent suggested it would be better if the parent had to specifically opt in.

That is not an option, said Lauren Gunther, director of student services for the district.

She went over material that would be taught as part of the health classes, and how parents and guardians could notify the school if they did not want their children to participate. One parent wanted to know what the students would do instead.

Rather than go to that class, they would go to the gym and most likely play basketball, Gunther said. The district plans to keep the health lessons contained, making it less disruptive for students who will not attend.

The presentation included reading books about identity, in which the protagonist identifies himself as a brother, son, writer, artist, dancer and more.

Students will learn about reproduction but will not learn about contraception until high school, Gunther said. The presentation did not include any material about sexual orientation or gender identity. The classes won’t, either, unless a student brings it up, she said.

The classes will be taught in second, fifth, eighth and 12th grades.

Another parent asked what would happen if a student wants to discuss their own situation, essentially if someone decides to come out to the class. In that case, the parents were told, the student would be directed to a district health counselor.

As part of a process, the student would be encouraged to speak with their family. But without the child’s consent, the school cannot notify the parents of the discussion. That’s state law, said Gunther and Curt Nath, the director of academic services.

“A parent has the right to know about their own child,” one person said. Most of the time, they know already, Gunther said. But if a child is adamant, the district cannot violate their wishes.

In the classroom, questions that go beyond the scope of the district’s curriculum would be redirected to parents. Not every question has to be answered, school staff said.

Nath added that some parents may want the district’s help answering some questions. In cases where there are topics for which a parent does not know what to say, the district has professionals who can help. He said the district is there for the families.

One woman attending the event Wednesday spoke up for the teachers, saying they are in a difficult position doing their best to care for the children and meet the needs of each one in their classroom.

“Do you want to teach middle school health?” she asked.

OCEAN CITY — Students, parents and some teachers gathered Sunday morning on the Boardwalk and marched around Ocean City High School in a publi…

Colorado police cruiser hit by train with suspect handcuffed inside

Colorado police cruiser hit by train with suspect handcuffed inside

Why an ex-Russian officer is feeling the army call-up

Why an ex-Russian officer is feeling the army call-up

Ocean City Superintendent Matthew Friedman welcomes parents to the Intermediate School on Wednesday, the second of three events at which parents were invited to hear about new state health and physical education standards taking effect this year.

Lauren Gunther, director of student services for the Ocean City school district, discusses how the new standards will be implemented in Intermediate School classrooms. The standards have proven controversial in the city.