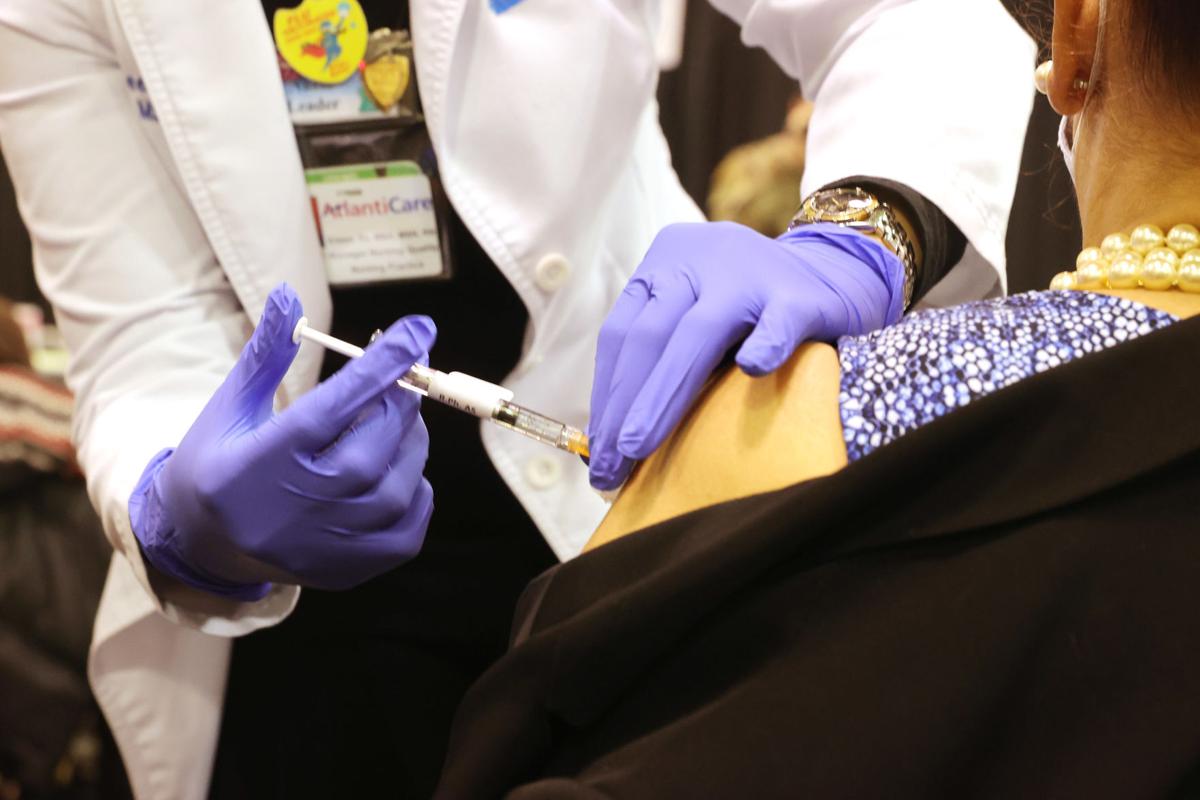 AtlantiCare nurse Eileen Xu gives Miriam Ramos, of Pleasantville, a dose of the COVID-19 vaccine in January at the Atlantic City Convention Center. 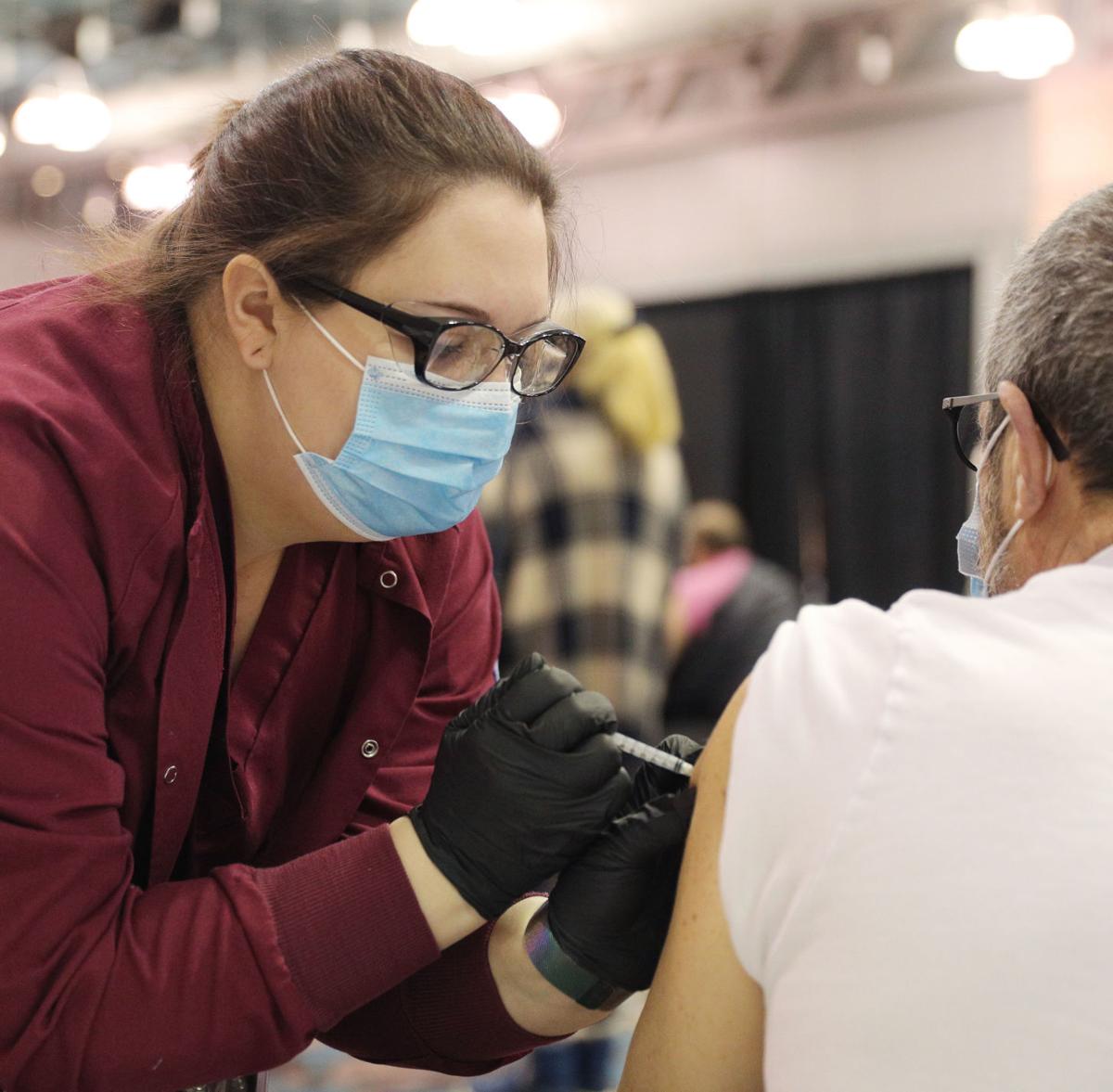 Kristin Vola, a nursing student from Atlantic Cape Community College, administers shots of the COVID-19 vaccine March 4 at the Atlantic City Convention Center. The New Jersey Education Association this week said it would support a vaccine mandate or testing requirement for educators.

Gov. Phil Murphy on Monday announced all school and state employees, including those at public colleges, will be required to be vaccinated by Oct. 18, or undergo at least weekly testing.

“As the school year rapidly approaches, we’re continuing to do all we can to ensure a safe start to the school year. Strong masking and vaccination protocols, in tandem with other safety measures, are our best consolidated tool for keeping our schools open for full-time, in-person instruction, and our educational communities safe,” Murphy said Monday during his weekly COVID-19 response briefing from the Trenton War Memorial.

Murphy, who was joined by Department of Health Commissioner Judy Persichilli, State Epidemiologist Dr. Christina Tan, and State Police Superintendent Col. Patrick Callahan, said the executive orders he was signing applied to all individuals who work at a school or for the state, including part-time workers such as bus drivers, school food service workers and state contract employees.

“We expect that district leaders will work collaboratively and directly with local union leadership on smoothing out operational or other logistical aspects, especially if there is a need for larger scale testing of workers over the next couple of months,” Murphy said.

The New Jersey Education Association said it would support a mandate from the state requiring educators be vaccinated or tested regularly for COVID-19.

“From the beginning of the COVID-19 pandemic, we have called for following the guidance of public health officials to keep the students and staff in our public schools safe. Gov. Murphy has been a great partner in that effort to ensure that our students continue to learn and grow while remaining as protected as possible,” the statement reads. “Today’s executive order, which requires school employees either to be vaccinated against COVID-19 or to undergo regular COVID-19 testing, is another example of Gov. Murphy’s unwavering commitment to the health and safety of NJEA members and the students we serve.”

According to Murphy, state and federal funding is available to help districts provide vaccines or testing to employees. He said that in June, the Department of Education, working with the Department of Health, issued guidance to schools on implementing COVID-19 testing, and that the DOE will also be offering a free program through which districts can conduct testing.

“While schools have already been notified of this upcoming program, more details will be released soon,” Murphy said. “At the state level, we will continue to work closely with state officials on the implementation of this order. Now, we do not believe that meeting this order will be especially hard to do.”

He said he has received local reports that an overwhelming majority of faculty have already been vaccinated.

Murphy’s gubernatorial election opponent, Republican candidate Jack Ciattarelli, called Murphy’s executive order for school employees “both hypocritical, and evidence that powerful Trenton special interests get to play by one set of rules, while the rest of us are forced to play by another set.”

“Specifically, why is Governor Murphy willing to find common ground on a flexible vaccinate or test policy with the teacher’s union, but not willing to do the same with parents who oppose his mask mandate for K-12 students?” Ciattarelli said. “The answer, of course, is simple: average parents don’t run a powerful union that funneled $10 million in dark money to benefit the Governor’s campaign. The NJEA did, so they get to cut a deal. Parents did not, so they are told what to do without any recourse.”

As of Monday, 5.5 million New Jerseyans have been fully vaccinated against COVID-19.

There were 1,443 new positive PCR tests reported and 316 new positive antigen tests, as well as three new COVID-related deaths as of Monday afternoon.

Persichilli said that vaccinating children 12 and older is a priority as the positive cases rise and the school year begins.

“We are in a race against time,” Persichilli said, of the spread of variants of COVID-19 such as delta, which is more contagious than the original strain of the virus.

The Department of Health is working with municipal health and school officials on a “major back-to-school push” to expand vaccine access for adolescents, Persichilli said. She said that part of that push is 120 popup and 20 static sites located in schools and expanding the Pfizer vaccine to vaccine sites located in close proximity to schools. Atlantic City and Vineland are among the schools that have vaccine sites set up already, she said.

Persichilli also urged pregnant women to get vaccinated as they are at an increased risk of severe illness.

There continues to be a limited number of COVID-19 “breakthrough cases” among the vaccinated.

Murphy’s latest executive order follows two signed on Aug. 6 in response to the recent increase in positive cases. The first mandates that state health care workers and those who work in congregate settings or long-term care facilities be vaccinated or undergo weekly or biweekly testing starting Sept. 7. The second requires masks for anyone entering a preschool, elementary or secondary school until further notice.

In his briefing Monday, Murphy took aim at those who do not believe children can get sick or spread COVID-19, citing data from the federal Department of Health and Human Services of a reported daily average of 1,234 patients with COVID-19 under the age of 18 hospitalized across the United States.

“Yet some continue to mistakenly and dangerously grasp at the lie that kids can’t get COVID, or they can’t spread COVID, neither of that is true,” Murphy said.

Children 11 and under are not eligible to receive the COVID-19 vaccine yet.

The American Academy of Pediatrics data shows a significant increase in new positive COVID-19 cases nationwide among children 18 and under, at 180,175 for the week of Aug. 12, a number not seen since January when pediatric cases peaked at 211,000. Children make up about 15% of all COVID-19 cases, but are far less likely to be hospitalized, about 2%, or die, .01%, the data show.

The U.S. Centers for Disease Control states that the true infection rate of COVID-19 in children is not known “due to lack of widespread testing and the prioritization of testing for adults and those with severe illness.”

Could you eat this 2.2 pound burger?

Could you eat this 2.2 pound burger?

PLEASANTVILLE — The community is invited to a family carnival and resource fair hosted by the local school district Wednesday.

SEASIDE PARK — A borough teenager has been sentenced to 36 months of juvenile probation after carrying out a shooting and robbery last year, t…

TRENTON — A high school science teacher from Egg Harbor Township, a Cape May kindergarten teacher and a preschool teacher in Upper Deerfield T…

SOMERS POINT — During summers off from school, some kids go on vacation. Others go to camp.

With COVID-19 booster shots coming, some 'megasites' could reopen

Gov. Phil Murphy anticipates that in about three weeks the state will begin giving COVID-19 vaccine booster shots, and will likely reopen vacc…

The state has made $267 million in federal funding available to pay for school districts’ routine testing of unvaccinated students and staff, …

VINELAND — Police are looking for the driver of a car that struck an elderly pedestrian Thursday morning.

Despite decreases in the COVID-19 death rate because of improvements like vaccines, the new disease is still killing at four to five times the…

Gov. Phil Murphy continues to receive positive marks for his handling of the COVID-19 pandemic, a new poll finds, although some feel his admin…

U.S. health officials have announced plans to dispense COVID-19 booster shots to all Americans to shore up their protection amid the surging d…

STAFFORD TOWNSHIP — School leaders here are asking Gov. Phil Murphy to let them make the final call on whether students and staff need to wear…

TRENTON — As COVID-19 cases rise again in the state, a memo last week from the Department of Education advised school administrators to offer …

The report, released Wednesday, states that “more than 6 in 10 (63%) of all parents of children who attend school think their child’s school s…

GALLOWAY TOWNSHIP — Stockton University on Thursday announced that beginning Monday, all students, employees and visitors to the college’s cam…

All students and school employees will be required to wear masks in schools statewide when the 2021-22 school year begins, Gov. Phil Murphy sa…

Stockton University says employees must be vaccinated against COVID-19

GALLOWAY TOWNSHIP — Stockton University will require its employees to be vaccinated against COVID-19 before Sept. 1, President Harvey Kesselma…

AtlantiCare nurse Eileen Xu gives Miriam Ramos, of Pleasantville, a dose of the COVID-19 vaccine in January at the Atlantic City Convention Center.

Kristin Vola, a nursing student from Atlantic Cape Community College, administers shots of the COVID-19 vaccine March 4 at the Atlantic City Convention Center. The New Jersey Education Association this week said it would support a vaccine mandate or testing requirement for educators.