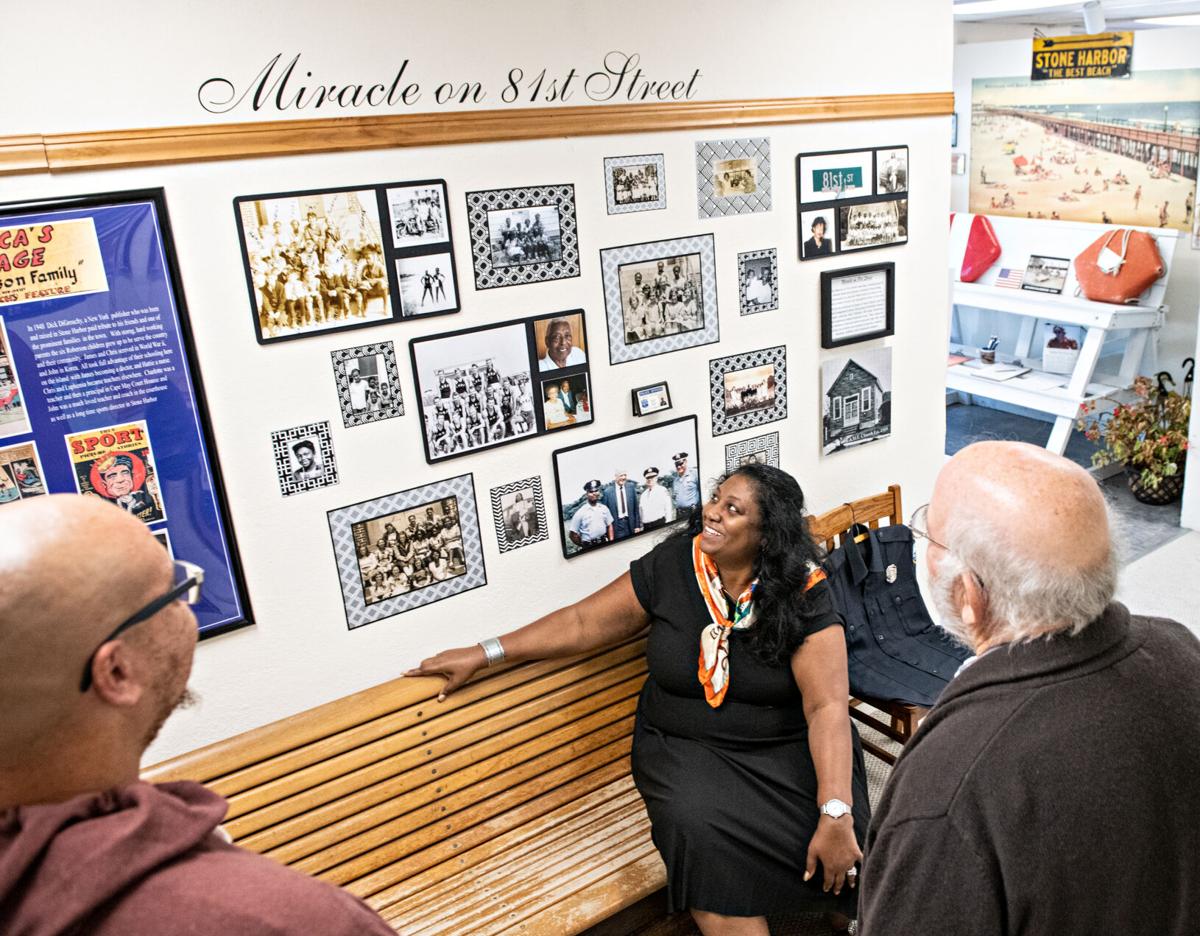 Angela Rodriquez Moore, center, looks up at a wall of images of the community through the years at the Stone Harbor Museum. Rodriquez Moore is listed as a producer on the documentary “Miracle on 81st Street.”

A still from “Miracle on 81st Street” shows Black children integrated into a Stone Harbor school.

STONE HARBOR — “Miracle on 81st Street,” a new documentary about a small Black community in Stone Harbor, begins with a closeup of Gerald Anderson talking about a common reaction when he tells people about his family.

They often tell him they did not know there were any Black people in the wealthy seaside community.

“Well, ’cause you’re not looking for them. Simple as that,” he replies to the camera.

Directed by Jim Talone, the hourlong documentary covers a century of Stone Harbor history, centered on multiple families who lived in a tight-knit community close to the border with Avalon.

The documentary grew out of a project completed with the Stone Harbor Museum about six years ago, covering several aspects of the history of the borough. While he worked on that project, several people suggested he should include details on the Black community, Talone said.

“At the time, I said no. We didn’t have any contacts. Most of the people had left,” Talone said. “That bothered me that we couldn’t tell the tale.”

That was before he connected with Anthony G. Anderson and Angela Rodriquez Moore, who both have family connections to Stone Harbor. Both are listed as producers on the documentary.

“This idea was Jim’s alone,” said Anderson. But he said he and Rodriquez Moore helped guide the project and make connections.

Anderson is a lifelong resident of Middle Township who spent childhood summers with his grandparents on 81st Street. He is Gerald Anderson’s nephew. Even now, he said, people react with surprise when he tells them he’s of the Stone Harbor Andersons.

The community’s roots go back a century, when workers brought their families to live on the barrier island as it was being developed as a resort along the rail line from Philadelphia.

Narrated by the Rev. Douglas Moore, the film says there were few homes yet in Stone Harbor, and many of the roads had not been completed.

“Land all over Stone Harbor was cheap, but especially so north of 83rd Street,” Moore said in the documentary.

It was a perfectly nice summer at the Jersey Shore. So why did people spend so much time complaining?

OCEAN CITY — It was, truly, the summer of their discontent.

Multiple Black families built houses on and around 81st Street. For the most part, the men worked as laborers, often taking odd jobs after leaving their full-time jobs for the day. Most of the women worked cleaning houses or doing laundry. All of them worked long and hard, according to those interviewed for the film.

Their children and grandchildren worked as teachers, medical professionals and in many other industries.

That’s part of what inspired both Anthony Anderson and Talone about the project, they said in separate interviews. While many stories about Black communities focus on hardship and hatred, the story in Stone Harbor includes acceptance and community.

Many of those interviewed described friendship and cooperation with their white neighbors as they grew up.

“It was exciting to hear,” Anderson said.

“It’s not about all of the horrors or Tulsa and so many other stories,” Talone said, referring to a massacre in Oklahoma a century ago when a white mob destroyed a prosperous Black community. “This is one of the stories you don’t hear. This is the quiet side of things that doesn’t get talked about.”

Many of those interviewed described Stone Harbor as an almost perfect place to grow up.

That doesn’t mean racism did not exist. The release of the film “Birth of a Nation” spurred a rise in activity from the Ku Klux Klan into the 1920s, the documentary reports.

A list of events planned on the Boardwalk included a baby parade one day and a KKK rally the next. During segregation, Blacks were restricted to a small section of the local movie theater, and a restaurant that would serve Black customers had an unwritten rule, but a strict one: They could only get takeout, and had to come around the back entrance.

Today, Stone Harbor is a prosperous, predominantly white community, with a median home price of $2.8 million. Census data put the median age in town at over 60 and the white population at more than 97% of the year-round community.

According to Anderson, Black families still own several of the houses on 81st Street and may visit for a week in summer, but mostly they are used as vacation rental income properties.

“There’s no longer a community there at all,” Anderson said. “It is gone in Stone Harbor, and most people don’t even know it was there.”

Run for the Fallen returns to Cape May County

The 13th annual Run For The Fallen is set to step off from Cape May County later this month,…

Some took advantage of rising property values and sold, but Anderson said a lot of it was just spreading out, with people moving to Whitesboro, Cape May Court House, Philadelphia or Virginia. Fewer and fewer people now have firsthand knowledge of the 81st Street community.

“That’s why we’re highlighting this while we still have these people. Some of the people that we interviewed are in their 90s,” Anderson said. Some included in the film have died since their interviews, including his uncle, Gerald Anderson, who died in September.

Even when he visited Stone Harbor as a child in the 1950s, Talone said, he knew little about the Black community in town. He said many didn’t know it was there at all.

There were few records of the community in local media.

“While nearby Whitesboro was a planned community, 81st Street grew up gradually with little fanfare,” the narrator states in the film. Middle Township’s majority-Black Whitesboro community was created while Jim Crow laws were bringing fresh oppression to Blacks in the South. Other local areas, including Ocean City and Cape May, also had predominantly Black neighborhoods through the early 20th century and beyond.

Now 77, Talone has been making documentaries for about 10 years. He is a retired English teacher, who taught for about 40 years in the Delaware Valley Friends School and at Radnor High School.

He lived in Stone Harbor after his retirement and got involved with the Stone Harbor Museum, he said. He now lives in Cape May Court House.

Several of the stories in the film inspired him, he said, including that of the Roberson family, whose mother was determined that all of her children would receive an education. Their story was told by Stone Harbor native Dick DeGrouchy in a format that would now be described as a graphic novel, included in the May 1948 issue of True Sports Picture Stories.

Talone said he sought to allow the community to speak for itself.

The film was shown recently at the Stone Harbor Museum. Both Talone and Anderson said it received a warm reception. It can also be seen on YouTube. Talone said he hopes to bring the story to a wider audience.

Watch 'Miracle on 81st Street,' and hear from some of the people involved in the making of the documentary, at PressofAC.com.

“Miracle on 81st Street,” a new documentary, tells the story of a small Black community in Stone Harbor.

Officials have decided guards will not train on or use the boats for at least the remainder of the year.

Angela Rodriquez Moore, center, looks up at a wall of images of the community through the years at the Stone Harbor Museum. Rodriquez Moore is listed as a producer on the documentary “Miracle on 81st Street.”

A still from “Miracle on 81st Street” shows Black children integrated into a Stone Harbor school.