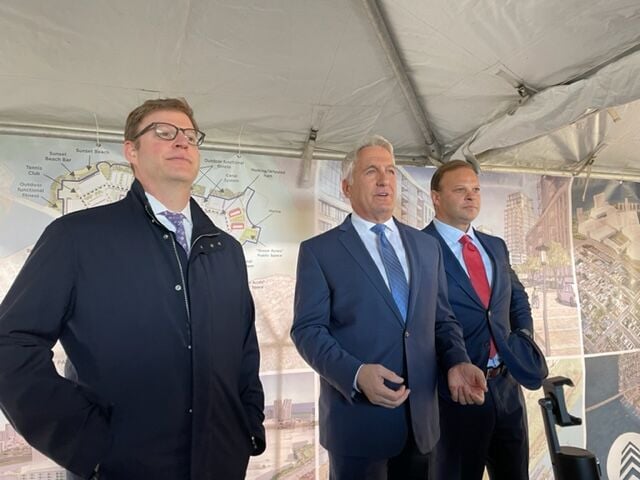 A housing proposal for Bader Field, called Casa Mar, would include canals modeled after those in Venice and Amsterdam. The city and the state are considering multiple plans for Bader Field. An illustration of the entrance to Atlantic City along Route 40 (Asbury Avenue) with proposed housing development Casa Mar as envisioned by Bart Blatstein of Tower Investments. Casa Mar would include 10,000 rental housing units, and take 12 years to fully build. A map of “Casa Mar” rental housing development proposed for Bader Field in Atlantic City during a press conference held by by Bart Blatstein on Monday. 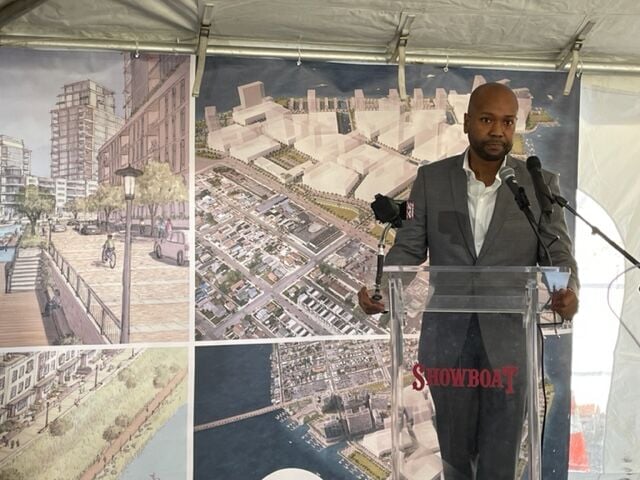 Tower Investments President Brandon Dixon stands in front of renderings of a planned residential development at Bader Field at a press conference Monday at Showboat Hotel.

The $3 billion plan calls for building 10,000 units of rental homes aimed at mid-market, and 400,000 square feet of retail and office space, along with 20 acres of open, recreational space and trails at the former airport.

But Blatstein’s “Casa Mar” vision faces competition from a $2.7 billion DEEM Enterprises proposal, unveiled in February, to build a “car-centric” luxury development there including housing and a race track for owners of race cars to take their vehicles to speed.

“I’m a huge supporter of Bart Blatstein. I’m just excited Bart and others have their eye on Atlantic City,” Mayor Marty Small Sr. said when contacted after the press conference. “I let him know an MOU between the city and the other project is imminent.”

Blatstein said he wasn’t very familiar with the DEEM plan, but called on the state to make its process of choosing a developer for Bader Field open and transparent.

DEEM is based in Los Angeles and Atlantic City.

A spokesperson for the state Department of Community Affairs, which oversees the state takeover of Atlantic City, did not immediately respond to a request for comment.

Blatstein called DEEM’s plans “impractical” and said mid-market housing is what is needed.

“Atlantic City is a wonderful town. It is lacking in one thing — population,” Blatstein said.

Dan Gallagher, one of DEEM’s partners, confirmed that his company expects to sign an agreement with the city in the near future.

“We are aware of (Blatstein’s proposal) and we’re moving forward,” Gallagher said. “We’ve been active for over two years, making public presentations, we’ve been before the city council, we’ve been to the state. We have a lot of time and money in the due diligence for this.”

Tower Developments is teaming up Post Brothers on the proposed development.

“Our two companies have created billions of dollars of development over the years and currently have joint ventured over a billion dollars in residential development in Philadelphia,” Blatstein said.

If approved, it would be the highlight of his career and probably his last major project, he said.

Tower Investments President Brandon Dixon said the plan is to charge rents similar to those charged for apartments at Showboat.

Blatstein said the project is designed to embrace the water surrounding it, and would have canals inspired by Venice and Amsterdam.

It would include 400,000 square feet of office and retail space, and have 20 acres of trails, parks and amenities open to the public.

“This will not be a gated community,” said Michael Pestronk, CEO of Post Brothers.

The project would be developed in five phases over 12 years, and local residents would be recruited to help build it, according to Blatstein.

The entire site would be raised 6 feet and the first phase would take about three years to complete and include 2,500 to 3,000 homes.

City Council Vice President Kaleem Shabazz attended the press conference and said he hasn’t seen enough detail about the proposal to comment on it specifically.

“I am for whatever is best for the city of Atlantic City,” Shabazz said, “whatever will get the most ratables, is most financially feasible, and meets all the criteria for the permits.”

Blatstein is now building the $100 million indoor ISLAND Waterpark, scheduled to open in 2023. It is under construction next to the Showboat Hotel, and the press conference was held in a tent on the construction site.

Bader Field is currently owned by the city and any project would also need state approval.

The proposal is but the latest in a string of plans for the 143-acre site, which is owned by the city but controlled by the state under a 2016 takeover law giving state government power over most of Atlantic City’s major decisions.

Bader Field, which closed in September 2006 after 96 years of aviation use, gave the world the term “airport.”

Showboat rooms to be converted to studio apartments

ATLANTIC CITY — More than 300 hotel rooms on the Boardwalk will be converted into studio apartments under a proposal from Showboat Renaissance.

ATLANTIC CITY — The state won’t answer a simple question: Is it legally necessary for the city to hold a competitive bidding process to decide…

Atlantic City gives itself a 90% grade on performance in 2022

ATLANTIC CITY — The mayor and his department heads fulfilled about 90% of the promises made in last year’s State of the City address, accordin…

A housing proposal for Bader Field, called Casa Mar, would include canals modeled after those in Venice and Amsterdam. The city and the state are considering multiple plans for Bader Field.

An illustration of the entrance to Atlantic City along Route 40 (Asbury Avenue) with proposed housing development Casa Mar as envisioned by Bart Blatstein of Tower Investments. Casa Mar would include 10,000 rental housing units, and take 12 years to fully build.

A map of “Casa Mar” rental housing development proposed for Bader Field in Atlantic City during a press conference held by by Bart Blatstein on Monday.

Tower Investments President Brandon Dixon stands in front of renderings of a planned residential development at Bader Field at a press conference Monday at Showboat Hotel.