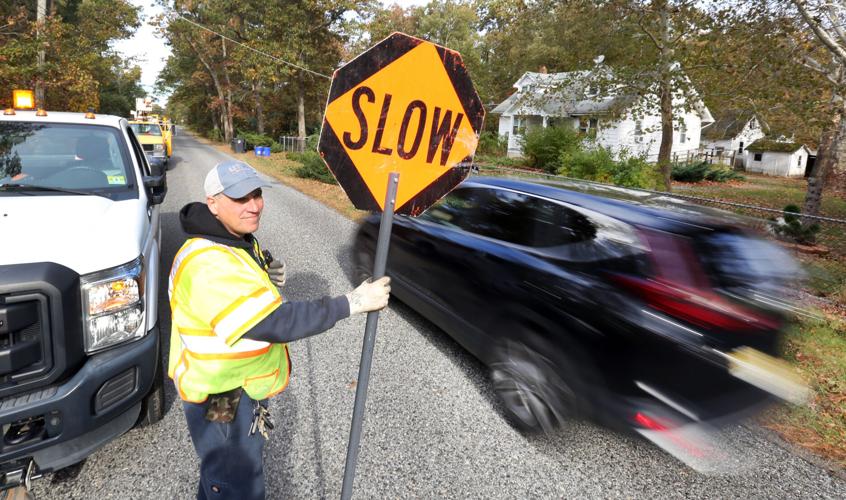 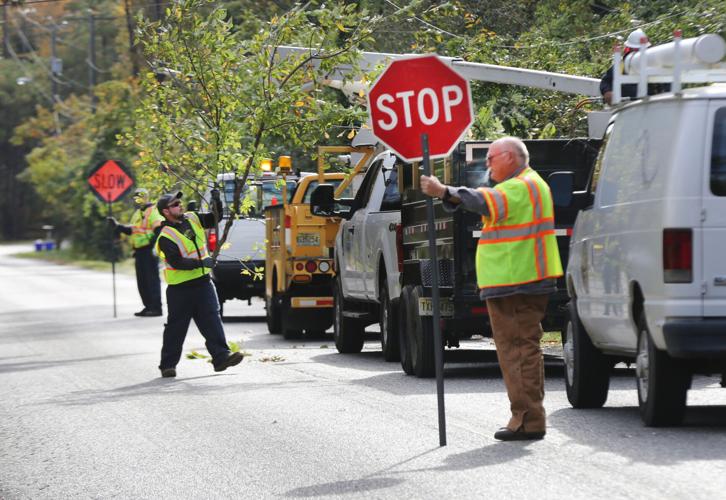 VERNON OGRODNEK For The Press

Wilbert was working on the side of the road with the Hamilton Township Public Works Department when he noticed a young motorist on his phone going 30 mph over the speed limit and heading right toward him.

“I had to dive out of the way at the last second or he was going to hit me,” Wilbert recalls. “Where I was standing was where he stopped.”

Wilbert, of Egg Harbor City, who is also a volunteer firefighter with the Laureldale Volunteer Fire and Rescue Company, is not alone.

Almost 90% of New Jersey first responders polled by a AAA survey said they have had at least one near-miss incident or felt their life threatened because motorists do not slow down or move over for those working along the roadside, despite the fact that New Jersey law requires them to do so.

It’s not only talking on cellphones but a bevy of other driver distractions like texting and driving aggressively, he added. And you can’t rely on motorists to act safely and slow down or move over.

On average, according to the AAA report, a first responder is killed every other week in the United States while working on the roadside.

“You have to protect yourself,” Nolls said about those working on the sides of roadways. “You have to play defense at all times. You can’t rely on the motorist to do the right thing. You have to go above and beyond. Educating the public is very difficult.”

“Rarely will motorists slow down or pull over,” said Joe Morris, a tow truck driver with A1 Affordable Towing in Pleasantville.

He believes motorists don’t know what to do. They’ve never been trained.

Matik spoke about the issue at a City Council meeting, which saw pleas for safety improvemen…

“You should, at least, move over to the other lane, but nobody even slows down,” Morris said of motorists he has seen in the 30 years he’s been driving a tow truck.

“You’re a sitting duck,” he adds. “People are flying by and coming too close. I don’t jeopardize myself. I protect myself.”

Protecting yourself appears to be the best thing first responders can do, even though a Move Over Law was passed in 2009. The law, which is on the books in all 50 states, requires motorists to slow down or move over a lane, if possible, when there is an emergency worker on the side of the road.

In New Jersey, the law carries a fine of $100 to $500, and that penalty increased in 2019, adding two points to the license of a driver convicted of a violation three times or more in a 12-month period.

Since its inception, more than 28,000 citations have been issued for violations of New Jersey’s Move Over Law, according to the state Division of Highway Traffic Safety.

Oddly, the findings of the first responders’ poll are in sharp contrast to an earlier AAA poll of New Jersey drivers — almost 90% of whom said they do slow down for first responders at the roadside and do move over a lane whenever safe to do so. But first responders say that is not what they are experiencing.

“It’s total lawlessness out here,” Morris said. “The law won’t save your life unless someone abides by it. People are oblivious to the law.”

This year, two AAA tow drivers have been killed while assisting motorists at the roadside, according to the AAA report.

But it’s not just first responders who are at risk. Since 2015, they say, more than 1,600 people have been struck and killed while outside a disabled vehicle.

The Move Over Law has come under criticism. An editorial in the Pittsburgh Post-Gazette said it may not be as safe as it sounds.

“While a last-minute lane shift on an empty highway may be reasonable, such that hitting the brakes is needed, add traffic to the situation and there could be mayhem,” says the editorial. “If a motorist can’t move over due to traffic,” it goes on to say, ”the same motorist may not be able to safely reduce speed by 20 mph. Slamming the brakes could create an unsafe situation: like a rear-end collision.”

In the meantime, those working along roadways are doing all they can to be proactive, defend themselves and watch each others’ back.

Holding a sign on Lombard Avenue in Hamilton Township with “Slow” on one side and “Stop” on the other, Jim Jensen is on the front line as drivers pass by him only feet away. The public works flag man spoke about his firsthand experiences with near-miss accidents and distracted drivers.

“It’s happened to me, multiple times,” he recalls. “A lot of it is cellphones. I know it is.”

Jensen says many drivers claim they don’t see him standing there wearing his bright, lime-colored vest and holding the 7-foot-tall stop sign.

Nolls says his Public Works Department has taken a proactive stance in dealing with the problem and increased the level of safety for its crews. Crews working roadside are required to wear bright, Class 3 safety vests, use two-way radios, learn hand signals, and use safety lighting on all vehicles that include LED strobe lights and crash attenuators that are placed in front of crews that absorb the impact of a vehicle.

“We have a saying with the fire department,” Wilbert said. “We want to go home. It’s harder and harder every day to get to that goal.”

Road crew workers express concern for their safety from distracted drivers in a video at PressofAC.com.

On a South Jersey military base, help for Afghan evacuees starting new lives

A cold wind ripped between the brick buildings of “Liberty Village,” the enclave of Afghan evacuees at Joint Base McGuire-Dix-Lakehurst, but i…

Trans women with violent past barred from Scottish female prison

Trans women with violent past barred from Scottish female prison