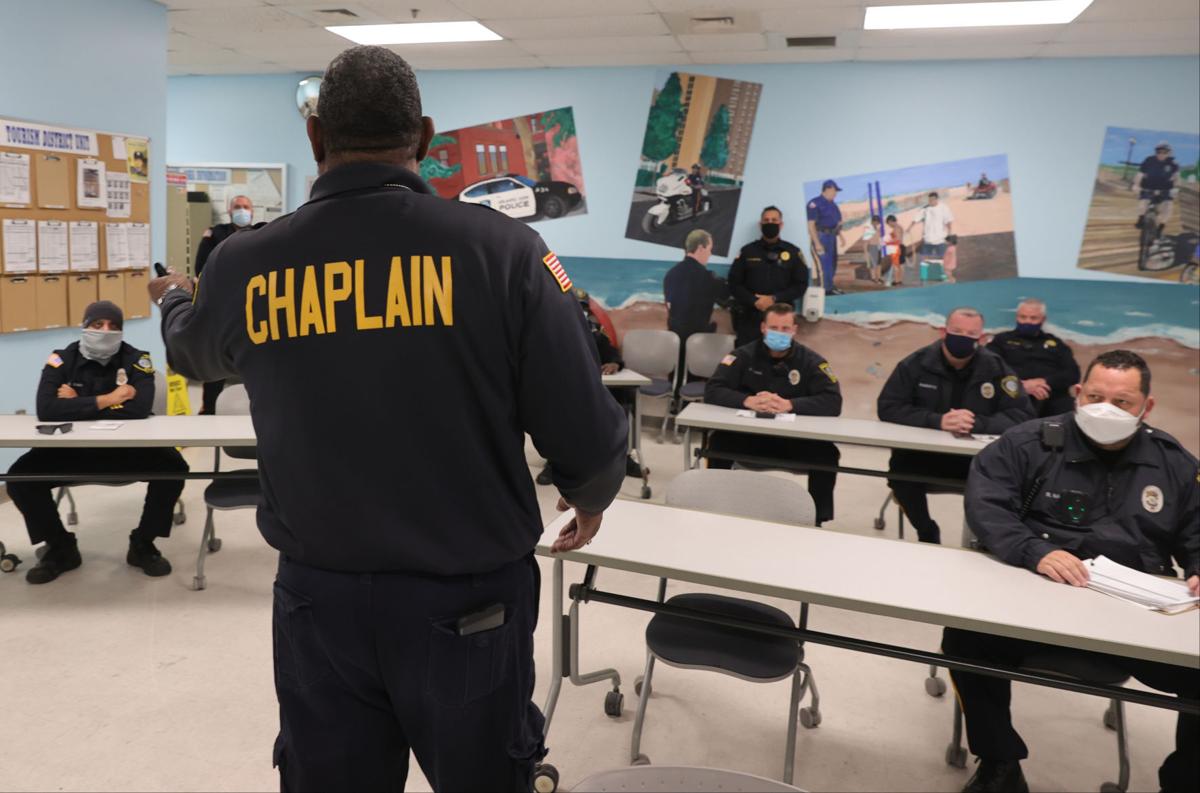 Atlantic City police chaplain the Rev. Eric McCoy addresses officers of the department’s Neighborhood Coordination Unit during their morning roll call. The department has more than a dozen chaplains on staff. 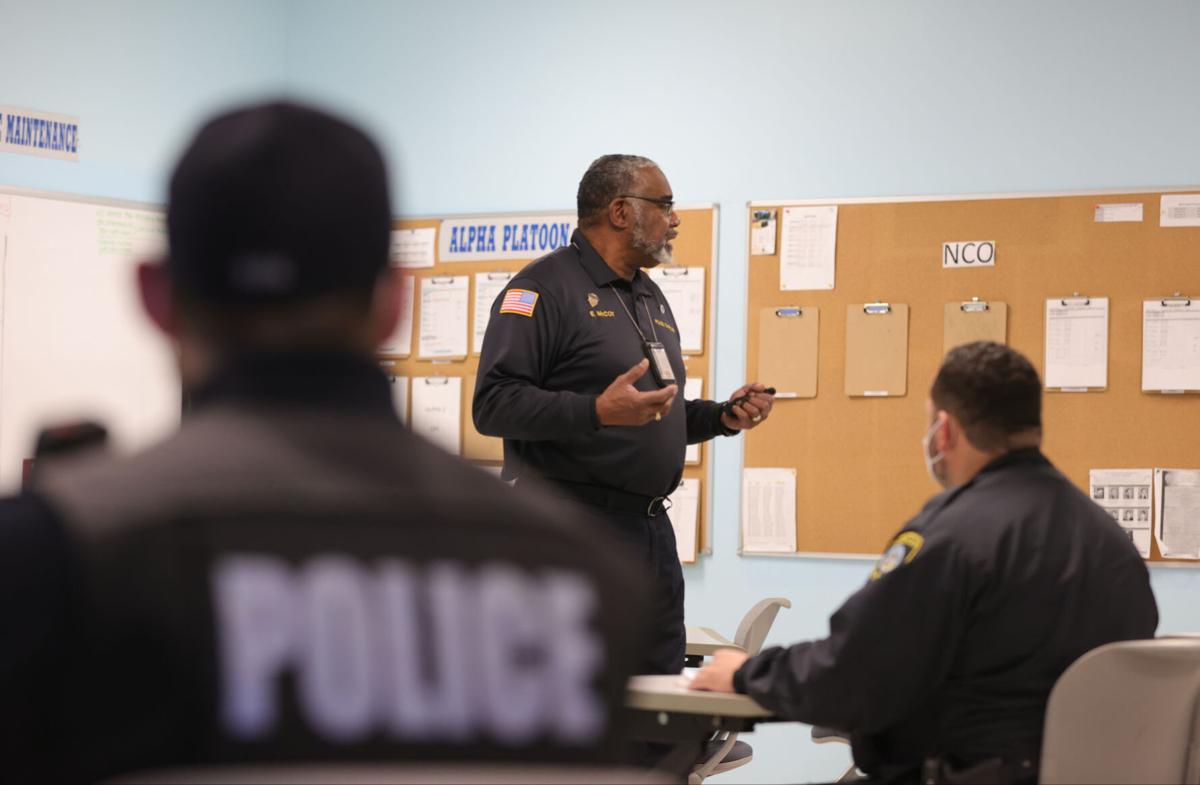 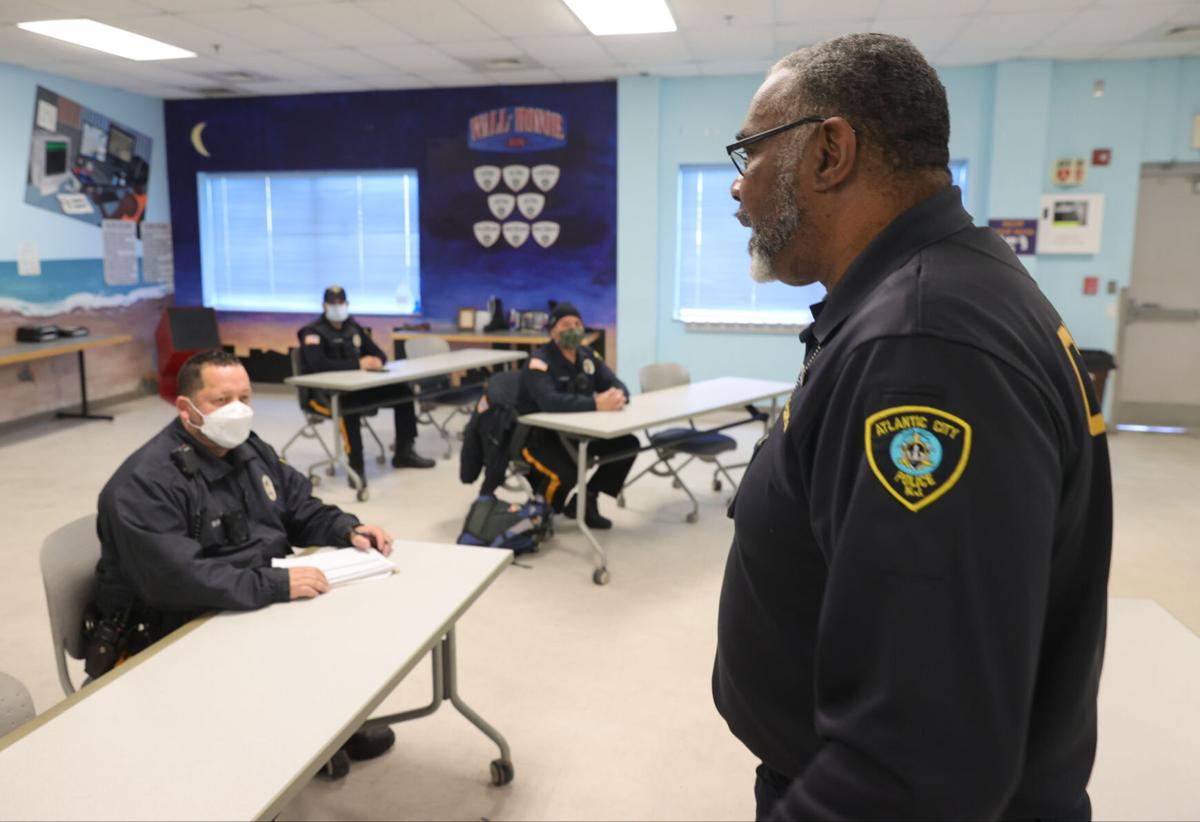 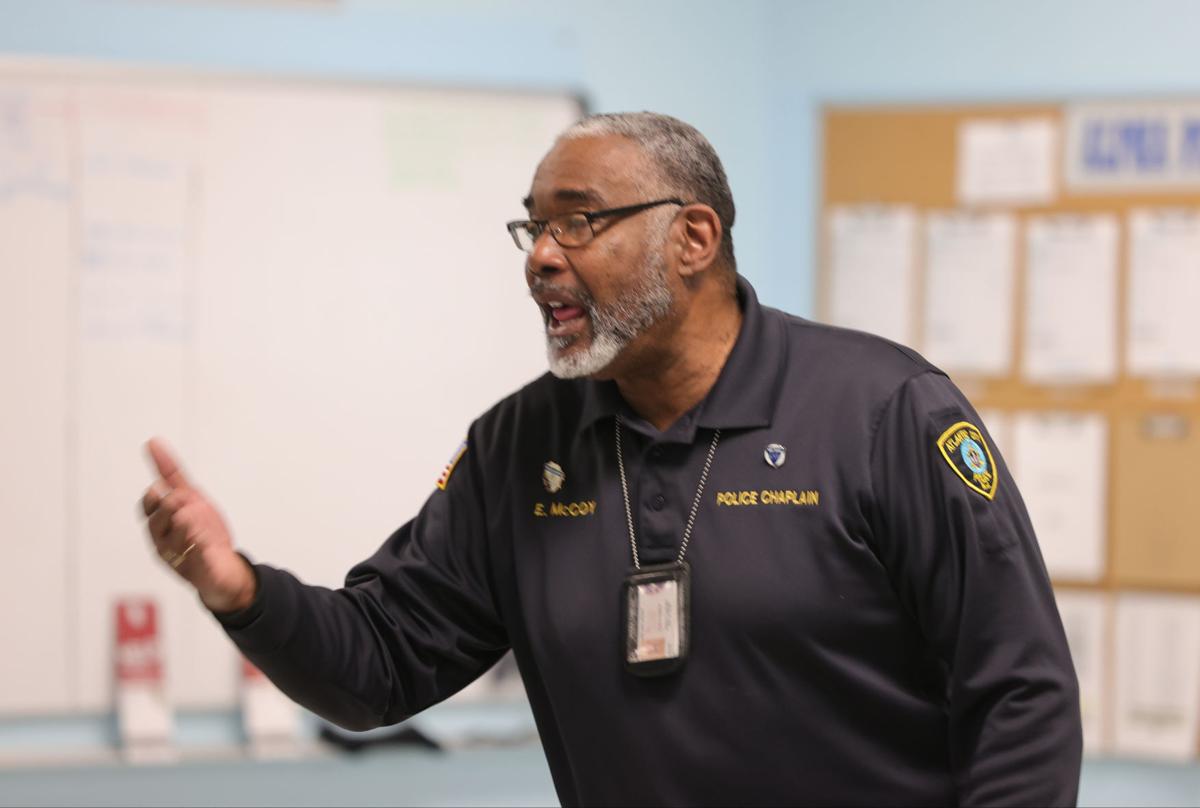 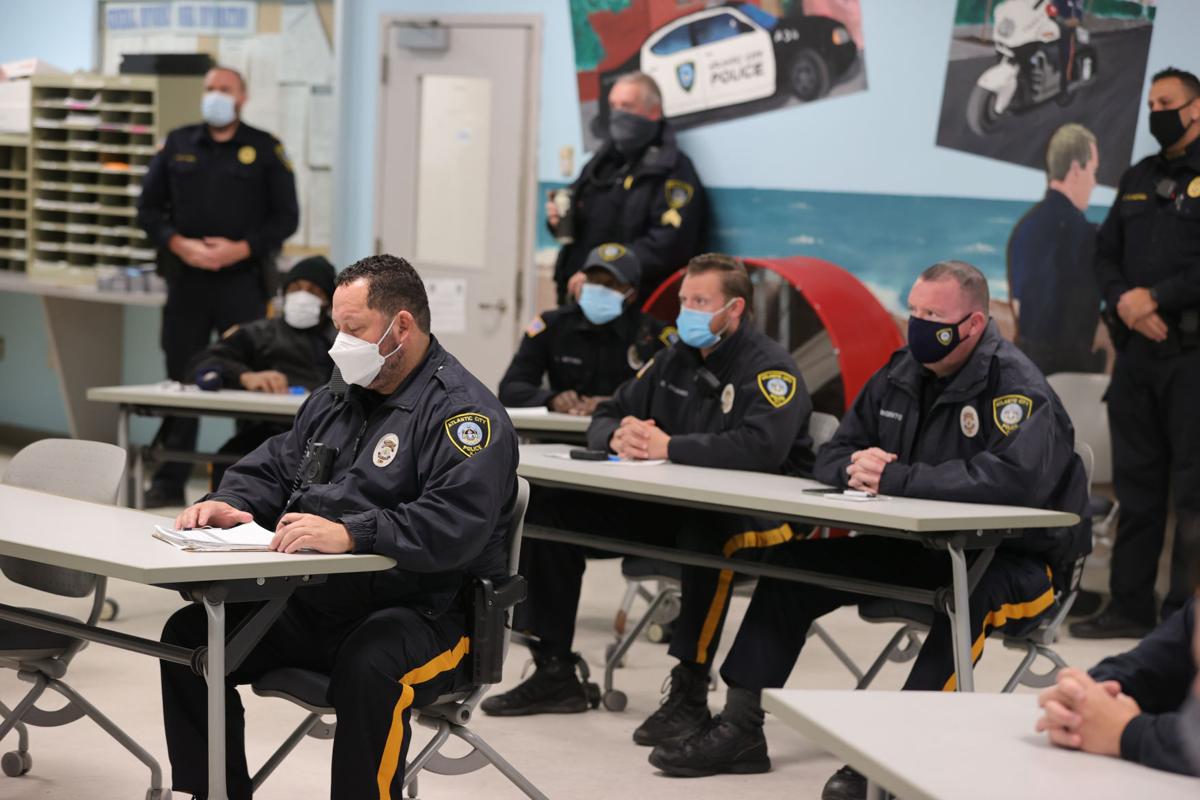 ATLANTIC CITY — The Rev. Eric McCoy isn’t a police officer, but for about a decade, he’s responded to drownings, shootings, suicides and other emergencies all over the resort.

He’s worked in juvenile diversion, gang mediation and sorted out conflicts between students at city schools.

At least once, a resident approached him at a crime scene, reading the bright yellow letters across the back of his uniform, mistaking him for a police captain, but he was quick to correct them — he’s a chaplain.

“The department has used us to bring comfort into a situation when there’s chaos,” McCoy said. “By us being there, we’re able to mediate any situation before it gets out of hand. ... We are a ministry of presence. That’s the biggest thing we do. We come, and we are present.”

The department has a robust chaplain program, with over a dozen currently on staff. Adopted through a 2012 ordinance, it’s a volunteer program, with religious leaders across denominations trained in crisis intervention, mental health and mediation that isn’t centered on a specific belief. They wear a uniform and a badge and are sworn in as honorary lieutenants.

But their role, officials said, is to act as a conduit between the police and the residents they serve, working to improve those relationships and acting as a source of guidance and support for officers and civilians alike.

Deputy Chief James Sarkos, who serves as the department’s officer in charge after Chief Henry White Jr.’s recent retirement, said the role of a police chaplain is to be a balancer.

“The police chaplain program was established to provide support for police officers and civilians who are stressed in either a social or emotional way,” Sarkos said. “Police chaplains are there to provide appropriate assistance, advice, comfort, counsel and referrals to those in need, which request such support.”

When city police Officer Josh Vadell was shot in the head while responding to an early morning armed robbery in September 2016 with his partner, now-Detective Thomas McCabe, on Arkansas Avenue, chaplains were there to offer help.

“They were top-notch, very integral in my mental health, initially while I was in the ICU after the shooting,” Vadell said. “Just supporting me and my family.”

Vadell spent weeks in the hospital, underwent intense rehabilitation to relearn basic motor skills and retired from the department at age 30 as a result of his injuries.

“They were great,” said Laura, Vadell’s wife. “They were coming in every day, praying for us, asking if they can do anything for us. They really take into consideration your own culture and beliefs, and they’re really a comfort to be around. Just being present in that time for what you needed them.”

Like McCoy, Bishop Robert F. Hargrove II, president of the Fellowship of Churches of Atlantic City and Vicinity, has been with the program since the beginning.

Born and raised in the resort, he’s helped during domestic violence situations and death notifications, he said, working as an extension for police who sometimes have to quickly move on to the next emergency call.

“So the chaplain can do it and we can stay,” Hargrove said. “We bring a calm over the community while the officers do their job.”

The chaplains also have a station-house adjustment program for city youth charged with low-level, nonviolent crimes. If officials, parents and victims agree, a juvenile can complete a 90-day program that includes mentorship on the weekends, community service, anger management and essay-writing. If they comply, charges against them can be dropped.

But they’re also working when there isn’t an emergency, focusing on community outreach.

“What we try to do is offer our presence in the community when nothing is wrong, so that when something does and a call is made and we show up, they’re familiar with us,” Hargrove said. “It is significant for the program here, because we are trying to reinstitute — when I grew up in Atlantic City, it was a community. What the chaplains are bringing to the Police Department is a sense of community, and everybody has a role to play.”

They often work alongside the department’s neighborhood coordination officers. That program started in May 2019 after officials assigned two officers to each of the city’s six wards and four to community outreach.

“Nine years ago, and today, there’s a lot of shooting, hopelessness,” McCoy said. “The police officers were almost like the enemy instead of the hero everybody needs. We want to make the officer friendly again. We want people to come to them when they need something.”

Often, chaplains speak to officers during roll call at the start of their shift, offering their guidance and support, but also impressing on them — “Today, everybody’s going home,” he said.

“It’s a high-stress job, and they need us there to help process what they’re going through, what they might come up against,” McCoy said. “My mom told me one time, ‘No man is an island,’ meaning no one stands alone. Everybody needs somebody. Everybody needs someone to tell them it’s going to be OK. We’re the people that tell the people and the police officers.”

NOTE: Police believe the death of a man whose body was found early Monday morning hanging from a hotel balcony isn't the result of criminal activity.

ATLANTIC CITY — Police arrested six people, including a teen, during a drug investigation Wednesday that also led to the seizure of guns and d…

ATLANTIC CITY — Police and Jewish Family Service of Atlantic & Cape May Counties have received a $740,576 federal grant to improve public …

Atlantic City police chaplain the Rev. Eric McCoy addresses officers of the department’s Neighborhood Coordination Unit during their morning roll call. The department has more than a dozen chaplains on staff. 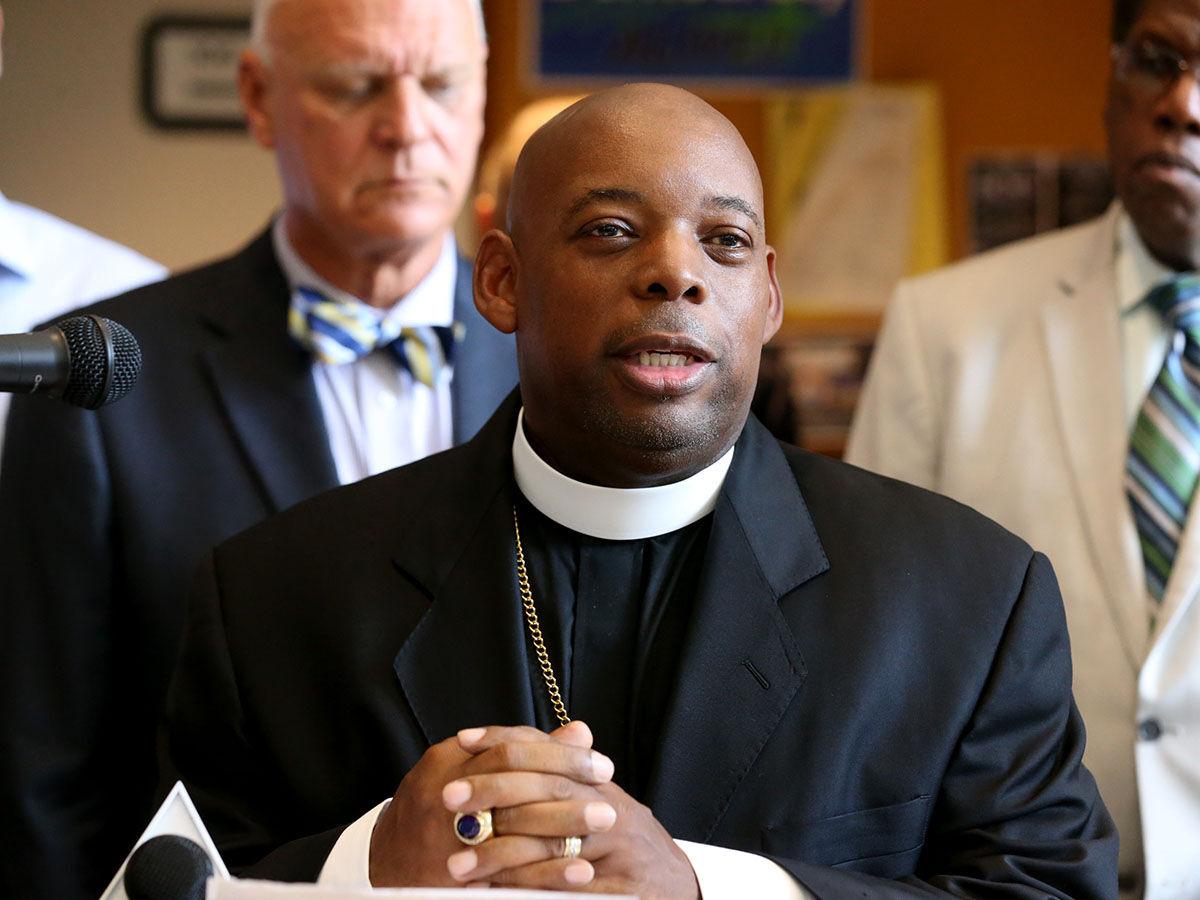