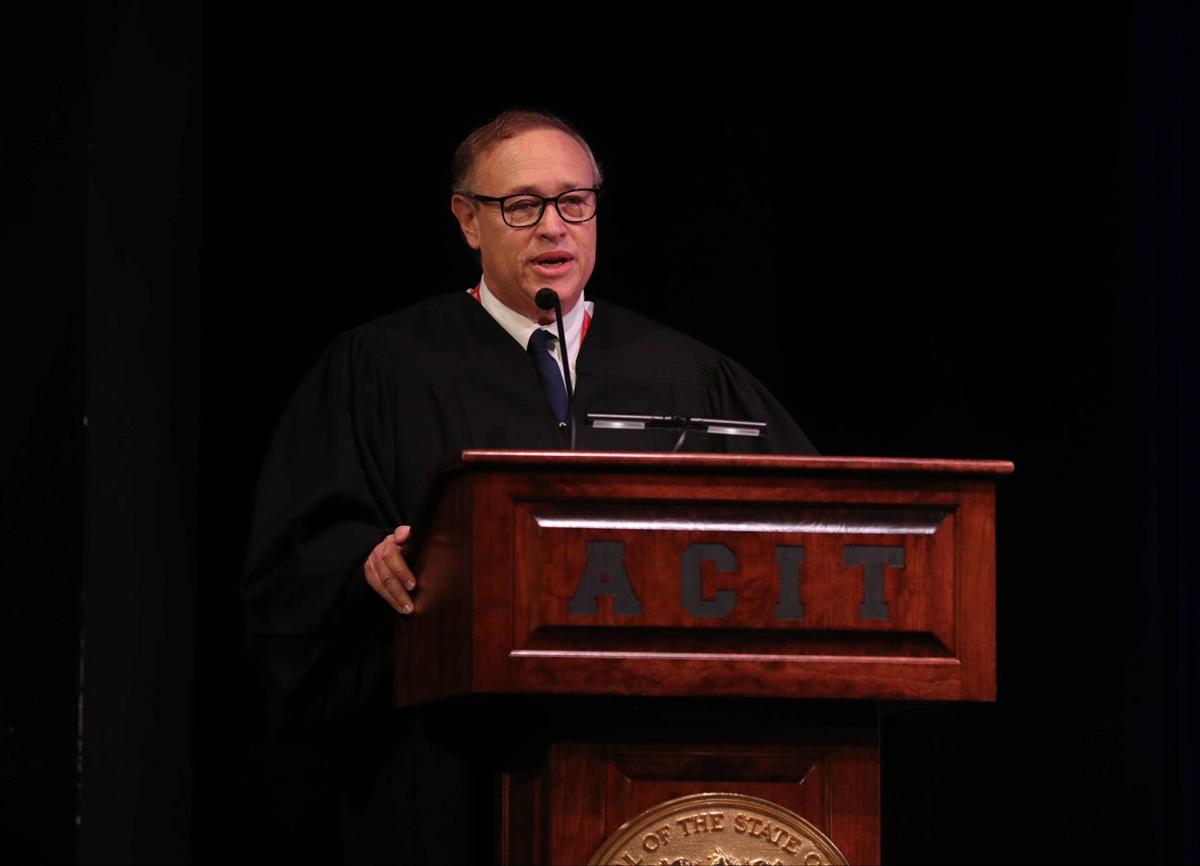 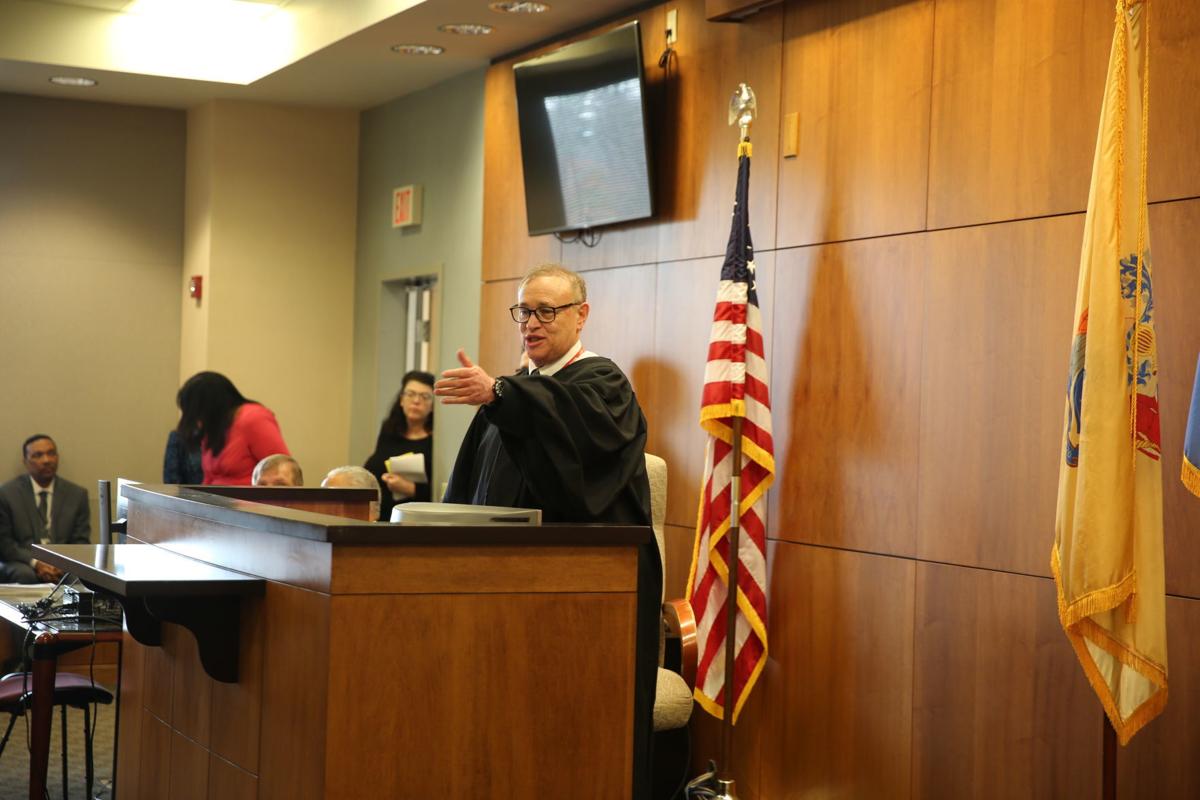 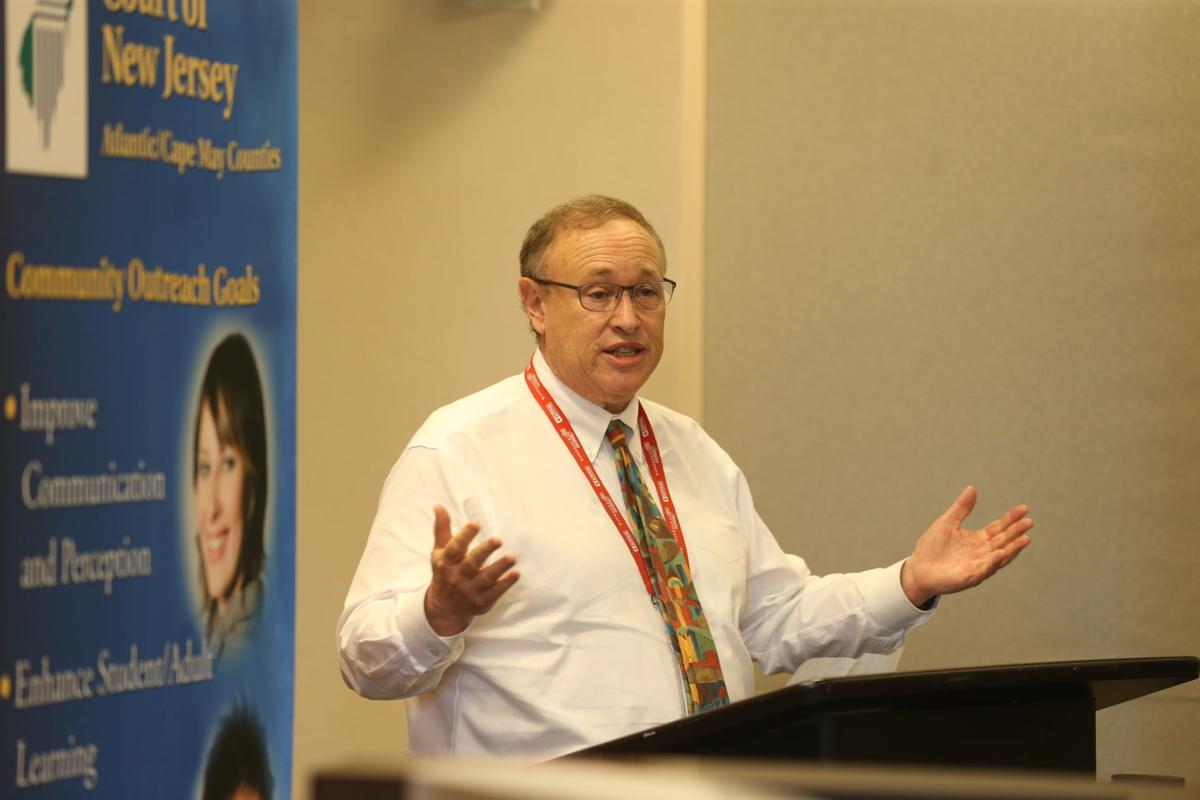 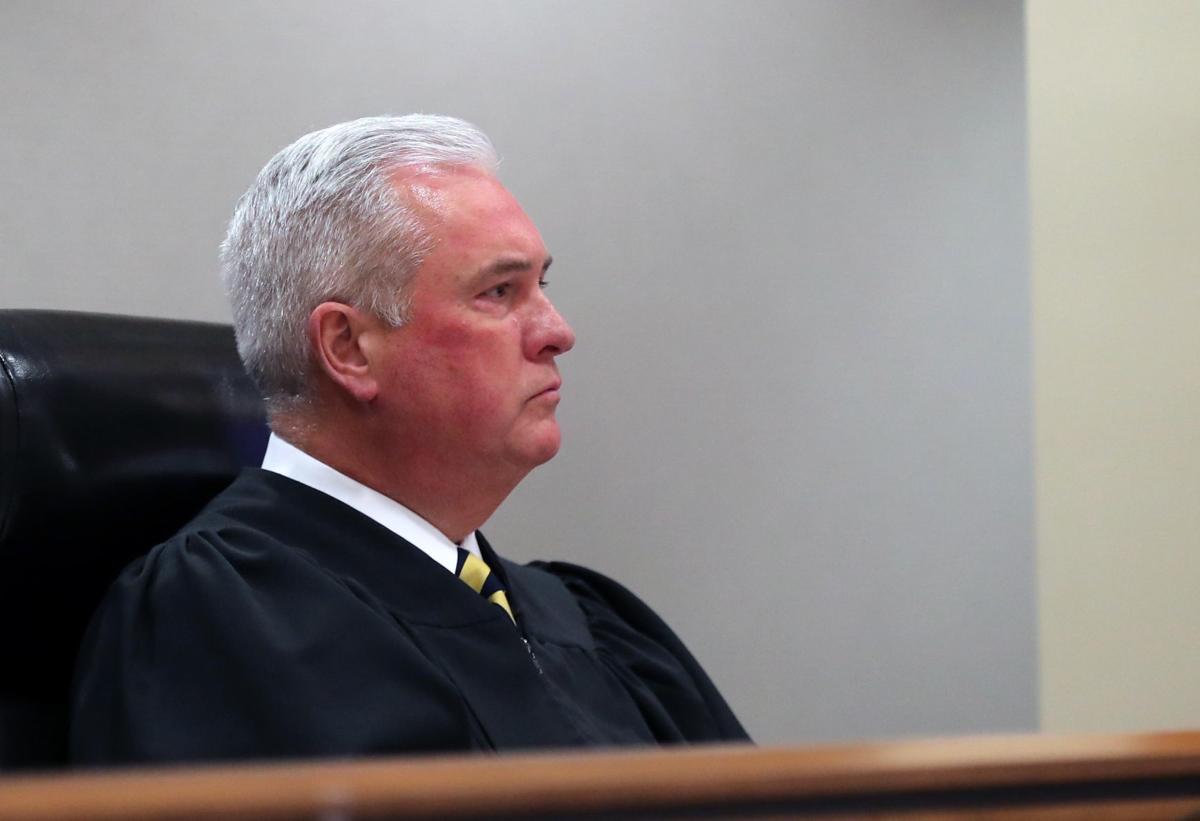 Superior Court Judge Bernard DeLury listens to Ferdinand “Freddy” Augello, 62, during his last words, which he was sentenced to life in prison for involvement in Kauffman murder Dec. 5, 2018 (Craig Matthews / Staff Photographer)

MAYS LANDING — Five years ago, Atlantic County Superior Court Judge Mark Sandson was working almost exclusively on mortgage foreclosures that wound their way through the courts after the 2008 financial crisis.

The county was “right in the bull’s-eye, the crosshairs of the center of this thing because of the disintegration of the gaming industry,” Sandson said.

But then, he moved over to leading Atlantic and Cape May counties’ drug court program, now called recovery court, because he was “looking for something with a little more hope,” he said.

“I was very, very motivated,” Sandson said. “Like everybody else — you talk to anybody in our society, and you ask them, ‘How have you been impacted by the addiction catastrophe?’ and almost everybody has people in their families, and I did too.”

Sandson’s last day on the bench was Nov. 9 — one day before his 70th birthday, the state’s mandatory retirement age for judges. While only the last five years of his decades-long career in the judiciary was spent working on the court’s impact on addiction and recovery in South Jersey, the changes and improvements he made to the program will not be soon forgotten.

He brought a particular humor and empathy to the bench, his colleagues said, as he worked with defendants, changed the very name of the program and worked tirelessly to get those in recovery stable jobs.

“It was very important, personally, to take over and see what I could do to make things better,” Sandson said. “I was extremely personally committed and I was determined to make some changes.”

After learning that employers weren’t exactly keen on having workers actively in a program called “drug court,” Sandson realized that the implications can lead to participants being stigmatized or minimized, he said.

“The old Shakespearean question is ‘What’s in a name?’” he said. “There’s a lot in a name.”

So, he changed it in 2017 after getting approval from state judicial officials.

“We want to stress getting good jobs, decent jobs, on the books with benefits,” Sandson said. “Living on the fringes of the community without a job on the books means you’re susceptible to anybody doing anything to you and you have very little, if any, recourse. And, very frankly, a lot of our people facing stigmatization of drug court wanted to get a good job.”

Nineteen counties across the state still use “drug court,” Sandson said, adding that he hopes that changes.

“We don’t do drugs, we do recovery,” Sandson said. “And what is recovery? It’s getting back all the things you left in your life of addiction.”

‘The only social program that works is a job’

But connecting defendants to jobs, and not just gig jobs, but decent jobs with benefits and stability, was next, he said. Sandson reached out to the local casino industry, convincing them to hire those participating in the newly renamed recovery court program.

He pitched his idea to officials and the casino industry responded, he said, getting jobs at each property in the resort. He also reached out to Stockton University, finding more jobs there and a scholarship for participants awarded each semester. He’s connected with Atlantic Cape Community College to work on a vocational program.

“This is the way out, along with treatment,” he said. “Treatment alone can be successful, but you have to give people hope that they’ll be able to make a decent living and not being the last person in every line — a job does that.”

Now, Cape May County Superior Court Judge Jeffrey J. Waldman will take over where Sandson left off, leading the recovery courts in both counties.

“I’m fortunate to build on the great foundation that Judge Sandson has put in place for our well-respected program,” Waldman said. “It’s our intention as a team, to carry on his tradition of innovation, dedication and immersion into the program and the lives of our participants.”

But, for Sandson, the work isn’t done just because he’s off the bench. He’s now vice chairman of the Judiciary Opportunities for Building Success, or JOBS, program.

But, in an extremely humble fashion that is typical of Sandson, he continuously shared credit for his achievements with fellow judges, county law enforcement, court staff and others who worked alongside him, saying simply, “it was the right job for me, and I think I did a decent job.”

Cape May County Prosecutor Jeffrey H. Sutherland described Sandson as “one of a kind.”

“The impact he made on the lives of the many people he helped guide through the Recovery Court process, even when they initially fought the system, is immeasurable,” he said. “The successes will be felt for generations as many of those individuals would not only have not graduated from Recovery Court and become productive citizens, but they likely would no longer be alive and their children and families would have had to live with their loss.”

“Judge Sandson brought common sense solutions to the very complex issues of addiction, dysfunction and mental illness challenges,” Tyner said. “He served with compassion and empathy. I worked alongside him as a judge and as the county prosecutor my lawyers appeared before him. I believe that the impact he has had on people throughout Atlantic County is immeasurable.”

Atlantic County Superior Court Judge Bernard E. DeLury Jr. said the community is lucky to have Sandson still working in the field during his retirement.

“Judge Sandson didn’t create drug court, but he certainly perfected it,” DeLury said. “He redirected the focus to recovery, even changing the name of the program in our two counties. He is a man of boundless energy, deep compassion and extraordinary vision. The recovery community is fortunate to have him continuing in the effort by joining the judiciary’s job’s program as the vice chairman.”

“Over the years, I have witnessed him transform the program into a supportive environment that promotes and celebrates the recovery journey,” she said. “He has impacted the lives of so many individuals throughout his time as a judge. He will be missed by all. I am honored to have worked beside him.”

“He has given the recovery court participants an opportunity to share their strength, hope and inspiration with the world,” Phillips said. “As a team member, I have learned so much from him over the years.  His dedication and enthusiasm for this work will continue through the existing team because of the knowledge he has shared with all of us.  It has truly been a privilege to work with him.”

Sophia Bradach, a freshman at Stockton University, created an experiment that is set for launch to the International Space Station on Saturday.

What's prime time look like at Atlantic City casinos? 'It's so discouraging.'

ATLANTIC CITY — It was Saturday night at Hard Rock Hotel & Casino Atlantic City, and all Joe Lupo could do was grimace. Last call had come…

MAYS LANDING — A 24-year-old Somers Point man has been charged with felony murder and other offenses in a Nov. 22 fatal shooting in Atlantic C…

30 recognized during virtual recovery court graduation in Cape May

MAYS LANDING — “I truly wouldn’t have been able to do it without you guys,” Ashley S. said Tuesday morning, starting to cry but wiping the tea…

Paul D’Amato started transitioning from working in his Egg Harbor Township-based personal injury law firm over two weeks ago, making sure that…

After serving in the Army for five years, Cape May County resident Tim Letts got injured, developed post-traumatic stress disorder and was dis…

Superior Court Judge Bernard DeLury listens to Ferdinand “Freddy” Augello, 62, during his last words, which he was sentenced to life in prison for involvement in Kauffman murder Dec. 5, 2018 (Craig Matthews / Staff Photographer) 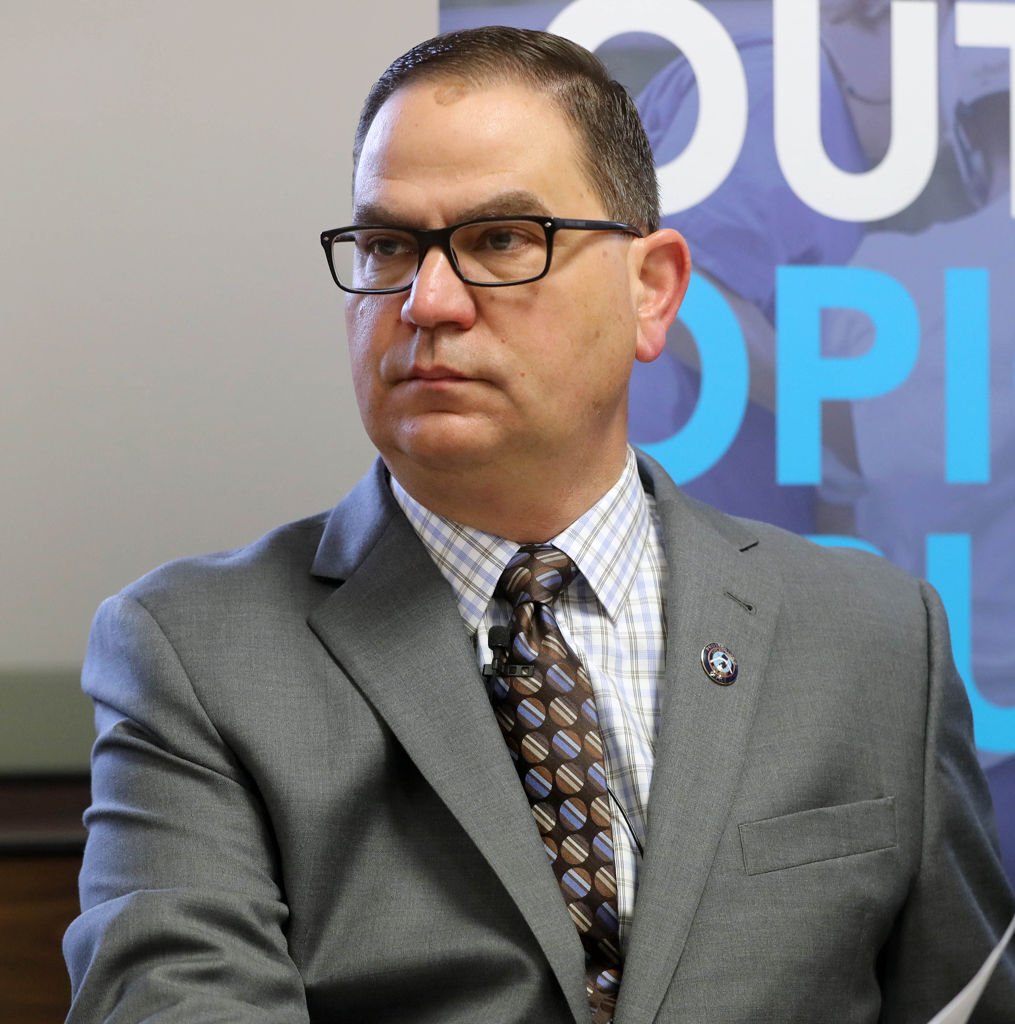