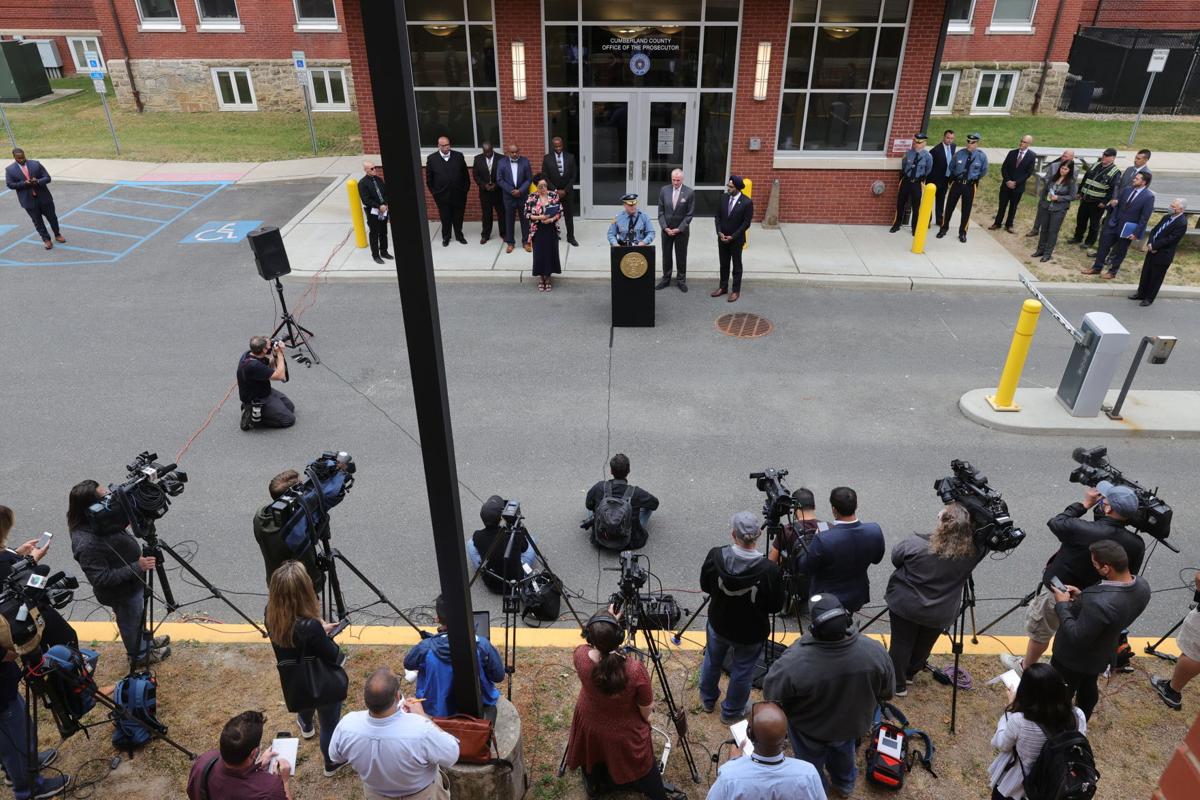 Col. Patrick J. Callahan of the State Police speaks Monday at a news conference in Bridgeton on the Fairfield Township mass shooting that killed a man, a woman, and injured 12 others at a house party Saturday night. 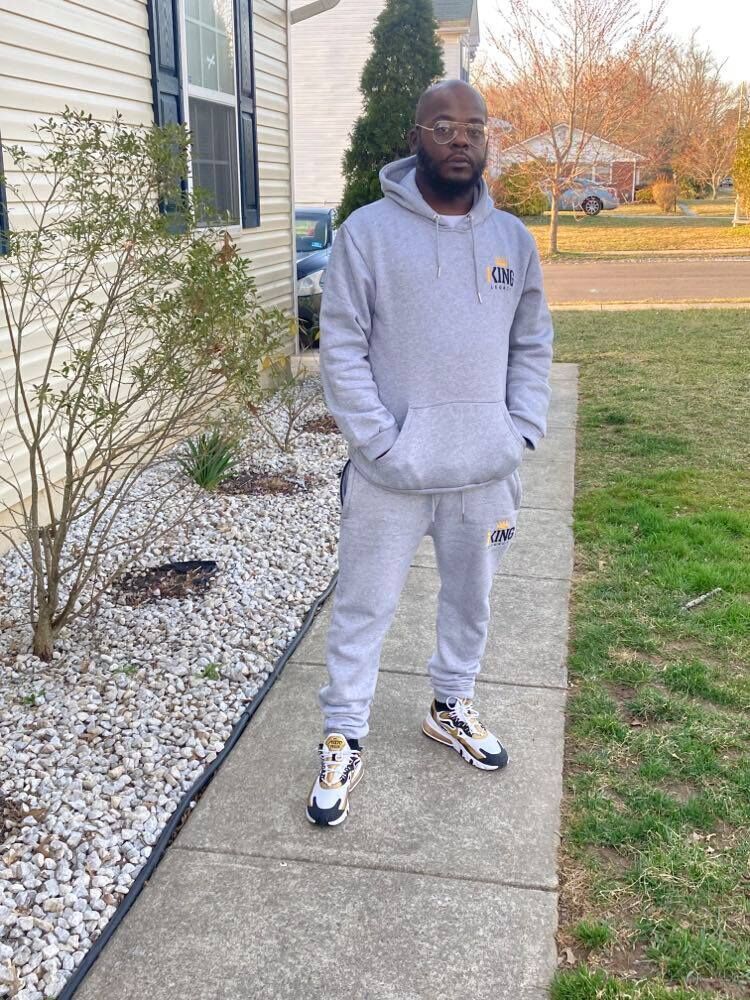 Terence Ridgeway performed CPR in an attempt to resuscitate one of the victims of Saturday night’s fatal house party shooting in Fairfield Township.

It was not the outcome anyone was expecting at the ’90s-themed birthday bash in Fairfield Township, which party host Darrell Dawkins, 30, advertised on Facebook with a flyer for “All good vibes. Leave the BS home.”

But the massive house party turned deadly Saturday when gunfire erupted at about 11:50 p.m., leaving three people, including Elliott, dead, and 11 more injured. The incident has garnered international attention and been labeled a mass shooting.

But just 10 minutes earlier, Ridgeway, 38, of Bridgeton, was dancing near the DJ booth, strobe lights flashing as guests in ’90s attire mingled in the large crowd, seen in a video Ridgeway shared with The Press. The party drew more than 300 people. Ridgeway said almost everyone knew each other or Dawkins.

“When I got there the party was jumping. Everybody was dancing, having a great time,” he said. “Seemed as if everybody was there to have fun. Everything just happened out of nowhere.”

'A lot of people got shot, and everybody is scared,' 911 calls from Fairfield party shooting show fear, chaos

“There’s a lot people shot. A lot of people got shot, and everybody is scared,” a frantic wo…

Details of the deadly night are still emerging, with recently released 911 calls illustrating the fear and hysteria that followed the gunfire just before midnight. Partygoers fled or hid and flooded Cumberland County dispatch with 911 calls.

“There’s a lot of people shot,” one caller tells a dispatcher, as shouts and cries can be heard in the background.

“We’ve had numerous calls, and nobody is giving us information,” the dispatcher states.

Ridgeway characterized the time after the shooting as “chaos,” and said he immediately dropped to the ground to avoid being hit by bullets.

“After I got up off the ground, I got up, looked around and saw (Elliott) down. And my first reaction was to help, and that’s what I did,” he said.

Because he was trained in CPR through his job, Ridgeway began the chest compressions on an unresponsive Elliott, whom he did not know personally. A video provided to The Press shows Ridgeway atop the body in a bloody scene as he performed chest compressions.

Elliott and a second victim, Asia Hester, 25, both of Bridgeton, were pronounced dead that night. A third victim, Braylin Holmes, 19, of Millville, died later at the hospital, according to State Police.

Two people have been arrested, but neither of the men have been identified by authorities as the shooter. Party host Darrell Dawkins, of Bridgeton, was charged with unlawful firearms possession after a gun was found in his car that was parked at the home at 1029 E. Commerce St., police said Tuesday. Also arrested was Kevin Dawkins, 36, of Bridgeton, whom police found hiding in the woods near the Maplewood Gardens Apartments about 1 a.m. Sunday, authorities said Monday during a news conference attended by Cumberland County Prosecutor Jennifer Webb-McRae, Gov. Phil Murphy and state Attorney General Gurbir Grewal. It is unknown whether the Dawkinses are related.

Although State Police have said this was a “targeted attack,” and some partygoers have hinted on social media and to reporters at other news outlets that there may have been a gang element, officials investigating the case said they could not confirm a motive.

Police also have not connected the shooting with two other shootings in Bridgeton on Sunday and Monday that had no reported victims. Bridgeton police this week said they found three spent .45-caliber shell casings in the driveway of the Burlington Manor Apartments at 10:50 p.m. Sunday. And then, at 8:20 a.m. Monday, police responded to the Maplewood Gardens Apartments for a report of a bullet hole in a car windshield with a witness saying the sound of gunshots could be heard about 1 a.m. that morning.

The deadly birthday party was the 25th reported shooting incident in the city since the start of 2020, according to Press archives, and the third of 2021.

In March, a 19-year-old woman was killed in her home in the Burlington Manor Apartments, and in February, a 31-year-old man was killed and two others injured at a shooting on South Avenue.

Ridgeway continues to be haunted by the events of last weekend.

“I have had sleepless nights,” he said. “I just keep replaying me on top of him doing CPR and hear myself counting out loud.”

He said what happened Saturday night shouldn’t paint a picture of Cumberland County as a whole.

“A couple bad apples affected hundreds of people for the rest of our lives,” Ridgeway said. “A couple people wanted to play God Saturday night and make it their decision to take people’s lives. It was absolutely a disgrace. … I just wish all this would stop. For Cumberland County to be so small and something this big to happen doesn’t make sense at all. Put the guns down.”

Anyone with information about the shooting can call State Police at 856-451-0101 or visit njccpo.org/tips. The State Police have a database for witnesses to upload cellphone video captured during the incident. Anonymous tips are welcome.

The Cumberland County Prosecutor's Office released the following list of resources for those in need of mental health services or experiencing trauma as a result of the shooting:

The Prosecutor's Office urges anyone in need of additional resources to call them at 856-453-0486.

BRIDGETON — They gathered in anger and frustration. They gathered after a bloody spring that has seen far too many shootings in this small cit…

A third person has been charged in the fatal house party shooting that occurred May 22 in Fairfield Township.

One person arrested in connection with Saturday shooting in Cumberland County

BRIDGETON — Authorities are looking for a Camden County man charged in a fatal shooting in the city last month, the Cumberland County Prosecut…

12:58 a.m.: Women spots someone in the area of Birch Street with a gun

Col. Patrick J. Callahan of the State Police speaks Monday at a news conference in Bridgeton on the Fairfield Township mass shooting that killed a man, a woman, and injured 12 others at a house party Saturday night.

Terence Ridgeway performed CPR in an attempt to resuscitate one of the victims of Saturday night’s fatal house party shooting in Fairfield Township.