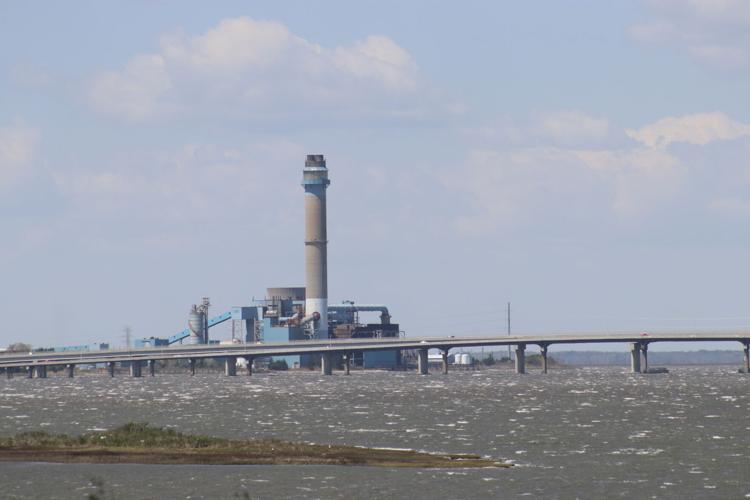 Demolition of the former B.L. England power plant in the Beesley’s Point section of Upper Township will likely take years, the new owners say. That work could begin next week. The new owners closed on the property on Monday for an undisclosed price.

Firefighters responded to the former B.L. England power plant earlier this month for a report of a trash fire. Members of the company had previously visited the site, where the new owners have begun a long process of demolition, in order to see what changes had taken place at the site.

The new owners of the former B.L. England power plant, the Beesley’s Point Development Group, plan to demolish the cooling tower at the site with an implosion on Thursday. The company released these images of the preparations at the site.

UPPER TOWNSHIP — Residents of the Beesleys Point section of the township are in for a big boom on Thursday morning as crews are expected to implode the cooling tower at the former B.L. England power plant.

The new owners of the plant, the Beesley’s Point Development Group LLC, say they’ve been working for months toward the demolition by implosion, set for 9:30 a.m. Thursday. That includes extensive asbestos abatement at the tower.

“Great care and preparation has been taken leading to the event to assure local and state compliance as well as the safety of the community,” reads a statement from the development group. That includes acquiring state and local permits and giving notifications to the State Police and Coast Guard. The state fire marshal has also visited the site, the owners said.

After months of preparation on site and notifying state and local agencies, the actual implosion will take about 10 seconds, according to Chad Parks, the executive vice president of real estate and development for the LLC.

The site will be entirely closed to the public that day, including a fishing pier on the Great Egg Harbor Bay which usually is accessible. Parks said the implosion should be visible from the pedestrian lane of the Garden State Parkway bridge over the bay, Parks said.

A series of small explosive packs will be placed in strategic locations within the structure, Parks said.

“It’s not going to take much to take it down,” he said. The tower is in disrepair, he said. There is not much use the structure could be put to, he said, but even if there was some alternative use, he said it would be in too poor a condition to allow it to remain standing.

There is no timetable for the demolition of the plant itself or the smokestack, he said, adding that the company is aware that some people hope to preserve the smokestack, which is often the first thing people see when entering Cape May County along the Garden State Parkway. He said the development group is still working on what to do with that structure.

With clear skies in the forecast, Parks expects the demolition to go ahead on schedule Thursday.

The plant dates from 1961, when the first diesel generators were installed. A year later, a coal–powered plant was added.

The cooling tower came later, installed in 1974. Cooling towers prevent power plants from heating up the nearby waterways, in this case the Great Egg Harbor Bay, which would otherwise impact the marine life around the plant.

The tower is 180 feet in diameter at the base and 208 feet tall, according to Department of Energy documents. For comparison, the Cape May Lighthouse is a little over 157 feet tall. The cooling tower may appear a little shorter standing next to the 475-foot smokestack nearby.

A statement from the owners said the timing was planned for when local children will be in their classrooms, not on busses or waiting for busses.

“The school children may (while unlikely) hear the event from their classrooms given the closest school is 1.27 miles away,” reads the statement. The closest home to the implosion is 3,250 feet, which means residents are not likely to feel any vibration, either, the company stated.

In addition to removing all asbestos, interior material, described as “packing” has also been removed. This lightweight plastic material has been taken to the county landfill, and the “guts” of the tower have also been removed, as described in the statement to the community.

A chain–link fence and fabric wraps the point of implosion to prevent debris from leaving the area.

There have not been any viewing areas for the demolition established, according to the owners. Boat traffic in the area will be regulated by the Coast Guard.

Firefighters were at the site early this month. The Marmora Volunteer Fire Company responded to the site on Sept. 7, when there was a fire in rubber-lined 24-inch pipes leading to the old scrubber unit at the plant.

There were no injuries reported.

After decades in operation, the plant ended operations on May 1, 2019. In November of last year, Upper Township officials announced that former owners RC Cape May Holdings had sold the location to the development company.

Chris Wilson and Tim Niedzwiecki are principals with Beesley’s Point Development Group LLC. Wilson is the company president. Niedzwiecki is the owner of the environmental and demolition firm ERSI in Syracuse, New York.

The company has not disclosed the purchase price for the site, which RC Cape May Holdings bought in 2007 for a reported $12.2 million. The holding company was an affiliate of Rockland Capital Energy Investments in Houston, Texas.

Also in 2021, the Upper Township Committee named the site an area in need of redevelopment, approving special zoning for the spot. Township officials have discussed the potential for a marina and 100-room hotel at the bayside site, which includes more than 300 acres. Parks said he could not comment on plans for the site at this time.

Some of the area includes protected wetlands.

In addition to commercial development, the property is also expected to be a landing site for power cables carrying electricity generated by the Ocean Wind offshore energy project to the power grid. That plan has drawn opposition from some residents and officials, with Ocean City raising concerns about the lines crossing the barrier island without local approval.

With garages used for storage, Ocean City may look to park cars under houses

OCEAN CITY — Most houses here do not have garages, but there are many throughout the beach town, either attached to houses or stand-alone stru…

A former coal-fired power plant in New Jersey was imploded Friday, and its owners announced plans for a new $1 billion venture on the site, where batteries will be deployed to store power from clean energy sources including wind and solar. The move came as New Jersey and other states move aggressively to adopt clean energy to combat climate change. Starwood Energy demolished the former Logan Generating Plant in Logan Township. That site, and a second power plant site in Carneys Point, will host large facilities where batteries will be arrayed to store clean energy and release it to the power grid as needed.

OCEAN CITY — Mayor Jay Gillian has called on regulators to ensure wind turbines could not be seen from the beach, a change that would require …

The plant, which included coal-fired and diesel turbines, closed in 2019, after which cleanup operations began. Last year, the site was purcha…

UPPER TOWNSHIP — Demolition at the former B.L. England power plant could begin as early as next week, but don’t expect the very visible coolin…

Demolition of the former B.L. England power plant in the Beesley’s Point section of Upper Township will likely take years, the new owners say. That work could begin next week. The new owners closed on the property on Monday for an undisclosed price.

Firefighters responded to the former B.L. England power plant earlier this month for a report of a trash fire. Members of the company had previously visited the site, where the new owners have begun a long process of demolition, in order to see what changes had taken place at the site.

The new owners of the former B.L. England power plant, the Beesley’s Point Development Group, plan to demolish the cooling tower at the site with an implosion on Thursday. The company released these images of the preparations at the site.